4 Historic Concert Venues Not To Be Missed In Croatia

Home > 4 Historic Concert Venues Not To Be Missed In Croatia

4 Historic Concert Venues Not To Be Missed In Croatia

It is no secret that Croatia is a country with a long and rich history and, Croatians are very proud to show it. You can discover old cities, castles, forts, amphitheaters, and ancient theaters all over the country.

All of these places are interesting to visit all-year-round –  but during the summer nights, they truly come to life; a lot of them become concert venues, open-air cinemas, and open-air theaters. 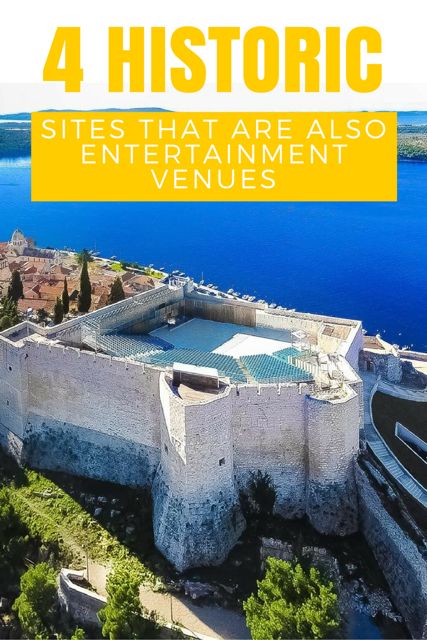 If you’re seeking  historic concert venues not to be missed in Croatia, here are four you shouldn’t miss:

The Arena in Pula

The star of historic entertainment venues in Croatia is most definitely is the Arena in Pula. The Arena is an ancient Roman amphitheater, 2000 years old, and still the best-preserved one in the World.

During the day, walking around the inside of the Arena allows you to feel the history; you can imagine the gladiators fighting and the crowds cheering them on.

During summer, the Arena transforms into a spectacular concert venue, with a capacity of approx. Twelve thousand people can host concerts of even the biggest Croatian and International stars and, as of late, several festivals. A

A concert in the Arena should definitely be added to your Croatia bucket list; seeing your favorite band perform here is s something you will remember for the rest of your life. The Arena has, for the last 60 years, hosted the Pula Film Festival during mid-July. During the Festival, many screenings and workshops are organized all over Pula. However, the main and most spectacular venue is and always will be the Arena. Two films are screened in the Arena each night of the Festival, and at least one of them is a novelty of Croatian cinematography and well-known international films. Subtitles in English have been added to all Croatian films – so it’s enjoyable for all.

Don’t miss out on watching a film under the stars in this fabulous venue!

Fort Minor on the Island of Mali Brijun

Near Pula, you can find another gem, Fort Minor, a perfect summer retreat for actors, directors, and theater lovers. Fort Minor was built in the late 19th century by the Austro-Hungarian Empire; it is situated on the Island of Mali Brijun, part of the Brijuni National Park.

It’s here that the Theatre Ulysses plays each July and August – and has done for the past 15 years. The founders of the Theatre Ulysses were the actor/director Rade Šerbedžija and the writer Borislav Vujčić. To-date, Theatre Ulysses has hosted many local and international theater plays and many concerts mainly performed by regional musicians and bands.

Pieces performed here vary from classical to modern, from regional to international. Everyone can find something for their own taste. To make it all even more special, only a limited number of people can access the venue. All ticket holders are taken by boat from the nearby town of Fažana to the island of Mali Brijun to experience the magical nights in this open-air theater.

Fun fact: Over the years, Brijuni Island was the summer vacation spot for many international actors such as Vanessa Redgrave, Ralph Fiennes, and Amanda Plummer, to name a few.

If your summer destination in Croatia is Dalmatia, something you shouldn’t miss is the Fort of St. Michael, or as the Croatians call it, Tvrđava svetog Mihovila, in Šibenik.

Historical books first mention this Fort in the 11th century when it was the residence of the Croatian king Petar Krešimir IV. Through the centuries, this Fort has been a place of many battles, an important point for the defense of Šibenik and the surrounding areas, today it is a home to music and culture. After the completion of extensive work on restoring the Fort in 2014., an amazing open-air stage opened its doors to the

After completing extensive work on restoring the Fort in 2014, an amazing open-air stage opened its doors to visitors. The capacity of the open-air stage is approx. 1000 seats, and it hosts musicians, both international and regional, operas, film screenings, the Šibenik Dance Festival. There is always something happening on stage at St Michael’s Fort from mid-June to mid-September. This medieval fort is a truly amazing way to spend a summer evening in the beautiful city of Šibenik; check out the open-air stage program when in town and treat yourself to an evening to remember.

Dubrovnik is probably the most famous Croatian city. Photos of the city have traveled around the globe showing the beauty of the Old Town, the walls, churches, and the castles. Those are all mostly images of Dubrovnik by day, but not much is said about Dubrovnik by night, especially during the summer, and that is something you simply must experience. The best time to do that is from

The best time to do that is from mid-July to the end of August, during the Dubrovnik Summer Festival. The Festival has a 67-year-old tradition of turning the whole city literally into one big stage. Forts, palaces, churches, monasteries, parks, surrounding islands, the streets of the Old City all turn into venues for concerts of classical music, theater plays, film screenings, operas, ballets, exhibitions, poetry readings.

Every night of the Festival, something is happening on at least one of the stages. You should definitely take a good look at the program and choose what you’d like to see. Choose wisely as some evenings have multiple stages holding events simultaneously, and beware, tickets tend to sell out fast.

Local tip: If you are the type of traveler who likes to get to know the cultural heritage and tradition of a city, don’t miss the Linđo Folklore Ensemble perform in front of St. Blaise’s Church or on the Revelin Fort Terrace.

So, now go forth and enjoy the historical and ever-entertaining Croatia.