Best Things To Do In Šibenik, Croatia

Home > Best Things To Do In Šibenik, Croatia

Best Things To Do In Šibenik, Croatia

Written by Bram from the travel blog Travel. Experience. Live and the Chasing the Donkey team.

A coastal city that has endured nearly a millennium of scorching temperatures, sustaining a few wars, being beaten by the waves and whipped by relentless winds, Šibenik remains as vibrant as ever. How did it survive?

For one, its residents are incredibly resilient, for neither war nor climatic event could prevent them from saving and, if necessary, rebuilding their city. Second, the entire city is made of stone, which, of course, helps a lot.

Šibenik consists of stone buildings, stone stairways, rock cliffs, cobbled streets, and stone arches. It is built on rocks and constructed with rocks. Šibenik is a city of sun, sea, and stone, a unique combination of characteristics that make this a city unlike any other in Croatia.

Additionally, this proud city is the only one on the Croatian coast built by Croats—Split and Dubrovnik, for example, were founded by other cultures.

As the third-largest city in Dalmatia, Šibenik makes a strongly recommended destination on this spectacular stretch of Adriatic coastline. This city is filled with incredible historical sites, beautiful seaside hang-outs, and quaint alleys and squares—just what you may expect from a medieval coastal city in Croatia. 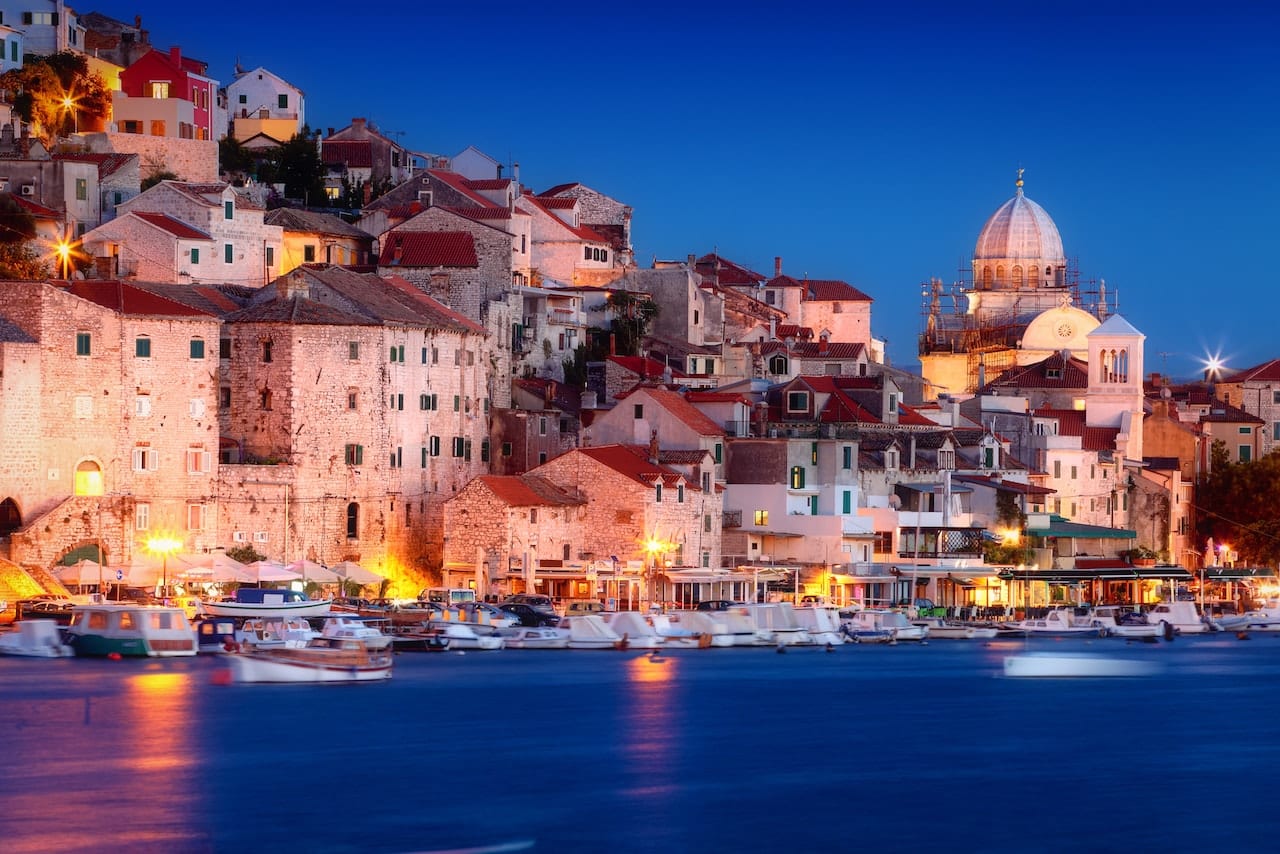 So grab yourself a room at one of these incredible accommodations in Šibenik, then head out to see these sights!

A strikingly harmonious Renaissance building situated on the Republic of Croatia’s medieval Square in the very heart of the city, the City Hall of Šibenik, was constructed between 1533 and 1546. Its beautiful façade is made up of columns and arches, a balustrade, and a balcony. The ground floor is home to a wonderful local restaurant, the outside terrace of which provides an extraordinary view of the Cathedral of St. James (see below).

Although the City Hall was entirely leveled during an allied air raid in 1943, it was meticulously rebuilt and now looks exactly like it did before World War II. 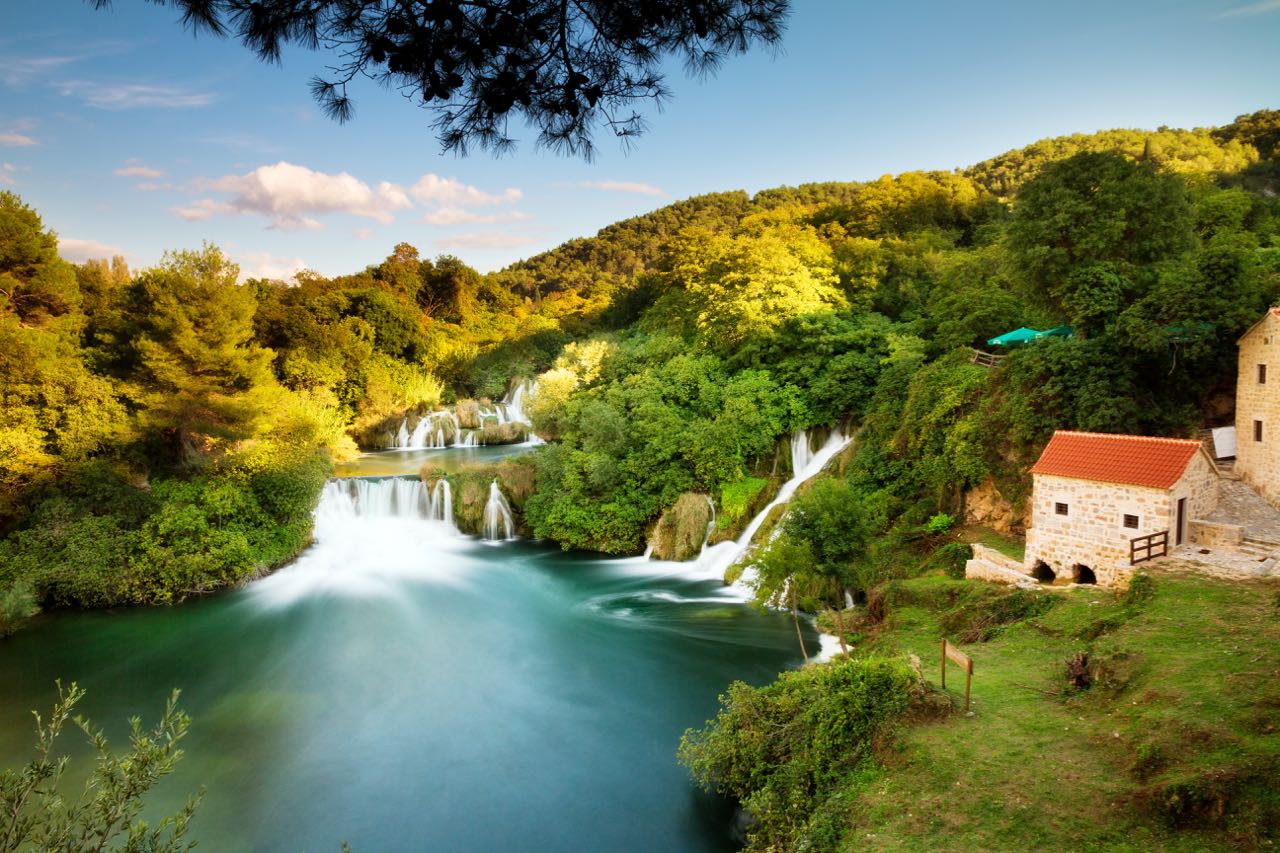 Not technically located within Šibenik, but definitely close enough to be considered a local highlight, Krka National Park lies merely a few kilometers to the city’s northeast—about 15 minutes by car from the city center. This superb national park protects a section of the Krka River and the woods that occupy its banks. It is truly exceptional in the sense that it’s a national park for more than one reason. The many activities in the park range from educational and scientific to recreational, touristic, and cultural.

What sets this park apart is its large number of waterfalls and cascades, most notably Skradinski Buk. Krka National Park’s star attraction, this downright spectacular waterfall, can be seen on boardwalks that encircle it—and lead visitors past, over, and along many other waterfalls, streams, and lakes. Moreover, you can swim in the natural pond underneath the waterfall, which is absolutely amazing—swimming is, for example, not allowed anywhere in Plitvice Lakes National Park, a similar but more famous and more popular Croatian national park.

There are a few entrances to Krka National Park, but the recommended one—that is, the one closest to Skradinski Buk—is the Lozovac entrance. The entry is clearly signposted along all approaching roads, the main one of which is the A1 expressway. There’s free parking.

A fun thing to do in Šibenik is walking around aimlessly. Its medieval heart is completely car-free—the streets and alleys are too narrow for car traffic—and allows people to explore, discover, and wander at their leisure. The historic city center comprises a few different areas, known as Grad, Dolac, and Gorica, which all neighbor one another.

These areas are chock-full with historic sites, ranging from ancient churches to palaces and mansions to townhouses. Everything, of course, is made from stone. A maze of paved and cobbled streets connects all these attractions; sometimes, the streets pass underneath a beautiful arch or even through a tunnel. Because the city was built on a rocky coastal area, there are some elevation changes as well, which are conquered by—you guessed it—stone stairways.

Šibenik has always had a strategic position in the Adriatic Sea. This military advantage made it a much-desired city by the larger Mediterranean powers. The city rulers anticipated that and erected several mighty fortresses, built fortified city walls, and constructed commanding towers. Nowadays, the fortresses are the best-preserved remains of this once-mighty fortification system.

There are four fortresses in the city of Šibenik—the Fortresses of St. Nicholas, St. John, and St. Michael, and the Fortress Šubićevac—all of which were built between the 15th and 17th centuries. 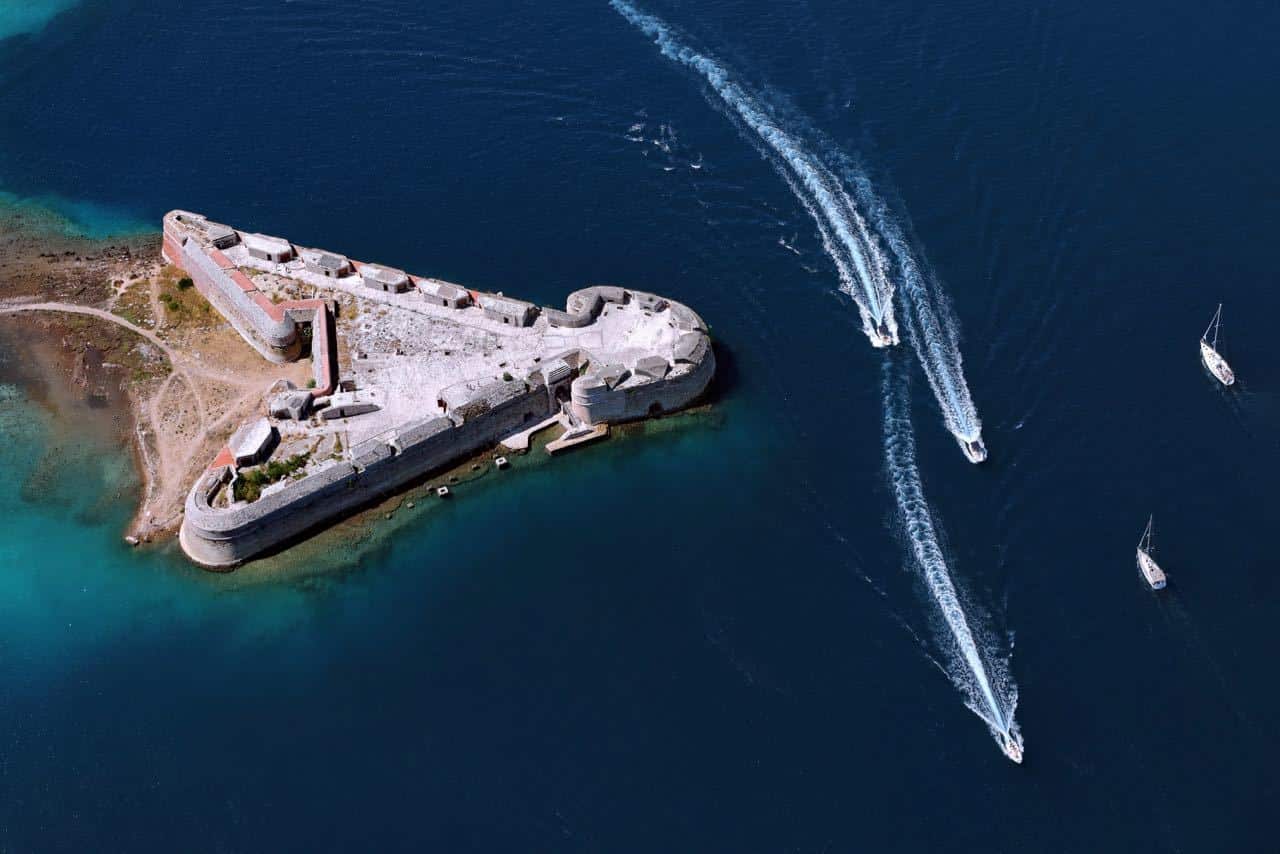 While they are all definitely worth visiting, the Fortress of St. Michael is imposing because it houses a concert and theater venue at its top. Overlooking Šibenik and the islands in the Adriatic Sea, it is one of the most scenic places to attend a performance in Croatia.

The number one attraction in Šibenik is the Cathedral of St. James. A stunning and stylish building, this magnificent cathedral was built in the 15th and 16th centuries and can be said to be one of the most significant monumental cathedrals in Europe. It wouldn’t be Šibenik if its cathedral weren’t built entirely from stone—in fact, it is the only cathedral in all of Europe that has been constructed with only stone. And did you know it was featured on Game of Thrones?

Additionally, it was also the very first structure in Europe to be constructed with inter-grooved stones. And that’s not all. The Cathedral of St. James is also the only European building whose interior shape corresponds entirely with its exterior features. It would by no means be a stretch to state that the Cathedral of St. James can be considered to be the most important Renaissance building in Croatia.

It is truly an absolutely extraordinary building, a vast stone monument that is one of the top sights on the entire Dalmatian coast.  UNESCO recognized this cathedral’s cultural, architectural, and historical significance when it declared it World Heritage in 2000.

There is an abundance of things to see in Šibenik out of the old town, and it has loads of great places to stay, making it a great place to spend a few days.

There are about 20 historic towns along the coast. The better-known ones include:

Plus, the three largest inland towns in the Dalmatian hinterland are:

Many islands, many close to the mainland, make Šibenik a lovely place for sailing. Six islands are inhabited, car-free (suitable for bike riding), and accessible by ferry, except Murter, which is connected to the mainland via a moveable bridge.

As you might expect, the rich culture, history, natural wonders, beautiful beaches, and hundreds of islands provide many things to do in the Šibenik region. Šibenik shares some of its natural landscapes with the neighboring Zadar and Split counties. How is it different from its Dalmatian counterparts, like Zadar, Split, and Dubrovnik?

For starters, it’s blessed with:

The Šibenik region is home to 14 fortifications and fortresses:

How To Get To Sibenik

One thing I love about Šibenik is that it’s perfectly central. I find most people I know agree. Šibenik has a central bus station, very well connected to other bus ports around the country. Buses are really easy to get around on if you don’t have a car.

From Šibenik, Skradin and the entrance to Krka National Park’s main waterfalls (Skradinski Buk) are half an hour away, inland by car. Via the A1 (also called the E65):

By car it takes:

Bus:  Intercity buses are very accessible in Croatia. Wherever you are in the country, you’ll be able to reach Sibenik by bus.

Did we miss your fave spot in Šibenik? If so, what other things to do in Šibenik would you suggest to anyone going there?