Carnival In Croatia And The Best Places To Go!

Home > Carnival In Croatia And The Best Places To Go!

Carnival In Croatia And The Best Places To Go!

Croatia Carnival or Maškare season is coming up in Croatia, so it is the perfect opportunity to start planning your Croatia itinerary and visit some astounding Carnival destinations in Croatia.

Croatians are known to take their carnival very seriously, as every region, city, and village in Croatia, regardless of their age, participates in the spirit of Maškare. According to ancient legends, this is a centuries-old tradition that goes back to ancient times when ferocious masks kept away the forces of evil.

I have had the opportunity to visit all three of these carnival spots during the Croatia Carnival season, each of which had its own unique and ancient traditions. In each city, the organizers spent an entire year putting together an exciting program with various events and performances for visitors that come from all over Croatia and abroad.

Samobor is a small medieval city, about 23 km from Zagreb. It has impressive nature, historical sights, art galleries, cool architecture, and the best Kremšnite in Croatia. Samobor is known as the city of artists, whereby very famous writers have come to Samobor searching for peace, quiet, and inspiration in the surroundings.

Samobor is known for their Carnival – called the Fašnik. The Fašnik is organized every year from mid-February until the last day of February. Thousands of visitors come to Samobor during Fašnik simply because it has many exciting events where people dress up in various costumes and masks, which they have been carefully preparing for the entire year.

The Fašnik is a large ragged doll representing some form of modern society, for example, an unpopular political figure, who is blamed for every bad thing that has happened in the city during the previous year.

On the Carnival’s final closing ceremony, the Fašnik is burned on the main square, symbolizing the burning of all the bad things that happened that year.

Fašnik is one of the most popular tourist attractions in the city of Samobor. The Fašnik features many traditional festivities and events, including musical performances, various entertainers and dances, best mask contests, Children’s Carnival, and finally, the closing procession and burning of the Fašnik.

Visitors will also be able to enjoy several delicacies that are sold on the nearby stands in the center square, including various sandwiches, cevapi, sausages, fritule, beer, kremšnite, American doughnuts, wine, and so much more. Many stands also sell homemade products, such as honey, local sweets, meats, grappa, oils, and souvenirs.

The Carnival In Opatija

Opatija has the oldest tourism tradition in Croatia – more than 170 years of a service-oriented culture. Opatija is one of Croatia’s most famous destinations.

This is no surprise. It is a beautiful Riviera, offering many kilometers long promenade and fascinating, unique Austro-Hungarian-inspired architecture.

For centuries Opatija has had a very strong Carnival culture, dating back to 1511, when the Zvončari used to dress up as wild animals at the beginning of February, wearing colorful hats, and went out into the forest to try and scare the Turkish soldiers.

The people of this region created the Carnival Parade in Opatija. The locals used the Carnival to share their culture and ancient traditions with visitors; thus, the Carnival becomes a part of Opatija’s touristic offering.

The Carnival preparation is a long process; it lasts an entire year – starting on the day of the closing ceremony of the parade the previous year. The preparation consists of costume design and creation, construction of the cars for the Balinjerada race, preparation of the masked dances (Pusni tanci), and the organization of the many other events, contests, and performances. The contests offer prizes for the best masks, including best-masked duo and best-masked groups.

Opatija is known for its five-star hotels and high-quality service, but it is also known for the spectacular shows the locals put on during the Carnival season. So if you planned on visiting this lovely little city, I would highly recommend visiting during the Carnival season – the weather is mild, the city is lively, but not too crowded, and it offers lots of fun events and laughter for families people of all ages.

The Carnival begins on January 17, where an opening ceremony is held at the main town square, and the mayor hands the key to the city to the carnival mayor. During the ceremony, the Carnival flag is raised, and the symbolic Pust (a mocking puppet, representing all the bad things that happened during the past year).

Following the opening ceremony, the Carnival season officially begins. Every week thereafter (until the closing ceremony), many events are held in the city to celebrate the Carnival season. Some events include the Children’s carnival parade, which takes place on the second Sunday of February. During the parade, hundreds of children from all over Croatia and abroad come to this event; all dressed up in unique costumes and masks.

The carnival represents the culture, tradition, and gastronomic offering of the Opatija Riviera. When in Opatija, do not forget to try some of the best local delicacies, such as ulenjaki, presnac, fritule, and other specially prepared foods for the Carnival.

Other fun and popular events that take place during the Carnival include Masked Klapa Marathon, Masked ball, and the famous Balinjerada parade.

The Balinjerada is the Carnival Parade race with self-made vehicles on ball-bearing wheels. This is an event that has been happening in Opatija during the Carnival season for the last 30 years. The race occurs on Opatija’s main street, and it is a real treat to all the visitors and spectators strolling along the streets of Opatija.

The contestants’ goal is to show off their driving abilities and impress the crowds and the judges with their masks of modern-day personalities and mock them with unique masks and costumes.

The closing ceremony of the Carnival takes place on the Sunday before Ash Wednesday. The final ceremony is the Carnival’s biggest event, whereby the Carnival Flag is lowered, and the crow says its final farewell. The preparations for next year’s Carnival begin!

I save the best for last! Or shall I say the biggest for last! Rijeka Carnival in Rijeka is the Carnival capital of Croatia. This is the most popular and the biggest carnival parade in Croatia. It is an international parade. The carnival in Rijeka has been around since the middle ages, and people from Rijeka actually refer to it as the “fifth season” of the year. The Carnival is a part of Rijeka’s culture; they live it with their whole heart and soul. Be it rain or shine, wind or snow, the Carnival season is on!

What makes the Rijeka Carnival so unique is that it is a member of the Federation of European Carnival Cities. During the Carnival season, there are many entertaining events of cultural, traditional, and sporting nature. It is its own unique brand, similar to what the carnival is in Venice.

The Master holds an election of its carnival Queen during an event called Master and the Queen contest, where women (regardless of their age) are all dressed up with unique masks and take on a life of their character. Interestingly, each woman is part of a larger group, who have their own fan base – just as if it were a sports team, with fans cheering on their favorite group.

Following the show of the group, each contestant appears on the stage, and the Master of Rijeka Carnival pairs up two people who are responsible for spreading the good news about the Carnival and about its city.

Some of the fun events include contests for the best masked, most beautiful, most cheerful, and so on. The carnival comes to life in every aspect of the city, the local restaurants with masking the personal and the menus, carnival park, parking lot, carnival tents, and the Theatre Merry Go Round. The carnival spirit comes to life in galleries, concert halls, sporting grounds, tournaments, schools, government institutions, and so on.

The Carnival officially begins on the 17th of January and lasts until Ash Wednesday.  The most popular events include the Children’s Carnival Parade on Rijeka’s main street Korzo, the Rally Paris – Bakar, whereby all participants of the rally wear masks with old vintage cars, and the Big International Rijeka Carnival Parade, which is the biggest and the most popular event of the Carnival. Over the last few years, the Big parade has grown to over 150 carnival groups, reaching as many as 150,000 people. 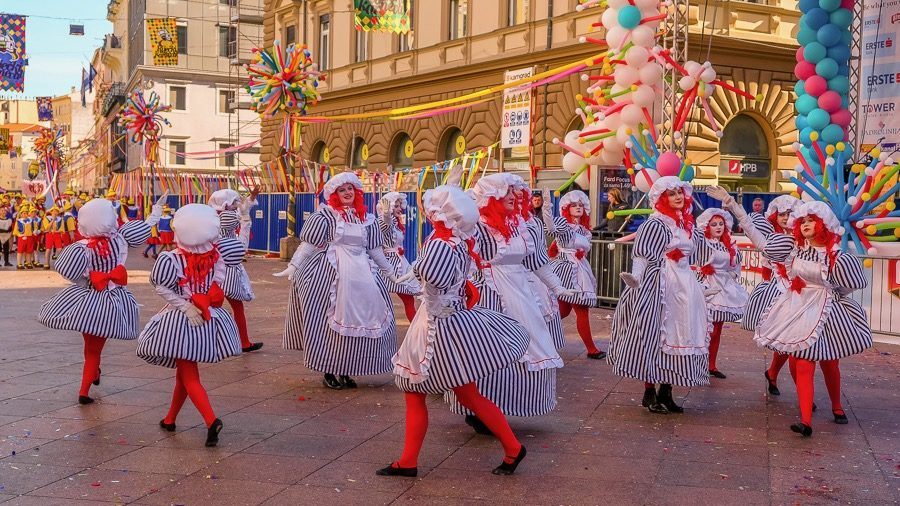 The International Carnival Parade is the sublimation of everything that preceded it during the “fifth season.”  This Parade is held on the last Sunday before Ash Wednesday. The real Mayor and the Master, and the Queen of Carnival are in attendance, and they greet every group that participates in the march.

Following the big march, there is an event held at the Rijeka harbor called the burning of the Pust. As with most Carnivals in Croatia, the Pust is a puppet; it reflects the mocking of some public figure; most often, it is a politician that has not been so popular. 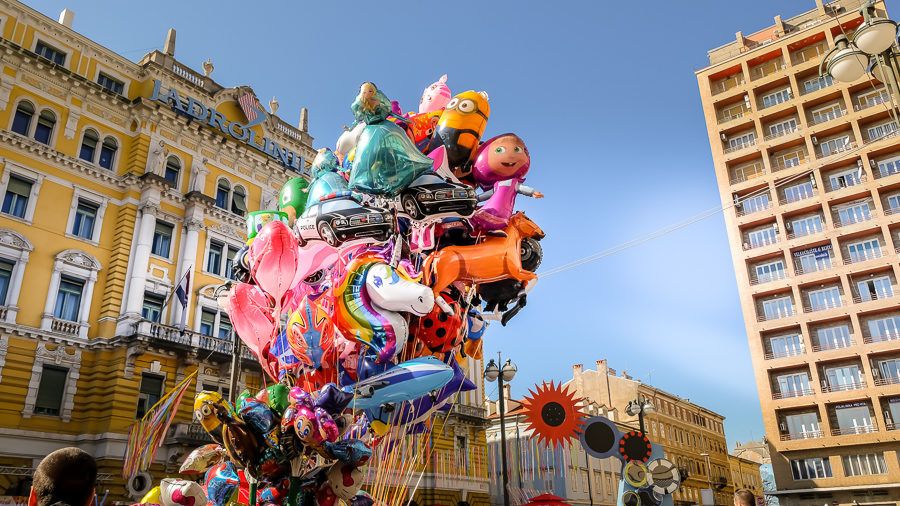 The evening of the Big parade is completed by the traditional Humanitarian Ball organized by the City of Rijeka, which is held at the Governor’s palace. Many famous people, such as sports figures, media figures, heads of states, consuls, and other high-level government officials from all of the continents, attend the famous ball. Throughout history, the ball had the presence of Austrian and Hungarian aristocrats, Russian princesses, German barons, earls, and countesses from all over Europe.

During the Big parade, all the hotels are at full capacity, with many busses, trains, and boats transporting hundreds and thousands of people into the city.

The Big Parade’s final day is when the preparation for the next year’s Carnival in Rijeka begins. Carnival groups start to think about their new costumes and how they will impress the crowds more so than the previous year. 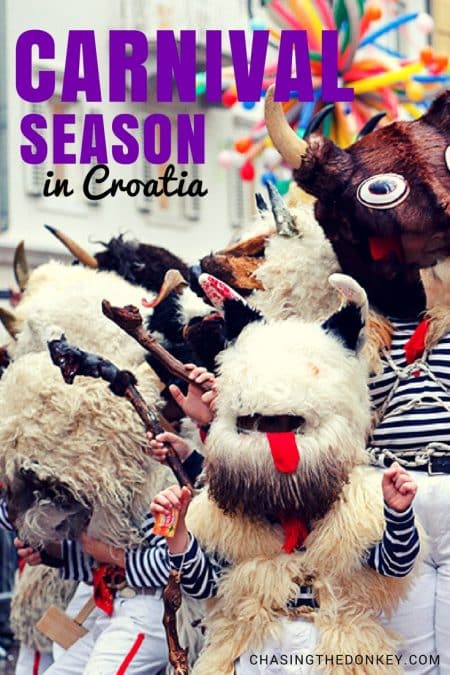 Carnivals are popular all over Croatia. Every city and small town has its own Maškare/Carnival, composed of smaller events, parades, musical performances, children’s performances, mask contests, and so much more. Croatia is an all-season destination, so do make sure to consider visiting for next year’s Carnival season and enjoy the many Carnival events and parades offered across the country.

Which carnival will you try in February in Croatia?