Super Fun Ideas For The Best Day Trips From Zagreb

Super Fun Ideas For The Best Day Trips From Zagreb

If you fly to Croatia, the chances are that you’ll either leave the plane in Zagreb or have a layover in the city.

Zagreb is a super-convenient city to start an Adriatic or Balkan road trip, located centrally and near many of the region’s most fantastic attractions. While some people do get off in Zagreb and spend some time exploring the city, they run off before exploring places to visit near Zagreb. 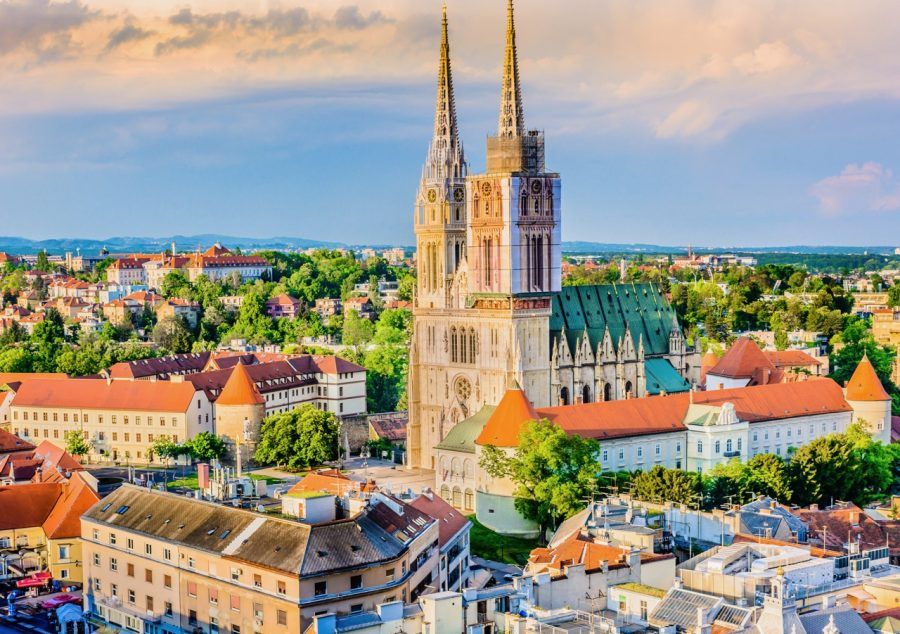 After sightseeing and before heading out to a new destination, consider going on one of the following recommended day trips from Zagreb. You can rent a car, hire a driver, take public transportation or join an organized tour to one of the destinations below. 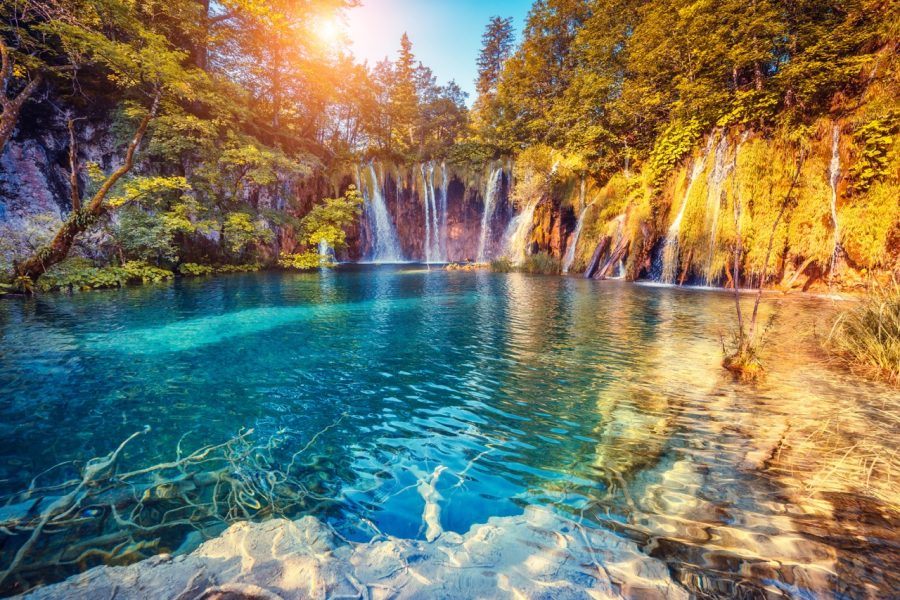 If you only have time for one day trip from Zagreb, let it be to Plitvice Lakes National Park. Although this is a rather large park, its main attractions can be explored conveniently in one afternoon.

Several terraced lakes flow into one another in a beautifully wooded gorge in a series of waterfalls and cascades. This landscape, unique in Eur, also has a notable human history.

This combination is the main reason why Plitvice Lakes National Park is a UNESCO World Heritage Site nowadays. Boardwalks wind their way over and around the lakes and waterfalls, allowing you to see everything from up close.

The day trip from Zagreb to Plitvice Lakes is no longer than two hours. However, there is so much to see and do here that we suggest setting aside a day to explore the lakes and drive back from Plitvice to Zagreb before it gets too dark.

You’ll want to take your time to enjoy the sheer natural beauty of this area, so you could also consider a tour to maximize your time and not stress about the return drive. There are plenty of companies that offer a day trip to Plitvice from Zagreb.

Don’t miss our guide on how to get from Zagreb to Plitvice Lakes.

Rastoke is conveniently on the way between Zagreb, and Plitvice Lakes National Park, the small town of Rastoke is a popular place to stop. Rastoke is the old town center of Slunj, filled with historic buildings and boasting surprisingly beautiful nature – the most perfect of perfect Zagreb day trips for nature lovers.

Situated at the confluence of the Slunjcica and Korana Rivers, the town’s star attraction is its combination of waterfalls and watermills. It’s sometimes called “the small lakes of Plitvice” for a reason. Much less crowded than the nearby national park, Rastoke features similar landscapes of cascading waterfalls.

Its watermills are incredibly picturesque, and because it’s small enough to be explored in less than two hours, you’re encouraged to include Rastoke in your Zagreb to Plitvice Lakes National Park itinerary or even as a pit stop on your road trip from Zagreb to Split.

One of the northernmost towns in Croatia, Zagreb to Varazdin, is less than a one-and-a-half-hour drive each way and is an easy Zagreb day trip to make. Its location in the far north of the country keeps it off many visitors’ radar, adding only its appealing quietude.

For such a small town, Varazdin has many highlights. Once Croatia’s capital, the town is now a stunningly well-preserved Baroque town. Make sure not to miss Trg Kralja Tomislava, home to the Draskovic PalaceAlso, the Cathedral is also a sight worth seeing. Additionally, definitely also visit the Stari Grad Fortress and the City Museum.

From Zagreb, you can get to Varazdin by car and bus. The latter is a convenient option if you don’t want to rent a car. If you do rent a car, you’re strongly encouraged to make a detour to Trakoscan Castle, one of Croatia’s most beautiful and most visited castles. 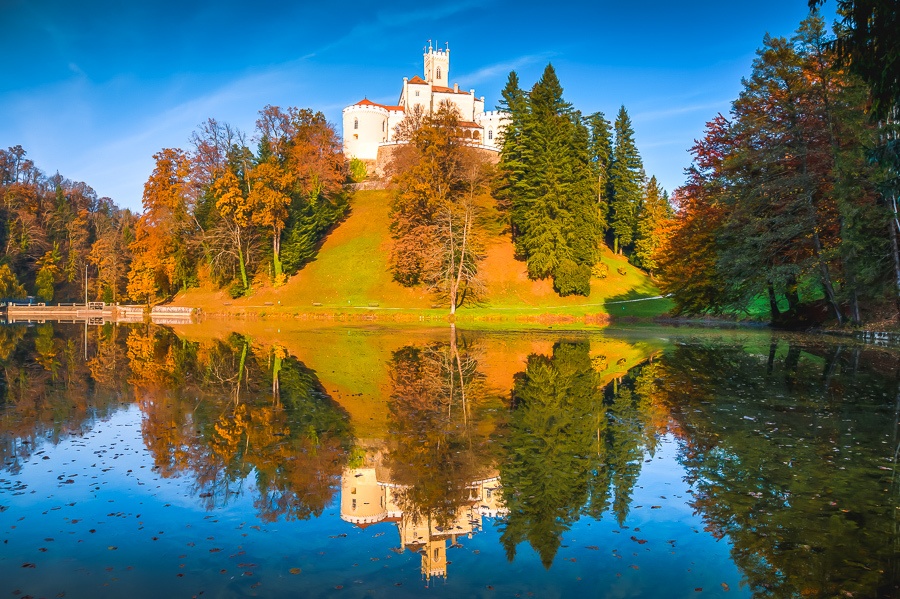 Atop a steep hill in Hrvatsko Zagorje, Trakošćan Castle is perhaps the most famous castle in Croatia. It overlooks a human-made lake and bountiful gardens, making it one of the best places to visit from Zagreb.

Trakošćan is less than an hour’s drive from Zagreb, the pilgrimage town of Maria Bistrica, and within minutes of the baroque city of Varaždin. Because it is so close to Zagreb, we strongly encourage you to go for a day trip there. There’s plenty to see and do en route, too.

Built in the 13th century, the original owner is still unknown, but the castle is believed to have been constructed as an observation fortress. Over the last nine centuries, many people owned Trakošćan Castle at some point. It currently belongs to the Croatian government and is one of the best-preserved castles in Croatia. You can visit a great museum with a permanent collection of paintings, furniture, and other display items.

As you walk through the museum, you are taken back in time. You’ll gaze into the eyes of ten generations of owners, spanning three centuries, whose faces are now portraited paintings. This living museum has fully set dining tables, study areas, and bedrooms complete with antique linens. Daydream as you meander along the circular staircase, which winds down and around the castle from the hunting room at the top all the way to the basement kitchen.

Well, the town’s main feature is that it’s the birthplace of Josip Broz Tito, the army commander who later became the founder of communist Yugoslavia. The house where Tito was born, nothing fancier than a basic peasant home, was converted into a museum during his lifetime. In the decade’s aftermath, the surrounding buildings were renovated and reconstructed. It’s also considered to be the best museum village anywhere in Croatia.

Now, the town of Kumrovec is a superb example of what a 20th-century Zagorje village looked like. As it’s called, the Ethnological Museum encompasses eighteen historic village buildings, with permanent exhibits displaying artifacts and furniture. This is a superb destination option for Zagreb day tours if you’re into history and local culture. 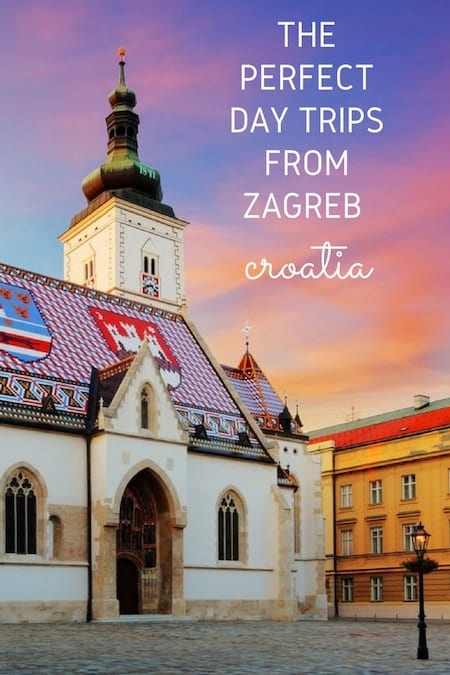 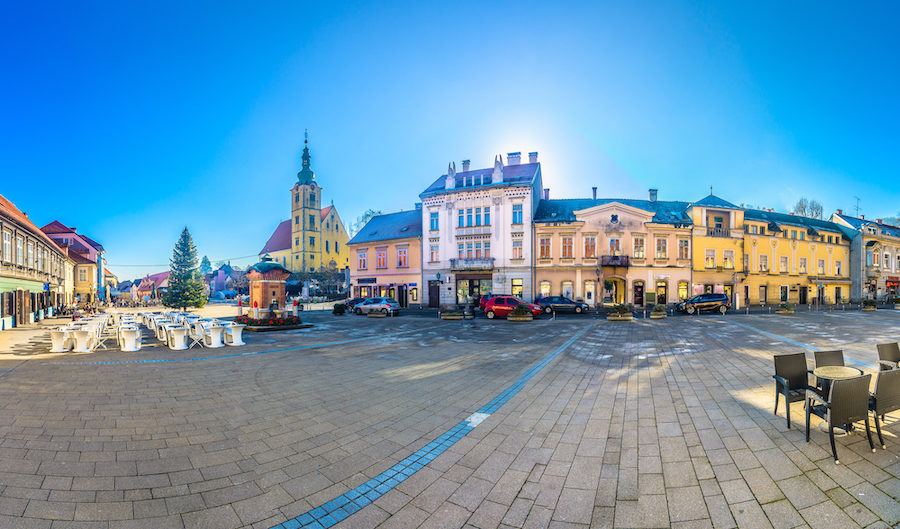 The nearest and most accessible day trip from Zagreb is probably Samobor. Situanly twenty kilometers to the west of the city, it’s easily reached by both car and bus. So, if you are time-poor – this is the choice for you.

Samobor is worth visiting for two main reasons—its architecture and its famous custard cake. The latter is known as Samoborska Kremsita and is said to be the best in all of Croatia. Make sure to try a slice.

Besides that, Samobor boasts lovely historic highlights, including the Stari Grad Castle, the City Museum, and St. Anastasia and St. Anne Churches. 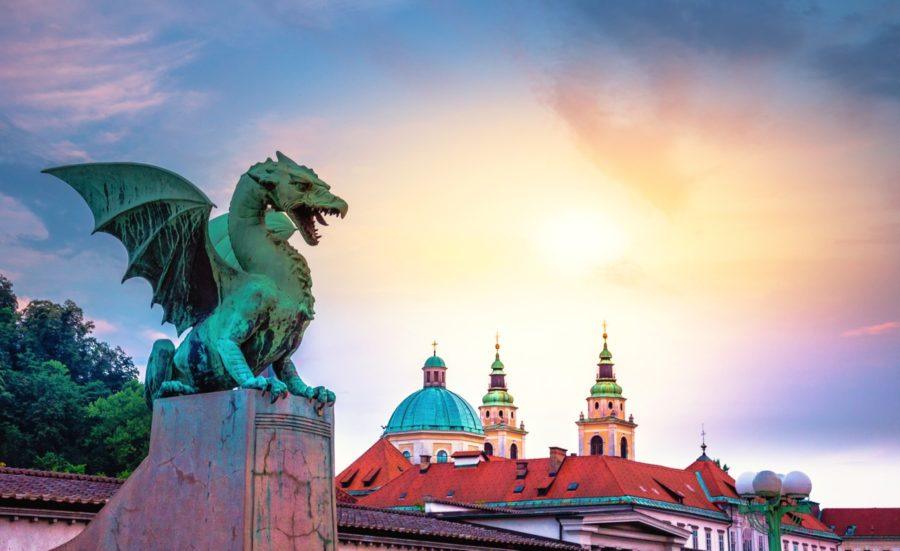 The capital of Slovenia, Ljubljana, is one of Europe’s greenest and most livable capital cities. You’ll unquestionably see why on your Zagreb day trip to Slovenia.

The beauty of the Balkan region is that it’s home to a wealth of historic cities, all located within an easy driving distance from each other. In fact, Zagreb lies only about 35 minutes from the Slovenian border, visiting Ljubljana a breeze.

The drive from Zagreb to Ljubljana doesn’t take longer than two hours (but in peak times of the year, border patrol can make that twice as long). Make sure to bring your passport!

An evening walk along the tree-lined Ljubljanica River is highly recommended as well. The city is small enough to be explored in just one day, the ideal city trip from Zagreb—if you can, you should try to spend at least a night there. 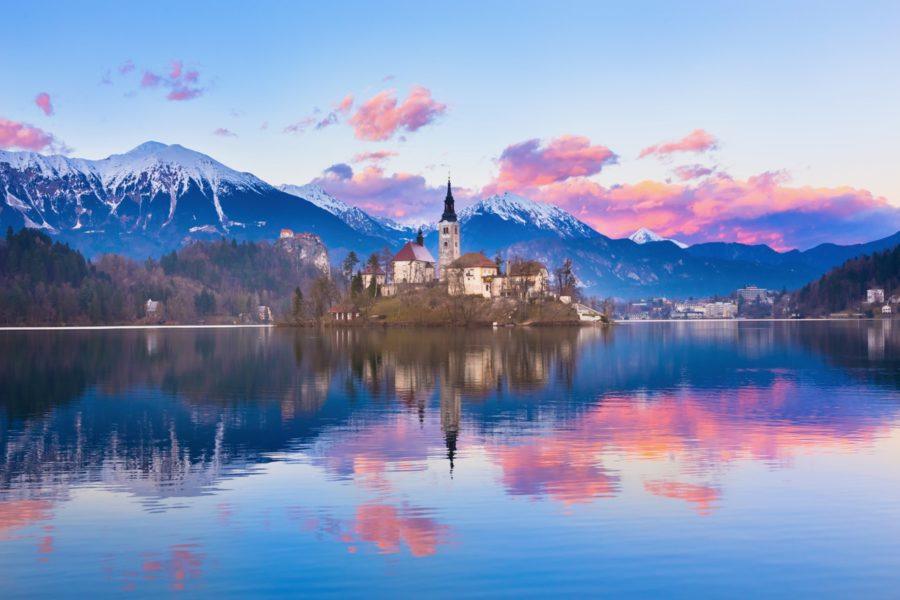 Past Ljubljana lies Lake Bled. This iconic and extremely popular tourist destination is often included in group tours to Ljubljana from Zagreb. This lake, surrounded by tall mountains, Bled Castle, and its small picturesque island, is mesmerizing.

Bled is another place in the Balkans that’s exceptionally beautiful, but of which you can quickly get a feel in just a few hours.

If you want a change from the hustle of city life in Zagreb, consider going to scenic Lake Bled. On a Lake Bled day trip from Zagreb, you will find beautiful hiking trails around the lake and into the mountains, fascinating historical attractions, and a charming small-town atmosphere. 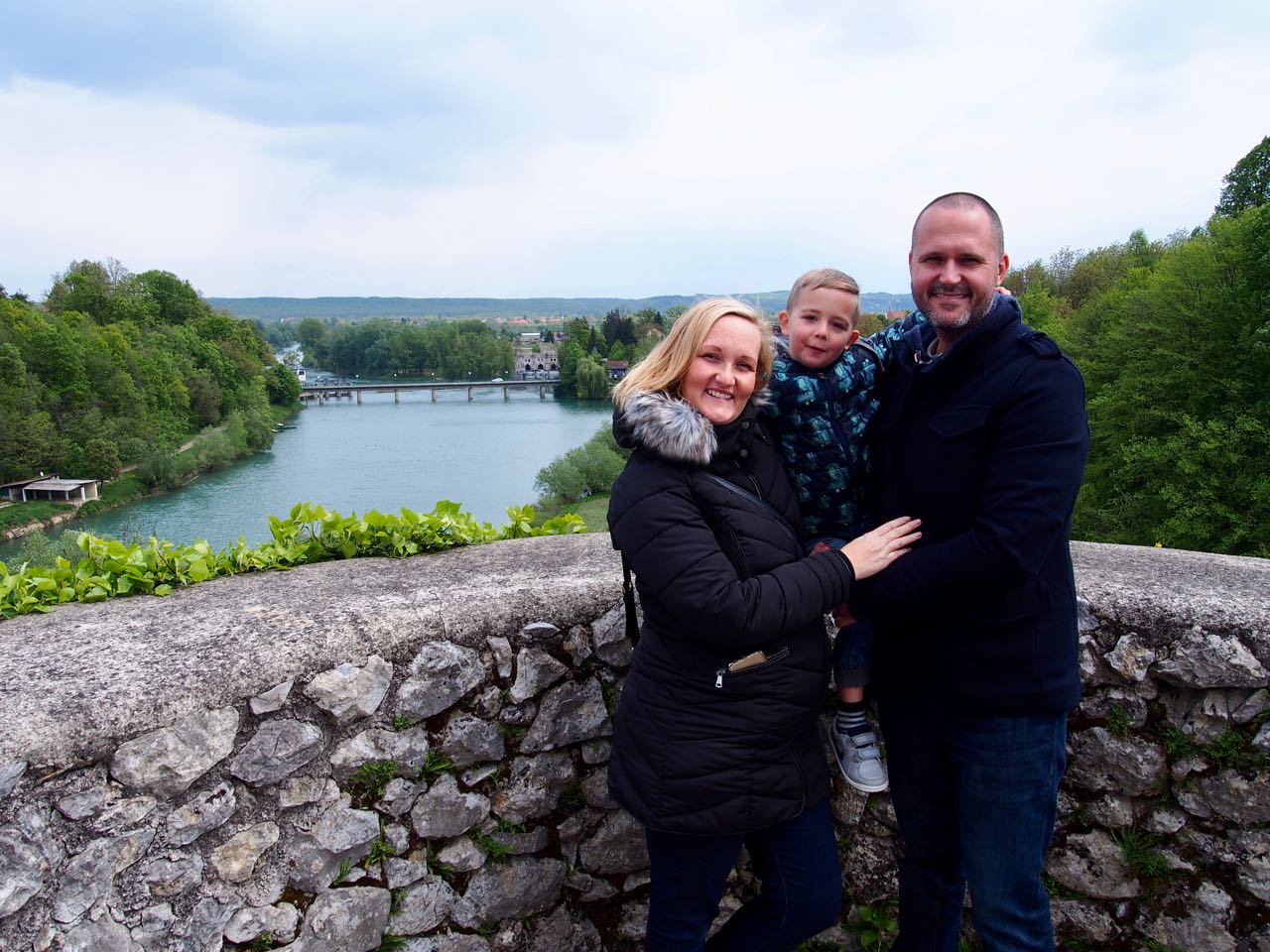 One of the best day trips from Zagreb if you’re looking for an off-the-beaten-path destination, Ozalj sits on the banks of the picture-perfect Kupa River. It has a rich and glorious past, which becomes evident as soon as you gaze upon the Ozalj Castle. This imposing fortress overlooks the river and is one of the top castles in Croatia. Ozalj Castle is a fascinating museum that houses art, ancient pottery, and medieval military weapons.

The Old Town of Ozalj is in the County of Karlovust, 55 kilometers from Zagreb, and an easy day trip b, train or public transport. In addition to the castle, you can also visit the St. Vitus Church and Ethno Park Trg and drive the incredible wine roads of Ozalj-Vivodina-Vrhovac. This is one of our favorite Zagreb day trips because of the area’s rural charm, notable historic sites, and great food.

There are even more options for Zagreb day trips, great overnight getaways, and Croatia road trip ideas, but we’ll save those for another day.

When you’re ready to leave Zagreb, consider Dubrovnik. This guide will get you there.

Now that you have a few ideas for one day trips from Zagreb, we hope you enjoy your vacation.