Best Museums In Albania To Visit

One of the earliest inhabited regions in Europe, Albania, has been the home of the Illyrians, Thracians, Ancient Greeks, Romans, Byzantines, and Ottomans. Although other countries like Italy and Greece are much more well-known for their heritage and history, Albania does come pretty close. This is a place where you can immerse yourself in centuries-old cultural traditions and visit amazing historic sites for weeks on end.

Albania is also a nation that’s been through quite a lot of change recently, including World War II, the Communist Era, and the transitions to capitalism. As such, some of the Albania museums featured in this post offer a superb insight into those 20th-century periods from a perspective unknown to “Westerners.”

This rich history and cultural diversity are why there are so many great museums in Albania. Sure, when thinking about Albania, your mind might first go to the phenomenal national parks, the glorious beaches of the Albanian Riviera, or the remarkable nightlife of Tirana. But the following best museums in Albania definitely add an extra dimension to your time in Albania.

Check them out and learn more about this ancient, fascinating, vibrant, and varied country. It deserves more praise than it currently gets!

Housed in an anti-nuclear bunker constructed by Albania’s communist government under Enver Hoxha, Bunk’Art 1 is one of the most extraordinary attractions in Tirana and one of the best museums in Albania. This is a huge underground bunker, comprising no fewer than five stories and more than 100 rooms.

Visitors can walk through the passageways and rooms where ex-dictator Hoxha and his aides were to seek shelter from possible nuclear attacks during the Cold War. Nowadays, Bunk’Art 1 is a unique place featuring video exhibitions and tons of art. A history museum and contemporary art gallery in one offers a one-of-a-kind immersion into Albania’s life in the Communist Era.

Similar to Bunk’Art 1, Bunk’Art 2 is also in a former bunker. This one is located in the heart of Tirana, a short walk from Skanderbeg Square. It used to be the Ministry of Internal Affairs’ bunker, a 24-room shelter that’s been transformed into another remarkable Albanian museum.

Dedicated to the Ministry of Internal Affairs’ history, which ran from 1912 to 1991, it showcases the work done by the “Sigurimi,” the former political police and essentially a persecution force. This is the best museum in Albania to learn about the many people that fell victim to communist terror. 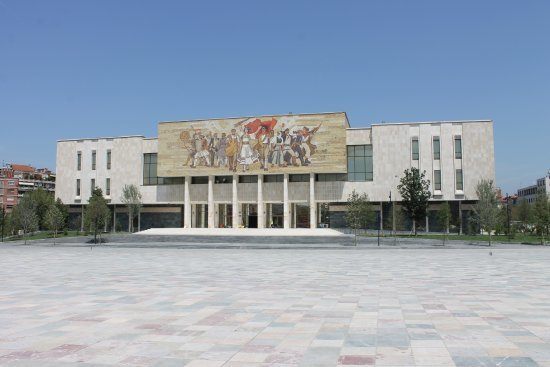 Of all museums in Albania, Tirana’s National History Museum is arguably the most important. Anyone looking to learn more about the long and turbulent history of Albania and the Albanians should visit it.

Its numerous exhibits cover the country’s entire history, from Antiquity and the Middle Ages to the Renaissance, Independence, the Anti-fascism War, and Mother Teresa (who was Albanian).

Don’t miss the Pavilion of Communist Terror with its elaborate video, image, and document displays. You’ll find this vast museum on Skanderbeg Square.

Book your Tirana accommodation with this guide.

One of Albania’s top tourist attractions, Gjirokastër Castle, is a UNESCO World Heritage Site. It dominates the townscape of Gjirokastër, a magnificent fortress built over many centuries since the 12th century. There’s plenty of history associated with this castle, about which you’ll learn during your visit there.

Nowadays, towering over the beautiful town below, it’s a striking reminder of Albania’s turbulent military past. It was a prison until as recently as 1968, but now it’s a famous historic site in Albania. The castle contains a fascinating military museum housing war memorabilia, artillery, tanks, and even a captured U.S. Air Force plane, commemorating the communist resistance against the West.

It’s a stark reminder of the clash of ideologies that happened last century—and to some, extend, continues today—and the consequences that bring with it. All in all, this is just a beautiful destination now (like many of the castles in Albania), the field atop the roof transformed into a concert venue.

Another superb Albania museum housed within a castle is the National Museum George Castrioti Skanderbeg. Housed in Krujë Castle, it’s sometimes also referred to simply as the National Skanderbeg Museum.

This is one of the most important and most visited museums in Albania, serving as a memorial and history museum. Krujë Castle, an imposing citadel, was the epicenter of Skanderbeg’s rebellion against the Ottoman Empire. The Ottomans besieged it three times but never managed to capture it. This gave Skanderbeg his status as a national hero of Albania.

The museum contains objects from the time of Skanderbeg, organized in such a way that they chronicle his military accomplishments and life in general. Inside, you’ll find everything from art to armor and a variety of other artifacts.

Just underneath the Skanderbeg Museum is the Ethnographic Museum of Krujë. Together, these two Albania museums make this a very worthy day trip from Tirana or Durrës. This particular one has one of Albania’s best ethnographic collections.

Housed in a traditional 19th-century Ottoman house, it showcases how the family that lived here was self-sufficient. They produced pretty much everything they needed themselves, including food and drinks and weaponry and leather. Walking through the house, you’ll see various rooms, musical instruments, clothing, and other artifacts.

The only museum in Albania that’s entirely dedicated to photography, the Marubi National Museum of Photography houses an impressive 500,000+ photographs. They date all the way back to the 1850s when the very first photographs were made in Albania.

The museum itself was also founded around that time by Italian painter, sculptor, and photographer Pietro Marubbi (Marubi). In fact, the museum contains photos from three generations of the Marubi family. In its essence, this is a museum about an entire family’s work.

The collections cover various topics and subjects, including tribal leaders, life in Shkodër, public happenings, and rebellions in the surrounding hills. It’s a unique insight into a few decades of Albania’s history, captured in great detail and with fantastic dedication.

This is not a museum like the museums you might be used to. This is, first and foremost, a workshop, a factory even. Anyway, if you’re in Shkodër, you should definitely stop by. It’s a marvelous place filled to the brim with all kinds of Venetian masks.

Every single mask—and there are hundreds of them—is different and treated as a separate work of art. Many of them are incredibly original. Again, this is a shop, but you can simply walk in, take a look around and start a conversation with the owner.

Lovers of art and history will want to visit the National Museum of Medieval Art in Korçë, a small city in Albania’s southeastern corner, south of Pogradec. Established in 1980, the museum features more than 7,000 cultural and artistic objects, from jewelry and textiles to metal artifacts and woodwork to religious icons and paintings.

Together, they represent different moments in the development of iconography in Albania, a significant period in its history.

Another Albanian museum dedicated to iconography is Berat’s National Iconographic Museum Onufri. It focuses on iconography in Albania in general, but also on Byzantine art.

You’ll find this incredible museum in the Church of the Dormition of Mary in Berat’s Castle Quarter. Named after 16th-century Albanian master painter Onufri, this is not a particularly large museum, but it does showcase several masterpieces of Albanian religious art. There are 173 artifacts and artworks, carefully selected from different monasteries and churches in Albania.

Other Great Museums In Albania