The 10 Best Castles In Albania

Home > The 10 Best Castles In Albania

The 10 Best Castles In Albania

Inhabited since prehistoric times, Albania may be one of Europe’s least-visited countries, but it’s also home to a myriad of fascinating historical sites. You’ll find plenty of ruins and centuries-old traditions, as well as numerous castles in Albania that can take you back to the times of old.

Albania is home to many great attractions, from stunning national parks and world-class beaches to urban destinations like Tirana and Saranda. And the Albania castles can add a little extra to your all-around Albania experience.

10 Most Beautiful Castles in Albania

The historical range of the castles in Albania is much wider than many—if not most—other Balkan countries, spanning from Antiquity to the Middle Ages. This is a country with an extremely rich past, to say the least. You’re absolutely encouraged to include one or more Albanian castles in your itinerary when you visit this beautiful southern European country. 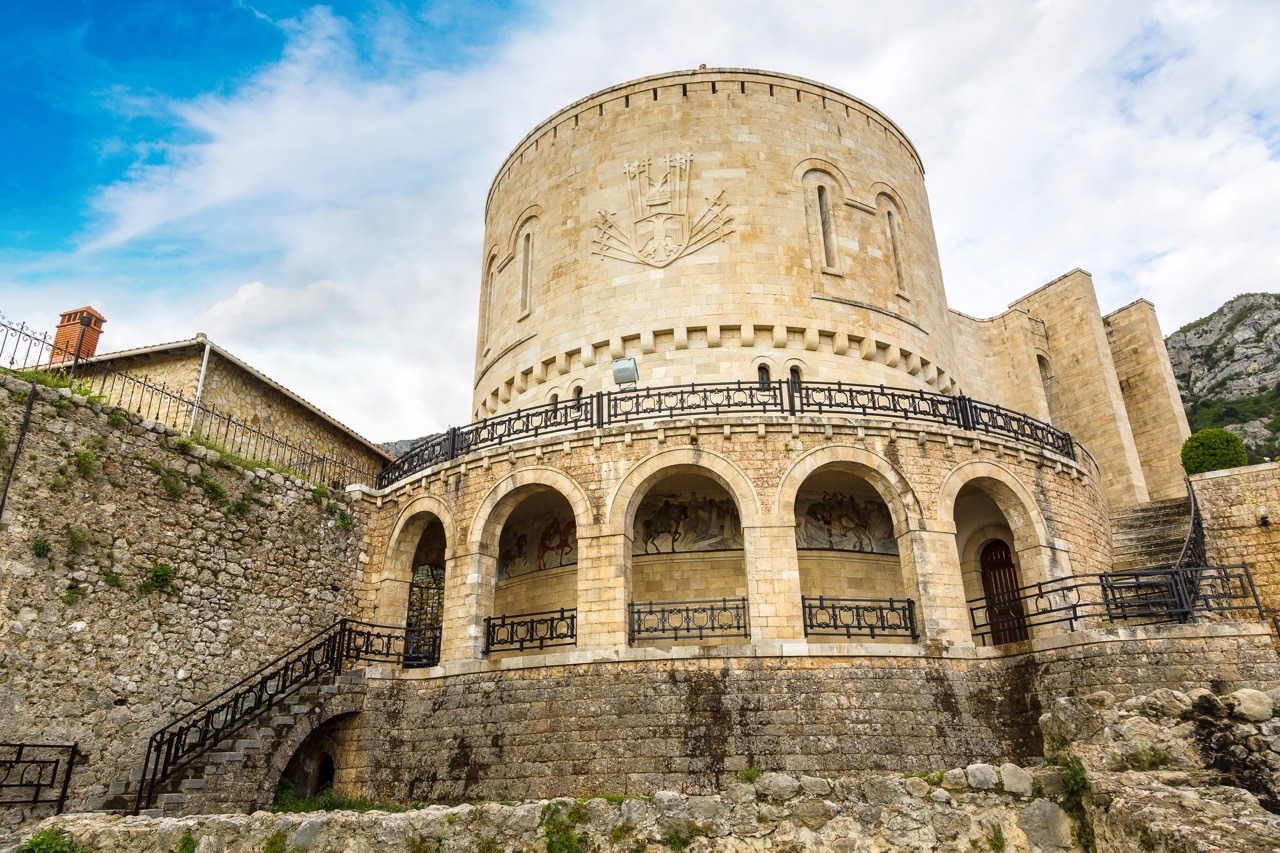 If you’re looking for the best historic sites in Albania, there’s one place that will (or should) always pop up—Krujë Castle. This architectural beauty lies in the town of Krujë. It was the heart of the rebellion of Skanderbeg, nicknamed “the Dragon of Albania” against the Ottoman Empire.

Constructed in the 5th or 6th century, this elliptical castle houses several attractions, such as the ruins of the Fatih Sultan Mehmed Mosque, a Turkish bath, an ethnographic museum, the Teqe of Dollme of the Beshtaki, and the impressive National Skanderbeg Museum.

This is one of the most important castles in Albania, a strongly recommended day trip from Tirana or Durrës.

One of the top attractions in Saranda, Lëkurësi Castle, a ruined fortress dating from the 16th century. It was built by Sultan Suleiman the Magnificent who, after besieging Corfu, had to control the port of Saranda, the Ksamil Islands, and the road to Butrint.

The strategic location of this castle atop a coastal hill provides superb panoramic views across the sea and coast. Situated only a few kilometers from the Saranda city center, it makes for a beautiful afternoon walk (or taxi ride). There are a few tourist facilities on the hilltop, including a restaurant.

The origins of Berat Castle go back more than 2,000 years. The earliest records mentioning it date from 200 B.C. and talk about its destruction by the Romans. Several centuries later, the walls were reinforced to protect them against barbarian attacks. The Castle of Berat underwent several more renovations over the following centuries, and the current structure dates mainly from the 1200s.

This magnificent stronghold is one of the most striking castles in Albania, boasting more than 20 watchtowers and massive stone walls. It’s the star attraction in the town of Berat, offering great views of the surrounding landscape and an insight into the history of Albania. However, one of the most remarkable things about this Albania castle is that people still live inside its walls.

Inside the Berat Castle, you’ll find many shops and restaurants, houses and churches, bars and bazaars. Together with Gjirokastër (see below) makes up the UNESCO World Heritage Site “Historic Centres of Berat and Gjirokastra.” 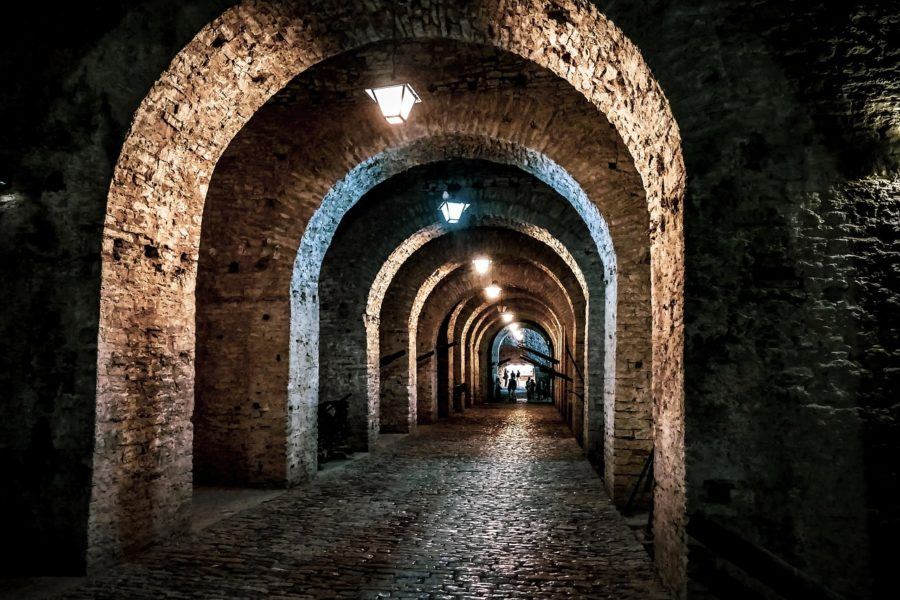 A UNESCO World Heritage Site, Gjirokastër Castle, and the town itself are among Albania’s most outstanding tourist attractions. The castle’s origins go back to the 1100s, but it’s been renovated and expanded multiple times in the following centuries. Perched at the summit of a strategic hill overlooks a vital route through the valley and dominates the townscape.

Much of the castle has been beautifully preserved, including five towers, the Gjirokastër Museum, a clock tower, and the National Folk Festival’s stage. You’ll also find a fascinating military museum here dedicated to Communist resistance against the Germans in World War II. It also houses a captured U.S. Air Force plane and several World War II tanks, which commemorate the resistance against “imperialist” Western powers.

Gjirokastër Castle is without question one of the top castles in Albania and a highly recommended day trip destination from Saranda.

One of the oldest Albanian castles, Durrës Castle, dates way back to the reign of Byzantine Emperor Anastasius I in the late-5th and early-6th centuries A.D. At that time, the city of Durrës was one of the most fortified cities in the Adriatic. The Venetians later reinforced the castle even more by adding several guard towers.

Nowadays, much of this formerly mighty stronghold is gone. Some parts, however, have been wonderfully preserved, including a massive tower and sections of the fortified walls. It’s among the top things to see in Durrës.

Named after Ali Pasha of Tepelenë, who called the castle home until 1820, the Castle of Ali Pasha Tepelena lies near Saranda and Butrint National Park, a UNESCO World Heritage Site and one of the top Albania national parks.

Located on an island, the only way to actually get there is by getting a local fisherman to take you there by boat. You can, however, get a great view of the castle from a viewpoint just off the road from Saranda to Butrint. About a minute before arriving at the national park, a short spur road leads to the viewing platform. It’s easy to miss, but you’re encouraged to look for it. It’s a magnificent-looking fortress.

A few kilometers south of Himarë in the gorgeous Albanian Riviera lies Porto Palermo Castle. Sometimes also called the Castle of Ali Pasha, its origins are unclear. The Venetians may have built it because it features a triangular design with round towers, predating the star design.

Either way, a visit to this castle comes highly recommended on any Albanian Riviera road trip. It’s definitely underrated yet makes for a great insight into the history of this region. From the road, it’s just a short walk to the castle entrance.

You’re free to wander through its hallways and corridors and explore the battlements. The view of the sea and coastline is spectacular. 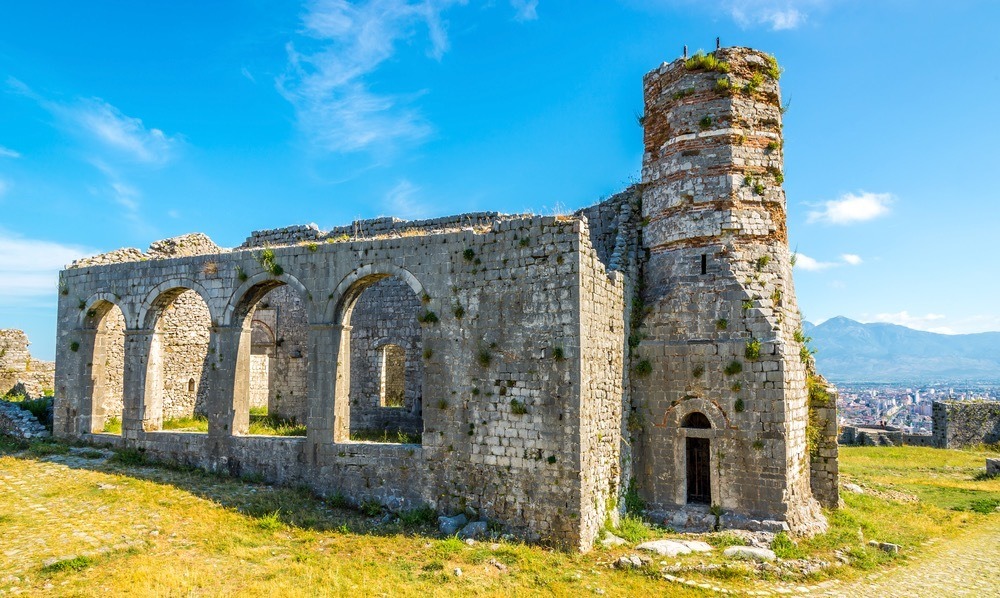 You’ll find striking Rozafa Castle just outside of the city of Shkodër in northwestern Albania. It sits atop a rocky hill at the confluence of three rivers—the Drini, Kiri, and Buna Rivers—just before the latter flows into Lake Skadar. This is an obviously strategically advantageous position, which has been contested regularly over the centuries. Shkodër’s history goes back more than 2,000 years. The city’s been under the control of the Illyrians, Romans, Serbians, Venetians, and Ottomans.

The castle was an Illyrian fortress until the Romans besieged and captured it in 167 B.C. Nowadays, it’s one of the most popular sightseeing destinations around Shkodër, its battlements and walls offering sensational views. As far as historic sites in Albania go, it doesn’t really get much better than this. Rozafa Castle is one of the most incredible castles in Albania, no question.

The imposing Castle of Bashtovë lies only about 30 kilometers from Durrës, just upriver from the mouth of Shkumbin River into the Adriatic Sea. Across the river lies Divjaka-Karavasta National Park, one of the many wonderful national parks in Albania.

This quadrangular fortress controlled a large area of the Adriatic Sea to the west and the fertile fields to the east, the Shkumbin River acting as a convenient transportation route. The ancient “Via Egnatia” road also ran through the river valley, another significant trade route worth protecting. The age of the castle is not entirely clear, but, indeed, it dates back to at least the Venetian Empire.

Bashtovë Castle is currently on Albania’s UNESCO tentative list. It may be added to the list of UNESCO World Heritage Sites in the future.

The foundations of the 2,000-year-old Elbasan Castle, in the ancient town of Elbasan, date back to the 3rd century B.C. when the Romans built it to defend this vital town. Almost the entire castle was destroyed during wars in the 300s and 400s, though. Emperor Justinian once again rebuilt it to protect the major “Via Egnatia,” a major road connecting various Roman cities.

Much later, in the Ottoman era, Mehmet the Second used the fortress as a base for his military campaign against Skanderberg. The heydays of Elbasan Castle were in the 17th century, a time when the castle encompasses no fewer than 2,000 houses and almost 1,000 (work)shops. Nowadays, people still live within the castle, surrounded by massive walls. You’ll find plenty of attractions here, from mosques and churches to a clock tower and other historical monuments.

Other Albanian Castles Worth Visiting