What to See When You Visit Albania!

Home > What to See When You Visit Albania!

What to See When You Visit Albania!

Located between Montenegro, Macedonia, Kosovo, and Greece, Albania sometimes seems like a forgotten corner of Europe. And that’s really a shame. This ancient country offers plenty, from historic cities to imposing mountain ranges and unspoiled beaches.

Albania is a superb place to visit if you’re looking for a destination that’s untouched by mass tourism but still has plenty to offer in terms of nature and history. Albania is really as old as Ancient Greece and Ancient Rome, the region being inhabited since the 4th century BC. Nowadays, it’s an increasingly modern country, boasting many great attractions, yet still well off the beaten path. You’ll see when you visit Albania that it’s essentially a combination of Croatia, Greece, and Italy, without the crowds.

If you’re thinking about visiting Albania—and you’re, of course, encouraged to do so—you might wonder where to go in Albania. Consider building your itinerary around some (or all) of the following places.

Situated high in the Albanian Alps in the far north of the country, Theth National Park is a remote region. Some outdoor enthusiasts consider it one of Albania’s most beautiful places, home to attractions such as the Lock-in Tower, a working watermill, and the Grunnas Waterfall.

Within the park, its namesake village of Theth is pretty much as remote as a village can get in Europe. It’s accessible only via a 25-kilometer unpaved road, which is impassable in winter. Even in summer, you might need a 4WD vehicle to get there. As a reward, you receive solitude and tranquility amid beautiful nature. 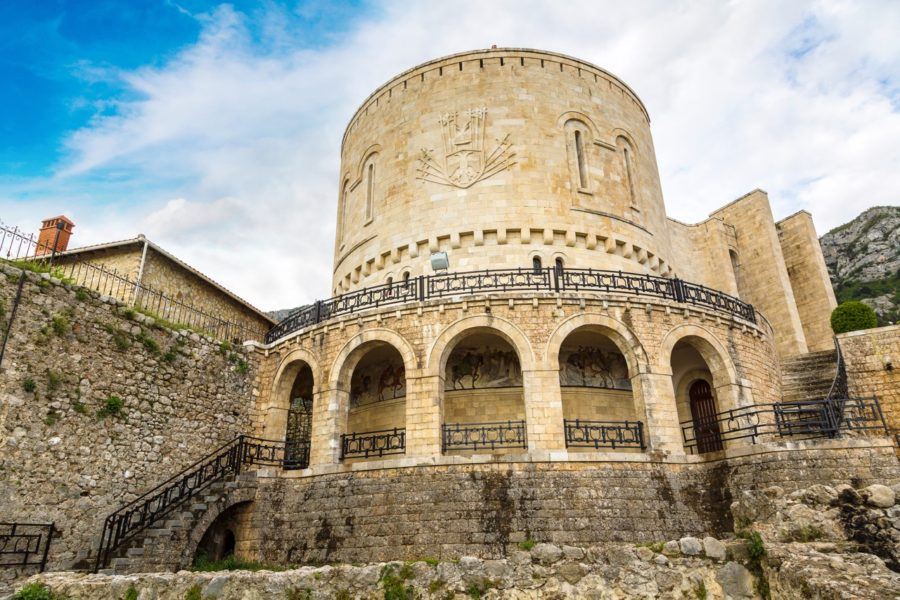 A short drive northeast of Tirana, Kruja is home to the iconic Kruja Castle, a real national icon in Albania. This castle houses the renowned Skanderberg Museum, a must-visit attraction for all first-time visitors to Albania.

Kruja Castle is notable because this was the very place where George Kastrioti Skanderberg, an Albanian national hero, defended the nation against an invasion by the Ottomans. In addition to this fascinating history, the castle provides striking views of the Adriatic Sea.

Llogara National Park lies in the country’s southwest and is the setting of one of the most incredible drives in southeastern Europe. The park’s central feature and attraction is the Llogara Pass, a road that reaches a height of 1,000 meters above sea level—quite impressive knowing that the park lies very close to the Adriatic coast.

You’ll find a collection of restaurants and other services at the top of the pass, offering you a perfect spot from which to enjoy the breathtaking views. 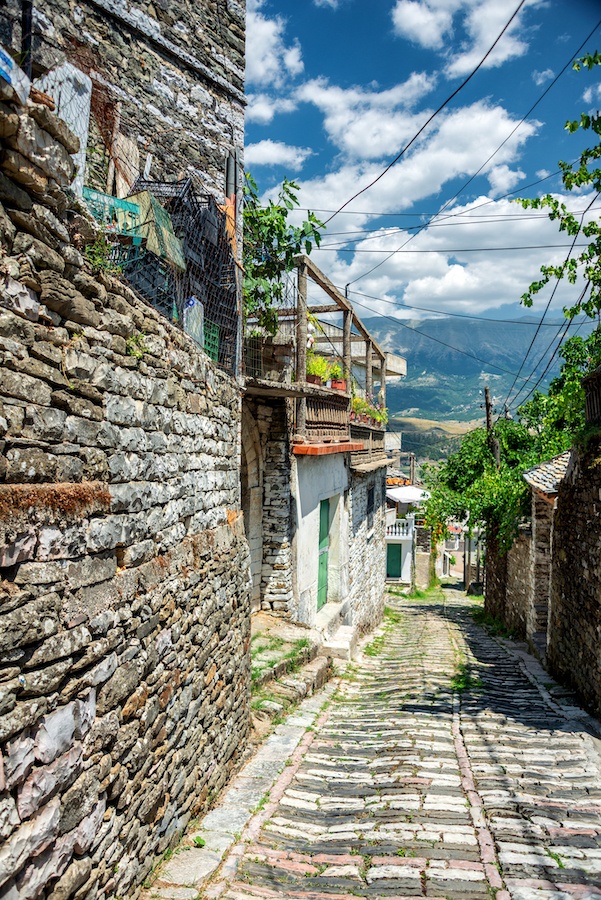 If you’re a history buff, you’ll love visiting Gjirokaster, a historical city in the south of Albania. Because of its uniform architectural style, dating from the Ottoman period, the city’s old center is a UNESCO World Heritage Site.

In addition to its striking houses, Gjirokaster has a military museum and is home to the Gjirokaster Fortress, which is the setting of the popular and fascinating Gjirokaster National Folklore Festival, held every five years.

Shkoder lies in the northwest of Albania, a town with many features near the border with Montenegro. A strategically located town, Shkoder has endured more than its fair share of battles and wars, from as far back as Roman times to recent aristocratic feuds. Unsurprisingly, Shkoder’s main attraction is the ruins of Rozafa Castle. You can visit the castle and the museum exhibiting the city’s history.

Besides the castle, Shkoder has another significant attraction—Lake Shkoder. Known as Lake Skadar in Montenegro, this lake is the largest in southeastern Europe and lies in both countries.

Another lake in Albania that belongs on any itinerary is Lake Ohrid. This lake also lies in two countries—Albania and Macedonia—and is of similar tourist, natural and historical importance.

Lake Ohrid is among Europe’s oldest and deepest lakes, providing a habitat for various animal and plant species, many of which are endemic to the region. Its aquatic ecosystem is vital, so UNESCO protects the lake as a World Heritage Site and a Biosphere Reserve. 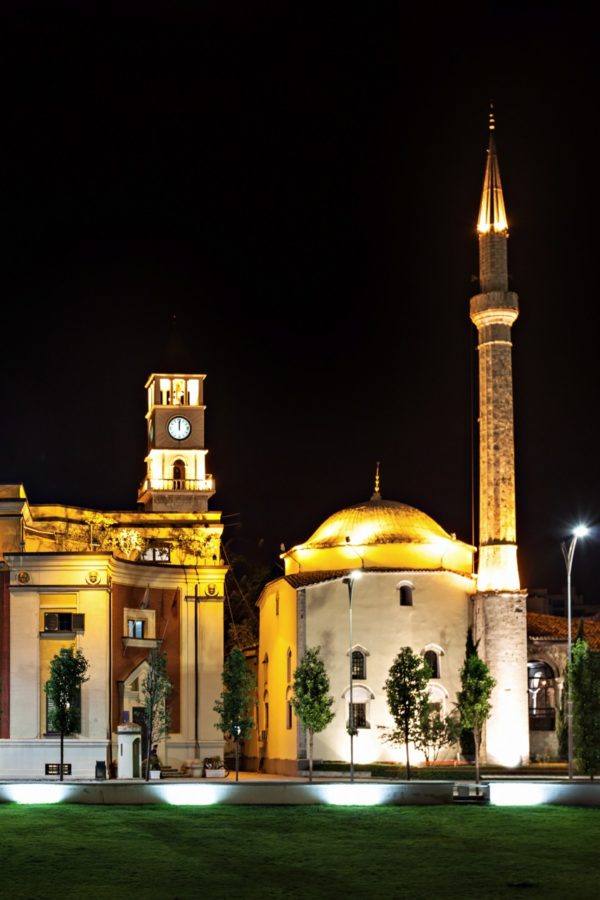 Albania’s capital, Tirana, is most visitors’ starting point. It’s recommended that you take your time exploring this relatively unknown city. The country’s economic and political center, the city is also home to many cultural and historical institutions. It’s the perfect place to get to know the country.

Landmark attractions that you should definitely visit are the Et’hem Bey Mosque, the Skanderberg Square, and the National Historical Museum. 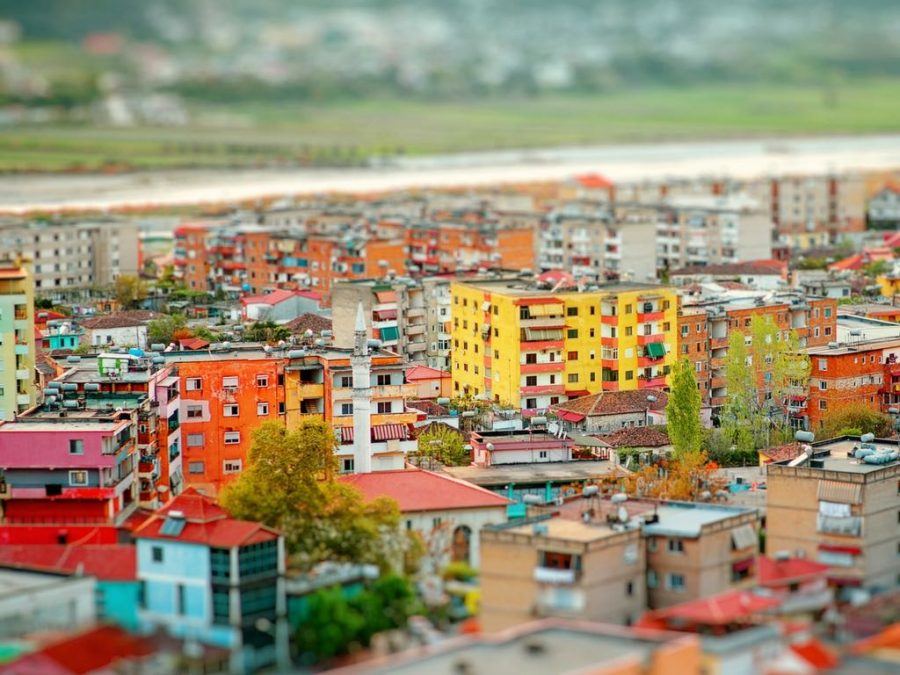 Without question, one of the best places to visit in Albania, Berat, located in the heart of the country, is one of its oldest towns. Nicknamed “the City of a Thousand Windows,” Berat should be a focal point on your itinerary.

A significant highlight is the Kalaja Castle, which encompasses several mosques and churches, and is still inhabited by many people. Don’t miss the Mangalem Quarter and the Church of St. Mary of Blachernae. Berat is of such historical and cultural significance that it’s now UNESCO World Heritage Site.

Arguably the most popular tourist destination in Albania, the Albanian Riviera in the country’s southwest is known for its music festivals, great restaurants, busy nightlife, and beautiful beaches.

The tourist scene is still in its infancy here, which means much smaller crowds than in other similar-looking destinations in the Adriatic. You can easily escape it if this is too busy for you. You can enjoy stunning beaches and perfect weather in relative peace and quiet. Moreover, just behind the beaches, you will find authentic countryside and rugged mountains.

How To Get To Albania

Stretched out along the Western Balkan coast, from Montenegro in the north to Greece to its south, Albania lies just across the Adriatic Sea from the “heel of Italy’s boot.” Although the country itself might not be among the most-visited in Southern Europe, those of you who would, in fact, like to go there won’t have any trouble getting in.

Flying somewhere remains the most popular transportation method to and from holiday destinations, and getting to Albania by plane is becoming easier and easier as well.

Many of Europe’s low-cost airlines have connections to Tirana from all over the continent, while several major airlines also provide flights to and from Albania. British Airways, Turkish Airlines, Lufthansa, Alitalia, and Aegean Air are examples. The country’s one major airport lies outside Tirana and is named after Albania’s most famous citizen—Mother Teresa.

Another way to get to Albania is by bus. Unquestionably, the most straightforward bus connections are between Tirana, Thessaloniki, and Athens in Greece. There’s also a direct service from Skopje, Macedonia, to the capital city. Additionally, within Albania, there are bus connections between several other cities, too. Getting from Montenegro to Albania by bus is much more of a challenge. You may be able to catch a bus from Budva to Tirana, but those don’t run more than merely a couple of times a week.

Your third option might be the most interesting—ferries. Located on the Adriatic Sea coast, Albania is well-connected to its neighboring countries via several ferry routes. From Italy, almost all ferries arrive in Durrës, leaving from popular coastal cities such as Bari, Ancona, and Brindisi. There’s also a ferry link between Brindisi and Vlora. From Corfu in Greece, an Ionian Seaways ferry travels to Saranda at least once a day—more in the high season.

How Much To Budget For An Albania Trip 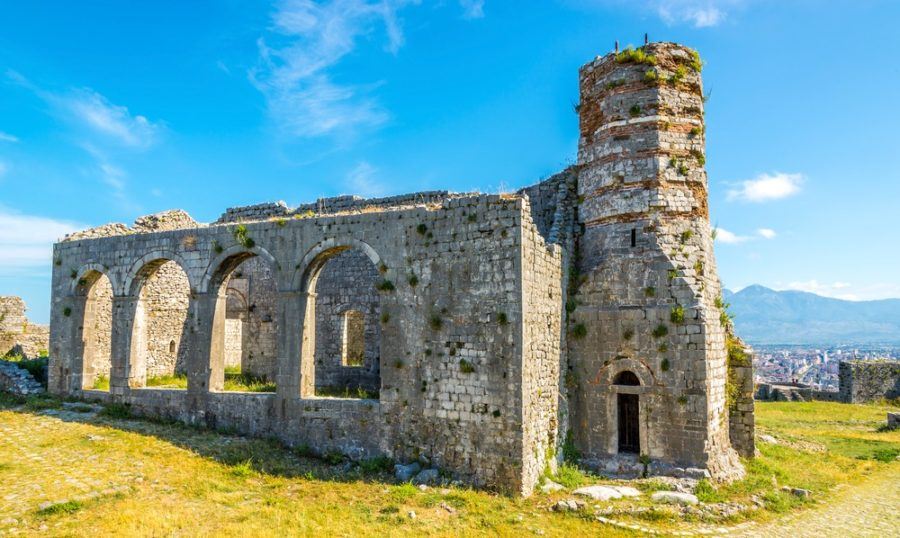 First, it’s essential to know Albania is not in the Eurozone. They still have their own currency, known as the Albanian Lek, the exchange rate of which stands around 133 Lek for 1 euro as of February 2018. However, euros and American dollars are widely accepted and can be exchanged throughout the country.

By all accounts, Albania remains a cheap country to travel to and around. Especially by European standards, this is a budget destination as you’ll find anywhere on the continent.

If you’re traveling on a very tight budget, you should be able to get by with less than 50 euro per person per day, including cheap accommodation and all meals. You can find a dorm bed in a hostel for 15-20 euro, while a double room in a budget hotel costs up to 40 euro. Midrange hotel rooms are between 40 and 60 euro. A high-end hotel in the city charges up to 80 euro for a nice room, which is still very affordable compared with other places in Europe.

For most people, an average daily budget in the 50-100 euro range will get them everything they could possibly want during a visit to Albania.

If, however, you plan to visit lots of museums and historic sites, where entry fees need to be paid, stay in a top-end hotel, and eat out at upscale restaurants several times, you will want to budget upward of 100 euro per day.

Also good to know is the fact that tips are always appreciated in restaurants and often expected in high-end places. Tips of around 10% are sufficient. Leaving some small change—rounding up the bill—is the polite thing to do in places like bars and coffeehouses.

Here are many more things to do in Albania.