5 Most Beautiful Lakes In Albania

Home > 5 Most Beautiful Lakes In Albania

5 Most Beautiful Lakes In Albania

Although Albania’s most well-known tourist destinations are its lively capital of Tirana and the stunning Adriatic and Ionian Coast, the many beautiful lakes in Albania also have fantastic vacation potential.

There are more than 240 natural and an incredible 800 artificial lakes in Albania, numbers that are staggeringly high considering the country’s relatively small size. So, naturally, you’ve got plenty of opportunities to indulge in water sports, sunbathing, beach-going, wildlife watching, and fishing when visiting Albania.

Combined with its gorgeous coastline, the Albania lakes make the country such an exceptional summer holiday destination.

Moreover, Albania is home to several of the most essential lakes on the entire Balkan Peninsula, bodies of water that are both economically (tourism) and ecologically important. Some of them are protected as a national park, UNESCO Biosphere Reserve, and/or UNESCO World Heritage Site. 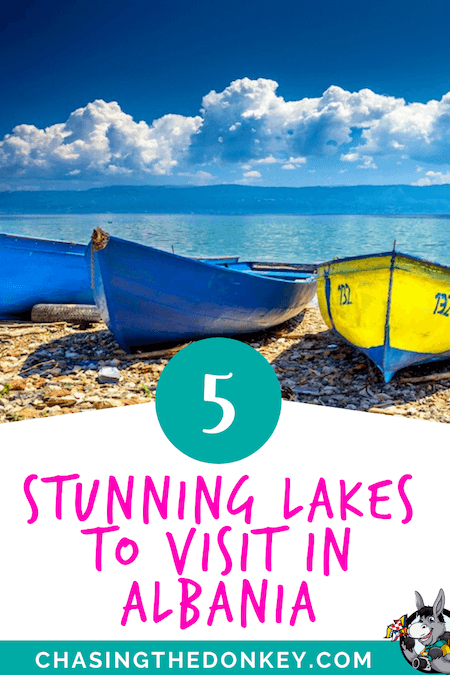 The 5 Most Beautiful Lakes In Albania

Although there are more than a thousand lakes in Albania, the vast majority of them are artificial and lack historical or natural importance. That’s not to say they’re not pretty, though! Some are downright gorgeous.

However, the Albania lakes featured below all have something unique going on, whether it’s incredible biodiversity, historical significance, or accessible beauty from Tirana.

Making up some of the borders between Albania and North Macedonia, Lake Ohrid is arguably the greatest and most famous lake in the Balkans. This is one of the absolute natural highlights of Albania, a massive body of water of huge cultural and natural significance.

With its maximum depth of 288 meters (mean depth of 155 meters), it’s the deepest lake in the Balkans and one of the deepest in Europe. Additionally, it’s also one of the oldest lakes in Europe, even globally, its origins going back five million years. (Other similarly ancient lakes elsewhere on Earth include Lake Baikal and Lake Tanganyika.)

Lake Ohrid is home to no fewer than 200 endemic species, including everything from plankton to predatory fish and a fantastic variety of crustaceans and mollusks. In fact, considering its surface area, Lake Ohrid could be regarded as the world’s most biodiverse lake.

This ancient history combined with remarkable diversity in both plant and animal life is why Lake Ohrid is a UNESCO World Heritage Site in Albania.

As far as lakeshore towns go, there are a few where you can base yourself to explore this gorgeous Albanian lake. The main town is Pogradec, which is home to several interesting cultural and historical monuments. Other notable resort villages along the Albanian shore of Lake Ohrid are Lin, Tushemisht, Drilon, and Pojska.

While the majority of the most beautiful lakes in Albania are natural lakes, there are also a few artificial ones that are exceptionally pretty.

Arguably the best example is Lake Bovilla, a small reservoir within Dajti National Park that provides most of Tirana’s drinking water. The lake lies only about 19 kilometers to the northeast of the Albanian capital, making for a great day trip destination from Tirana.

Although there’s not a lot of biodiversity going on in the lake—there are only a few types of fish—and swimming isn’t allowed, Lake Bovilla is undeniably photogenic.

Some of the most popular things to do around Lake Bovilla are hiking, picnicking, camping, and rock climbing.

Part of the Ohrid-Prespa Transboundary Reserve, a UNESCO Biosphere Reserve that includes Lake Ohrid, Lake Prespa is one of the most beautiful lakes in Albania.

The lake lies at the borders of three different countries—Albania, North Macedonia, and Greece—and is effectively split up between those Balkan countries. The entire Albanian part of Lake Prespa is protected as Prespa National Park, which is home to a wide variety of wildlife and plants, including no fewer than 1,100 vascular plant species.

Next to Lake Prespa lies its little twin, known as Small Prespa Lake, which is in Albania and Greece. This shallow lake is famous for being one of the highest lakes in the Balkans, but mainly for hosting the largest colony of Dalmatian pelicans in the world.

These twin lakes are some of Albania’s most beautiful natural destinations, great for outdoor activities like fishing, wildlife watching, hiking, and cycling.

Unlike popular Lake Ohrid, both Lake Prespa and Small Prespa Lake are very quiet. You won’t find any huge crowds of tourists here. Instead, it’s the perfect place for a peaceful getaway in nature.

Another one of the border lakes in Albania is Lake Shkodër. Named after the town of Shkodër, which sits nestled on its southeastern shore, this lake lies in the country’s far northwest, on the border with Montenegro. This is the largest lake in all of Southern Europe.

Lake Shkodër is known by many names, including, alternatively as Lake Shkodra in Albanian, Lake Scutari in Italian, and Lake Skadar in Montenegrin. The part of the lake in Montenegro is protected as a national park, while the Albanian part is a RAMSAR site and nature reserve.

It’s particularly famous for its diversity in freshwater species and is home to many different fish, such as eel, bleak, and carp. The lake also provides a habitat for about 270 bird species, including pelicans, herons, and cormorants, making it one of Europe’s most important bird reserves. Naturally, bird watching is a super-popular activity here.

Interestingly, even though they lie pretty far apart, there’s a link between Lake Ohrid and Lake Shkodër—the Drin River flows from Ohrid to Shkodër.

Like most other Albanian lakes, Lake Shkodër also offers various outdoor activities, from boating and fishing to hiking, camping, and cycling.

The town of Shkodër is home to many historic sites and buildings, most notably the Lead Mosque, Mes Bridge, Shkodër Cathedral, and Rozafa Castle. 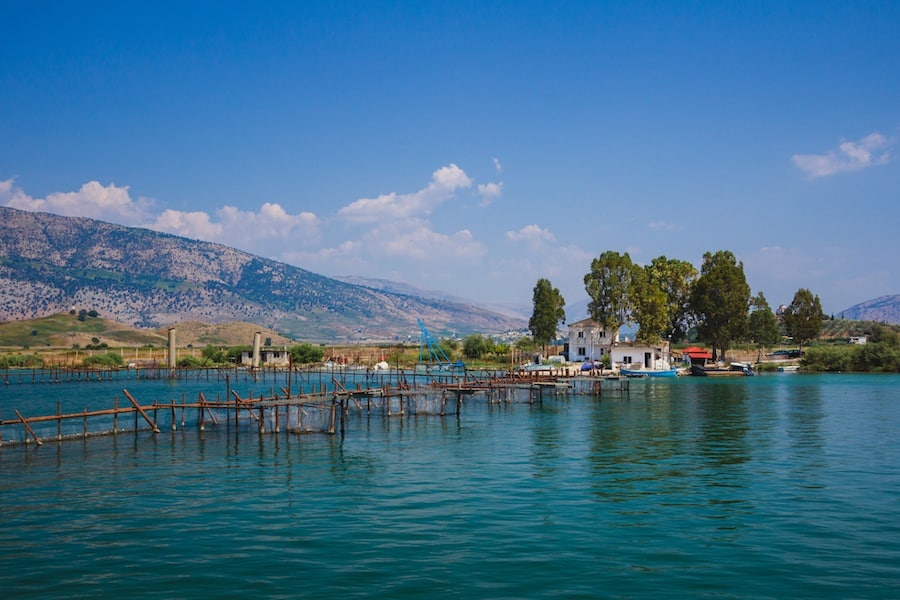 Located in the far southwestern corner of Albania, near the popular resort town of Sarandë, Lake Burtrint is a gorgeous salt lagoon a stone’s throw from the Ionian Sea.

Surrounded by densely forests hills and lined with rock-strewn shores, Lake Butrint consists of freshwater wetlands and saltwater marshes. The lagoon is connected to the Ionian Sea by the Vivari Channel. Because of this combination of saltwater and freshwater features, Lake Butrint is an internationally important wetland area designated as a RAMSAR site.

Additionally and importantly, the lake is part of the iconic Butrint National Park, one of Albania’s most incredible national parks. Besides its undeniable natural importance, the park also protects various unique archaeological sites.

The ruins of Butrint include a Roman theater, forum, aqueduct, Dionysus altar, temples, and thermae. Because of this wealth of historically valuable ruins, Butrint National Park was declared a UNESCO World Heritage Site in 1992.

Together, Lake Butrint and Butrint National Park are phenomenal day trip destinations from nearby Sarandë.

Now, which of these lakes in Albania will you head to first?