Things To Do In Skopje, Macedonia: One Of Europe’s Most Unusual Capitals

Home > Things To Do In Skopje, Macedonia: One Of Europe’s Most Unusual Capitals

Things To Do In Skopje, Macedonia: One Of Europe’s Most Unusual Capitals

Proudly standing on the banks of the Vardar River, Skopje is Macedonia’s capital and the country’s economic, political, and cultural center.

Skopje is a city with a rich history that saw numerous different conquerors in the past, starting from Illyrian tribes, through Romans, Byzantines, Slavs, and Ottomans. The Skopje of today is a real city of contrast and a city where the lines between the east and the west are fading away. And I’m not just saying that. Check out this article with some of the best things to do and see in Skopje and observe for yourself.

Monuments And Skopje’s Very Own “Disneyland” (For Free!) 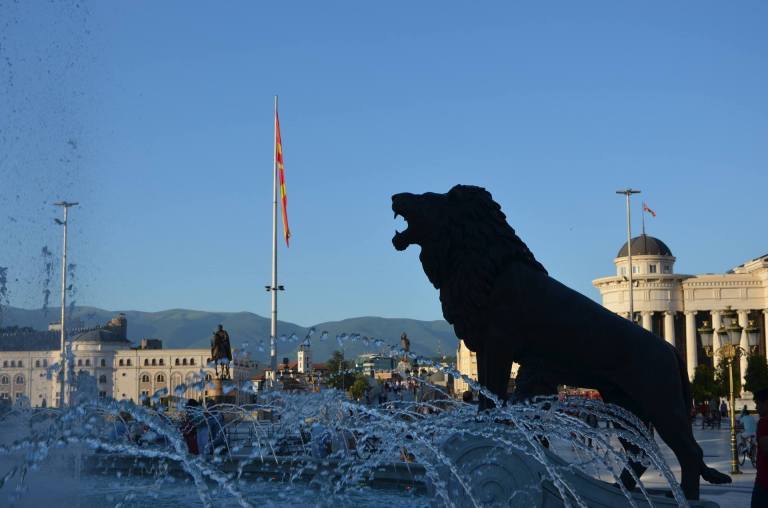 Even though not my favorite, this is the first thing most tourists notice when visiting Skopje. There are over 100 monuments and statues in the city center located within a radius of 2 square kilometers. Some of them look pretty good but a lot of them aren’t even related to Macedonian history, and because of them Skopje has been dubbed as Europe’s kitschiest capital. Around the city square, you’ll see a few gigantic statues, Skopje’s own “Arc de Triomphe” and even floating hotels on the river Vardar.

Despite everything, tourists seem to love this part of the city. However, locals would beg to differ, as all of these monuments were a part of the project Skopje 2014, whose completion required spending millions of taxpayers’ money- something the residents of one of the poorest countries in Europe were not too happy about.

With that being said, let’s take a look at some other places in Skopje that are worth visiting. Let’s start with… 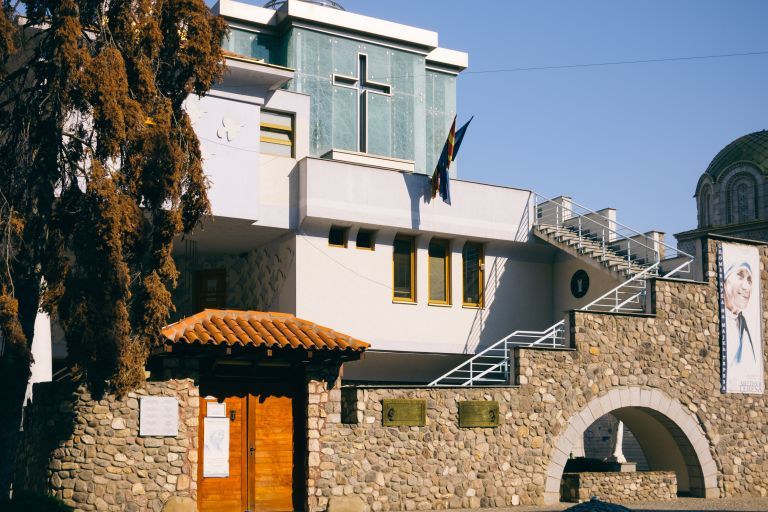 Many people forget that Mother Teresa was born in Skopje in 1910. Two years after her death (in 2009), the Mother Teresa Memorial House was built in her honor. The museum features a lot of photos from her early days, as well as a lot of documents following Mother Teresa’s life and religious work and the museum even has its own small chapel and a multimedia center that plays films related to her humanitarian work. Visiting the memorial house is free of cost.

If you love museums like this, take a peek at other interesting museums in Skopje here.

As you’re making your way through the numerous monuments outside of the memorial house, you’ll inevitably notice…

Stone Bridge- One Of The Oldest Ones In Europe 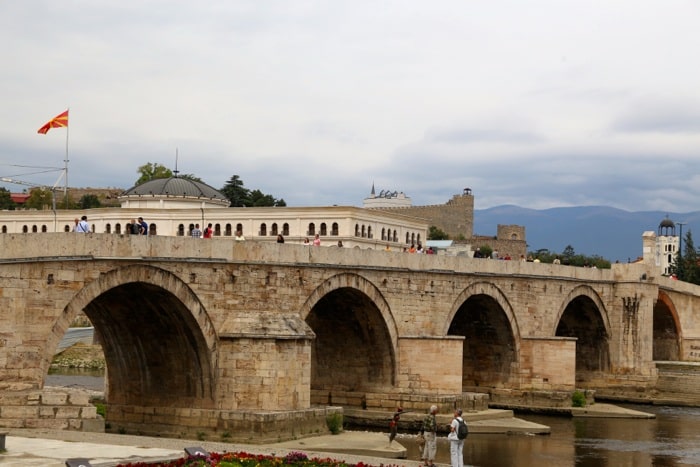 Skopje was built on the banks of the Vardar River that splits the city into two halves, and there are a lot of bridges connecting the two parts of the city. One of those is Stone Bridge- one of the oldest bridges in Europe. The Stone Bridge was built during the rule of the Byzantine Emperor Justinian I, and it was reconstructed again in the 15th century by the Ottomans.

Today, the Stone Bridge links the old part of Skopje to the new and is that one monument that represents all facets of Skopje- Macedonian, Roman, Ottoman, and European.

This bridge connects the monument-filled, modern-looking square to the Old Bazaar Street and crossing this bridge is one of the most shocking experiences in Skopje. You go from seeing things like the “Arc de Triomphe” to seeing mosques and small cobbled streets where an archaic way of life is preserved.

The Old Bazaar is Skopje’s very own living museum. This area is filled with Ottoman mosques, Byzantine buildings, türbes (mausoleum tombs), converted hammams, and a few museums. It’s the second largest Old Bazaar, only falling behind the one in Istanbul. The Old Bazaar stretches from the Stone Bridge to the Bazaar and the Kale Fortress. Some of the best places to visit around the Old Bazaar are Kursumli An (Memorial of Mula Musledin Hodza), the Cifte Amam, and the Mustafa Pasha Mosque.

Passing by this part of the city is something you absolutely have to do while you’re in town. Here you will also find a lot of craftsman shops where you can find anything from small decorations to traditional costumes. You’ll also be able to find a lot of old restaurants and try some amazing traditional food.

After you’re done exploring the area, there’s no better place to relax than… 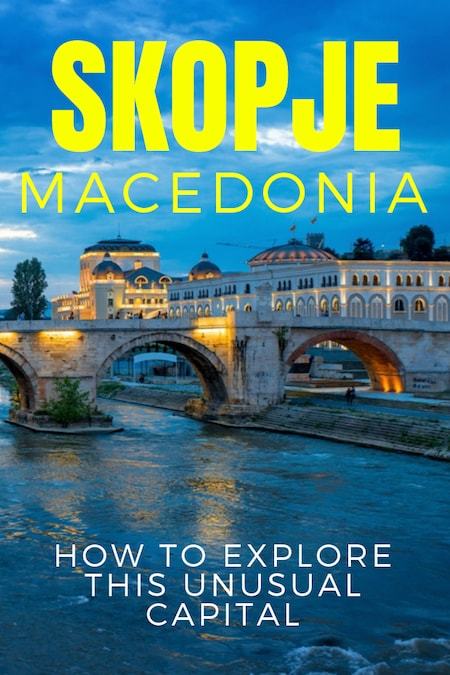 Only a block away from the city center, you’ll find the Bohemian and alternative part of the city. In the past, this street was the-place-to-be for the old bohemians of Skopje. Fortunately, this street got its reputation back after the local authorities decided to redesign it and give its old charm back. As you’re walking down this street, you’ll notice a lot of greenery and restaurants where a relaxing, pleasant vibe is floating around.

Many tourists are surprised by this unexpected café/restaurant culture. There are a lot of great cafes and restaurants, filled with people and a positive atmosphere throughout the entire day- something you don’t see in a lot of other cities. The best part? You can spend the whole day visiting cafes and restaurants and spend close to nothing because Skopje is one of the most affordable capitals in Europe.

The Bohemian street is located right next to…

Stretching over a surface of 486,000 m, the City Park is famous for being the lungs of Skopje and a paradise for photographers. You can come here at any time of the year, take amazing photographs, and enjoy the beautiful nature. The park is perfect for picnics too, and right next to it, you’ll find the Skopje Zoo- the largest one in Macedonia.

Not too far away from City Park, you’ll find the second most amazing view of Skopje at… 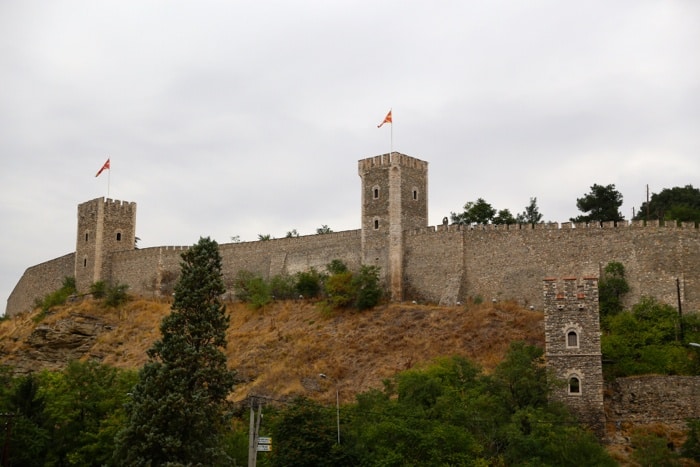 The Kale Fortress had stood watch over Macedonia’s capital since the 6th century when it was built by the emperor Justinian I. During the Ottoman occupation, the fortress was destroyed, and today, only 120 meters of the wall remains intact. Kale is located at the highest point in the city, and you can get some amazing views of the Vardar Bank and Skopje’s center. However, I mentioned this is the second-best view of the city. If you’re looking for the best panoramic view of Skopje, you must try…

Taking the Cable Car to the top of Vodno Hill 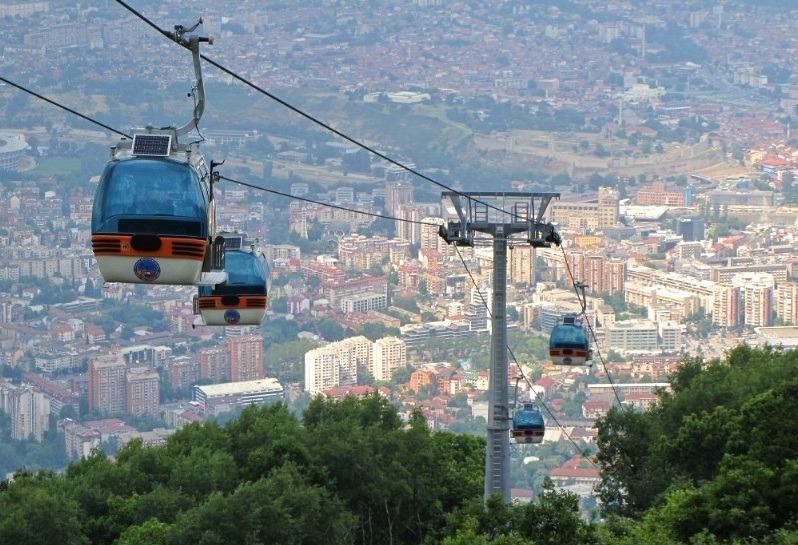 Vodno Hill is located right out of the city center, and you have two options of getting to the 700 meters high top. The first option is by trekking and the second is taking the Millennium Bus and then taking the Millennium Cross Cable Car. The first option will take you around 4-5 hours (depending on your pace) and the second option will take 30-40 minutes, and it will cost you 135 denars (around 2 euros).

At the top of the hill, you’ll get the most exciting panoramic view of Skopje and the 66 meters tall cross, which makes it one of the biggest ones in the world. The cross was built in 2002 to commemorate 2,000 years of Christianity in Macedonia, and it is so big that it can be seen from almost anywhere in Skopje. However, these are not the only interesting things you’ll find on Vodno Hill. On the other side of the hill, you’ll find the…

Right next to the complex, in the middle of nowhere is where you can find an amazing specimen of Byzantine architecture in… 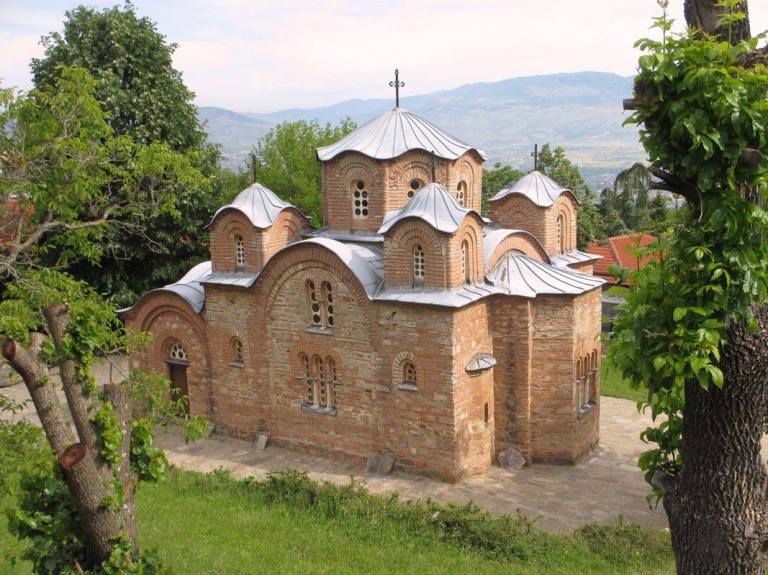 This 12th-century Byzantine church was built in 1164 and it’s a magnificent example of Byzantine architecture. The monastery has been dedicated to Saint Pateleimon, the patron saint of physicians and is one of the oldest ones in Macedonia that’s in such a good condition. However, this isn’t the only thing St. Panteleimon is famous for.

Inside the monastery, you’ll find some impressive Byzantine frescoes that depict the life and death of Jesus Christ, including the Transfiguration and the Descent from the Cross. I know this might not sound as fascinating at first glance but keep in mind that these relics date back to the 1100s.

You really couldn’t find many frescoes in a church, nd facial expressions were fairly uncommon for the traditional Byzantine art of the 11th century. In fact, they didn’t appear before the renaissance became a thing in Europe in the 14th century…

Just like the Ethno Village complex, you can also reach the monastery with the bus number 28. Furthermore, if you want to explore some more of Skopje’s amazing nature, you absolutely must visit…

The Matka Canyon is a must for all nature lovers with its hidden hiking paths, climbing routes, and caves. One of those caves is Vrelo Cave, arguably the deepest underwater cave in the world that is still yet to be fully explored. When you’re around, you should definitely rent a boat, roam around the canyon and check out Vrelo Cave. The price for renting a boat is 200 denars per hour (3.5 euros).

While you’re around, you should also check out some more middle-aged monasteries which are scattered across the canyon. The canyon is also an incredible, biologically-diverse system and 20% of the plant life can only be found here in Matka. The canyon is also home to 77 different species of butterflies.

You can reach Matka with the bus number 60 or by a taxi. It normally takes around 45-60 minutes to reach from the city center.

Alternatively, if you’re in a very good shape, you can reach the canyon by climbing down from Vodno, passing the Ethno Village and the Panteleymon monastery and walking all the way to the backside of the canyon. You might have to spend a whole day walking but you’ll see the finest of Skopje’s nature (this route is something not even a lot of locals know about).

Speaking of nature, you also must check out… 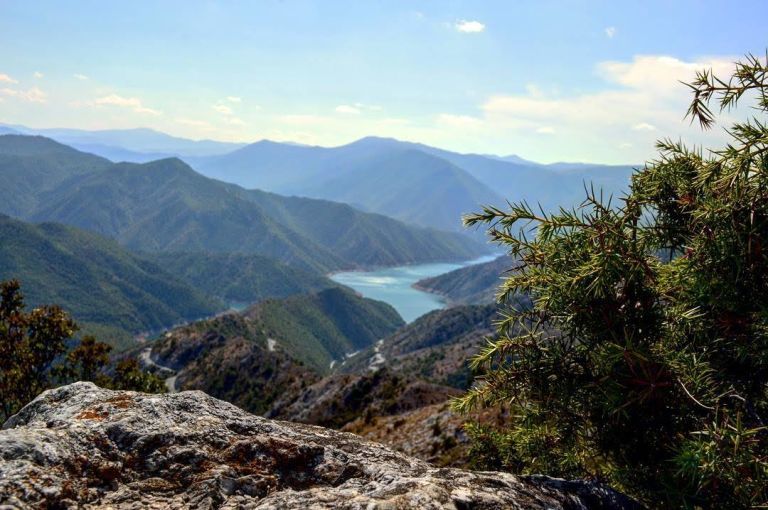 Kozjak is an absolute favorite among locals. In the forests surrounding Skopje’s outskirts, the Kozjak Dam forms a crystal-clear lake that feels like it’s trapped between the mountains. Not too far from the lake, you can find bores, wild goats, and even wolves. Unfortunately, you can’t get here by public transport and you’ll either have to rent a car or arrange a taxi but it’ll be worth it.

As you can see, Skopje is a really interesting and unusual city and there are even more places to see than the one mentioned in this article. If you would like to visit some more places, you should definitely try…

Joining this free walking tour is a great way to cover some of Skopje’s highlights and learn more about the city. The tour lasts for 3 hours, covers some serious ground and also allows you to try some homemade rakija (a traditional Macedonian spirit). For more information about this tour, check out the official website of Skopje Walks.

Finally, I would like to add one last thing on this top things to do in Skopje list, this time a  little something for architecture lovers:

Skopje is one of the last places in Europe where you can witness this architectural style typical for the communism era. However, the brutalist architecture of Skopje is a little different. The city survived a major earthquake in 1963 that destroyed most of the city’s center. Two years after the earthquake, the Japanese architect Kenzo Tange was chosen to design the new look of the city. It was then when he decided to create the concrete city of the future.

Have you ever visited Skopje? If yes, what were your impressions of the city and did we miss a key thing to do or see in Skpoje? Let us know in the comments!