Home > Best Macedonia Beaches & Cafes You Have To Hit This Summer

Being a proud half-Macedonian and having been to Ohrid countless times, I am familiar with the Pearl of the Balkans; I could walk around blindfolded and not miss a step.

Ohrid is the world’s best-kept secret, littered with pristine beaches, breathtaking views, fresh food, fantastic nightlife, and, most importantly, a wealth of history. Ohrid is the oldest city globally with continuous civilization advancement, earning it the name “Kingdom of Archaeologists.” Most people know this, but because it’s a super cool fact, I’m going to chuck it in any way; Ohrid has a church for each day of the year – 365 in total, earning it yet another name, “The Balkan Jerusalem.”

It is a city for young and old alike, and you will NEVER hear anyone say they haven’t thoroughly enjoyed Ohrid and can’t wait to go back. By the time you’re up-to-speed with this article, you’ll be booking your ticket as well 😉

Macedonia Beaches You Gotta  Check Out

Ohrid is a UNESCO world heritage city of approx. 50,000 inhabitants. It was built on the oldest lake’s shores in Europe – the town after which it is named Ohrid. It is an untouched corner of the world, its beauty immeasurable.

Situated on the shores of a great lake, there are, of course, many beaches along its 56-kilometer shoreline. I would recommend using a taxi to get to all of these places, bar Kaneo where you can walk if you stay in town. Taxi rates are pretty cheap here and the best way to get around unless you want to hire a car (plenty of rental agencies throughout Ohrid, and it is super easy to find one!). Here are just a few with a little something for everyone.

‘Letna Kaneo,’ one of the best places to eat in Ohrid, is also on a stunning beach! It doesn’t get much better!

A picturesque short walk from town, walking through the citadel behind Sv Sofia church and over a gorgeous bridge, you will come to Kaneo beach, situated under Sv Jovan Kaneo church, one of Ohrid’s most beautiful churches (and my favorite!). The view is pretty magnificent also. The cocktails here are on point as well, so definitely have a couple when you’ve taken a break from swimming in the freshest water on earth. This beach can get pretty crowded in peak tourist season, so maybe not be the best with small kids.

Gradishte beach is located 20 kilometers south of Ohrid. It’s a spot where you can kill two birds with one stone and get some pretty cool history in and downtime. Popular with locals and family-friendly, there are several cafes to eat at and have coffee and bathroom blocks. It is a MUST on your list of things to do here.

On a famous archaeological site a couple of km up the road, the Museum on Water, also known as the Bay of Bones, is a replica reconstruction of how archaeologists believe the area would have looked like between 1200 and 600 BC when the pile dwellers lived on top of the water there. Many original artifacts and fossils excavated from the bottom of the lake between 1997 and 2005 are on display now. There’s a plus for divers here as well as you can also visit the underwater excavations. Happy days!

Lagadin is a gorgeous town located at the foot of the Galicica national park, about 10km from the city center, with one of the most beautiful beaches in Ohrid.

All the beaches in Macedonia have options for sunbeds (approx. 100 denars per sunbed) and have bars with table service. There is also a hotel there which is a great place to stay if you don’t want to be right in the center of town – it is also called ‘Lagadin.’ This beach is family-friendly and great for kids and lunch.

There is usually music to listen to as well. This is the place to go for some R&R, breathe deep, and enjoy the tranquility.

A tiny traditional fishing village on Lake Ohrid’s shores near the Albanian border, Trpejca has become a favored summer destination in recent years. It’s become so popular that locals have started calling it the “Macedonian Saint-Tropez.” Even though there’s only one school, one church, and only a few stores, there are several accommodation options.

In summer, Trpejca is an excellent destination for outdoor activities ranging from swimming, sunbathing, and snorkeling to boating and hiking. A small strip along Lake Ohrid serves as the local beach, which, thanks to its surroundings, is one of the best beaches in Macedonia.

Letnica is the largest cafe at the end of the charshija – the main strip or walkway in Ohrid.

Some cities have a korzo, and others have an esplanade or a Riva; in Ohrid, it is the charshija, and as usual, it is the place to see and be seen. Letnica is on the left side, taking up almost an entire corner, and is opposite the lake. A great place to sit and watch people while enjoying good coffee. You can also order basic food here, such as ham and cheese toasted sandwiches, pancakes, and ice cream – it might not be on the drinks menu, but ask the waiter, and he’ll order it for you 😉

The liquid is a stunning cafe that doubles as a nightclub in the evening (if nightclubbing is your thing, then Liquid should be on your list of places to go!).

Liquid is located right on Lake Ohrid’s water in the old part of town, within walking distance from the center. Great coffee, great food & drinks, but most importantly, great view, It is one of a kind in that it is so chilled out during the day, but by nightfall, it is cranking!

The best way to get here is by one of the small boats on the lake. Men are waiting to take tourists on tours around the lake to see the view of Ohrid from the water – definitely do this!

On the way, ask him to let you off at Potpesh for half an hour or so – a tiny cafe unseen from the shore. Not many people come here as they don’t know about it; it is definitely a locals-only spot. You can only sit outside, and there are only 2-3 tables. You’ll feel as though you’ve gone back in time. Well worth a visit if you get the chance.

Make sure to try these tasty, traditional foods if you see them on any of the menus! 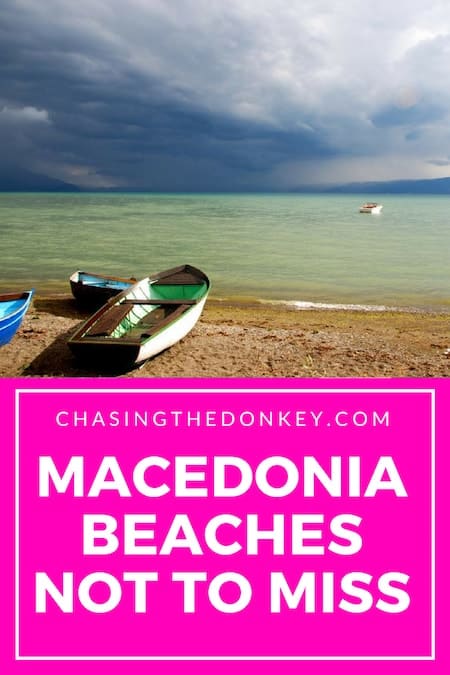 There is so much more to Ohrid than just this, more fabulous beaches, restaurants, and cafes and  SO much more history and places to see. Stay tuned for part two, where I’ll show you all this and more.. your front-row seat awaits!