Ohrid is known as Macedonia’s jewel for a good reason. This city’s cultural heritage and natural beauty are so great that the entire city and its region are designated as a UNESCO Heritage Site.

The number of visitors in Ohrid increases every year, and there are always some new, hot restaurants that want to cater to as many different taste buds as possible. However, there are still classic restaurants in Ohrid (primarily serving Macedonian, continental, and Mediterranean food), and in this article, we’ll share the best of them.

Oh, and if you need to know – here is how to tip in Macedonia.

This family-owned restaurant is located next to Ohrid’s ancient amphitheater that was built in 200 BC and hosted all kinds of different events throughout the years, including Gladiator battles, which is where the restaurant’s name comes from. The owner’s family lived in the house, which is where restaurant the located for a couple of hundred years. Gladiator has a good selection of continental food and some fantastic coffee.

Many locals stop by for a cup of coffee in the morning to enjoy the view; from the restaurant’s terrace, you can see the old amphitheater, the Church of Holy Mother of God, and the beautiful Galicica Mountain peeking from the background.

Overlooking the crystal-clear waters at Kaneo Beach, Letna Bavča Kaneo is the best restaurant in the region. The menu features a selection of Traditional Macedonian food and many fish-based dishes cooked with aromatic herbs.

It’s one of the priciest restaurants in Ohrid, but the view of the beach and the Kaneo Monastery in the background is worth it. However, keep in mind that even though it’s located next to the beach, this is not a beach bar but a restaurant.

A less luxurious version of Letna Bavča Kaneo, Kanevche also serves some fantastic traditional food and fish dishes and has almost the same view because it’s located right next to it.

Finding a table around dinner and lunchtime is a real challenge in both restaurants during the peak season. One thing Kanevche is famous for (and you absolutely have to try) is the deep-fried plasica (tiny local fish)

The Sveta Sofija Restaurant is named after the church located across the street, which also happens to be one of the oldest ones in Ohrid. You absolutely have to try their local trout dishes and the “monastery cheese,” but that doesn’t mean that’s all they have.

Their food features the best of Macedonian cuisine, and they have a selection of more than 100 of the finest Macedonian wines. Occasionally, there’s also live music, which further enhances the romantic atmosphere of the restaurant.

If you get a late-night pizza craving, Leonardo is probably the best pizza place in town. Hence, it’s no wonder that the business is packed when dinner time comes.

If you don’t like crowded places, you can take your pizza to go, but if you can, try to get a table at the terrace overlooking the beautiful gardens of St. Nikola Bolnicki.

Located in a traditional Ohrid house on Kosta Abrash Street, Čun is one of the classiest restaurants on the lakefront. You can sit outside on some of the tables located right next to the shore during summer and spring.

If you want to try some great local fish dishes, this is the right place for you, but the restaurant also has a great selection of continental food. A lot of people choose it as a breakfast destination because of its unique location. After all, what’s a better start to one’s day than having breakfast and a cup of coffee right next to the lake?

If you’re a fan of Italian cuisine, only a few places in Ohrid can compare to Via Sacra, but that’s not the only thing they serve. They have a delicious selection of traditional Macedonian food as well, combining the best from both worlds.

The surrounding cobbled streets of Ohrid’s Old Town make the ambient in the restaurant even more appealing, drawing hundreds of visitors every night during the peak season.

Belvedere is located on the border between Ohrid’s Old Town and the new part of the city, only 50 meters away from the harbor, and is one of the best places in Ohrid when it comes to barbecue and fish.

If you’re passing by in this part of the city, the tempting aroma coming from the restaurant’s kitchen will inevitably lure you to visit. During the peak season, there’s live acoustic music every night, creating a very special ambient. Belvedere ranks at the top of all lists when it comes to restaurants in Ohrid, and there’s undoubtedly a good reason for that.

Without a doubt, this is the best coffee place in Ohrid. Most of the tables are placed on the balcony that’s literally hanging over the lake, giving an incredible view of the Ohrid Lake and Galicica Mountain in the distance. The coffee here is absolutely amazing, but they also serve some light snacks, making it a perfect place for an aperetivo-like dining experience.

As the name suggests, this taverna’s menu offers the perfect mix of Mediterranean and Macedonian cuisine. Saying that Taverna Momir’s chefs are the most creative chefs in town when it comes to fish dishes is not an overstatement. This restaurant has arguably the best trout in town, and the fish soup is finger-licking good as well.

Located on the coast close to the city center, Aleksandrija is the perfect place for a quiet breakfast. Their bakeries prepared in a wooden oven are a must, and their pizza is quite good too. The restaurant also has a great selection of traditional soups, barbecues, and delicious Mediterranean salads.

Conveniently located at the corner between Ohrid’s Tourist Street and the Boulevard Macedonian Educators, Bistro Corner is one of the most modern and chic bistros in town.

It’s one of the locals’ favorite coffee spots, and there’s a good reason for that. Bistro Corner also has a selection of amazing cakes and desserts, and saying that this is one of the best dessert places in Ohrid wouldn’t be an exaggeration. 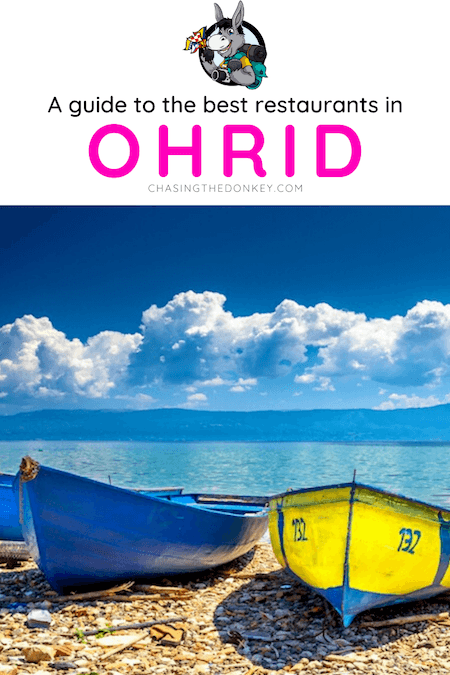 Located at the end of the Riverfront walking street, the Biljanini Izvori Restaurant (Biljana Springs Restaurant) is one of the best choices for a romantic dinner in Ohrid.

The restaurant serves possibly the best grill in town, and they have some tremendous Macedonian dishes and continental food. While you’re there, also try their own rakija (a local spirit made from different fermented fruits).

This restaurant is outside of the city next to St. Stefan beach, and you’d have to take a van or public bus in order to reach it, but it will be worth it. Tino has some of the finest Macedonian traditional food in Ohrid.

You absolutely have to try the Tavce Gravce here! If you can come here for dinner, you can enjoy the view of the sun setting behind the waters of St. Stefan beach and enjoy the live music available every day during the peak season.

If you did some research about Ohrid, you know that no trip to this city is complete without visiting St. Naum; a beautiful monastery hanging off a cliff located southeast of Ohrid. Thousands of people come to visit this fascinating site every day during the peak season, and during this time, it’s challenging to get a table at Ostrovo. Since the restaurant is a bit off-the-beaten-track, the prices are a bit higher, but the food is nothing short of magnificent.

Address: southeast side of Lake Ohrid, next to the monastery of St. Naum Ohridski, Ohrid, 6000

Did you ever visit Ohrid and some of these restaurants? Which one was your favorite, and which one would you go to first if you were to see Ohrid? Let us know in the comments.