Home > 16 Most Famous Festivals In Macedonia

We previously wrote about archaeological sites in Macedonia, showcasing the rich history of this small country and in this post, we’ll focus more on the people and their unique traditions and festivals.

Some of these festivals are several centuries old and have been passed from one generation to the next while others are relatively new but always attract a lot of visitors.

From celebrations of traditional regional folklore to musical events that feature prominent musicians from around the world, here are the most famous festivals in Macedonia! 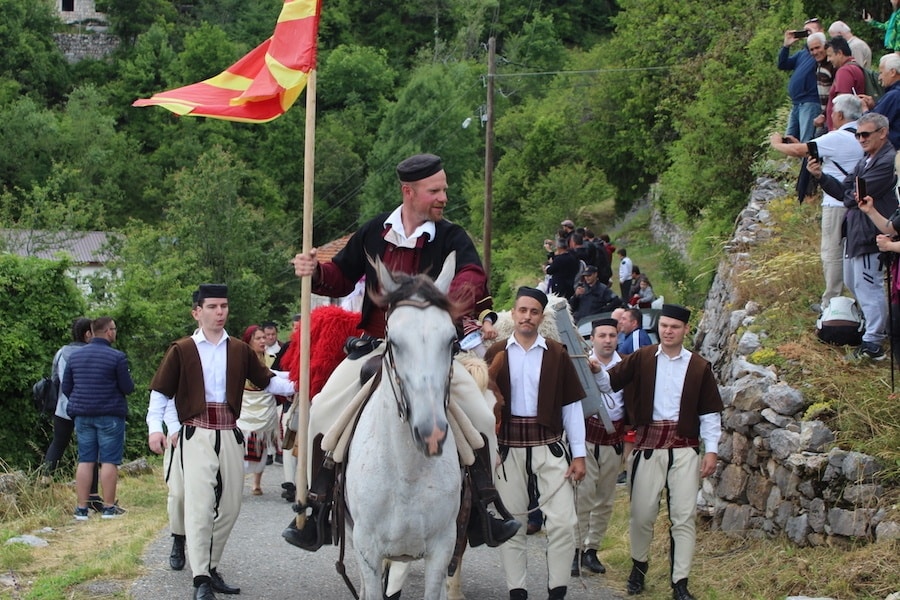 Hidden between Macedonia’s highest mountains, the picturesque village of Galicnik is one of the most photogenic places on the Balkan Peninsula. However, nature isn’t why Galicnik is on this list.

The small village is famous for preserving a tradition that’s several centuries old; a wedding that lasts for an entire weekend and features a traditional celebration in which the groom takes the bride on a horse while loud traditional Macedonian music echoes among the mountains.

The celebration is held on the Saturday closest to St. Peter’s Day (according to the Orthodox Christian Calendar).

In the past, it was very common to see more than 40 couples getting married on the same day. Today, the numbers are quite lower, but still, it’s a great day for the village of Galicnik that official has only 2 residents but on this day sees thousands of people from around the region that come to witness this fascinating tradition.

If you want to see an impressive sample of Macedonian and Balkan folklore, the Balkan Folklore Festival in Ohrid is a great choice.

Every year, more than 40,000 folk singers, dancers, instrumentalists, and artists from Macedonia, Serbia, Albania, Montenegro, Greece, Croatia, Bosnia and Herzegovina, Bulgaria, Turkey, Romania, and Hungary participate in this festival, showcasing their regional traditions which are at least several hundred years old. The festival’s origin dates back to 1962 and it’s always held in the first half of July. 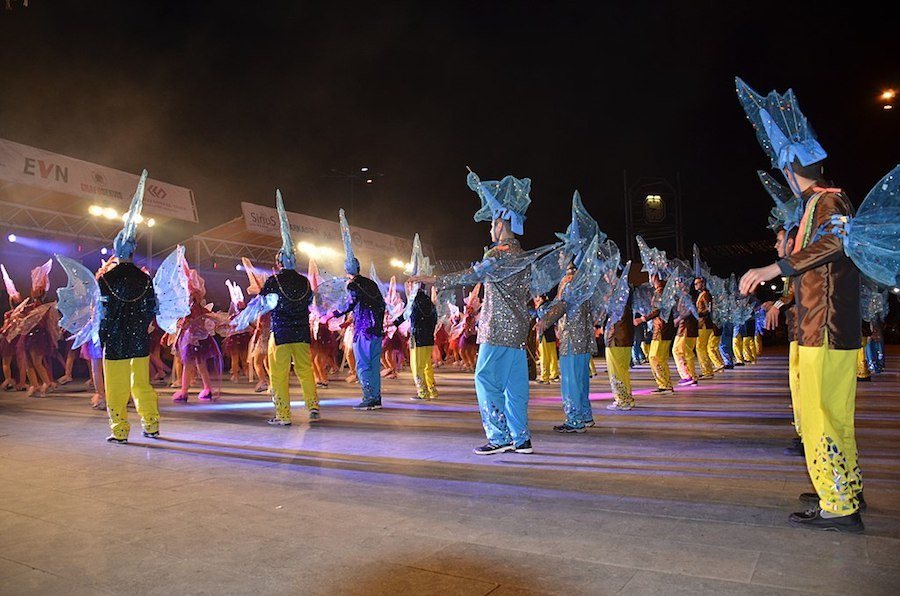 Dating back to the 1670s, the Strumica Carnival may very likely be the oldest, still-ongoing festival in Macedonia. The carnival is held on the first days of the Great Lent (again, according to the Orthodox Christian calendar).

The carnival lasts for three days and includes a series of events, such as dance and musical performances, mask parades, and processions that take place at the main streets of Strumica with the latter being the key element of the carnival. According to local customs, taking off the masks symbolizes getting out of one’s comfort zone and asking for forgiveness in the eyes of one of the largest Orthodox Christian holidays.

The Ethno Festival in Krusevo is the longest traditional festival and one of the most important festivals in Macedonia. This festival takes place between the 15th of July and the 15th of August. The festival also features the main event of the Republic Day (Ilinden) at the 2nd of August.

During this month, in Krusevo, you can see a lot of locals dressed in authentic traditional Macedonian clothes walking around the streets of Krusevo while doing their daily duties. This festival represents the Macedonian fight for freedom and commemorating the Ilinden uprising of August 2nd, 1903. 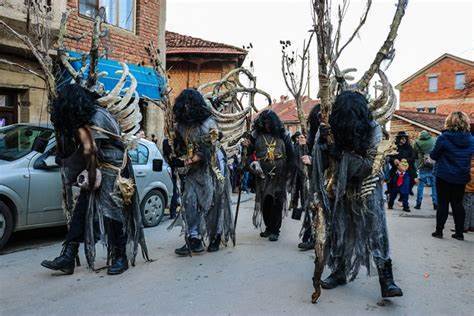 If there’s an ongoing festival in Macedonia that’s older than the Strumica carnival, it would be the carnival in Vevcani. Even though no one is sure when exactly did this carnival start, some historical sources link it to pagan rituals that date back to 1,400 years ago. However, the only pagan motive that remains today are the masks while the reasons for the celebration are different.

Today, this carnival commemorates the Orthodox Christian New Year and the ritual calling of St. Basil the Great. Because of this carnival, the small village of Vevcani is a part of the Federation of European Carnival Cities and this event attracts thousands of local and international visitors.

Struga’s Poetry Evenings is the oldest international poetry festival and as such, one of the most prestigious poetry events in the world. The event was established in 1961 and since its humble beginnings, it grew to become one of the largest poetry festivals in the world, attracting more than 5,000 poets, literary promoters, publishers, and writers from around the world.

You can see the greatness of an event when you see some of the most famous poets that participated in this event, such as Mahmoud Darwish, W. H. Auden, Sachchidananda Hirananda, Pablo Neruda, Joseph Brodsky, Allen Ginsberg, Bulat Okudzhava, Eugenio Montale, Vatsyayan Agyey, etc.

The Poetry Evenings traditionally take place during the third week of August every year. Needless to say, when this event is on, nothing else matters in Struga.

When the month of May is mentioned in Skopje, the first thing people think about are the May Opera Evenings. This festival of classical music and opera is held every year in the month of May and it dates back to 1972. During the first year, the event consisted of the Macedonian People’s Theatre orchestra performing one of the oldest Macedonian operas, “Tsar Samuil” on the 9th of May, 1972.

However, this performance attracted a lot of interest and next year, the event took the form of a festival. Throughout the years, the May Opera Evenings have attracted more visitors and performers from around the globe.

Over the years, Skopje’s May Opera Evenings have attracted thousands of visitors and performers from around the globe and hosted more than 1,200 performers from 21 different countries and 280 separate performances. If you like classical music and/or opera, you will definitely love this festival.

Check out more ways to explore Skopje with this guide!

If you’re a theater lover visiting Macedonia in October, head to Kumanovo and you won’t regret it. Days of Comedy is a regional 23-years-old festival that features comedy plays from several different countries, including Serbia, Bulgaria, Montenegro, Albania, and Greece.

The festival aims to enrich the Macedonian theater scene by giving the audience a chance to see some of the best comedies from the last year. The festival lasts for two weeks and features one comedy play every day. 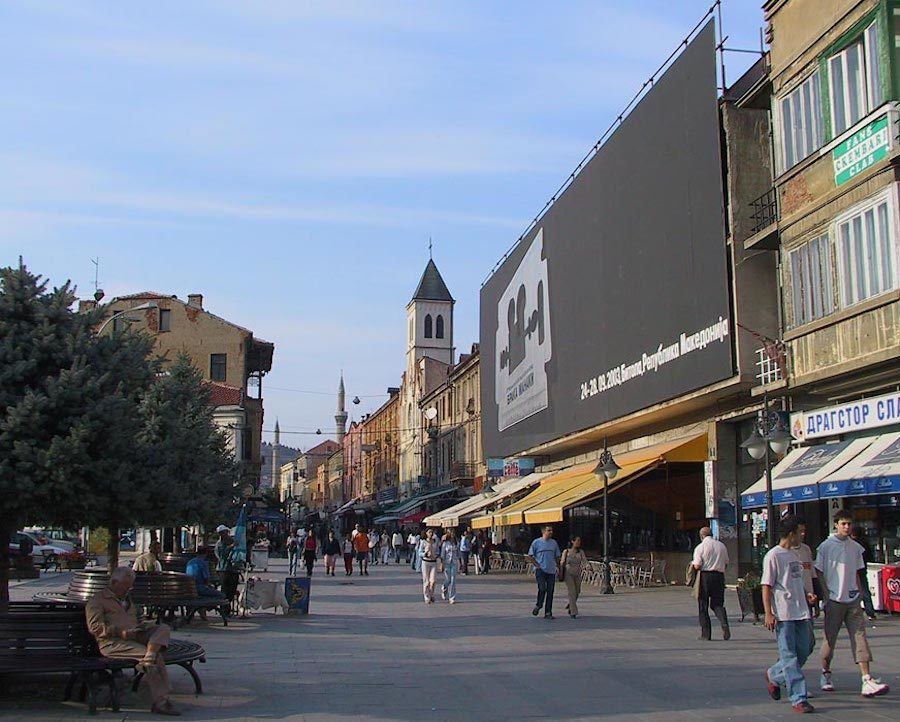 In case you’re not familiar with Milton and Janaki Manaki, they were one of the cinema pioneers not only in Macedonia but in Europe too. Their film, the Weavers (1905) was the first movie created in the Balkan Region (at the time, Macedonia was still a part of the Ottoman Empire).

Today, in their honor, the Macedonian Film Professionals Association organizes the annual Manaki festival in the city where the brothers filmed most of their work, Bitola. The film festival attracts hundreds of famous directors and actors every year. The main award of the festival is the Camera 300 given to the year’s best motion pictures chosen by the festival’s film committee. 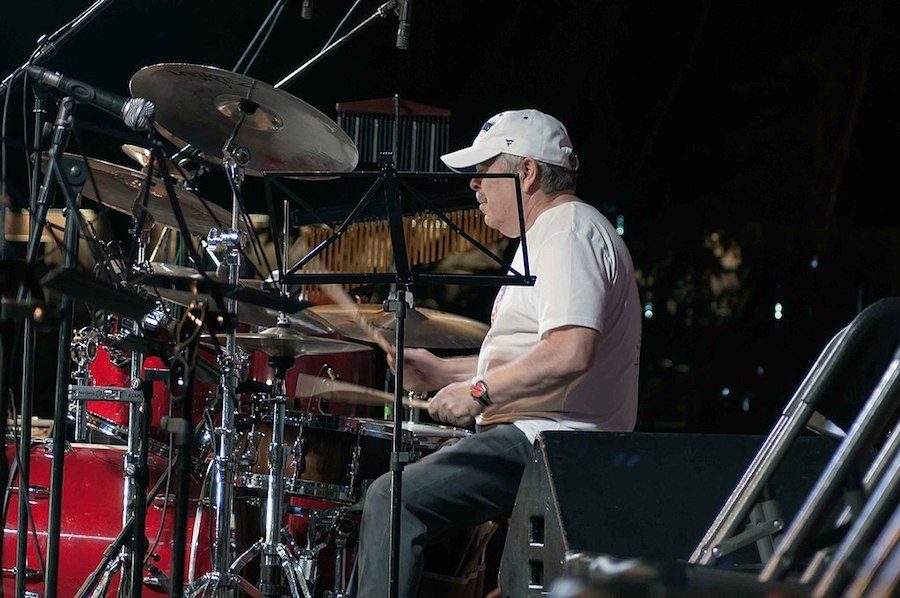 Since its modest beginnings in 1982, the Skopje Jazz Festival has transformed into one of the leading jazz festivals not only in Macedonia but in the entire Balkan region too.

The festival is organized by a non-government non-profit organization with only one goal; to give the audience the chance to see some of the world’s best jazz performers. Today, the festival draws hundreds of international visitors by hosting some of the world’s most famous jazz performers, such as Ray Charles, BB King, Herbie Hancock, Tito Puente, James Carter, Eliane Elias, Ornette Coleman, Pat Metheny, Stanley Clark, Chick Corea, Joe Zawinul, and many others.

If you’re a jazz lover and want to see some of the world’s best jazz artists, you should definitely consider adding a trip to Skopje in October on your agenda. 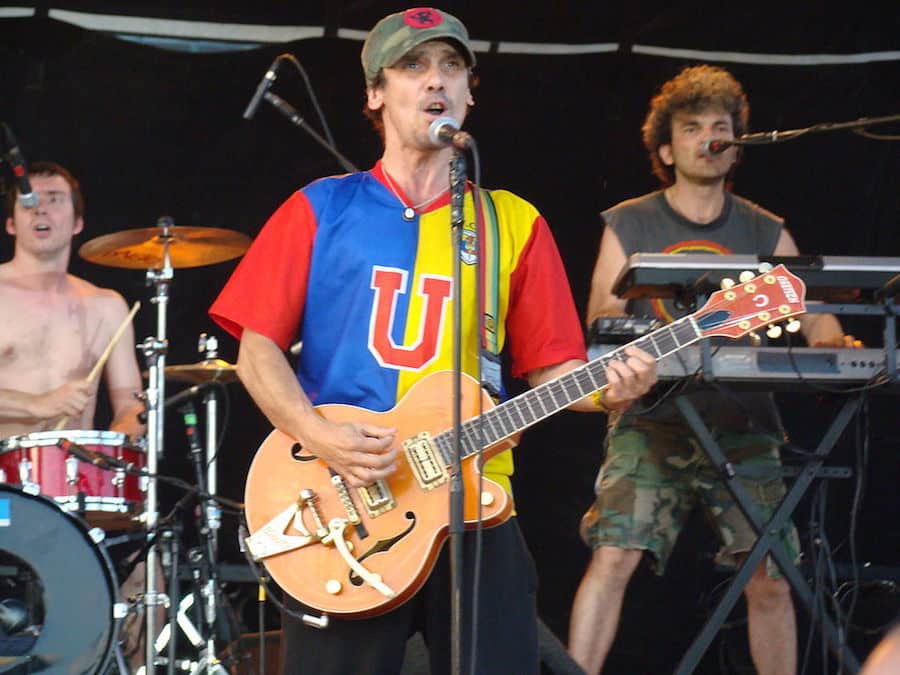 Just like every other capital in Europe, Skopje has its own great music festival. Even though not as glamorous as some of the world’s most famous festivals, Taksirat is one of the largest festivals in Macedonia and a beacon of international musical diversity.

The festival has hosted some renowned musicians such as Kaiser Chiefs, Manu Chao, Iggy Pop & the Stooges, The Ramones, The Stranglers, Juliette Lewis, Kreator, etc. As you can see from the performers’ list, this festival has something in store for everyone and in addition to the great music, you can also taste some delicious local food and try some great Macedonian beers and wines.

Usually, this festival takes place near the end of November and lasts for one week. 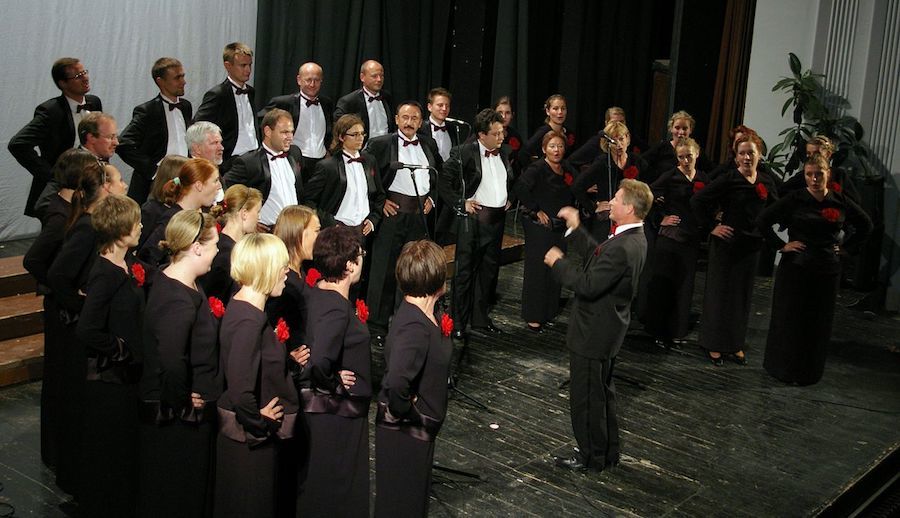 Ohrid Summer Festival is probably the greatest summer music festival in Macedonia. Summers in Ohrid are crazy and this festival is a big reason why that’s the case. Ohrid’s Summer Festival lasts for over a month (12 July- 20 August) and it takes place at Ohrid’s Ancient Amphitheater with Lake Ohrid peeking from the horizon.

The festival is a real cultural feast and consists of music concerts (including classical music and opera), dance performances, and theater plays.

Check out other great ways to explore Ohrid in this guide!

Strumica’s OPEN Festival is one of the newer additions to the festival scene in Macedonia. The festival is only 10 years old and the performers aren’t as nearly as famous as the ones you could see at Taksirat or Ohrid Summer Festival, but this doesn’t mean the atmosphere isn’t great.

If you couldn’t figure it out from the carnival mentioned above, Strumica sure knows how to party. The festival takes place in July and lasts for 10 days. During these days, you can see all kinds of crazy events, from concerts and dance performances to guitar lessons, dance battles, and all kinds of quirky competitions. 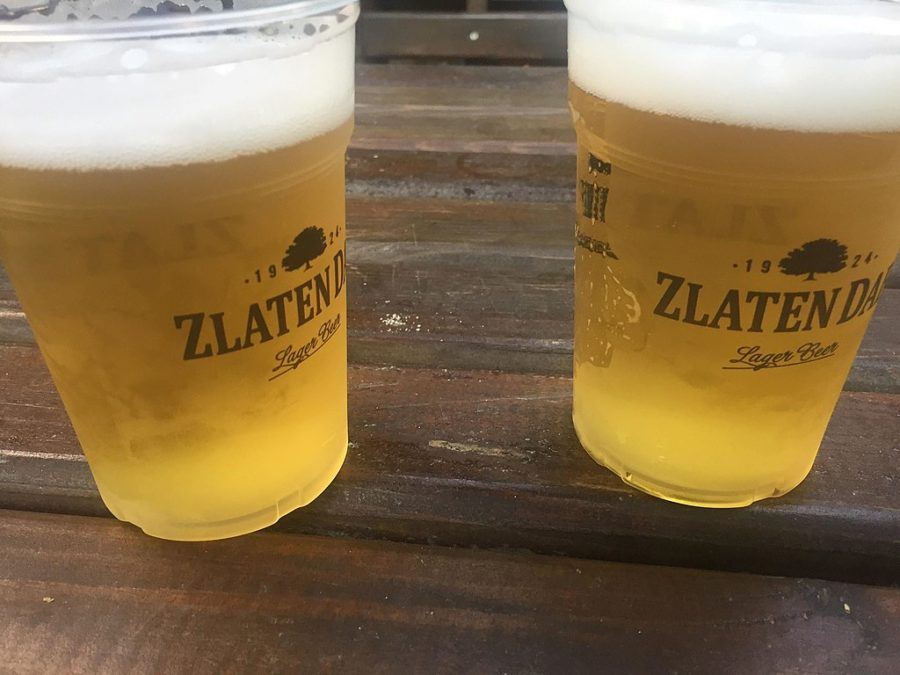 The city of Prilep is famous for its centuries-old beer tradition and it’s no surprise that some of the best beers in Macedonia (like Krali Marko and Zlaten Dab) originate from this city.

The name of this festival is rather self-explanatory; it’s a beer festival where visitors can taste some of the best local and international beers and enjoy some amazing local barbecue while partying like crazy. You won’t find many international musical performers at this festival as the spotlight is always reserved for local and regional stars but this doesn’t mean you can’t have a great time!

If Italy has pizza, Macedonia has pastramajlija and the city of Stip is the best place to try it. The name of this dish is a real tongue-twister, but you won’t care much about it as soon as you taste this delicious meat pie. As the name of the festival suggests, this event is devoted to tasting local pastramajlija but the event is also enriched with artistic and musical performances, folklore dances, and, of course, a lot of beer! 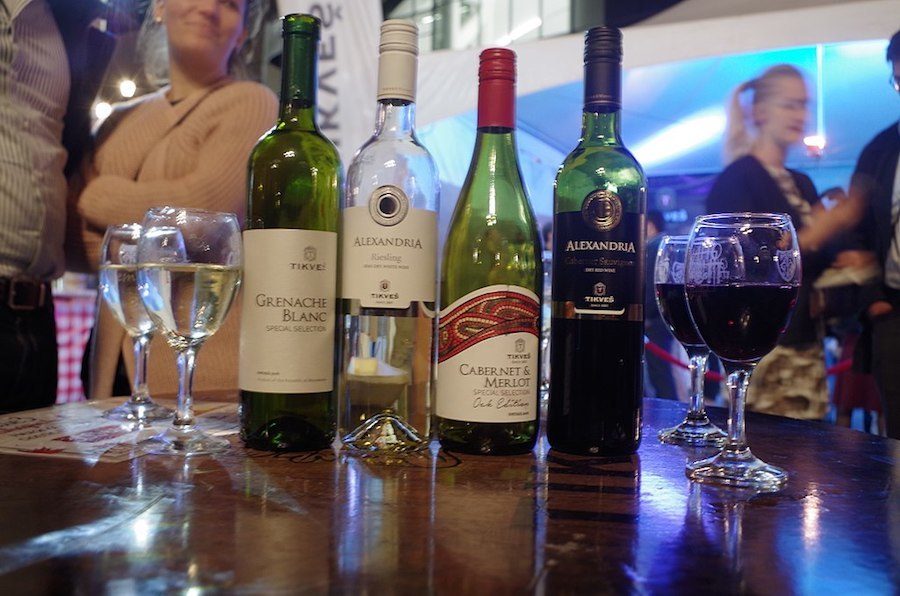 Finally, no festival season in Macedonia is complete without some tasty Macedonian wine. The Tikvesh region is home to some of the finest wines on the Balkan Peninsula and the traditional wine harvest festival that’s been going on since 1964 is something you wouldn’t want to miss if you’re a wine lover. The festival takes place in September and features a lot of music, dancing, a carnival parade, and choosing a king and queen of the wine harvest.

Did you like this list of the best festivals in Macedonia? If you visit Macedonia, which one would you like to attend the most? Let us know in the comments!