Most Interesting Museums In Skopje, Macedonia

Most Interesting Museums In Skopje

If you want to learn a lot about a new city or country, the best place to start is the museums. Like all European capitals, Skopje has many fascinating museums where you can learn a lot about the city and the history of Macedonia. In this article, we’ll cover the most exciting museums one should visit while in Skopje.

The first museum you should head to is Skopje’s City Museum. Despite the lack of financial support and the bad condition of the building that hasn’t been renovated since the 1960s, this museum has a lot to offer. Inside, you’ll find a collection consisting of more than 20,000 artifacts from different parts of Skopje’s history.

Some of the exhibits include the statue of Adam from Govrlevo (at least 6,000 years old and one of the world’s most impressive Neolithic artifacts as it is arguably the first representation of human figure), vintage objects and art from the Ottoman Era and Yugoslavia, as well as a myriad of archaeological artifacts related to the city’s history.

The museum is located in what was once the most modern train station on the Balkan, but after the big earthquake of July 26, 1963, most of it was left in ruins. The giant clock on the façade stopped working when the earthquake started and has since been stuck at 5:17 to serve as a memory of the victims of arguably the biggest natural disaster of Skopje’s history.

Museum of the Macedonian Struggle

Opened in 2011, the Museum of Macedonian Struggle is one of the newer museums in Skopje. It was opened on the 8th of September to commemorate the 20th anniversary of Macedonian Independence.

The museum portrays the darkest and most painful moments of Macedonia’s medieval history from the Ottoman occupation until 1991, when Macedonia got its independence from Yugoslavia. The museum consists of 13 rooms, each of which is filled with precious artifacts dedicated to different aspects of the Macedonian struggle. The museum also features wax figures of some of the most influential people of Macedonia’s medieval history. The visit to the museum includes a guided tour with an English-speaking guide.

The Museum of Macedonia is a complex of a few different museums located at Skopje’s Old Bazar Street next to the Mustafa Pasha Mosque. The complex consists of the Historical Museum, the Ethnographic Museum, the Icon Gallery, the Natural History Museum, and the Kursumli An.

All museums together house around 70,000 valuable artifacts, including icons and religious mosaics, traditional clothes, paintings, and many statues, with the most famous one being the Great Mother/ the Goddess of Fertility.

The Museum of Contemporary Art was opened in 1964, one year after the catastrophic earthquake, and is a symbol of solidarity of all nations worldwide that solidarized with Skopje during the city’s most challenging days.

The museum is located between the Kale Fortress and the massive US Embassy. It is home to hundreds of contemporary art pieces from Macedonia and abroad, with some of the most interesting pieces being Picasso’s and Calder’s paintings. All of the paintings were donated to Skopje and featured in the only permanent exhibition named “Solidarity, an incomplete project.”

If you can, visit this museum on the first Friday of the month; on this day, the entrance is free for everyone.

If you’re a fan of illusions, you shouldn’t miss visiting one of Skopje’s newest museums. Visiting this place will take you to a whole new world of dazzling illusions where the lines between the normal and abnormal fade away.

The museum consists of three floors and is perfect for a group of friends or even for families. Some of the most interesting sights include wild animals appearing out of nowhere, the bottomless elevator, and the labyrinth of mirrors. If you decide to visit, check out their projection room and try to solve one of the most mind-bending puzzles you ever saw.

Located in an old, 15th-century Turkish bath, the National Gallery of Macedonia is one of the most interesting museums in Skopje.

The gallery’s collection features some of the most impressive Macedonian artwork between the 14th and the 21st century, including abstract art, religious icons, nationalist artwork, and modern art.

The collection is so huge it has to be divided into three separate locations- the old Daut Pasha bath, which by the way, was once the largest Turkish bath outside of Istanbul, the Cifte Hammam (another 15th-century Turkish bath), and at Mala Stanica Multimedia Center. How many other galleries around the world that you know of are located in an old hammam?

Located next to Skopje’s zoo, the Museum of Natural History collects, stores, and displays Macedonia’s natural wealth and heritage and is one of the oldest museums in Macedonia (it was built in 1926).

The museum is home to 270,000 different exhibits, including specimens of minerals, rocks, fossils, stuffed animals, and insects. Additionally, the museum also has thematic exhibitions and educational events for children, if this is something you might be interested in. If you’re planning to visit the Skopje Zoo, you should definitely take a look around.

The Archaeological Museum of Macedonia is one of the newer museums in Skopje, but it’s already making headlines. It was recently included in the top 15 museums in Europe, according to the European Museum Academy (EMA).

The museum boasts over 7,000 artifacts related to Macedonian history from different historical periods. Every single artifact hides an interesting story and is a crucial part of Macedonia’s cultural heritage, tradition, and values. Some of the most interesting exhibits feature the copy of Alexander the Great’s sarcophagus, the statue of Venus Boadicea, 15 wax figures, 83 paintings, and fascinating mosaics.

The museum is located in the heart of Skopje in one of the most striking buildings in the city center, and it’s nearly impossible to miss it even if you want to.

Even though technically not a museum, Scupi is an important archaeological site that you would love to visit if you’re a fan of museums and history.

The site is located between the Vardar River and Zajcev Rid (The Rabbit Hill), and it was one of the most important cities in the region during the Roman era. Scupi was a self-governing military colony until it was abandoned in 518 AD, and seeing the remnants of this once great city will surely give you the chills. If you want to reach it, the best way is to either take a cab, rent a car, or take bus number 21.

The Holocaust Memorial Center was opened in the old Jewish Quarter to commemorate the 7,144 Macedonian Jews who were taken to German concentration camps by the Bulgarian Army that occupied Macedonia at the time.

Even though this might not seem high, this was 98% of the Jewish population in Macedonia. The museum has numerous exciting exhibits that tell the sad history of the Jewish community in Macedonia and a few must-see movies that are regularly displayed. The funds to build this memorial center were from the sales of the victims’ property in cases where there were no heirs.

This is probably Skopje’s least-mentioned exhibition center where visitors can learn about the history of electricity and electric energy production.

It’s the first and only exhibition center of its kind in Macedonia. The exhibition center is located in the old building at the hydroelectric power plant, which is also a great chance to see the 80-year-old facility producing energy from the dam at the Matka Canyon.

If you plan a trip to Matka, taking 15-20 minutes to check out the exhibition center is probably a good idea. However, keep in mind that the center is only opened between April and October and is open every day except Monday.

As you may or may not know, Mother Teresa was actually born in Skopje and is the only Nobel Prize Winner from Macedonia. 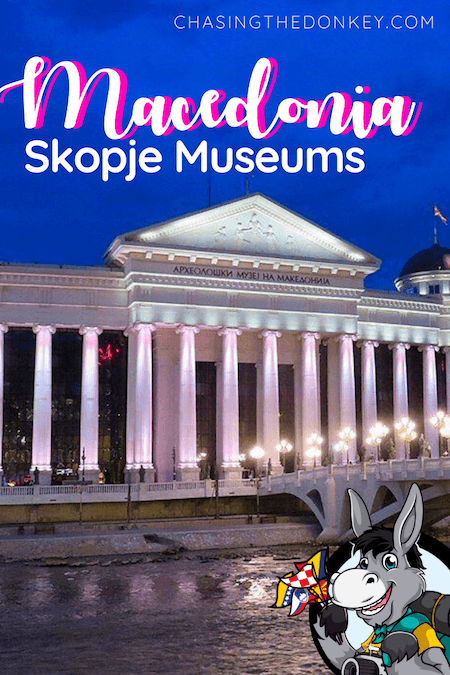 Which one of these was your favorite? Which museum in Skopje would you visit first? Let us know in the comments!