Best Things To Do In Batumi, Georgia

Home > Best Things To Do In Batumi, Georgia

Best Things To Do In Batumi, Georgia

The beaches and calm waters are a favorite for relaxing and swimming, while Batumi’s long boulevard is always lively. It’s the perfect place for strolling and exercising or simply for eating and drinking in the sea breeze. 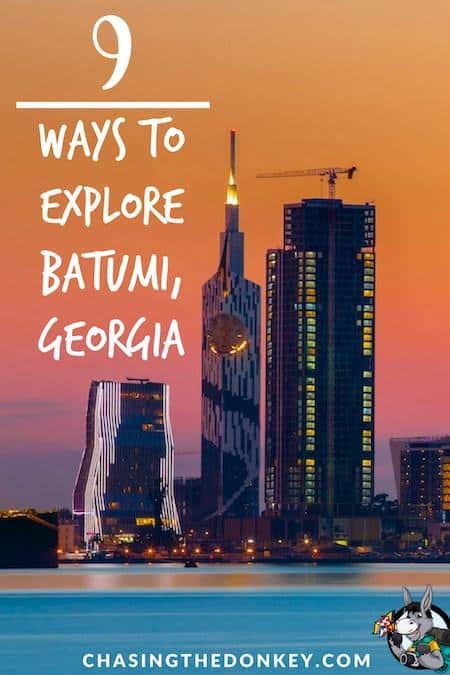 Batumi is a city surrounded by greenery, with botanical gardens and national parks, offering the chance for outdoor walks and hiking trips amid spectacular Georgian scenery. Among the verdant landscapes, the region’s intriguing history awaits, too, with Roman ruins to be found and traditional Georgian villages to be explored not far from Batumi.

The Black Sea location, lively city life, and warm weather make Batumi an absolute favorite among travelers. Combined with the fantastic food and Georgian hospitality, it’s a destination that will only ever become more popular.

Batumi’s signature attraction is the long, extensive boulevard that runs for miles along the Black Sea. The boulevard is always full of walkers, runners, and cyclists enjoying the ocean air, but it’s not just a seafront walkway. It’s much more than that. The Batumi Boulevard is the heart and soul of the city, dating back to 1884. Since then, it has grown and extended, survived wars and communism, and is still loved by locals and visitors alike for its sights and atmosphere.

Along the length of the boulevard are restaurants, bars, and an infamous nightlife that can last far into the early hours of the morning, long after the colorful sunsets over the Black Sea have faded. There are statues, art installations, and cafes. Grab a bike or a good pair of shoes and walk the whole length to really experience Batumi.

Enjoy The Beautiful Black Sea Beaches In The Batumi Sunshine

Batumi and the surrounding region of Adjara are home to Georgia’s best stretch of coastline. Looking out over the Black Sea are beautiful beaches that are best enjoyed during the long summer days but still look spectacular all year round. Some are pebbly, others are sandy, but there is a beach for all tastes near Batumi.

The beaches are full of sunbathers and deckchairs along the boulevard, while many of the bars spill out onto the seafront. Further away, head to Mtsvane Kontskhi beach for peace and quiet, and breathtaking coastal views of lush green scenery just outside of the city, while the charming village of Shekvetili is home to resorts and an unusual black sand beach.

Batumi’s subtropical climate lends itself well to the growing of unique plants and vegetation worldwide. At the Botanical Gardens, hundreds of species of plants from countries as diverse as New Zealand and Mexico are grown and shown in a colorful setting.

The botanical gardens have been maintained since 1912, and as impressive as the multitude of varied plants, flowers and trees are to walk through, the real attraction is the absolutely stunning clifftop setting where the gardens are found, a place known locally as the Green Cape for its lush, subtropical fauna and expansive views along the coastline of Batumi.

Ride The Cable Car To The Top Of The Mountain

From the Batumi Boulevard to the top of the nearby Anuria Mountain, a 2.6-kilometer cable car experience offers supreme views over Batumi, the Black Sea, and the surrounding mountains. At the top of the cable car route awaits a wide viewing area where a restaurant and cafe serve delightful Georgian delicacies and Georgian wines with a view to match.

The Piazza lies in the heart of the old town of Batumi. Still, this glamorous square is really a very new affair, designed to give the city a fashionable dining and events area with a traditional yet modern feel. The design worked. Nowadays, the Piazza is an elegant place to dine out, relax with a coffee or enjoy a few drinks in the evening while surrounded by beautiful Georgian architecture in the center of Batumi.

Stand In Awe Of The Makhuntseti Waterfall

Just a half-hour drive from Batumi, the Makhuntseti Waterfall flows powerfully in the hills, surrounded by beautiful scenery. The waterfall is close to picturesque, traditional Georgian villages, too. So, after standing in awe of the cascading water at Makhuntseti, head to the villages and the ancient arched Makhuntseti Bridge for a look at Georgian life that is unchanged in centuries.

Near Batumi, some of Georgia’s best national parks offer an escape from the city. At Mtrila National Park, northwest of the city center, are excellent hiking routes that wind their way along rivers, past waterfalls, and through humid, subtropical forests known for their heavy rainfall, as well as green and lush scenery.

Southeast of the city is Machakhela National Park, on the nearby border with Turkey. This is a mountainous region of long gorges and spectacular riverside walks, a place of historic villages and green forests that might just need more than one day trip from Batumi to really appreciate.

A few kilometers to the south of the city center lie the ancient ruins of Gonio. An old fortress that dates back to the days of the Romans, it was built as a fortified outpost on a far frontier of the empire. On the coast of Gonio are also some of the best beaches in the region, making it the perfect day trip from Batumi. Explore the ruins, then relax on the beach!

To the north of Batumi, another ancient ruin in the village of Tsikhisdziri can be found. Here, the remains of the Petra Fortress line the coast thought to be part of a larger Roman-era city, which was eventually lost and abandoned.

No trip to Batumi is complete without gorging on Adjaran Khachapuri. This Georgian specialty is baked all over the country, but Khachapuri takes on a distinct shape and flavor in every region. It’s a hearty dish of cheese-filled bread, and in Batumi, Khachapuri is huge, boat-shaped, and cooked with a heart-attack-inducing quantity of cheese, butter, and egg to create a delicious local delicacy.

Did we miss something? What other things to do in Batumi would you add to the list?