Guide To Swimming The Black Sea Coast Of Türkiye

Home > Guide To Swimming The Black Sea Coast Of Türkiye

Guide To Swimming The Black Sea Coast Of Türkiye

Everyone should visit the Black Sea region at least once in their lifetime and bask in the tranquillity of a village on the top of a misty mountain. The area is full of peace and spectacular scenery. Plus, the culture and cuisine of the Black Sea region are a whole new world of Turkey for those who aren’t familiar.

If you’re planning to break your go-to route and try something new on your next holiday, you can try visiting the Black Sea coast of Turkey. And if you need a guide for this new route, we’re here to help you with a guide to swimming the Black Sea and the best beaches along the Turkish Black Sea!

The Turkish Black Sea Coast – A Heaven Of Green And Blue

Most people see the Black Sea region as a replica of heaven; it’s the meeting spot of green and dark blue, mountains of unfathomable scale, and a sea of raging waves. This wonderful area boasts a unique culture and its own cuisine.

When a person in Türkiye says “Black Sea,” they often refer to the eastern Black Sea region, which include the Black Sea cities of;

Although this has a cultural reason, the genuine Black Sea region extends to a larger area and includes many other cities, such as

The region is known for its natural beauty, lush green forests, and untouched beaches. The Black Sea coast of Türkiye is also home to many charming towns and villages that offer a glimpse into the traditional way of life.

What You Need To Know About Swimming In The Black Sea

Why is it called the black sea: Although it’s hard to tell why people called it the “Black Sea,” the common belief is that the dark color of the sea is the reason. Although we’re not sure this is why people called it like that, the Black Sea is really dark in color due to the high amount of dissolved organic matter and sediment in the water. The color comes from the large number of rivers that flow into the sea, and their sediment loads, which do not mix with the water masses.

Are there sharks in the black sea: Yes. Several shark species live in the Black Sea, including the Black Sea shark, the Spiny dogfish, and the smooth-hound shark. However, since overfishing caused a depletion in the shark population, your chances of seeing a shark are low.

Where does the black sea start and end: The Black Sea is bordered by several countries and connected to the Mediterranean Sea through the Bosphorus Strait. The Black Sea’s northern coast is in Eastern Europe, and the southern coast is in Western Asia. The sea also starts at the Bosphorus Strait and ends at the Bosporus strait, making it a closed sea. As we mentioned, since the Black Sea has a unique water circulation system, there’s a low water exchange between the Mediterranean and the Black Sea.

Is the Black Sea dangerous: No. There is nothing dangerous in the Black Sea; there are no sea creatures that will attack or harm you.

Is the Black Sea Safe for Children: Although you can let your children swim in the Black Sea, you should always keep an eye on them. The sea is relatively deep and famous for being harder to swim than the Mediterranean Sea due to wild waves and currents. Nevertheless, as long as you supervise your children and don’t let them swim too far away from the coast, it’s alright to let them enjoy the water.

Can You Swim In The Black Sea

YES!!! And we totally recommend it, see below for some of the best beaches in the Black Sea of Turkey. You can also find more Black Sea beaches here.

Let’s start with the westernmost part of the Black Sea coast. Artvin is home to some of the most scenic locations in Türkiye, and one of them is definitely Kemalpaşa Beach.

The beach is 2 kilometers long and pebbly. Therefore, don’t forget to bring a pair of beach shoes. Plus, since Kemalpaşa Beach has cold water, it would be best to visit the area in winter.

Kemalpaşa Beach is also a popular destination among campers and picnic enthusiasts. The beach attracts many caravans, too, since it’s a totally rejuvenating experience to park your van by the beach, enjoy some barbecue with fellow campers and be alone in the Black Sea’s stunning nature.

If you like beaches where a green forest meets with dark blue waters and pale gold sands, Kemalpaşa Beach is where you should be.

Antik Plaj is a beautiful beach located in the Black Sea region of Turkey. This beach is known for its unique combination of colors, where the green of the lush forests surrounding the beach meets the golden sand and the dark blue of the sea. The beach makes you feel as if you’re on a Mediterranean coast.

The beach features fine, golden sand that stretches along the coast and is perfect for sunbathing and relaxing. You can also enjoy the beautiful scenery of the surrounding forests.

Antik Plaj is a perfect destination for those looking for a quiet and secluded spot to relax and enjoy the beauty of the Black Sea. The beach is not crowded and has a relaxed atmosphere, making it ideal for families, couples, and solo travelers. There are also several cafes and restaurants nearby, where you can enjoy delicious local cuisine and beach facilities like showers, toilets, and sunbeds.

Amastris Beach is in Amasra, a city in Bartın Province. As you can guess, Amasra is the Turkish version of the ancient name Amastris. The area has a history of being a trade port that goes back to the 4th century BCE. And today, Amasra is famous for its beautiful scenery; it might not be one of the biggest trade ports in the world, but it definitely has some of the most majestic beaches in the world.

Amastris has crystal-clear and lukewarm water. The beach offers its visitors the opportunity of watching some of the most stunning sunsets. The beach is sandy, yet there are pebbly areas, so you should bring a pair of beach sandals or shoes. 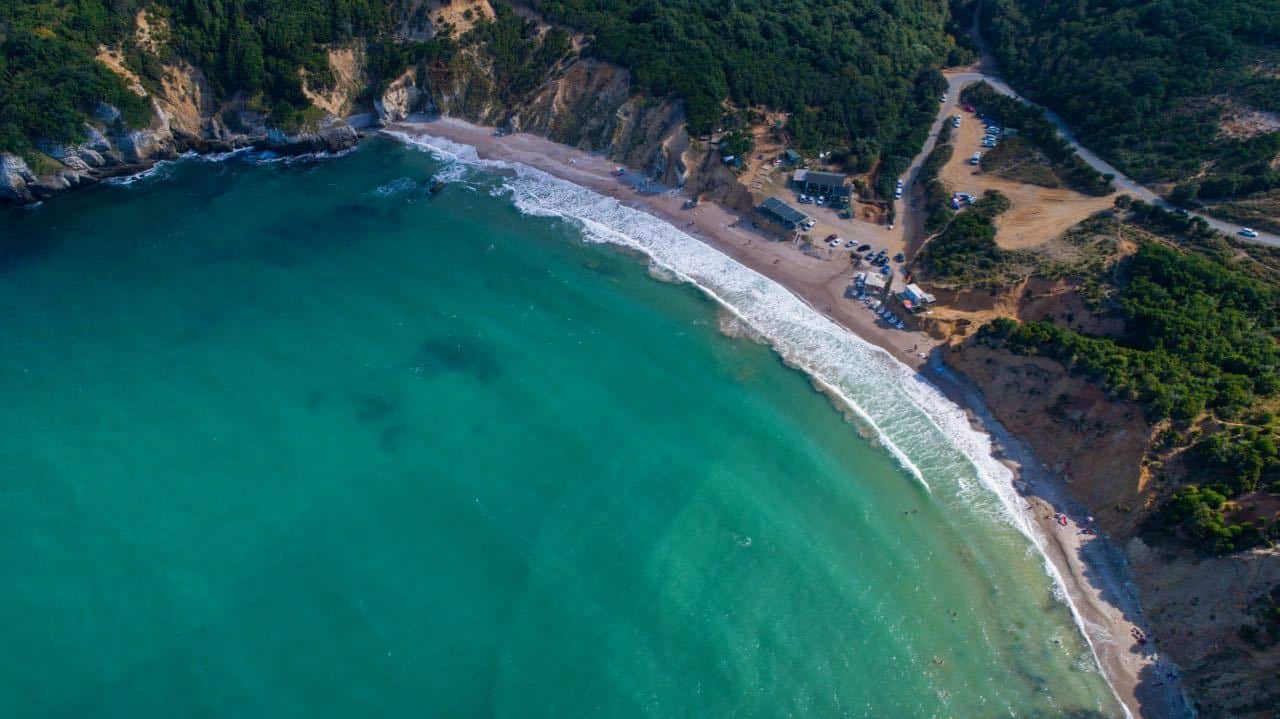 Those traveling to Turkey for a beach holiday tend to crowd into the Mediterranean beaches for the extra sun.  Just an hour from Istanbul, Sile Beach makes a great choice to get your feet wet in the Black Sea. Though it is partly a rocky beach, it also has some sandy sections and a unique coastal landscape that residents of Istanbul seem to prefer.

Inkumu Beach is only accessible by winding road through a forested mountain hill winding down from Bartin Town. It is a three-kilometer stretch of fine-grain beach, which usually gets strong winds and waves in the summer.

Most locals prefer to visit in the months of late August through early October when sea conditions settle down, and the tourists start to fade.

It is not a great swimming beach and can get quite dangerous when the waves are at their peak. Despite the big waves, there isn’t a surfing scene at Inkumu, either. It is better to relax and enjoy the breeze.

Filyos is a beautiful sandy beach on the Black Sea coast of Turkey. One of the most popular beaches in Zonguldak, Filyos, is known for its golden sand and the dark blue of the sea that meets on its shores, creating a stunning contrast of colors. The beach is close to major cities, making it easily accessible for day-trippers and visitors.

The beach is a popular destination for locals and tourists and is known for its long sandy beach that stretches along the coast, perfect for sunbathing and Black Sea swimming. The clear waters of the Black Sea offer ideal swimming and water sports opportunities. The beach is also surrounded by lush green forests, which provide the perfect spot for nature walks, picnics, and also for watching wildlife.

The site is known for its well-preserved ruins and historical sites, making it an outstanding destination for history buffs. The area surrounding Filyos beach is also home to an ancient city, Teion-Billaos, which offers visitors a glimpse into the past. Visitors can explore the ancient city and learn about the area’s rich history and culture.

Kytoros is known for its stunning natural beauty and peaceful atmosphere. Surrounded by dense forests, the beach offers a picturesque view of the coastline. The crystal clear waters of the sea wash the golden sand, and the forested hills make it a perfect spot for those looking to escape the crowd of everyday life and enjoy some peace and tranquillity. Kytoros is a place to be with yourself and enjoy the secluded nature of the Black Sea.

Kytoros beach is an ideal destination for those looking to relax and unwind. The long sandy beach is perfect for sunbathing, swimming, and beach games. The water is crystal clear and perfect for Black Sea swimming and water sports. The beach also provides the ideal spot for watching the sunset.

The area surrounding the beach is also known for its natural beauty and is a popular spot for nature walks and bird-watching. Visitors can also explore the nearby villages and learn about the local culture and traditions. We also recommend you try the delectable dishes of the Black Sea region.