8 Ideas For Biking And Hiking In Eastern Europe

Home > 8 Ideas For Biking And Hiking In Eastern Europe

The Carpathian Mountains – described in Bram Stoker’s Dracula as “one of the wildest and least known portions of Europe” – wind almost 1,000 miles across Eastern Europe. The Accursed Mountains slice through Albania, and the Buda Hills tread softly through Hungary, the Rila Mountains tower over their neighbors in the Balkans.

Eastern Europe may not be home to household names like the Swiss Alps or the Italian Dolomites. Still, this half of the continent nevertheless boasts ancient forests, towering peaks, and picturesque coastlines. These eight hikes and bike rides highlight the scenery that has drawn me back to it time and time again.

Check out:  these water filters for your outdoor adventures. 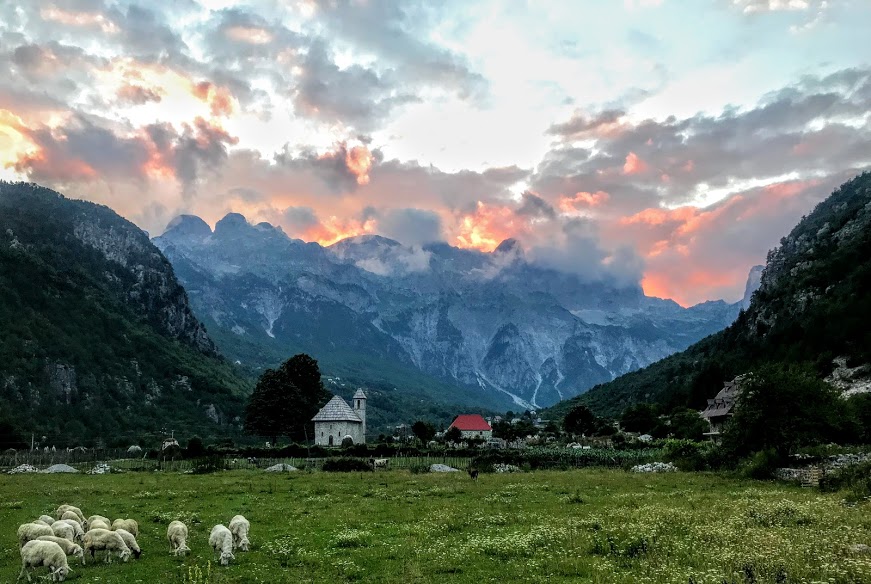 Theth is nestled in the Accursed Mountains in Northern Albania and is only accessible by a single dirt road leading in and out of the park.

In the winter, the town lies almost empty – only the toughest families can weather an entire season cut off from the rest of the country – but in the Albanian summer, it’s a hiker’s paradise.

Farms and guesthouses dot the land, kitchens churn out fresh bread and homecooked meals, and Valbona Mountain tempts hikers to its peak.

The climb covers 12 miles round trip and tops off at 5,889 feet. It’s tough, but the views are spectacular, and the stray dogs happily trotting alongside you will help revive even the most depleted spirit.

Pack a lunch, snacks, sunscreen, and extra layers in case the weather changes. Don’t worry too much about the water – Theth is so remote that the fresh mountain streams remain unpolluted. You can even refill your bottle (have you seen these cool collapsible water bottles yet!?) at them while you climb.

After you descend, enjoy the sunset and some stargazing before gearing up for the hike to the Blue Eye of Theth the next day!

Hikers tip: Conventional backpacker wisdom (or, at least, the scattered blog posts and YouTube videos I could find on the subject) recommends trekking from the town of Valbona to Valbona Peak to the town of Theth, a one-way trip that requires towing heavy backpacks up miles of steep, rocky terrain.

Instead, I advocate the opposite: climb from Theth up to Valbona Peak and then return to Theth again, your bags left safely in your guest house and your back unburdened.

2. The Blue Eye of Theth 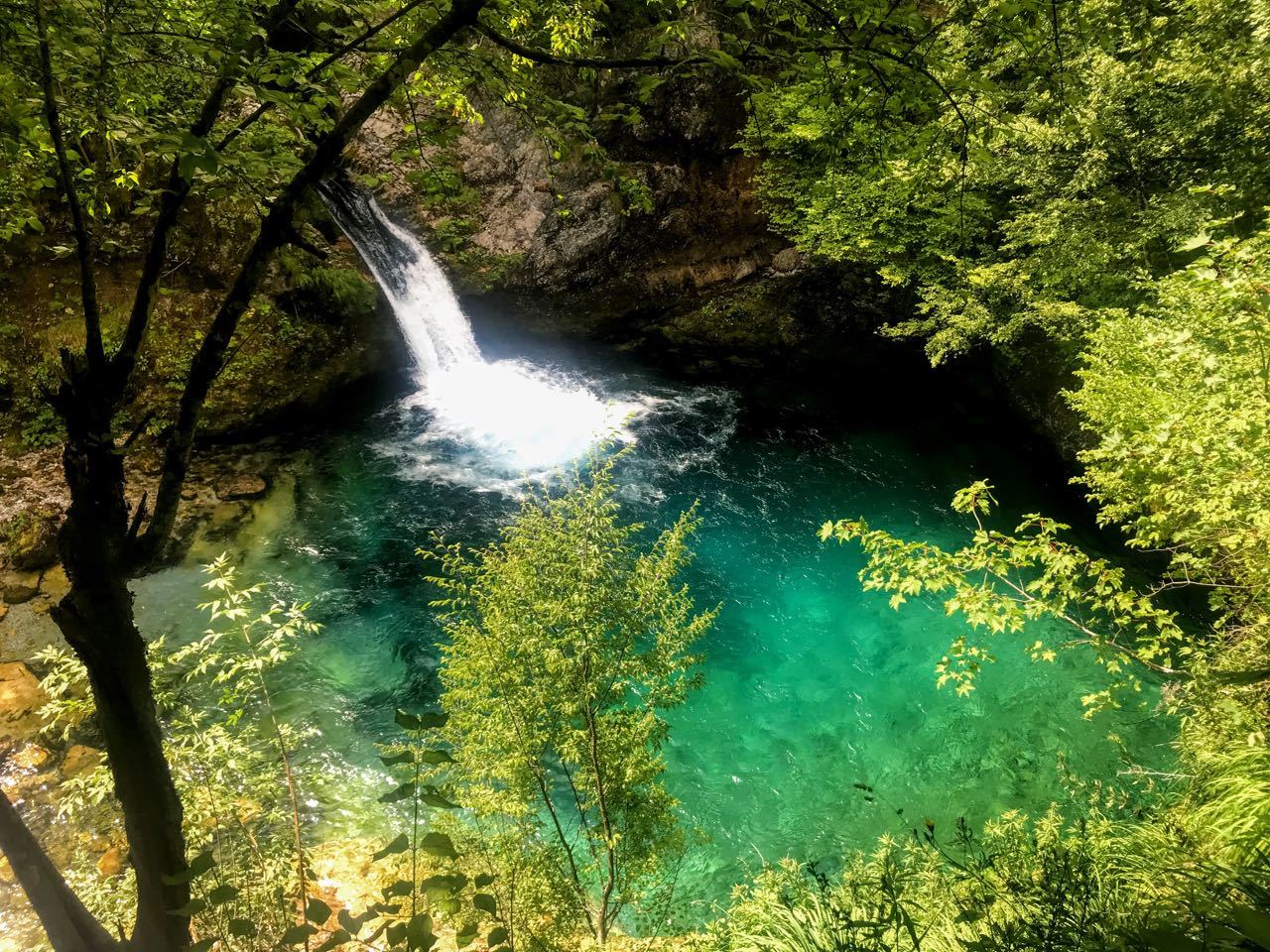 Plan to spend at least two nights in Theth National Park so you can dedicate a day to hiking to the Blue Eye of Theth as well. The trek is 12 miles round trip but much flatter and more moderate than the climb to Valbona Peak. The reward waiting for you at the end is also a bit different, but just as sweet.

The Blue Eye of Theth is a swimming hole and waterfall that dances wildly from blue to green and back again based on the sun’s whims.

Bring a suit and brave the cold water to swim or simply lounge at the nearby cafe where tables are built up into the trees, on ledges, and over the water, scattered so haphazardly it’s hard to tell where the cafe ends, and nature begins. 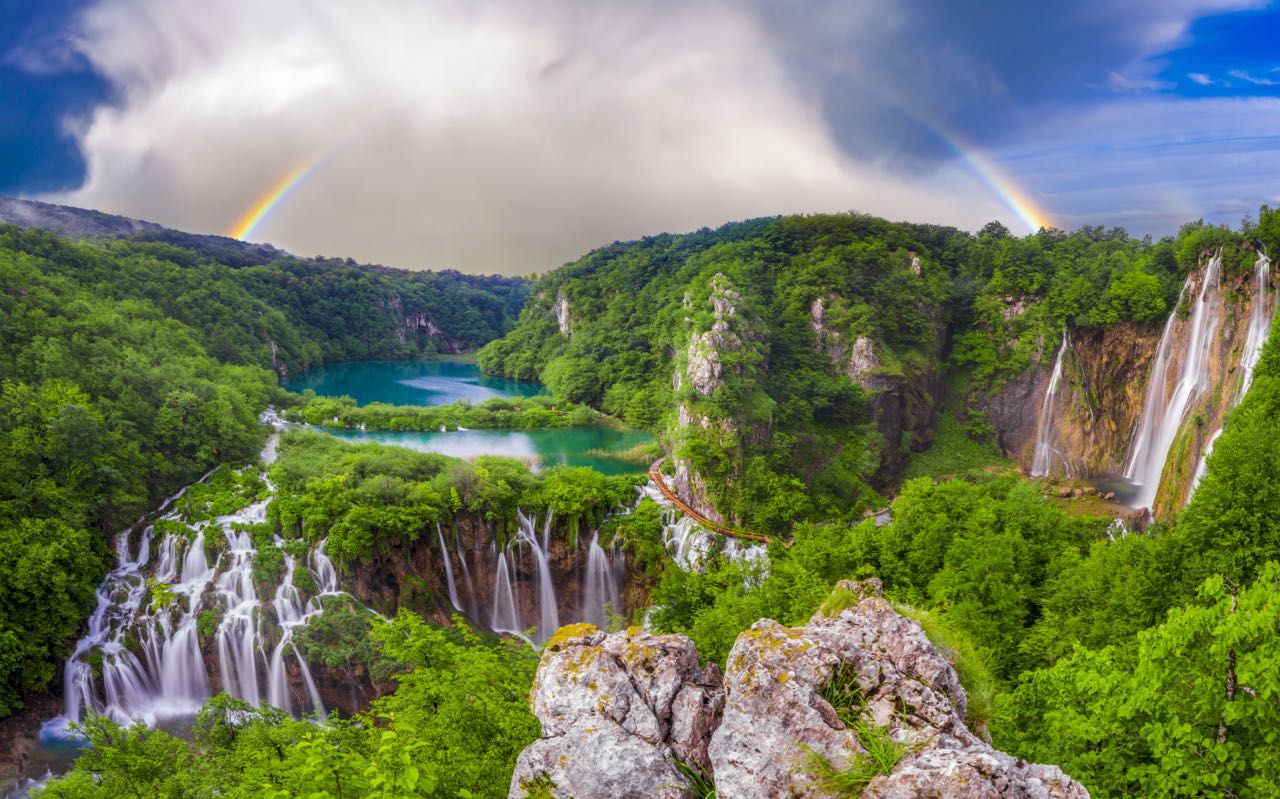 Plitvice Lakes National Park is one of the most popular tourist attractions in Croatia. It was inscribed as a UNESCO World Heritage Site in 1979 and is visited by more than one million people per year.

Because of this, it’s one of the easiest and most structured hikes in Eastern Europe, but also the most expensive. Entrance into the park varies by season but can cost up to $38 per person in the peak summer months.

Still, millions of people think this price is worth paying, and I count myself among them. A journey through Plitvice Lakes National Park will take you above, around, and at times even over 16 lakes interconnected with thundering waterfalls. Whether you opt for the wooden boardwalks that immerse you in the aquatic world or prefer the expansive aerial views from the cliffside trails, Mather Nature’s masterpiece in Northern Croatia will leave you awed.

Plitvice Lakes National Park is about 2 hours from Zagreb’s capital city and 1.5 hours away from the coastal town of Zadar, where, if you still haven’t gotten your fill of Croatian waterfalls, you can visit the nearby Krka National Park to see more. 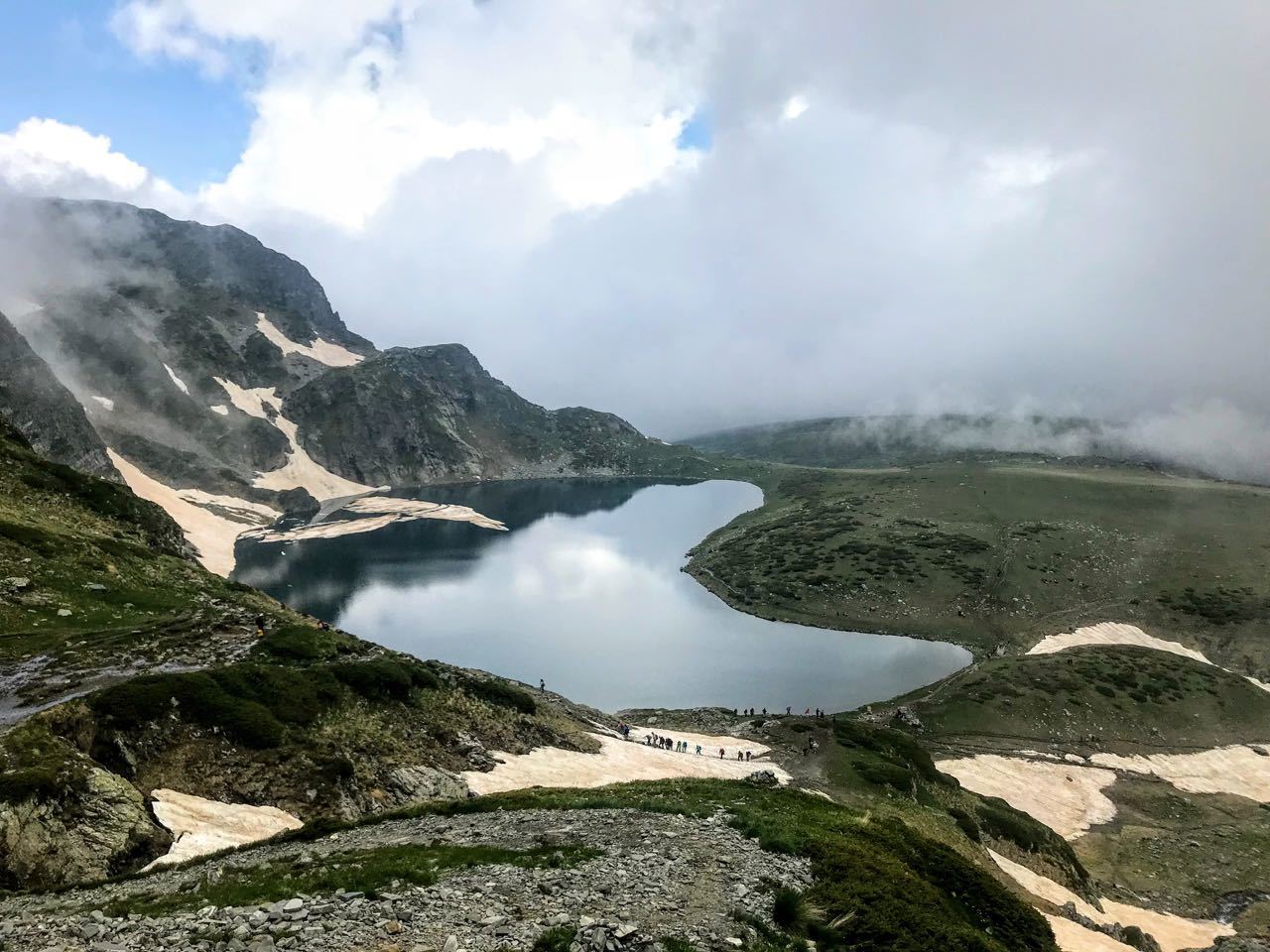 Rila National Park is the largest park in Bulgaria, covering more than 300 square miles, and the Seven Rila Lakes are the highlight. The best way to reach the Pionerska Chairlift that leads to the Rila Lakes trailhead is by car, but guided tours are also available from the capital city.

Then, the trek will take you past seven lakes – the Lower Lake, the Fish Lake, the Trefoil, the Kidney, the Tear, the Eye, and the Twin – on a seven-mile route that culminates at 8,200 ft. with a view of all seven lakes from Otovitsa Ridge. Come prepared with a packed lunch and dress in layers because the weather changes rapidly in the mountains, and temperatures can drop quickly, even in the summer months.

Here Are More Things To Do In Sofia 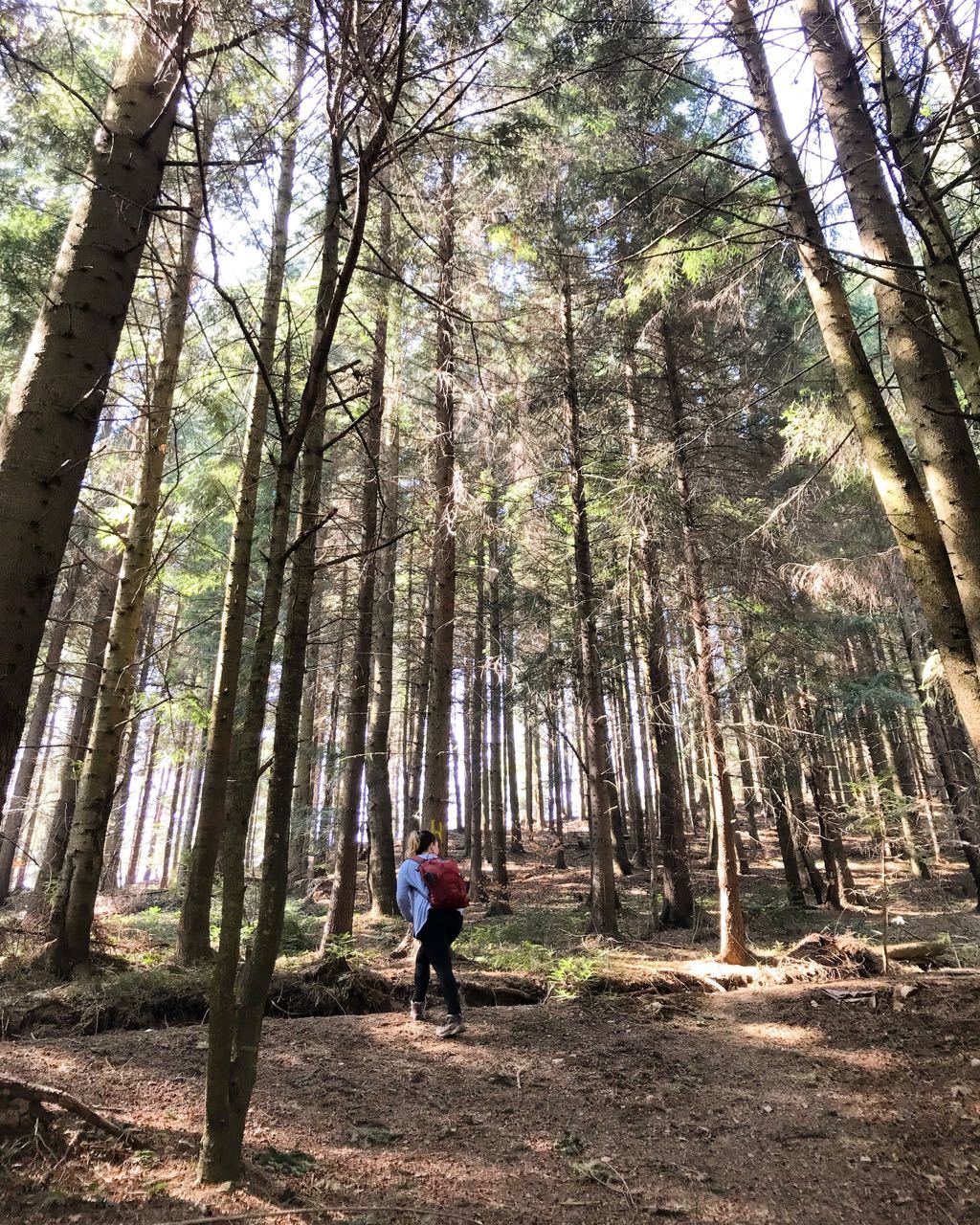 The easternmost Carpathian Mountains run through Western Ukraine and are accessible from Lviv, a growing tourist hotspot. Mount Hoverla, the tallest mountain in Ukraine, is 4.5 hours away from the city, while the ski resort town of Slavsko only requires 2.5 hours of travel.

I opted to climb Mount Parashka in Skolivski Beskydy National Park, a route that begins in Skole’s small town less than two hours by train from Lviv.

We saw a total of five other people on the mountain in late March, which may be because they knew something we didn’t – snow at the upper reaches of the mountain and our subsequent wet shoes forced us to turn around before we reached the peak (oh, the shame). Still, the climb was a pleasant escape from the city nonetheless.

Afterward, a hearty dinner of dumplings and chicken and potato stew awaits in Skole, where you can watch the sunset on the surrounding mountains on the banks of the Opir River before catching the evening train back to Lviv.

Hikers tip: Whichever hike you choose to do in the Carpathians, try to stick around for sunset when the mountains become a palette for the changing light, wiped and recolored a hundred splendid times before darkness finally settles. 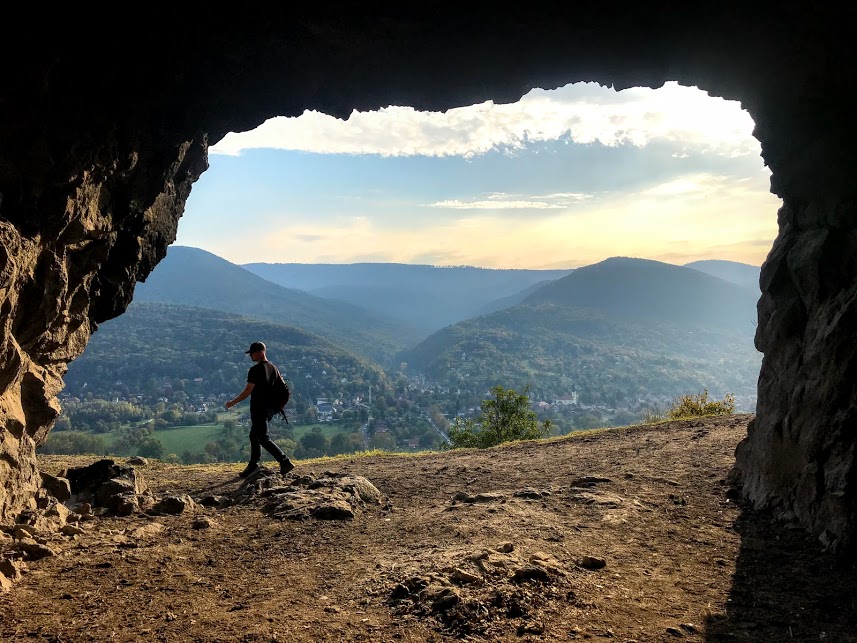 The hike to Remete Cave in Budapest begins with a one-hour train ride to the small town of Zebegeny. From here, the hike is relatively well marked with signs, and we only had to backtrack once due to a missed turn. The trek is also almost continuously uphill, earning it a difficulty rating of moderate.

Despite its name, the Remete Cave hike’s highlight is actually the expansive views of the Danube bend and rolling hills of the Hungarian countryside (although the cave makes for a few unique photos as well).

When you feel all of the goulash, fried lángos, and cinnamon-sweet chimney cakes you ate in Budapest catching up to you, stretch your legs on this 7.5-mile roundtrip hike to recuperate! 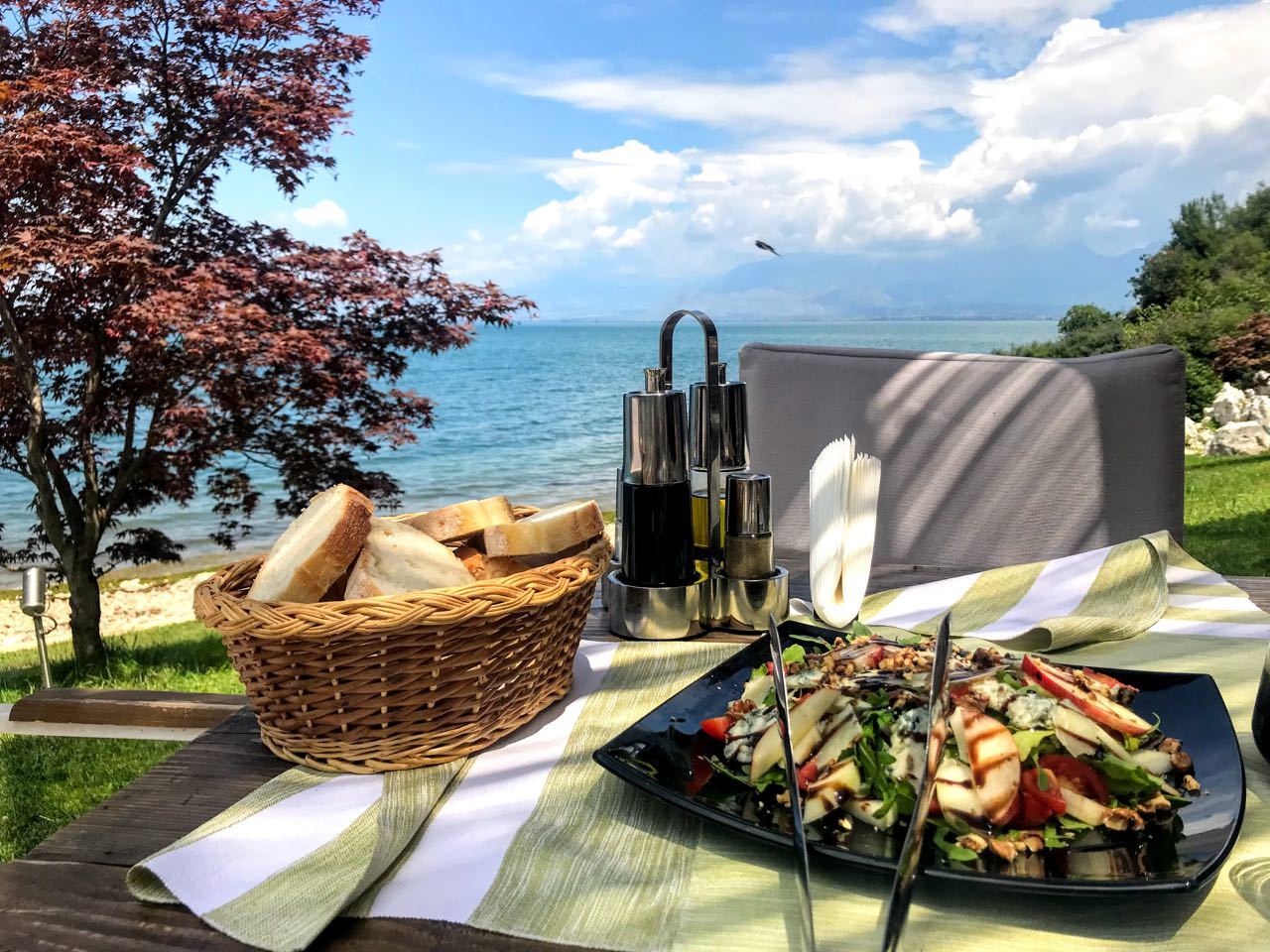 If you want to visit Theth National Park (and if I’m doing my job as a travel writer correctly, you hopefully should by now), you’ll have to catch a jeep or shared van in Shkoder, Albania to get there.

Rather than just passing through, though, stick around for a day or two to enjoy the city’s namesake: Shkoder Lake. The largest lake in Southern Europe straddles the Albania-Montenegro border, with one-third of its 140 square mile surface in Shkoder.

Due to its size, the best way to explore the lake is by bike. Rent one in town or sign up for the daily tours with Kiri Adventures to ride the 13-mile roundtrip from Shkoder to the small town of Zogaj and back, an outing that’ll tick lakeside views, a traditional Albanian lunch (I recommend B7 Zogaj for a relaxing waterfront meal), and your daily workout off your to-do list all at the same time.

Game of Thrones has brought swarms of tourists to the show’s film sites in Dubrovnik and Split, but these aren’t the only must-see spots in Croatia.

The northern city of Zadar provides easy access to one of the country’s still-hidden gems: Ugljan Island. A short 20-minute ferry ride will leave the city behind and drop you into your own private paradise – at least, it will feel that way without the usual crowds that pack the coastline!

The ferry docks in Preko, where a bike rental shop and a grocery store sit side-by-side, conveniently providing all you need for a perfect day. Six-hour bike rentals will only run you about $10 per person, and then, as they say, the world island is your oyster.

I recommend riding across the island from Preko to the Samostan SV. Jeronima Monastery in the town of Ugljan. The monastery is built on the water with stone docks and a picturesque beach, making it the perfect place to swim in the clear blue ocean and idle away the hours with a bottle of wine before biking back to Preko and back to reality.

Biking tip: Roundtrip ferry tickets from Zadar to Preko have an open return, so snap a picture of the ferry schedule before exploring Ugljan Island because you’re free to return to Zadar at any time you please.

Let us know below which of these hikes or bikes you’ll try first!