Wherever you go in the world, it’s a common theme that we all love a good view. What better view could you expect to get of Dubrovnik than from the top of a mountain?

One of the most popular tourist attractions in Dubrovnik is, without a doubt, the cable car ride to the top of Mount Srd. If you want to walk, you can; if you’re going to drive, you can (see below for more on that), but nothing beats the cable car ride in Dubrovnik, and the other bonus is that you don’t have to walk in the intense summer heat! And if you happen to visit Dubrovnik off-season, you’re in luck, as the cable car runs year-round!

Dubrovnik is a beautiful destination, but seeing it from up above will show you the grand size and scale, as well as seeing a little further afield too. On a clear day, you can see up to 60 km away – that’s as far as the beautiful Elafiti Islands!

Let’s explore the cable car ride in a little more detail. We’re sure it will convince you to snag one of the great Dubrovnik hotels and make this city a must on your Croatia itinerary!

What Is The Dubrovnik Cable Car And Mount Srd?

Mount Srd sits proudly over Dubrovnik and rises to an enormous 415 m above sea level.

We just mentioned that you could see as far as the neighboring islands on a clear day, but the view you will get over the local coastline is something you should be snapping away at on your camera!

We’re going to talk a bit about what you can do at the top of the mountain in a short while, but let’s give you a little history for now.  At the top of the summit, you will find a fortress, which was built way back in 1806 by Napoleon Bonaparte.

This was named the Imperial Fortress, and it was designed to overlook the coastline and protect & warn again invaders who might be trying their luck. The fortress has been well protected and conserved since those days, and you can head there and venture around its walls when you get to the top of the cable car ride.

The Mount Srd cable car in Dubrovnik was built as a tourist attraction in 1969, but it was renovated and restored after the 1991 attack on the city. It now has two cabins working throughout the day, and they hold 30 passengers at a time. Naturally, during the summer months, in particular, this can mean queues, but get there early enough, and you should be able to cut down your wait a little.

The journey takes around 4 minutes – much less than walking! As you make the incline to the top, you’ll notice the houses and buildings getting smaller and smaller and the view stretching further and further.

It’s all a little breathtaking.

If you’re worried about the adverse weather, there’s really no need. The cable car detects when the wind might be picking up, and it stops until the wind levels reduce. This means safety is always put first. Similarly, if there is a lightning storm, the Dubrovnik cable car doesn’t run until the storm has passed. You’re perfectly safe! 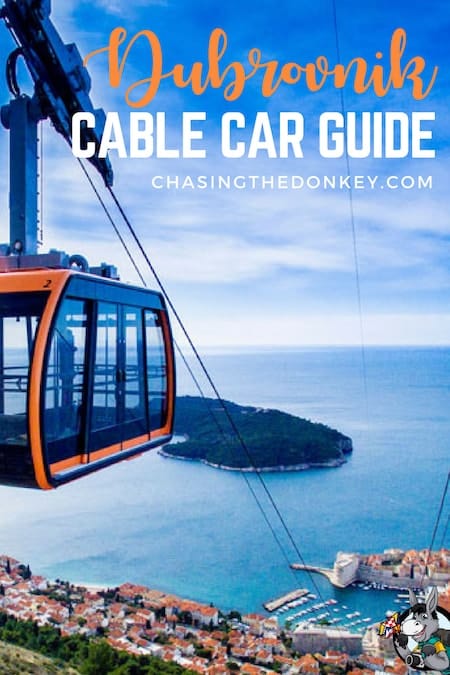 How To Get To Dubrovnik Cable Car 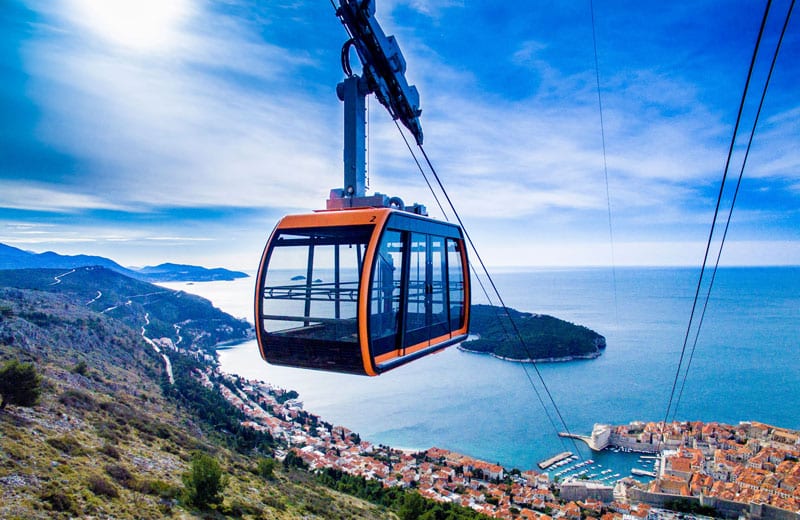 Getting to the cable car station in Dubrovnik is very easy from the Old Town, where it is clearly signposted and just a couple of minutes on foot. Alternatively, you can head to Pile Gate or Ploce Gate and talk for just over 10 minutes, taking you on a scenic route around the city walls. You’ll then walk down the steps and see the cable car station.

If you venture towards Buza Gate, you can walk up the steps from Stradun, and you’ll see the cable car signs from there. However, the steps are a little steep, so if you’re not great on your feet, do bear this in mind.

So, as you can see, the Dubrovnik cable car location is super-easy to find and get to. It’s just behind the northern, inland section of the City Walls.

Kids are very welcome on the cable car! I promise that they’ll love it. My little guy (4 at the time) did not want to get off. It is one of the most fun things to do for kids in Croatia.

The current Dubrovnik cable car cost is the following, depending on age and type of trip:

Payment for Dubrovnik Cable Car tickets can be made by Kuna or credit card only. No foreign currencies are accepted at the cable car station, so change your money before you get there to make life easier.

What Is The Cable Car Schedule?

The Dubrovnik cable car opening times are different depending on the month of the year, so check before you venture there.

Also, remember that during particularly adverse weather (only really likely during the winter months), the cable car may be out of action for a short period of time during the day until it is safe to continue operating. 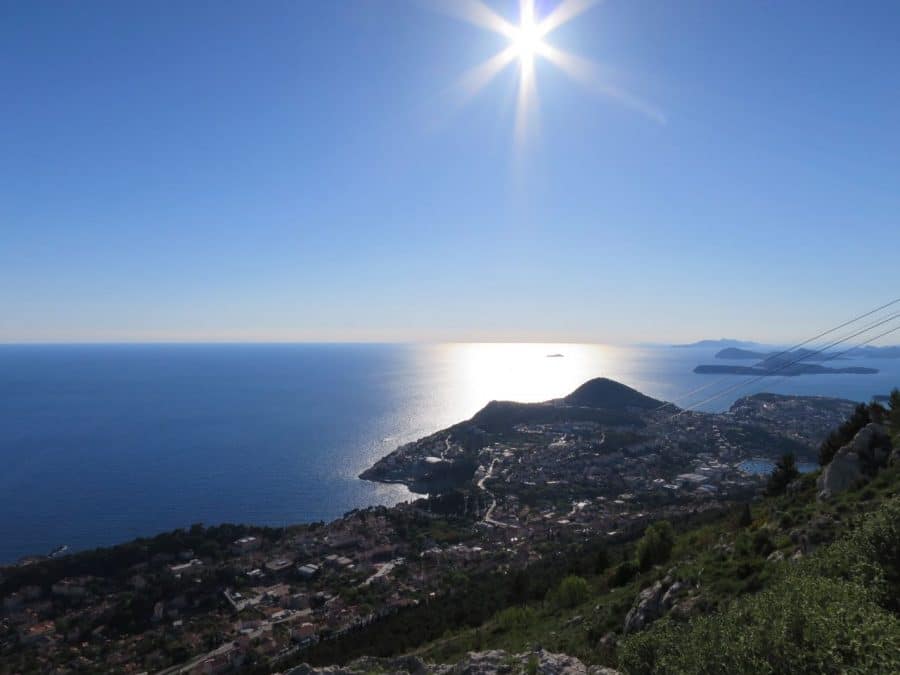 Once you’ve enjoyed the ride by cable car up Mount Srd in Dubrovnik, what is there to do when you arrive? Plenty!

The most common activity and the one you will see instantly is the stunning view! Snap away on your phone and get some fantastic photos to remember your time by.

If you find your charge is running a little low, you’ll find something you might not expect – solar-powered charging benches! Yes, really! These are called Steora, and there are two of these at the top of the cable car summit station. The benches are powered by the sun, and they’re not only for sitting on, but they’re also for charging up your devices simultaneously.

Here’s a quick tip for taking photos of the view. Many people focus only on the sea in front of them and the coastline, but turn around – the mountains near Dubrovnik are astonishing on a clear day.

Aside from views and technology, the Panorama Restaurant Dubrovnik is well worth a try, if only for a delicious coffee and a soft drink in the sun overlooking Dubrovnik below.

At Panorama Restaurant & Bar Dubrovnik, you’ll find some delicious authentic Croatian dishes here, as well as more international choices too. The cable car station has a large gift shop if you want to take some souvenirs back home with you.

If you want a few minutes away from the station, you’ll find the aforementioned Fort Imperial Dubrovnik, also known as the Imperial Fortress. If you love history, this is a must-do for you, and it also houses a museum dedicated to the Homeland War in Dubrovnik. This War Museum in Dubrovnik is among the city’s greatest museums and well worth visiting. While the fort is still in good condition, it does show some signs of wear and tear. Despite that, you’ll be able to get a real feel of the past.

Additionally, active visitors might want to go for a hike on the Fort Imperial Trail. This scenic Mount Srd hike starts at Fort Imperial and for 1,300 meters to Fort Strincjera. It’s a paved path that runs through woodland and farmland, occasionally offering fantastic views of the Old Town, the Lapad Peninsula, the Elaphiti Islands, and the shimmering Adriatic Sea.

This Dubrovnik Srd Hill hiking trail makes for a fantastic activity high above the bustling crowds in the Old Town.

Driving To The Top Of Mt. Srd

Lots of people ask me about driving instead of paying the cable car ride price. Yes, it is expensive, especially when you have a whole family to buy for. Plus, of course, there are always long lines in peak periods.

You can, of course, drive to the top of Mount Srd. But, I would say DO NOT! Driving to the top of Mt. Srd is a scary affair. It is a one-lane road with traffic going both directions, and in my opinion, it is risky – especially in a hire car with that heck-of-a excess fee if you damage it. Take the Dubrovnik Mount Srd cable car instead! This is, after all, one of the city’s top attractions.