Here Is How To Beat The Crowds in Dubrovnik

Home > Here Is How To Beat The Crowds in Dubrovnik

Here Is How To Beat The Crowds in Dubrovnik

You are guaranteed a good time in Dubrovnik. It is packed with amazing sights, history, beautiful scenery, delicious food, fantastic nightlife, and plentiful shopping opportunities.

Dubrovnik has become so darn popular, but when a destination becomes as popular as Dubrovnik has, there are always downsides to the upsides. The downside to all of this popularity in Dubrovnik is that the crowds are now (almost wholly) unavoidable.

Dubrovnik has been popular for many years, but a real drive towards more tourism in the area and its deals with cruise liners has been very successful. That’s great for local businesses because it means more money coming into the local community (unless we are talking about day-trippers from the cruise liners – those cruisers hardly spend anything, according to all reports).

On top of that, you have the massive success of the Game of Thrones TV series, which was a filming location for the show. Fans flock to Dubrovnik to check out the various places they are familiar with from the TV, but along the way, they fall in love with the city for what it is in the here and now. They go home, and they come back, they tell friends and family to visit, and the cycle repeats. And. That’s just one reason why Dubrovnik has become so popular!

The Dubrovnik city walls are one of the most popular tourist attractions in Europe, dating back to the 16th century; coupled with the fact that Dubrovnik has impressive beaches and has fantastic weather, it makes it an uber-popular travel destination – but also a really crowded one.

Let me tell you, Dubrovnik is pretty darn impressive.

Crowds flock to all the marvelous places in Dubrovnik, and without a doubt, one of the busiest places in the city is the UNESCO-Listed stone ramparts. A few years ago, you could wander around Dubrovnik without many people getting in your way, but you’ll find people everywhere these days.

Crowds in Dubrovnik are unavoidable, but there are some ways you can visit Dubrovnik overall without having to elbow people out of your way!

Mato Franković, Dubrovnik’s mayor, took UNESCO’s warnings in 2017 (and again in 2018) about stripping the town of its much-prized UNESCO listing seriously. He announced ways he planned to monitor and track the large crowds.

For example, a few years ago, people-counting cameras were installed at the town’s entrances to reduce the crowds in Dubrovnik at Pile gate and other key sites. A plan was set to limit the number of visitors allowed in Old Town to just 4,000 people at a time. 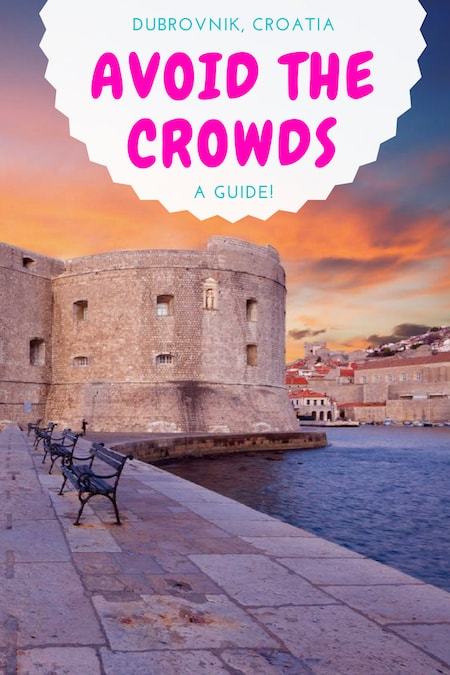 So, When Is The Best Time To Visit Dubrovnik?

Do not visit during June, July, and August if you’re trying to avoid crowds. No joke. Really skip it. If you’re planning to come to Dubrovnik in the summer and dislike crowds, you’re going to become very frustrated indeed!

Peak season is when the Old Town is at its hottest – old stone walls, and paths reflecting the summer sun, added with the crowds, make for a terrible combination if you ask me. I had not been to Dubrovnik in the summer since 2008 and only went in 2020 to take advantage of the lack of crowds due to covid-19. It was bliss, but I know it’s not usually like that.

Wintertime is the most ideal time to wonder about Dubrovnik, as the crowds are at their lowest, and the locals are claiming back their city and enjoying the Christmas markets. Winter in Dubrovnik is very pleasant temperature-wise, and although it can rain a little from time to time, you’ll get plenty of clear and dry days. Just be sure to pack a coat.

In early February, the Day of St Blaise Day is celebrated – this is the day (well, actually several days) when Dubrovnik’s patron saint is celebrated, and the town comes alive.

The shoulder months of April, May, September, and October before and after the peak season are also grand. There are mild temperatures, plentiful sun, and far less in the way of crowds. You’ll even find a few days in there that are good for swimming and beach days.

Tips For Avoiding The Dubrovnik Crowds

You already know why so many people want to visit Dubrovnik (and why you should want to go too), and now you know when is the best time of year to go to Dubrovnik. Now, let us help you avoid those maddening, crushing (literally) crowds in Dubrovnik.

You really want to try to take some of this advice as Dubrovnik’s wall circumference is 2km and is only 140000 square meters or 34 acres – that is not a lot of space for ten thousand tourists.

Pick The Time Of Your Visit to Dubrovnik Carefully

Really, I can’t say it enough. So, I will repeat it: do not come in peak season. Come in the off-season. Simple.

Also, it can help to come mid-week. On the weekend, you’ll naturally get more people in Dubrovnik – as the domestic tourists need a break too! If you can avoid the weekend warriors, you’ll have a (little) extra room to yourself.

Dubrovnik is a very popular cruise destination; cruise ships have many people on them. And all those people have just one day to experience the Old Town of Dubrovnik – so they all land in the city at one time! Some days last year, there are an extra 10,000 bodies, all trying to see the same Dubrovnik attractions as you.

Many claim that cruise ships are destroying Dubrovnik (and I agree), but there is a way to avoid cruisers even during peak season (see below). Still, another way to prevent the cruise crowd is to plan your trip in September and October, as that is when the big cruise ships are heading over to the Caribbean. The majority of European cruises are coming to an end around this time as people chase the sun.

There are also certain days when more day-trippers from the big cruisers will head into Dubrovnik compared to others. But how can you know? What if I told you that you could find out when these days are – meaning your time in Old Town Dubrovnik will be less crowded? You’d want to know, right?

There is a way.

Use the color-coded guide here to check the cruise schedules. Look for days when no ships arrive, or look for the green days, as they have less than 3500 day-trippers coming into town.

On the other days, not only will you frequently see more people wandering around, but you’ll also see large tour groups touring the main sights, including those stone walls we were talking about. You’ll notice that Thursdays tend to be quite busy.

If you can’t avoid the main cruise ship days, there are a few other ideas for beating the Dubrovnik crowds. Like, how about spending some time in the morning and early afternoon at your hotel or villa pool or spa, and then heading out in the late afternoon when the cruise ships have sailed away, and most people are heading back to their hotel to get ready for the evening’s festivities?

If you are a big Game of Thrones fan, then, of course, you’re going to want to head to Pile Gate, as this was where the TV show was filmed in abundance, but this is also one of the busiest spots; because of that fact! In addition to this, Pile Gate tends to be a meeting point for large tour groups too. Arrgh, it is madness there. Really do you want to see a gate? Nah, skip it to use another entry point instead.

Choose another gate to enter the walls and start your walk, and again, try and go a little later in the day if you can, when you will manage to avoid those early starters! Buza Gate and Ploce Gate are two equally scenic starting points, and the map above will help you find them and plan your trip.

Walk Around In The Evenings Or Early Morning

During the summer heat, walking around during the middle of the day can be a tiring experience; all those stones reflect the heat making it feel like you are in a human BBQ.

Instead, wait until you have eaten and then venture out in the evening. Many of the major markets and stores are still open until late at this time of year, and you’ll also benefit from less in the way of heat. It’s a great way to walk off your dinner from the city’s fab restaurant scene too!

Or get up early. Enjoy breakfast early (okay, you may see a few locals about) and then head off on a private tour for the day outside of the walls (see below for day trip ideas from Dubrovnik)

Book A Hotel Outside Of The City Walls

You’re going to need to walk a little further, and yes, it will include a few steps, but if you want peace and quiet, it’s best to find a hotel that isn’t within the city walls themselves.

This will give you a quieter base, and you won’t have to deal with large groups of people from the moment you open your eyes! Another benefit is that the price is likely to be cheaper too.

We tend to stay in Lapad – there are frequent buses to and from the Old Town, it is gorgeous, and Lapad also has excellent bars and restaurants – many of which are much cheaper than the Old Town.

You could choose to stay even further afield, like in Cavtat or charming Orebic. Orebić is a romantic little town, and if you visit in the off-peak, you’ll have the place to yourself. You’ll find it tucked away on the Pelješac Peninsula of Croatia, about 2 hours away from King’s Landing.

Another great option to escape the crowds and save some money is to camp in and near Dubrovnik.

Sometimes to have a great time in Dubrovnik, you have to leave. Just for a few hours.

We all just want a little peace and quiet, and in that case, where can you go in Dubrovnik to totally avoid the crowds and chill the hell out? Here are a few ideas:

The crowds of Dubrovnik should not put you off seeing this magnificent ancient city.  This is a truly remarkable city; all you need to do is follow this advice to avoid the crowds and, thus, have a marvelous time in Dubrovnik.

Have you got another tip to beat the crowds in Dubrovnik? Let us know below.