Top 10 Things To Do In Prizren, Kosovo

Home > Top 10 Things To Do In Prizren, Kosovo

Top 10 Things To Do In Prizren, Kosovo

One of Kosovo’s popular destinations, Prizren, is known as “Museum City” or the “prettiest city in Kosovo.” Set on the slopes of the Sar aka Sharr mountains in Kosovo and by the banks of the Prizren Bistrica (Lumbardhi River), this stunning city is the hotspot of Kosovo tourism and a definite must on any Kosovo travel itinerary.

With fantastic food, cultural events, and being surrounded by beautiful nature, there are many top things to see in Prizren. But if you’re looking for fun things to do in Prizren, Kosovo, here are our top choices in just a few days or perhaps a week.

What To See And Do In Prizren?

Although there are more, we’ve selected the top 10 things to see in Prizren:

Take In The Spectacular Views From The Prizren Fortress 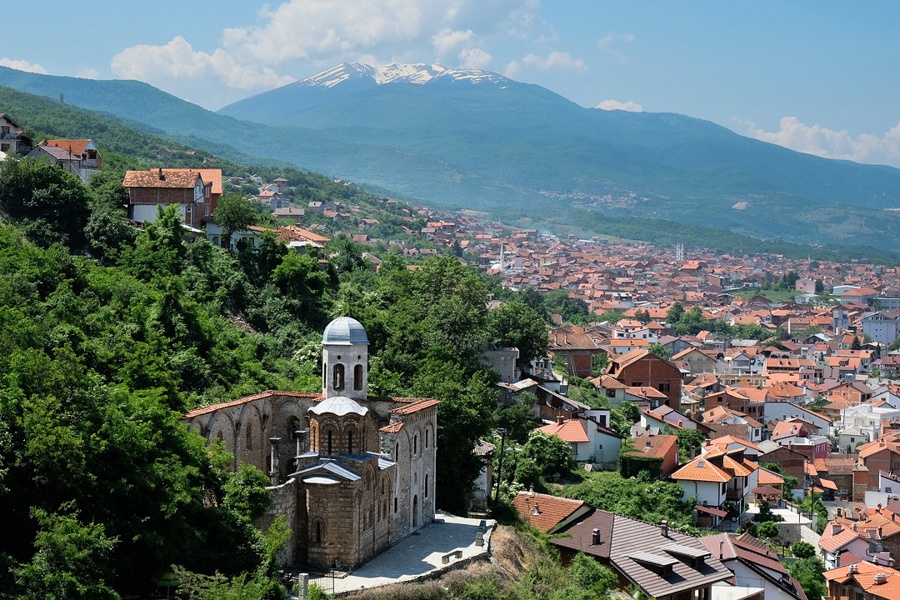 Built in the 11th century, the impressive Prizren Fortress provides the city’s best view and the surrounding valley. Dusan’s Fortress, or Kaljaja Fortress, was also built on a hill overlooking Bistrica Prizren but was destroyed in 1915 during World War 1.

The 15-minute walk up to the fortress’s ruins goes past the Orthodox Church of St. Savior’s ruins. You cannot miss a visit to this Prizren top attraction – grab your camera to take a picture of the city with the canon in the forefront.

If you’re a nature lover looking for places to visit around Prizren, full of beautiful parks and natural landscape and sky-tipped mountains, the Sharr Mountains National Park is one of the best places to visit in Prizren.

The Sharr Mountains or Sar Mountains in South Eastern Kosovo will take your breath away, full of stunning alpine peaks and lush nature. If you have more time, book a local hiking trip with a tour guide that will take you all the way from Brod Village to the Black Peak and Gornje Lubinje that ends in Prizren.

Built by Sofi Sinan Pasha in 1615, the Sinan Pasha Mosque has an impressive dome and facade and a striking minaret. Built with stones taken from the nearby Serbian Orthodox Saint Archangels Monastery that was abandoned and had was in ruins by the 17th century.

Visible from most places in the city, the mosque has a striking interior that can be seen when prayer services are not on. The original stone flooring and carpentry work can still be seen at these well-known landmarks in Prizren. The walls of this Prizren tourist site are covered with quotes from the Quran and beautiful floral patterns. If you can only add one mosque to your list of things to do in Prizren, Kosovo, this Prizren sightseeing attraction is a must.

One of the best places to see in Prizren, the Old Stone Bridge, or ura e Gurit, crosses the Prizrenska Bistrica or Lumbardhi River in the town center. Joining the Shatervan square and the Sarachane square on different riversides, it is one of Kosovo’s best sites and one of the main Prizren landmarks. Built with stones in the latter half of the 15th century, and currently, among the top Prizren points of interest, the bridge is paved with cobblestone and has three arches.

It was destroyed in the flooding of November 1979 but restored in June 1982. A popular tourist thing to do in Prizren, Kosovo, is to take pictures on this Old Stone Bridge – be sure to wake up early and get your tourist-free shot.

Built by the Runoviq brothers between 1856 and 1887, the Serbian Orthodox Cathedral Church of St. George was built near the Old Church of Saint George. The Cathedral was set on fire in 2004 and slowly restored over the next few years.

The simple minimalist inner walls contrast with the sturdy exterior stone walls.  Because permission from the priest is required to go inside, you’ll have to admire this top 10 site in Prizren from the outside.

Bogorodica Ljeviska Cathedral or Our Lady of Ljevis is one of the top things to see Prizren even if you cannot enter inside. This church is a must-see in Prizren and was declared a Monument of Culture of Exceptional Importance by Serbia in 1990. It’s also on the UNESCO’s List of World Heritage in Danger as part of the Medieval Monuments in Kosovo.

Built in 1306 by Serbian King Stefan Milutin, the church was used as a mosque by the Ottoman Empire and converted back to a church in 1911. Bogorodica Ljeviska was built on the ruins of an older Byzantine Church called Metera Eleousa. Although it is one of Kosovo’s top 10 tourist attractions, the church is closed to visitors as the beautiful frescoes are still being renovated. We’ll let you know when it’s open again – until then, do not let that stop you from taking the 10-minute walk here from the city center to gaze at the magnificent architecture of Milutin’s 5-dome cross-shaped church.

Turkish Bath Aka The Hamam Of Gazi Mehmet Pasha

Close to the Emin Pasha Mosque on Adem Jashari Street, the Gazi Mehmet Pasha Hamamis is one of the places to see in Prizren, everyone we know raves about. Built between 1563 and 1574 by Gazi Mehmet Pasha, it’s one of the Balkans’ biggest and one of the top Kosovo tourist attractions. With three-foot thick walls and separate male and female sections, this attraction may really be a spot that showcases the difference between the past and the present day. Since 2000, it has been used as a zone for different cultural, artistic, and educational events.

Crkva Sveta Nedelje, or the Church of the Holy Saviour, is a Serbian Orthodox Church built in 1330. This church was heavily damaged in the 2004 war, but it has since been rebuilt and can be visited and always makes the top Prizren lists.

Walk Through The Old Town

There are many things to do in Prizren that involve walking (get good shoes!), like walking through the Old Town. Gazing at the Old Ottoman architecture, before deciding on what small stores you’ll take a gander at, which traditional local handicrafts you’ll take home – and then finally where to enjoy the local foodie delights.

Travel To The Mirusha Falls

To reach one of the ten best places to visit in Kosovo, you’ll need to head a little over 62 km out of town to the Mirusha falls. The Mirusha Falls are actually more than one waterfall, a chain, so to say, which have created canyons along the riverbed, some of which have formed stunning rivers.

The tallest waterfall is the one between the 6th and 7th lakes, with a superb view. If you’re visiting Prizren with kids in the summer months, the lakes here are just perfect for swimming with the family!

View The Ottoman Architecture At The Emin Pasha Mosque

Situated close to the Gazi Mehmed Pasha Hamam on Bajrakli Street, the Bajrakli Mosque is undoubtedly one of the best things to see in Prizren. It is also named the Emin Pasha Mosque or Gazi Mehmet Pasha Mosque after its benefactor, Emin Pasha; it is one of the famous places in Kosovo.

Built in 1831 and smaller than the Sinan Pasah Mosque, it follows a similar construction, is rectangular, and has intricate wood carvings reflective of Ottoman architecture. Baroque paintings from the 19th century and blue and yellow floral motifs cover the internal walls. Many old marble tombstones can be seen in the yard, including that of Emin Pasha.

Other Things To Do In Prizren 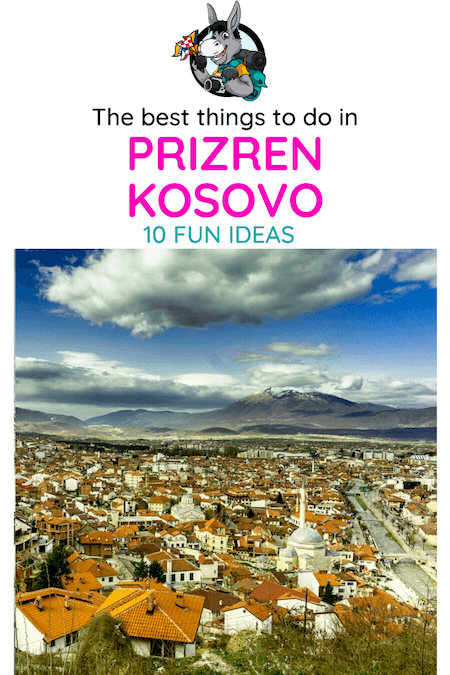 Foodie Fun Things To Do In Prizren

If you’re wondering what to do in Prizren at night? Or, for that matter, the top tourist attractions in Kosovo for foodies, we’ve got you covered. Prizren has many restaurants around town and many in the Shadervan area serving pizzas, grilled food, and local desserts. Here’s what to do in Prizren to feed your tummy:

Eat at Te Syla or Alhambra

Located in Sejdi Begu in Shadervan, the Te Syla is a riverside restaurant started by a street food vendor named Sylejman Dapko in 1967. The simple décor and superb location complement the exquisite dishes served here. If you visit, try the fantastic Balkan Grill, kebabs, grilled pastries, and other dishes. The official name of the restaurant though it is Alhambra.

At Vatrat Shqiptare in Prizren is the famous Marashi Restaurant. A favorite with tourists, the restaurant is right next to the river and has a modern ambiance and an outdoor terrace. All the food here is heavenly and cheap, from the soups and starters to the raki and the main course.

Located just 10 meters from Shadervan, this Kafe serves the best coffee in Prizren. If you prefer alcohol, the Kafe serves the Peja and Sabaja craft beers from Prishtina, as well as the best rakia in town. Set right on the street, it’s an excellent place to watch the world go by.

The colorful plates at Besimi Beska are so pretty; they’ll leave you not wanting to touch your food. The portions are generous, and the food is delicious. Try the mixed grill, the goulash, steaks, and local bread with cheese. The bread, naans, and pizzas here are made in traditional brick ovens. The restaurant is located in Shadervanit 56 in Old Town and has a small pond and trees in it.

Where To Stay In Prizren

Prizren has many good hotel choices near the Old Town or within walking distance of the major attractions. Here are our favorite places to stay in Prizren.

If there are other ideas for things to do in Prizren that you’d like us to add to this post, let us know below, and we’ll gladly add them in.