5 Reasons Why You Should Visit Gallipoli In Turkey

Home > 5 Reasons Why You Should Visit Gallipoli In Turkey

5 Reasons Why You Should Visit Gallipoli In Turkey

Written by Julie from The Red Headed Traveler.

For most visitors to Turkey, especially those traveling there for the first time, visiting a World War I battlefield like Gallipoli is generally not on their itinerary. There’s the requisite time spent in frenetic, brimming with history Istanbul…and from there, perhaps a sojourn to the famed Turquoise Coast where days are spent idling away the hours in this Mediterranean paradise complete with the most picture-perfect meze platter for you (and especially your stomach) to partake in.

And we can’t, of course, forget about Cappadocia, the central Turkish region which is home to a mythical landscape, a bucket list item for many finally fulfilled when gliding over its breathtaking beauty at sunrise in a hot air balloon or sleeping in a cave hotel.

But what about Gallipoli? It’s located on a peninsula in Turkey right between the Aegean Sea and the Dardanelles straits. The Allied commanders thought an invasion there would be a decisive strike against the Ottoman Empire (which had aligned itself with Germany) and thus would bring a quick end to World War I.

In case you were asleep that day in class when the Gallipoli campaign was covered, or worse, as an American, you never even heard the name Gallipoli before since World War I history is so hastily and scantily clad in the school curriculum, here are five reasons why you should visit this sacred site. 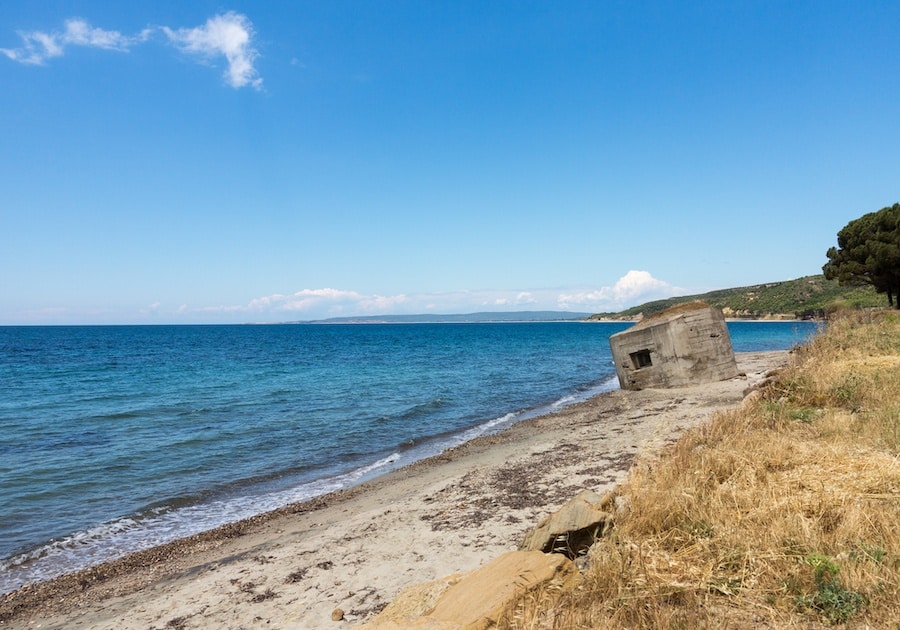 There’s no better way to learn about the past than being in the same exact spot where it all happened, for it’s only then that history can indeed come alive. When standing in the tiny city of Ecebat (where most visitors begin their tour to the Gallipoli travel sites) and gazing out at the waters of the Dardanelles, think about how both the Allied and Central Powers were fighting for control over a body of water only 0.75-4 miles (1.2 to 6.5 kilometers) wide.

When you arrive at ANZAC Cove, the site of the landing of the ANZAC forces (Australian New Zealand Army Corps), and gaze at the steep, rocky terrain before you, the same landscape the ANZACs would have had to scale while avoiding artillery fire and another bombardment from the Turkish forces; you’ll be amazed to learn that there were relatively few deaths during the landing itself, that it wasn’t a bloodbath like the D-Day Invasion was at the Normandy beaches in France in 1944.

Sadly, the bloodbath would commence in the months ahead during the many ferocious battles fought during the campaign.

Unlike in Belgium and France, where the infamous trenches along the Western Front were plowed over after the war, they remain mostly intact at Gallipoli. As you stand in one (because yes, you are allowed to climb down into them), let this bone-chilling fact sink in sometimes, the Turkish and Allied lines were just a few dozen meters apart…each side was that horrifyingly close to the enemy. A stark contrast to the fighting on the Western Front, where soldiers from the two opposing armies rarely saw each other.

Pay Your Respects To The Fallen Soldiers

At a place where so much death occurred (by the time the Allied forces withdrew in defeat in January 1916, nearly a year after the fighting started), nearly half a million soldiers had been killed or wounded. Hence, there’s sadly no shortage of cemeteries and other final resting places you can visit.

The most famous cemetery is Lone Pine. When first arriving there, you’ll think it is a peaceful and lovely spot, enhanced by the sight of the single pine tree, which provides a respite from the intense sun during the summer months. One could never imagine this being the exact site of one of the campaign’s bloodiest battles; most of it fought in hand-to-hand combat in an underground maze of trenches. Today over a thousand men are buried there, along with the unknown graves of roughly 500 soldiers. The Lone Pine Memorial commemorates 4,934 Australian and New Zealand troops killed in the sector with no known grave.

You’ll notice a recurring detail among the tombstones- as most of the fighting at Gallipoli was so fierce, the exact dates of death are not known for many of the soldiers buried there. Instead, a range of dates is given (for when the battle occurred) as the date of death.

Two other cemeteries you should visit are Beach Cemetery and Johnston’s Jolly; this contains only one identified individual.

Mustafa Kemal Atatürk will always be remembered as the Republic of Turkey’s founder, serving as its first president from 1923 until his death 15 years later. He was heralded for shaping Turkey into a secular state and especially for the advancement of women’s rights he ushered in. But before all that, he was a commander during the Gallipoli campaign. Many consider him and his military prowess a reason why the Allies were defeated and ultimately retreated from the peninsula.

“There is no difference between the Johnnies and the Mehmets to us where they lie side by side here in this country of ours.” Although there’s doubt by some as to the authenticity and origin of the quote, many believe Atatürk said these comforting and healing words at a commemorative event nearly 20 years after the campaign.

Atatürk was always a great leader and conscious of all families’ ultimate sacrifice when they lost their sons in fighting at Gallipoli. A life-size statue of Atatürk can be found at Chunuk Bair Hill, which was the site of the highest number of fatalities for New Zealand soldiers and where many are buried; you’ll also see the names inscribed of Maori soldiers who died here.

See A Side Of Turkey That Many Visitors Never Do

Gallipoli can be visited in a day from Istanbul, only a five-hour drive away. Yet, the Çanakkale Province receives a fraction of the number of visitors that places like Cappadocia and the Turquoise Coast do. (An exception is on ANZAC Day when Australian and New Zealand visitors descend upon Gallipoli in the thousands for the remembrance ceremonies.) But that means your experience will be all the more rich and authentic when you visit since it’s an area of Turkey not overrun with foreign tourists and globalization, which are dominating aspects of Turkey’s largest cities.

Being here means you’re also in close proximity to incredible sites like the ancient city of Troy (yes, THAT Troy where people like Paris and Helen and the infamous Trojan horse had such large starring roles), and Assos, which is where countless civilizations (the ancient Greeks, Romans, Persians, Ottomans) all lived at one time in history and where beautifully preserved Greek ruins can be explored.

You don’t need to hop on a plane or endure a long car ride to see and experience some of Turkey’s stunning coastline. The Çanakkale Province has truly breathtaking vistas for miles. Even Zeus thought so, as it’s believed (according to Homer) that he watched the Trojan War from atop the Altar of Zeus, which today is near the small town of Bergama. 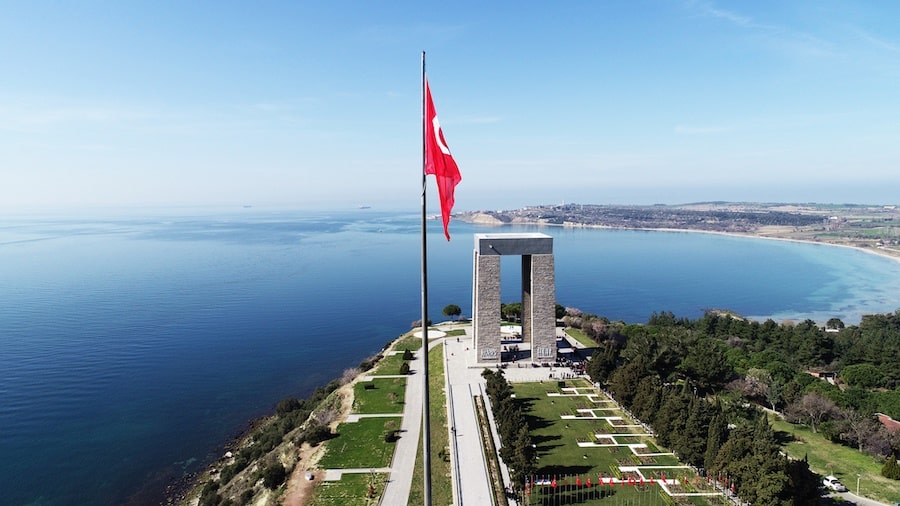 Istanbul’s Hagia Sofia and the Blue Mosque have become so iconic and known worldwide that most people could identify them from sight alone. And one can’t go perusing a travel-focused feed on Instagram a day without seeing photos of the hot air balloon contingent over the Cappadocian landscape.

Sure, all those places and experiences are memorable and worthwhile, but they’re no longer unique. A visit to the Gallipoli battlefield would be. You’ll bear witness to not only one of the most horrific military campaigns of World War I but also where three national identities were born-Turkey, Australia, and New Zealand. It’s not Greek history on a Homeresque level but still pretty monumental.

Here is some helpful info on getting and how to get around Gallipoli.

So, how do you get to Gallipoli?

There are various ways to reach Gallipoli, including by car, public bus, and group tours. Traveling by car from Istanbul will be the fastest and easiest way to get there (just around four hours’ driving), not to mention making it effortless for you to drive around the battlefield yourself.

You will need some sort of vehicle to get around the Gallipoli battlefields. Just as the Allied soldiers encountered nearly impossible terrain, you would too as a pedestrian.

Not to mention, the battlefield is so expansive that it’s unofficially broken down into ANZAC points of interest and English/French points of interest (the latter forces had been fighting already at Gallipoli a few months before the ANZACs landed there).

If you don’t have a car, consider taking a private or group tour. Depending on availability, these can be arranged in advance, traveling from Istanbul or in Ecebat and Çanakkale.

Crowded House is a recommended tour outfitter- it’s the only tour company based on the Gallipoli Peninsula (in Ecebat) that caters exclusively to overseas visitors. It’s also the only company that offers regular tours of the Helles battlefield, the area of Gallipoli where the British and French soldiers landed and fought.

When To Go To Gallipoli

The best time to visit Gallipoli is during the spring and fall months. Summer months will mean intense heat and blazing sun. Also, there is very little shade on the battlefield area, in addition to massive crowds, mainly from Turks on holiday. The Winter months are typically cold and rainy.

What To Pack For Gallipoli

Just dress accordingly, especially since all sites of interest at Gallipoli (except for private museums in the area) are outdoors. So in the summertime, come prepared with a hat and sunblock, and in the colder months, wear layers.

For more tips on what to wear in Turkey, check out our guide here.