Marija Bistrica: Is This Is The Most Spiritual Place In Croatia?

Home > Marija Bistrica: Is This Is The Most Spiritual Place In Croatia?

Marija Bistrica: Is This Is The Most Spiritual Place In Croatia?

How is it that a place like Marija Bistrica hardly gets a mention in the tourist guides?  A quick search on the area reveals two things. First, the earliest accounts that throw Marija Bistrica into the spotlight begin in the early 13th century.

Two brothers were engaged in armed conflict with one another over possession of the area. But the second and most crucial part of the town’s history surrounds The Basilica of Our Lady of Bistrica and the Black Madonna, which have both played a central role in the town’s overall development.

I’ve never heard anyone outside of Croatia tell me that they plan to go to Marija Bistrica. Never has anyone asked me about how to get there or what to do there. Yet, this town holds a unique charm and sense of divine healing that I’ve not yet felt anywhere else across Croatia.

As we drove into town looking for our hotel, we could not help but notice that the center of town, where we were staying, was a buzz of activity.

Should we find parking and leave our stuff in the car, and go to the hotel later? Asked Mr. Chasing the Donkey. It made sense after lunch on a Sunday afternoon, and there were so many people about. We just had to find out for ourselves what was going on. What we knew before coming was that the biggest drawcard of Marija Bistrica’s tourism is spiritual, but we discovered other treasures too.

The Queen Of Croatia

The reason that The Basilica of Our Lady of Bistrica has remained such a focal point throughout the town’s history is due to the Black Madonna. Officially crowned Queen of Croatia by the Archbishop of Zagreb in 1935.

This is not actually black, but rather a wooden relic created by an artist who remains unknown and was once inside a small chapel located on Vinski Hill.

When the Ottomans invaded the town in 1545, a local priest placed her inside a church wall underneath the stained-glass window for protection. Shortly after that, he died, taking her secret hiding location to his grave.

In 1588, it was reported that a bright light began shining from a specific place within the church wall, and once that location was excavated, the black Madonna was found once again. Throughout history, she was hidden again & was also inside the church when it was on fire, yet somehow she has remained intact. Was it divine intervention, much like Our Lady of Sinj, perhaps?

As I entered the church, blessing myself with Holy Water, the gold tones of the church reminded me more of an Orthodox church than a Catholic one. Not having researched the church before arriving, the impressive chandeliers and the sun piercing through the stained glass windows came as a complete surprise. I had expected the church to be much smaller and not so modern-looking with such a long history.

It is believed that the statue was carved around 1500 AD, with the current church erected between 1879-1882 by the Viennese architect Schmidt. In 1880, a fire ravaged the church’s interior, saving only the altar upon which the Black Madonna rested. Thus giving further evidence to the miraculous nature of the statue. The church has been expanded several times to accommodate the many thousands of pilgrims who flocked to Bistrica to be blessed by the Miraculous Virgin Mary over the years since, explaining why it was not the tiny, nondescript church I had anticipated.

Now the church and the town have become Croatia’s largest Catholic pilgrimage site, with up to 800,000 pilgrims each year coming to pray to the Queen of Croatia. Starting from the first Sunday after Easter all the way through to the last Sunday in October, there are thousands of organized pilgrim groups, solo travelers, and locals also taking a walk to pray along with the stations of the cross.

You’ll need to allow at least 30 mins, preferably longer, to wander and explore the paintings, alleys, and, of course, kneel at the altar with the black Madonna.

The Stations Of The Cross

Since 1943 pilgrims have been able to pray further to Our Lord and Our Mother, thanks to the introduction of the Stations of the Cross. Archbishop Antun Bauer and Aloysius Stepinac commissioned Italian sculptors to carve four life-size sculptures out of marble.

If you are not familiar, the concept of the Station of the Cross (which can be found all over the world) is designed for believers to reflect on the suffering of Christ as he made his way to his crucifixion. The additional ten stations were added over the following years, with artwork from notable Croatian sculptors such as Ante Orlića, Josipa Poljana, Marije Ujević, Ante Starčevića, Stanka Jančića, and Krunoslava Bošnjaka.

With the baby donkey in tow, making our way up the hill to pray and reflect was sadly impossible. The last thing people wanted to hear was a rambunctious 2-year-old chattering up the hill. So we’ll have to accomplish that part of Croatia’s most holy place another time.

With so many pilgrims, the church extends beyond the traditional space. At the base of the hill, there is an outdoor altar adjacent to the Stations of the Cross. The outdoor church and the surrounding area was filled with half a million people during the visit from Holy Father, Pope John Paul II, in 1998. The Pope addressed the faithful and beatified the revered Aloysius Stepinac in the Crkva na otvorenom, as it’s called in Croatian. One local told us,

“I still remember the day and still have no idea how so many people fit into our small town; it was amazing.”

Other Things To Do In Marija Bistrica

The advent season in Marija Bistrica is quite the event. A Christmas village shop is set up that has a robust offering of traditional crafts and other gifts made by local artisans. These gifts are truly unique and wonderfully made!

There are also workshops for kids and Christmas concerts during the season as well, not to mention if you are traveling with children, they are sure to love the presents that are given to the children in honor of St. Nicholas. Food and merriment are sure to be found during this festive time of year.

If you are traveling during the advent season, the Advent Market in Central Square is one that you do not want to miss!

That’s right; this time-honored tradition celebrated across the globe at midnight occurs at noon in Marija Bistrica.

The celebration occurs at John Paul II Square. Everyone that visits is sure to find plenty of food, spiced wine, and of course, fireworks to cap it off. There are also special performances by a celebrated musical band that is quite popular in the region.

This is a New Year’s Eve celebration unlike any other that you have experienced. An excellent way to feel like a local and get a bit of culture while you ring in the New Year.

Many different hiking trails lead out of the city and will have you meandering around the countryside for hours at a time. However, if you are the social type, then you might want to give the mountaineering club of Marija Bistrica a try.

They host an annual event that lasts about 3 – 4 hours. They are rest points along the way, as well as refreshments provided. Once the hike is completed, the participants go back to the starting point to celebrate the walk.

Music fills the air and plenty of food and beverages to fill the appetite that developed during the 3 – 4-hour hike. Also, various badges and awards are given out and several raffles where hiking participants can score some freebies. If you want to participate but do not feel that you can walk all of the trail, why not rent a buggy! This is one of the best events involving hiking that you can find in Marija Bistrica.

If cycling is your thing, try one of the 15 bike routes that wind from the city to the countryside and even other towns and regions.

Who knew that a city centuries-old has so much to offer.  Marija Bistrica has made quite a name for itself locally, and with tourism increasing, it is starting to garner attention as a tourist destination. Rich with history, alive with tradition, and old-world charm, Marija Bistrica is a place worth visiting. 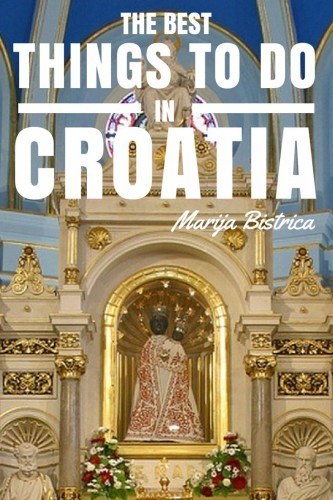 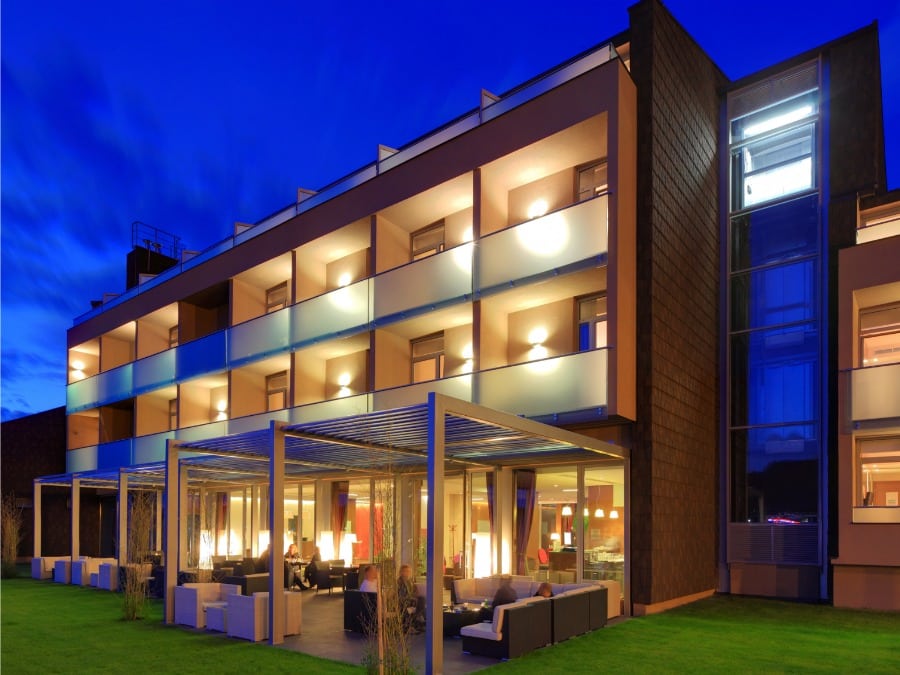 The finest hotel in Marija Bistrica is the Bluesun Hotel Kaj Maria Bistrica. Beautifully appointed plush furniture makes a statement in the lobby and spacious rooms that match. Hotel Kaj is a warm, inviting place to stay, with accommodating and smiling staff ready to help you plan your vacation in Croatia.

Hotel Kaj is located right in the heart of Marija Bistrica, and as such, you can park your car in one of the many parking spaces and set off on foot to explore the town. Kaj also has a wellness spa featuring aromatherapy and massage packages that left us relaxed and wanting more. Enjoy world-class traditional Croatian food with a modern twist, served in the on-site restaurant Academia. We highly recommend the pumpkin soup and the Vuclec Breg Sparking wine.

If you want to make the pilgrimage to Maria Bistrica for yourself, you can reach the town in under an hour from Zagreb, which is just 40km southeast of the Croatian capital city in the area known as Hrvatsko Zagorje.

Even if you are not Catholic, or indeed spiritual, a visit to the church is warranted, just to soak up the beauty of the architecture and to bathe in the sunlight beaming through the stained glass windows.

Have you ever been to Maria Bistrica,  The Basilica of Our Lady of Bistrica, or another sacred place in Croatia?