Originally written by Doruk Karadag from Top-Tier Traveler and updated by Chasing the Donkey writers.

Thanks to its incredible diversity, undoubtedly one of the best countries in the world to visit is Turkey. It is almost impossible to make a list of cities to visit in Turkey because every city (and even areas within cities) in this captivating country are very distinct from one another, and they all offer unique Turkish experiences to their visitors.

Istanbul is the number one place to go for the vast majority of tourists, while cities like Bursa and Trabzon are wholly overlooked. However, if you have the time, there is no reason why you should miss out on these lesser-known cities in Turkey. Each of these gorgeous cities are scattered across the astonishing country that is Turkey.

The key point here is “if you have the time.” I say that because Turkey is a vast country, and some of the Turkey cities and towns on this list require you to drive (if you have a rental car) or use buses and trains for very long distances. But once you arrive at each of these Turkish cities, you are guaranteed to understand why we suggested traveling the long distances!

As you will understand while reading (or maybe you already know this if you have been Turkey before), Turkey has a long and interesting history. From prehistoric civilizations to the mighty empire of Rome and the Ottomans, millions of people have called Anatolia home. This resulted in a cultural and historical richness in modern-day Turkey and is what makes each city on this list very special.

The east and the west, the north and the south, are quite different from one another, and while exploring them, many travelers feel like they are entering a new country each time.

That said, now it is time to discover the most underrated cities in Turkey…

Because of the numerous parks and beautiful mountains inside and around Bursa, it was given the nickname “Yeşil Bursa” (Green Bursa). It was once the Ottoman state’s capital, and its significance as an industrial center continues to this day.

The ski resort of Mount Uludag, which overlooks it, is a big draw for skiers in the winter. The mountain offers relief from the heat and beautiful mountain views in the summer. To get to the top, take the teleferik.

Cumalkizik, with its quaint cobblestone streets, is a preserved Ottoman village just outside of the city center that offers a glimpse into the typical Turkish way of life; come here for the massive village breakfast spreads.

At the Kayhaan Bazaar, you can buy ebru paintings, filography, ceramics and tiles, calligraphy, metal art, and Ottoman-period antiques. Also, the natural thermal spas and hammams are not to be missed!

Trabzon provides two types of entertainment: it is situated on the Black Sea in northeastern Turkey, and the Pontic Mountains run through it, creating a hill-station-like atmosphere.

The area provides a unique perspective on Turkey, one peppered with moments of silence. Explore the Sumela Monastery, which was established in 346 AD by the Greek Orthodox Church.

Spend the night near the Uzun Göl or Long Lake, watch the sunset over the Black Sea at Boztepe, and visit the Trabzon Ataturk Kosku museum to pay your respects to the nation’s founding father. One of the best Turkish cities to visit besides Istanbul, Trabzon also has its own Hagia Sophia, which is not the same as the one in Istanbul!

Kusadasi is a vibrant and enjoyable city to visit, and thanks to the numerous package-tour companies that operate here, it is a great holiday destination.

There are several hotels, restaurants, bars, and nightclubs along the coast for tourists to enjoy, with the party scene being especially unforgettable. And what is interesting is the fact that despite all of these facilities, Kusadasi (Aydin) still remains less popular than its neighbors Izmir and Mugla.

Aside from the beautiful beaches and breathtaking sea views, Kusadasi is well worth visiting due to its proximity to some fascinating historical and natural sites. The Ephesus archaeological site, one of the top archaeological sights to see in Turkey, is fascinating to explore, and the Dilek Peninsula National Park is ideal for getting in touch with nature. 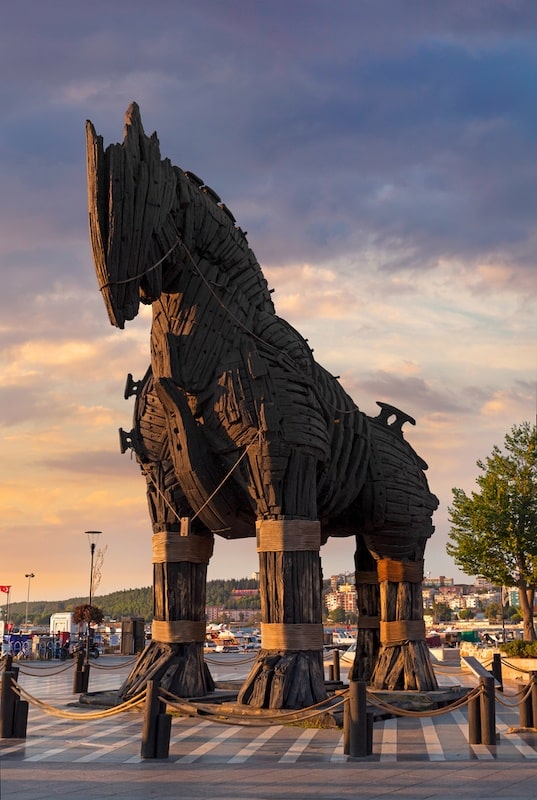 The seaport of Canakkale is located on the Asian coast of Turkey’s Dardanelles strait, in a region rich in ancient and modern history, as well as myths and legends that have stood the test of time.

In reality, many of the sights and activities in Canakkale are linked to the stories that have made the city famous. What is now Canakkale, which was first occupied about 6,000 years ago during the Copper Age, has seen numerous invading armies pass through the region and has been ruled by many states.

The legendary Trojan Wars and the Gallipoli Campaign, the most well-known battle between the Allied Forces and the Ottomans in World War I, both took place nearby, as did the epic love story Hero and Leander from Greek mythology.

The best activities to do here are: going on a historical tour in Gallipoli, visiting the many museums inside the city, admiring the huge castles and paying your respects at the monuments for the martyrs of the deadly First World War. This is easily one of the greatest hidden gems in Turkey.

Sanliurfa, also known as Urfa and ‘the Prophet’s City,’ has a wealth of beautiful old buildings strewn around town, and many people visit for pilgrimages or to refresh their spirits. Walking around the local bazaar is intoxicating as you try to take in all that is going on around you. It has a very Middle Eastern feel to it.

Though the city is rapidly evolving due to urban development projects, its ancient history is still visible in the form of the beautiful Dergah Park and Mosque Complex. A visit to the ancient Gobekli Tepe temple in Urfa is a must for anyone visiting the city, which is one of those wonderful non-touristy places in Turkey.

Konya is a romantic place, the kind that would entice poets and dreamers alike. It’s no surprise that Mevlana Rumi, the famous Sufi poet and whirling dervish, wrote his famous, heartfelt verses here in the 13th century. The Mevlana Museum, which is decorated with beautiful roses and houses the tomb of the renowned poet, should undoubtedly be your first stop.

Its Semahane houses a museum of religious artifacts from the time period. For an evening walk and a cup of Turkish tea, visit the Alaeddin Tepe park.

The Tile Museum and the Museum of Wooden and Stone Carving represent the other fine arts in Konya, ensuring that all art lovers have a great time!

Adana, Turkey’s sixth-largest city, sits alongside the Seyhan River and is surrounded by the rolling hills of the Cukurova region, which was immortalized in Yaşar Kemal’s classic novel Memed, My Hawk.

It’s best known for producing Turkey’s Adana kebab, and foodies would most likely prioritize trying this dish in one of the city’s restaurants when visiting. This city, on the other hand, has a lot more to give visitors.

Adana is one of the best towns in Turkey for exploring because the hinterland is dotted with archaeological sites and historic tourist attractions. It is also a great place to base yourself as you can travel to the eastern Mediterranean area of Turkey from here.

The Baklava Center in Turkey is well-known among foodies. The sweet treats of Gaziantep are well-known throughout the world. Beyond the sugar rush, there’s a lot to explore.

The Gaziantep Zeugma Mosaic Museum is a popular site. The museum houses one of the world’s most important collections of Roman-era mosaic floor art, all of which were rescued from the nearby Belkis-Zeugma archaeological site before it was submerged under the Birecik Dam’s waters.

Wandering the old town area of Gaziantep is one of the city’s true pleasures. Its numerous baklava shops and compact bazaar alleys, which are packed with traditional craftwork stores and historic coffee houses, could easily take up an entire day of your time. So, if you’re planning a culinary tour of Turkey, Gaziantep is absolutely one of the towns in Turkey to visit.

The history of Mardin reads like a “who’s who” of conquest. The town has been fought over by the Assyrians, Arabs, Seljuk Dynasties, Kurdish, Persian, Mongols, and Ottomans.

Today, this town of old stone houses spreads out underneath a cliff ridge in a maze of labyrinthine alleyways, providing plenty of old-world atmosphere and activities.

Mardin’s timeless allure attracts a new generation of tourists who want to soak up the cultural heritage rather than invade and conquer, thanks to its abundance of historic houses, some of which have been transformed into luxury hotels. Definitely one of those unique places to visit in Turkey if you’re looking for that undiscovered Turkey!

Located at the east end of Turkey, Kars is often referred to as the “Winter Wonderland” due to its high altitude and severe weather conditions. It is possible to see snow in Kars pretty much all year long. As a result, this city is home to a beautiful ski resort, Sarikamis, set on the foothills of the Allahuekber Mountain Range, making it one of the greatest, although also remotest, Turkey winter destinations.

Another aspect of Kars worth noticing is the Armenian influence in this city. Even today, a significant portion of locals have Armenian roots.

The most famous landmark here is the remains of the ancient Armenian city of Ani, which dates back to medieval times. Aside from the gorgeous churches still standing tall and proud, the scenery is also remarkable here in Ani, a fantastic place to experience off-the-beaten-track Turkey.

To sum up, it is safe to say that Turkey is a country of contrast and diversity. All of the famous Turkish cities, as well as beautiful villages in Turkey, mentioned on this list are unique in their own ways.

Whether it is natural beauty or historical background, each city has a story to tell. And one thing is quite sure: stepping outside the touristy places like Istanbul, Ankara, and Izmir is the best thing you can possibly do to make your trip to Turkey unforgettable. Hopefully, this list of the best off-the-beaten-path ideas in Turkey has helped you figure out where to go in this fascinating country!