The Most Beautiful Mosques In Turkey Not To Be Missed

Home > The Most Beautiful Mosques In Turkey Not To Be Missed

The Most Beautiful Mosques In Turkey Not To Be Missed

Turkey is packed with beautiful buildings, and it’s no surprise that many of them are mosques. Not just important places of worship, mosques in Turkey are designed in stunningly beautiful ways. Islamic art is at the center of all designs, and from ancient designs to newer versions, you’ll struggle to stop your jaw from stopping at the sheer intricacies of architecture and design.

Istanbul, in particular, is home to some magnificent mosques, but you’ll see them all over the country.

A Quick Word About Mosque Etiquette 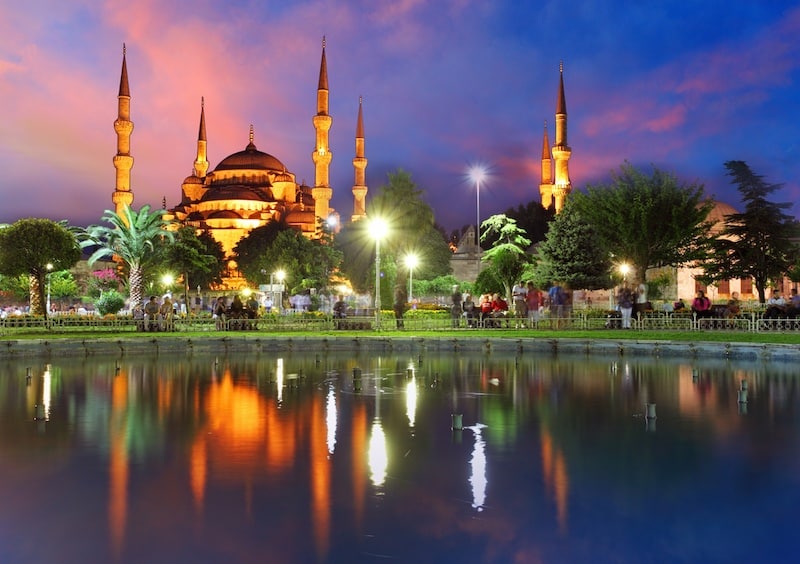 You don’t have to be going to a mosque for Muslim prayer to be able to enjoy the amazing architecture on offer, although know that you cannot visit during official prayer times if you are not Muslim. You should also do your best to avoid Fridays if possible, as this is the holy day and mosques will be much busier.

It would be best if you always were respectful when visiting any mosque, even simply admiring the design from outside. Remember that mosques are extremely important places of worship for Muslims, and any loud or rowdy behavior outside of one is prohibited and highly disrespectful.

If you are visiting a mosque and you want to go inside and explore, it’s entirely possible. Again, remember that these are working places of worship, which means people will be praying inside. Once inside, don’t speak unless you need to, but if you must, make sure that you keep your voice down to a whisper. Never point, and don’t walk in front of anyone who is praying. Also, it goes without saying that you should turn off your flash and never take a photograph of anyone praying.

Everyone will need to remove their shoes before going inside, and there is a safe spot to store your shoes just outside the main door. Remember to wear socks that day, and if you’re wearing sandals, throw a pair of socks in your bag to wear when you’re inside the mosque.

Women will need to cover their heads, so keep a scarf in your bag while you’re sightseeing, just if you see a beautiful mosque and want to go inside. Both men and women will need to dress modestly, so that means no short skirts or shorts, no low cut tops or crop topped, and tops should be below the elbow, with skirts/shorts/pants down to the ankle. 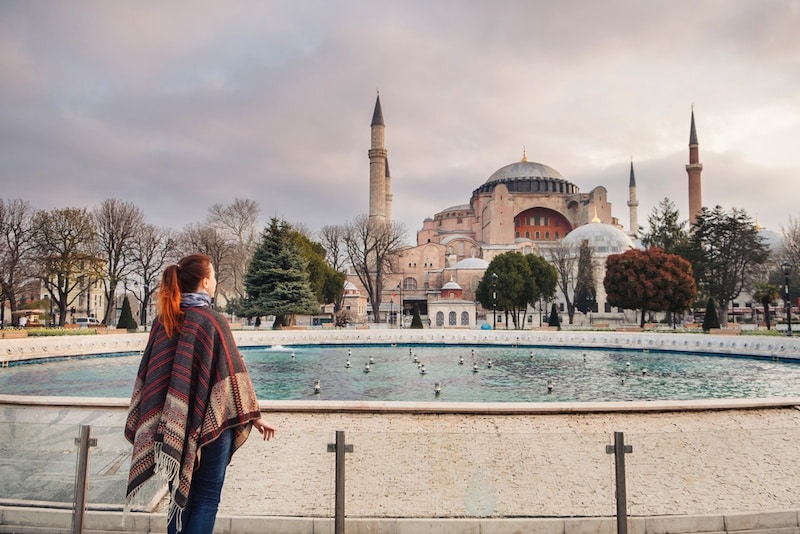 If the mosque attendants think you’re not wearing the correct attire, they will give you a shawl to wrap around your shoulders or wrap around your waist to cover your legs, but it’s best not to get to that point. Ladies, also try and avoid wearing skinny jeans or leggings as you’ll end up being asked to wrap a scarf around your legs – loose fitting is best here.

Now you know everything about mosque etiquette, let’s check out some of the most beautiful mosques in Turkey.

Uskudar is located on the Asian side of Istanbul and is a quite local and authentic neighborhood to visit. This is where you’ll find the beautiful Şakirin Mosque.

With beautiful Islamic art on display, huge curved windows, and a large globe chandelier, this may not be the largest mosque in Istanbul, but it’s one of the most remarkable. Designed by Zeynep Fadıllıoğlu, this mosque is a lot more modern than many of the others you’ll find in Istanbul, and that’s what makes it stand out. It is also the first mosque to be designed by a woman.

Blue Mosque is one of the most famous spots in the whole of Turkey, and it’s a genuinely stunning mosque to visit. But back in 1616, it was also one of the oldest buildings in the city, and it also stands out for having six minarets, the only mosque in Istanbul that has this number. Blue Mosque is one of the most notable displays of architecture from the Ottoman Empire, and it’s a mosque that is visited by millions every year.

The name comes from the blue tiles on the mosque’s interior, which gleam as the sunlight floods in. Without a doubt, this mosque will leave you jaw-dropped, and it’s one of the must-visit spots in Istanbul overall.

The first thing to know about Suleymaniye Mosque is that not only is it beautiful (hence why it’s on this list), but the complex that surrounds it is also very large. Having been built in 1557, there’s a considerable amount of history here. You’ll see gardens, fountains, amazing views, and buildings that date back centuries.

The second thing to know is that it’s situated high up on a hill and to get to it, you’ll need very comfortable shoes! But, the trek is more than worth it for the stunning architecture. Suleymaniye Mosque was designed by one of Turkey’s most revered architects of history – Mimar Sinan. It is a mixture of Byzantine architecture and Islamic artwork, and it’s one of the most beautiful sights you’ll ever see. That’s just the outside – once you go inside? Wow.

Selimye Mosque dates back to around 1569, and this is another of the famous architect Mimar Sinan’s pieces of work. The mosque is at the center of the city and forms the basis for everyday life.

It’s a stunning piece of architecture from the outside but once you go inside, look up. The intricate design of the tiles on the walls and ceilings are simply mind-blowing and the whole feel of the mosque, like all on our list, is so calm that you won’t fail to be moved by the entire experience.

Kocatepe Mosque is not only beautiful in design, but it’s also the largest mosque in the capital city of Ankara. It’s not that old, with construction beginning in 1967; however, you can see it from any point in the capital, so it’s undoubtedly a domineering sight. It’s also large, as it has the capacity to fit 24,000 people inside at any one time.

The interior is natural, and with massive domes and chandeliers, it’s breathtaking in its design, and the many colorful stained glass windows allow the sun to stream in, casting an ethereal glow.

Bursa is a large city close to Istanbul, and it is home to the Grand Mosque, another of Turkey’s most beautiful mosques. Bursa used to be the capital of the Ottoman Empire, although that name did move around a fair amount during the empire’s reign. In 1396, Sultan Bayezid I commissioned the mosque to be built, and it stands proudly in the center of the city today, with the huge slopes of the Uludag range in the background.

The mosque is built in Seljuk style, which makes it slightly different from the mosques we’ve talked about so far. You can feel the history all around you, and when you venture inside, the intricate design is truly stunning. The mosque has two minarets, and the entire complex is huge.

Despite the name, there is nothing new about this mosque. It has been undergoing restoration for a while now, but it’s one of the oldest mosques in Istanbul, having been built around 1660. It stands proudly on the main road, right in the center of the Golden Horn. It’s also very visible as soon as you start walking over the Galata Bridge, if not before.

Yeni Cami dates back to Ottoman times, and it has a huge 66 domes. The whole complex is huge, and the interior doesn’t disappoint either. It’s decorated with famous Iznik tiles, large soaring ceilings, and light pouring in from all sides.

From your standpoint on the pavement outside Fatih Mosque, you only need to turn your head to the sky and see the soaring building and domes in front of you. It’s imposing and truly beautiful in a strong and historical way.

You can tell this mosque is old, but not because it’s in ruins or anything like that, quite the opposite, but because there are whispers of the past all around. Having been built in 1463, Fatih Mosque is named after Mehmed The Conqueror, the sultan who, in 1453, captured Constantinople (as it was then called).

Again, the complex is vast, and at the height of the ottoman empire, it housed countless people and had a school of Islamic sciences inside.

Visitors to Adana won’t be able to miss Sabancı Merkez Mosque, as it dominates much of the skyline and sits right on the banks of the Seyhan River. The dome is 54 meters high, and the six minarets are 99 meters high. While it’s not a particularly old mosque built in 1998, it’s undoubtedly one of the most beautiful in the country and one of Adana’s most important and most significant landmarks.

The mosque is enormous and can hold around 28,000 people at any one time. Despite the newness of the mosque, it is built in a traditional style dating back to Ottoman times. The Iznik tiles are stunning, and the calligraphy artwork on the walls glisten as the light flood in from the enormous windows at the top.