Turkey is one of the most popular tourist destinations in the world. It’s home to some of the most beautiful historical sites on Earth, such as Istanbul’s Grand Bazaar and Topkapı Palace. Türkiye has a rich history and culture that is reflected in the landmarks it has to offer. From ancient mosques and churches to Ottoman palaces, there’s an abundance of sites for history buffs. What follows is a guide to some of top landmarks in Turkey.

Türkiye is a country that is best known for its deserts, mountains, and the Black Sea coastline. Although Türkiye’s landscape, architecture, and food are all remarkable, it’s the people who make it truly special. So, if you’re looking for a getaway but need help finding where to go, keep reading and discover why Türkiye should be your next destination!

Turkey is a land of stunning natural beauty. The country boasts an incredible array of landscapes, from its rugged coastline to its mountainous interior. And, of course, let’s not forget about the Turkish Riviera – one of the most beautiful stretches of coastline in the world.

But Türkiye isn’t just about pretty scenery. It’s also a country with a rich culture and history. From the ruins of ancient civilizations to Ottoman-era architecture, there’s plenty to explore in Türkiye. Add in friendly locals and delicious food, and you’ve got a recipe for a perfect holiday destination.

Türkiye is home to some of the world’s most beautiful historical landmarks. From the ancient city of Ephesus to the stunning beauty of Pamukkale, there is something for everyone to enjoy in Türkiye.

Pamukkale is a small town in Turkey’s Cappadocia region, known for its hot springs. The town is located at an altitude of 1,300 meters (4,265 feet) above sea level and has been a UNESCO World Heritage Site since 1986.

Pamukkale’s thermal waters were discovered in the early 20th century by locals who used them as natural spa treatments during their winter months. They date to around the 2nd century BC when Roman Emperor Trajan invaded Cappadocia from Syria with an army of 800000 men—the largest amphibious assault on record!

Today you’ll find dozens of hotels along the shoreline where you can soak up some sun or enjoy some fresh air while enjoying some local cuisine at one of many restaurants that serve up dishes made from ingredients grown locally: beans & rice, apricots & walnuts; tomatoes & peppers!

Cappadocia is a historical region in central Türkiye, famous for its unique geological formations and cave houses. The area has been inhabited since the Bronze Age when people started living in underground dwellings as they did not have enough space to build above ground. Oh, and of course, famous thanks to those scenic hot air balloon rides.

Those interested in Turkish nature may want to visit Goreme National Park in the Cappadocia area. This park is home to several rock-cut churches and monasteries that date back to the Byzantine era.

Hagia Sophia is a former Byzantine church later converted into an Ottoman mosque. It is located in Istanbul, Turkey, and was built in 537 AD by the Byzantine emperor Justinian I (527–565). The building became a mosque upon its conquest by the Ottomans, who abandoned it for another location when they conquered Constantinople in 1453. After being converted into an Orthodox Church by Patriarch Photios II (858-864), Hagia Sophia became a museum with worship practices resumed during major festivals such as Easter or Christmas breakers.

Topkapi Palace was the official residence of the Ottoman sultans for approximately 400 years. The palace complex is an excellent example of Ottoman architecture, and it contains many important artifacts, such as the treasury and harem, that are still on display today.

The palace itself was built by Sultan Suleiman I in 1550, but it was in 1620 when Topkapi gained its current name after being rebuilt by Selim II (who added more rooms to house his family). You can visit this magnificent site today if you’re interested in learning more about how Turkish culture has evolved over time through history!

Ephesus was one of the largest cities of the ancient world. It was a major center of early Christianity and is now considered a World Heritage Site. The ruins are located in Izmir province, Türkiye.

The city was founded by Greeks who came from Ionia on the west coast of Asia Minor (present-day Türkiye). It was colonized by Greek settlers from Miletus, who migrated there around 600 BCE. During its peak period between 350 BCE and 300 CE, it had an estimated population of over 100,000 people—about four times that of Athens at its height!

The Blue Mosque is located in Istanbul, Turkey. It was built in 1609 and has six minarets. It is one of the most famous mosques in Türkiye and is often referred to as “The Blue Mosque” because its interior walls are covered with blue tiles.

Sumela Monastery is located in Trabzon province, Turkey, and was built in the 6th century. The monastery is the oldest monastery in Türkiye, with a history dating back to 525 AD when it was founded by Saint Gregory the Illuminator. It’s also considered one of Europe’s most important cultural references for Christianity due to its Christian architectural styles and its location on a cliff near the Black Sea, making it visible from afar even today!

The Chora Church, also known as Kariye Museum, is a Byzantine church in Istanbul, Türkiye. It is situated on the grounds of the former Monastery of St. John the Baptist, and it’s believed to have been built during the 11th century.

The history of this building goes back to the 4th century when a monastery was founded by Emperor Constantine I at his palace on Palaiokastritsa hill, which was later renamed Chrysopolis (Holy City).

The church was converted into a mosque during Ottoman rule after being abandoned between 1453-1566 due to earthquakes and fires set by invading armies who used its stone walls as fortifications against Constantinople’s defenders led by Mehmed II, who conquered it twice before conquering it permanently in 1453 CE when he captured Constantinople while still under siege from Christian forces led by Giovanni Giustiniani who had taken control over much of Europe including Italy where Giustiniani died fighting off Ottomans outside Florence just days before Constantinople fell back into Islamic hands again at 1512 CE.

The Ani Ruins are a UNESCO World Heritage Site located in the Kars Province of Turkey. The city was once the capital of Armenia and was abandoned in 1045, but it has since been slowly decaying ever since. The ruins have been untouched for centuries because they are considered sacred by many nearby people. 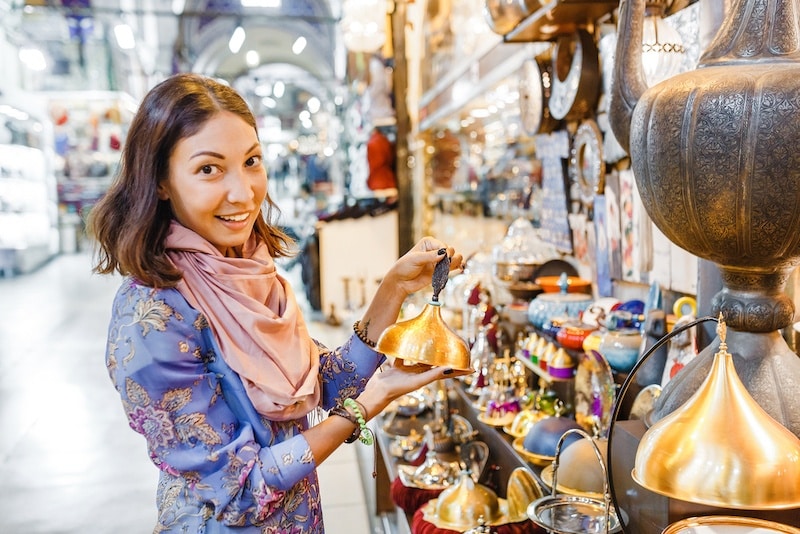 The Grand Bazaar is the largest and oldest covered bazaar in Istanbul. It is located in the Beyazit district of Fatih and was built by Sultan Mehmed II in 1455. The bazaar has been a key attraction for visitors to this city since it opened its doors to visitors from all over Europe who came to trade with local merchants during this era.

So Why Visit Türkiye?

Turkey is a country with a rich history and beautiful historical sites worth visiting. There are many more landmarks in Türkiye that we could add to this list! But other than notable landmarks, why else should you visit Türkiye?

Ohh Turkey has a lot of sights to see and culture to absorb. Türkiye is a land of many different cultures and landscapes; from the city sights of Istanbul to the beaches of Antalya, there is much to see and do in this beautiful country.

Türkiye is a land of contrasts. The country is home to some of the most stunning natural scenery in the world and bustling metropolises full of culture and history. With so much to see and do, it can take time to figure out where to start. That’s why we’ve put together so many guides on how to make the most of your time in Türkiye.

Reasons To The Question “Why Visit Turkey”

There are many reasons why Türkiye is one of the most beautiful counties in the world:

A diverse landscape is one of its most defining features. The country has several mountain ranges, including:

In addition to these natural wonders, Türkiye also boasts several rivers, including:

No matter what your interests are, Türkiye has something for you. If you’re looking for an adventure, there are plenty of outdoor activities to keep you busy such as:

While these are all popular pastimes in the country if you prefer to stay indoors, Turkish cities offer a wealth of museums, galleries, and historical sites to explore.  And, of course, no trip to Turkey would be complete without sampling the delicious Turkish cuisine.

And the main reason to visit Türkiye is, of course:

It’s people. Finally, Türkiye is home to some of the most hospitable people in the world. Visitors to Türkiye are often struck by the warmth and generosity of the Turkish people. This hospitality extends beyond just tourism – Turks are also known for their charity work and their commitment to helping those in need.

Whether you’re planning a short trip or a more extended vacation, following our tips will help you make the most of your time in Turkey.