Montenegro, Croatia’s much less-known southern neighbor, is filled with spectacular scenery. From the coastal cliffs in the Bay of Kotor to the Adriatic coast towns like Budva and Sveti Stefan to its inland national parks. If you’re into outdoor adventures, there’s no better place to go in Montenegro than Durmitor National Park.

The Durmitor mountains, located in the northwest of the country, are a vast mountain massif and the namesake of Durmitor National Park. Carved and shaped by glaciers many thousands of years ago, these mountains are cut by canyons, rivers, and underground streams while alpine meadows and ancient forests cover their slopes.

Durmitor National Park is home to a remarkable biological diversity. There are, for example, more than 1,600 different vascular plants. It offers a refuge for old-growth European black pines, thought to be remnants of the vast primeval forest that once covered Europe from the North Sea coast to Russia.

In terms of wildlife, if you’re lucky enough, you might spot European wild cats, gray wolves, and the occasional brown bear. This biological variety and the park’s fascinating geological history are the main reasons UNESCO declared it a World Heritage Site in 1980 and is also a reason this park made it on our list of best things to do in Montenegro with kids.

Having been home to farming people for centuries, tough people who managed to survive in this harsh environment, the Durmitor massif played an essential role in World War II. Because of its ruggedness, it was a stronghold of the Partisans in their resistance against the Nazis.

The trails in the park and the small town of Žabljak are littered with monuments and memorials to the guerilla fighters who fought and died for their country during the Second World War. They’re still seen as national heroes in Montenegro.

The commander of the guerrillas was a man named Josip Broz Tito, who would later become Yugoslavia’s dictator. He commemorated his comrades by establishing the country’s first national park in the Durmitor mountains, Durmitor National Park.

Fun fact: Durmitor is thought to come from a word in the Balkan Romance dialect meaning “sleeping place.” It is related to the English word “dormitory.”

From mind-boggling depths to soaring highs, Durmitor National Park encompasses no fewer than 48 mountains higher than 2,000 meters (6,560 feet). These peaks rise majestically above high plateaux and alpine meadows, making up a wild landscape of serrated mountain ranges. This is a dream destination for hikers and campers. Prutaš is the most beautiful and the largest of the peaks, which is an impressive 2393 meters.

Additionally, arguably what characterizes Durmitor National Park the most are its eighteen glacial lakes. Called “gorske oči” by the locals, a name that translates as “eyes of the mountains,” these shimmering lakes are stunningly beautiful.

Needless to say, this kind of landscape has plenty to offer to adventure-minded visitors. Durmitor National Park is a magnificent destination for everything from hiking and rock climbing to canoeing and whitewater rafting.

Especially whitewater rafting in the Tara River Canyon is spectacular. Defeating rapids and meandering through rocks, you’ll remember this adventure many years. As spectacular as the canyon is from above, the best views are from the water. There’s no experience quite like this anywhere else in Europe. Although this might not be the most adrenaline-fueled whitewater rafting on the continent, the landscape is absolutely unparalleled.

Numerous hiking trails wind their way across the mountain landscape, running past glacial lakes, through dense pine forests, and along gorges. There are trails to suit every visitor. However, do make sure to check up on the weather forecast. This is a high-altitude destination, and even in summer, fog and low temperatures are possible. Summer thunderstorms happen regularly as well. And don’t forget to bring water – we recommend carrying a collapsible water bottle.

If you’re prepared, Durmitor National Park offers some of the most rewarding hiking in southern Europe. It’s much less crowded than other mountain ranges, such as the Dolomites or the Pyrenees, making for a quiet and secluded, even more memorable, experience.

In winter, these mountains become one of Montenegro’s most popular winter sports destinations. Cross-country skiing, downhill skiing, and snowboarding can all be enjoyed in Durmitor National Park in winter.

Getting to Durmitor National Park

The main gateway to the park is the town of Žabljak, situated at the park’s eastern edge. It’s the only town inside Durmitor National Park. While this is by no means an attractive town, it does have all the necessary facilities, including a bank, a post office, hotels and restaurants, and a supermarket.

Remember that this is a remote region; reaching the park is only possible by car or bus. It’s about 3.5 hours from Podgorica and 10 hours from Belgrade. 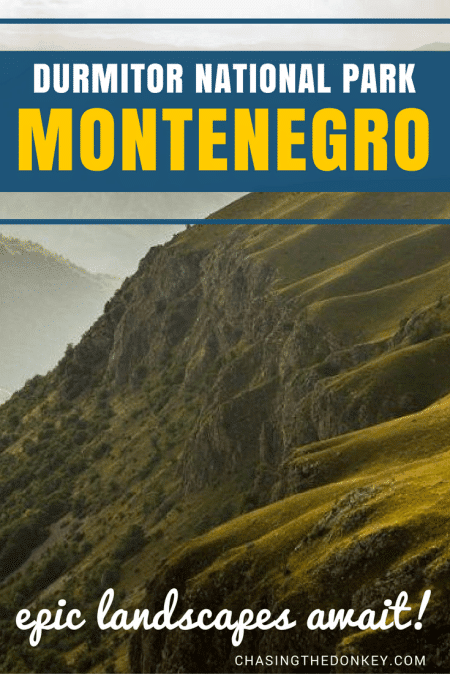 Do you feel that Durmitor National Park is for you? Are you ready to go?