Blessed with about 1,800 kilometers of mainland coastline and more than a thousand islands and islets, Croatia is arguably the best destination in Europe for boating, water sports, and scenic island cruises.

Driving along Croatia’s glorious, endless coast is an excellent way to get around Croatia. Still, we strongly recommend that you include a ferry or catamaran ride in your itinerary as well.

If you want to visit a Croatia island, ferries are the only way to get there. A typical Croatia vacation involves both the use of rental cars and catamarans or ferries between Croatia islands.

Type in your to and from the destination, and get rates or book your tickets now:

Croatia Ferries: How To Travel Between Coastal Cities & Islands In Croatia

Because of the many coastal cities and a vast number of visit-worthy islands, the Croatia ferry schedule is rather extensive, and the network of Croatia ferries is extremely dense. This makes it super-easy to pick and choose routes by doing so, creating your own Croatia ferry itinerary (if that’s what you’re going for).

However, there are so many options that it would be impossible for us to list them all here. Instead, we’ll provide a comprehensive overview of how to get to and from the major destinations by ferry—places such as Pula, Zadar, Split, and Dubrovnik, as well as a few popular islands.

You’ll notice that these individual places’ names appear all over the list below. This indicates the density of the Croatia ferry routes network, showing that you can conveniently jump from one destination to another. It’s no surprise that “Croatia island-hopping” is an actual niche in the tourism industry in Croatia.

We’ll start with an overview of major ports and islands and end this post with a list of recommended/popular companies that operate catamarans and ferries in Croatia. 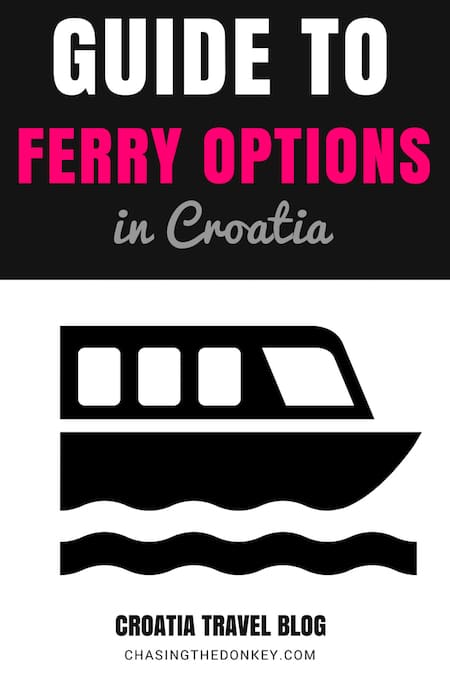 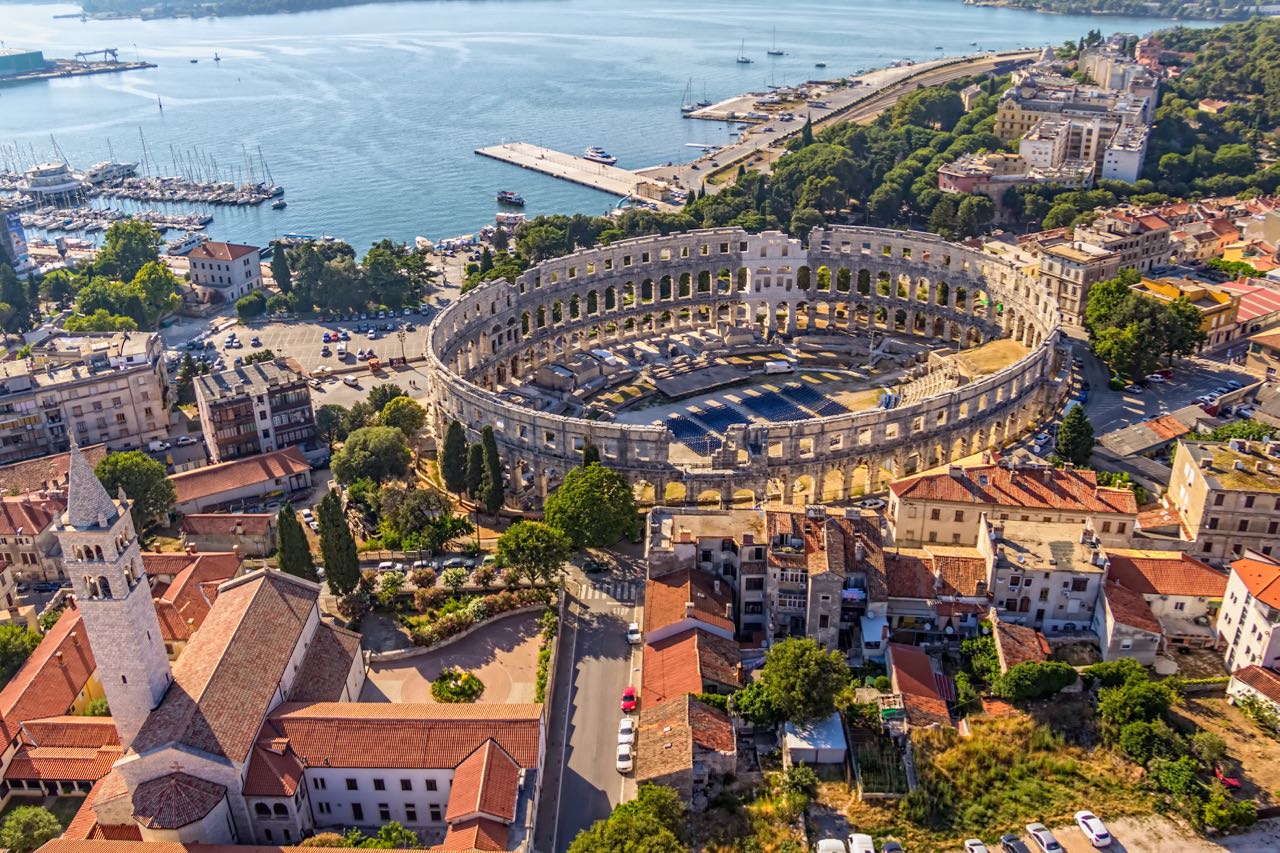 Pula is the largest city in Istria, a gorgeous rural peninsula in the northeast of the country. Characterized by olive groves, truffle forests, and exceptionally picturesque hilltop towns, Istria also boasts a long beach-lined coast dotted with pretty towns.

As the region’s largest city and principal port, Pula is the best place to travel to and from Istria by ferry. When you’re in the city, make sure to visit the magnificent Pula Arena. It’s one of the largest and best-preserved Roman amphitheaters in the world.

Although Pula is not serviced by the main Croatia ferry company, Jadrolinija (see below), you can still get there from various places. For example, there are sailings from Trieste and Venice to Pula a few times a week and from places within Croatia, such as Zadar and Mali Losinj.

Every ferry that travels to Pula returns to its departure port. This means there are ferries from Pula to Trieste, Venice, Zadar, and Mali Losinj.

The northernmost coastal city in Dalmatia, Zadar, is the oldest continuously inhabited city in the country, with its roots dating back to well before Roman times. However, the Romans brought progress and prosperity to the city, building typical buildings and urban landmarks, some of which are still there today. The walled Old Town features gorgeous architecture, cobbled streets, and a superb waterfront promenade.

Zadar is one of the best-served ports on the central coast of Croatia, making it super-easy to get to Zadar by ferry from various places. Note that there are no direct lines between Zadar and other major coastal cities in Dalmatia. There is, however, a direct Ancona Zadar ferry and a direct Pula to Zadar ferry.

If you’re looking for a Zadar to Split ferry, Zadar to Dubrovnik ferry, or Zadar to Hvar ferry, you might be disappointed. As mentioned above, there are no direct lines between Zadar and other major Dalmatian cities.

There are, however, direct connections between Zadar and local islands, such as Dugi Otok, Molat, Iž, Rava, and Sestrunj. Many of these islands are also interconnected by ferry lines, which is great for island hopping in northern Dalmatia. If you want to visit Italy, you can also catch a ferry to Ancona.

This area in the heart of Split is still its beating heart, a maze of alleyways, Roman ruins, museums, and beautiful stone buildings. Split has one of the largest ports in the Adriatic and is a central transportation hub in the region.

Split is reachable by ferry or catamaran from many Dalmatian islands and Trogir. There is also a direct Ancona to Split ferry. It’s arguably the busiest port in Dalmatia, served by various companies operating Croatia ferries and catamarans.

Jadrolinija can get you to Split from popular islands like Brac, Hvar, and Korcula, while the network is complemented by various routes run by smaller ferry companies. With some scenic island hopping in between, you can quickly get to Split from Dubrovnik, too.

A wide range of ferry routes radiate from Split to all major Dalmatia islands, making it the best possible base for island excursions. For instance, getting from Split to Hvar is no more complicated than merely hopping on a ferry.

There is a Split to Hvar Island ferry, a Split to Korcula ferry, and ferries to Lastovo, Solta, and Brac. You can continue from most of those islands to other islands and eventually to Dubrovnik. They may not be a direct Split to Dubrovnik ferry, but you can get there via one or more Dalmatian islands—the ultimate Croatia boating trip!

Possibly Croatia’s most famous destination, fairytale-like Dubrovnik, is one of the most photogenic old cities in Europe. Its massive city walls, combined with the iconic red-roofed houses, attract thousands of visitors each year.

The entire Old Town is designated and protected as World Heritage by UNESCO. A popular beach vacation destination and a major stop for Mediterranean cruise ships.

Located in the far southern tip of the Croatian mainland, Dubrovnik is a bit more remote than Split. As such, there are fewer ferry options. That’s not to say, though, that taking a ferry to Dubrovnik is particularly tricky.

There are still several options. For starters, you can get to Dubrovnik by ferry from popular places such as Sipan, Mljet, Hvar, and Korcula, most of which are also connected to Split. International travelers will relish traveling to Dubrovnik from Bari, Italy.

If your trip starts in Dubrovnik, you can easily make it to most other coastal areas in Croatia by island hopping. Dubrovnik is a great base to explore the Dalmatian islands, arguably Europe’s most beautiful archipelago.

There is no direct Dubrovnik to Split ferry, but you can scenically travel between both cities via a couple of islands.

One of the largest and most populated Dalmatian islands, Hvar is a super-popular tourist destination. The island is different from most other islands in Croatia because of its fertile plains and freshwater springs, resulting in an abundance of orchards, vineyards, and lavender fields. Additionally, Hvar also has its own historic town—Hvar Town—a hotspot for both culture and nightlife.

Find yourself a place to sleep on the island, then explore to your heart’s content!

The island of Hvar is serviced by Jadrolinija lines from both Split and Dubrovnik. In fact, it is a popular connecting point en route from one place to the other in both directions. You can also get to this gorgeous island via Korcula, Brac, Drvenik, Lastovo, and Vis.

Once you’re in Hvar, you can continue your journey to other Dalmatian islands—the ones we mentioned above: Korcula, Brac, Vis, and Lastovo. There is also a direct Hvar to Split ferry, while the Hvar to Dubrovnik ferry stops in Korcula first. 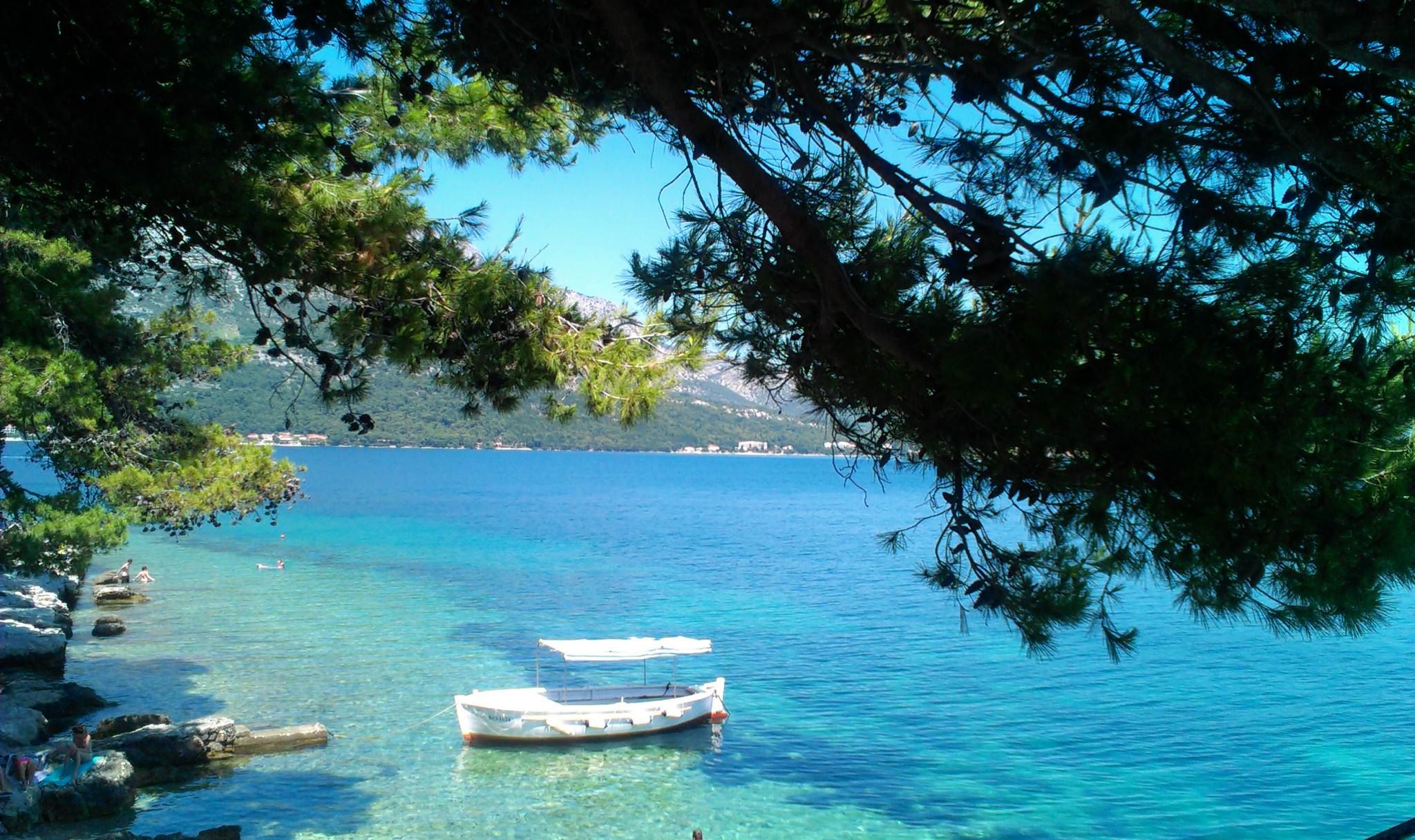 Another hugely popular Croatian island is Korcula, whether for day trips from the mainland or as a vacation destination in itself. Korcula is like a miniature Croatia, home to historic towns, hidden beaches, beautiful coves, and inland woodlands.

The Old Town of Korcula is a significant historical highlight, while hiking, cycling, and various water sports draw in active travelers.

Just like Hvar, Korcula is easily reached from other nearby islands and Dubrovnik and Split. There is a direct line from Split to Korcula, which stops in Hvar first. The ferry from Dubrovnik to Korcula is a straight shot, without any stops in between.

Additionally, there are also Korcula ferries from Brac, Lastovo, and Orebić.

From Korcula onwards, it’s the same story as above. There is a direct Korcula to Dubrovnik ferry, while other major Dalmatian destinations like Hvar, Brac, Lastovo, and Split are also a fun ferry ride away. 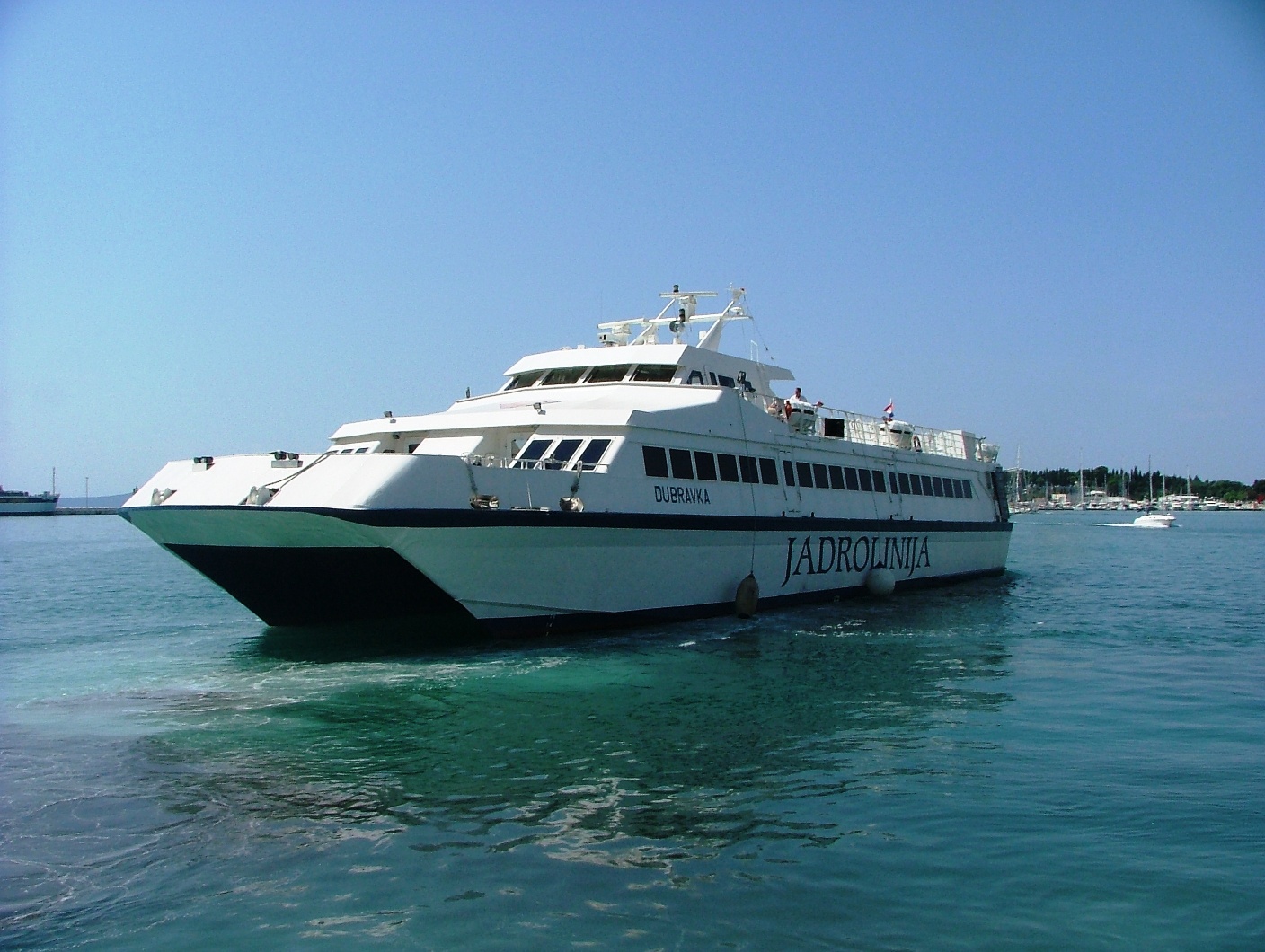 Although many companies are operating Croatia ferries, there is only one main one—huge. As the country’s (un)official ferry line, Jadrolinija handles most ferry routes in Croatia, offering a vast number of ferries in Croatia.

It operates year-round, and its network of routes is exceptionally comprehensive. This is also the only company operating car ferries in Croatia. So, if you have a rental car and would like to bring it to an island or another coastal city, this is where you should book your Croatia ferry tickets.

In 2018, Jadrolinija had numerous intranational routes along the Croatian coast and also has four international lines. Its local lines are divided into four regions—Rijeka, Zadar, Šibenik, Split, and Dubrovnik—while the international lines travel from a select number of cities to Ancona or Bari in Italy. Jadrolinija has by far the most options—no other Croatia ferries even come close—and can take you to virtually every popular holiday spot that’s reachable by boat.

Remember: the Jadrolinija car ferry is your only option if you have a car. Luckily, the company can get you basically everywhere.

Other Mention-Worthy Catamarans & Ferries In Croatia