Sofia shouldn’t be absent on any Bulgaria itinerary. The country’s capital is one of the most underrated capital cities in Europe, filled with gorgeous architecture, art galleries, inviting parks, and plenty of historical sites. Sofia deserves some serious exploration.

You don’t need more than a couple of days to see this city and visit the delicious restaurants, though. So, once you’re done, you might want to rent a car and explore some other destinations in Bulgaria. Using Sofia and the great selection of hotels as a base, there are several places you can visit on day excursions. The following are the ten best day trips from Sofia.

One of the most beautiful natural attractions in Bulgaria, the seven Rila Lakes, is only 90 kilometers from the city and among the most beautiful spring destinations in Eastern Europe. This collection of glacial lakes are located at different altitudes in the highest mountain range in the Balkans. A hiking trail leads past each lake, ending at a viewpoint that overlooks all seven lakes. The hike takes three to four hours and is possibly the most incredible hike anywhere in Bulgaria. 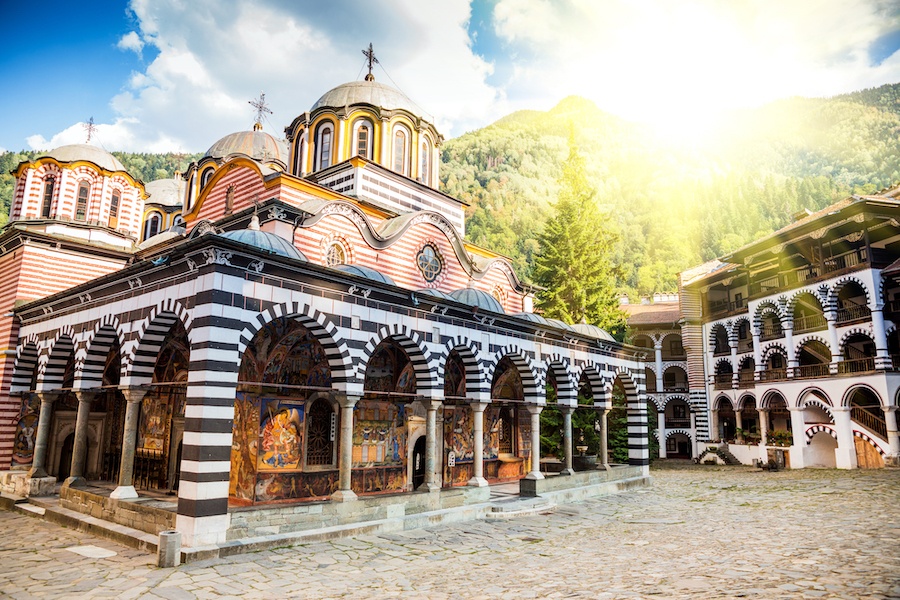 While it bears the same name as the attraction above, the Rila Monastery has nothing to do with it. The only similarity is that it also lies in the Rila Mountains. This major cultural landmark was founded in the 10th century and is one of Bulgaria and the Balkans’ most significant monuments. A fantastically colorful structure, the Rila Monastery is a UNESCO World Heritage Site, indicating its enormous cultural and historical importance.

Sometimes regarded as the oldest continuously inhabited city in Europe and one of the oldest in the entire world, Plovdiv’s history goes back to the 6th millennium—that’s right, millennium—B.C. It’s a couple of millennia older than the Egyptian pyramids. Think about that for a second.

Unsurprisingly, the city is home to a wealth of historic monuments. The most important ones are the Ancient Theater, the Ancient Stadium, the Roman Forum, the remains of the 2nd-millennium-B.C. Thracian city of Eumolpias, and about 200 other archaeological sites. If you like antiquity, you can’t find a better place anywhere in the Balkans than Plovdiv.

Grab a room at one of our top Plovdiv accommodations to spend more time exploring.

An old Bulgarian capital, Veliko Tarnovo, lies in the north-central region of the country. This is the destination furthest from Sofia on this list. There is a direct train connection between Sofia and Veliko Tarnovo, but it still takes about four hours to get there. Make sure to catch the earliest train of the day.

The main attraction here is Tsarevets Fortress, the most important and powerful stronghold of the Second Bulgarian Empire.

This series of cascading waterfalls near the village of Krushuna lies in the north of the country. Famous because of their remarkable landscape of travertine dams and lakes—people who have visited Plitvice Lakes in Croatia know what the result of this natural phenomenon can eventually be—, these waterfalls are exceptionally photogenic and one of the top natural attractions in Bulgaria. 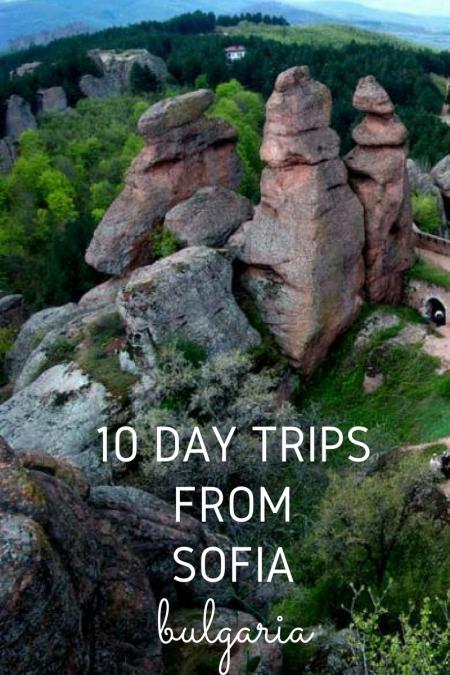 Somewhat surprisingly, the climb to the summit isn’t that technical or challenging. You can quickly drive there from Sofia, climb the mountain, hike down and head back to the capital in one day. Count on four hours to reach the top, another four hours to get back down.

A karst cave near the village of Karlukovo in the province of Lovech, Prohodna Cave, is 262 meters long, making it one of the longest caves in Bulgaria. It’s famous for its two holes in the ceiling, resembling two massive eyes. This cave isn’t popular among only hikers and cavers, but rock climbers and even bungee jumpers find some entertainment there as well.

One of Bulgaria’s most popular tourist attractions, Belogradchik, is attractive for various reasons. The town of Belogradchik is the base for all touristic activities, while the Belogradchik Rocks are arguably the area’s greatest landmark.

This collection of strangely shaped sandstone formations are an extraordinary sight, made even more impressive by the local folkloric tales associated with them. Another major highlight in Belogradchik is the Belogradchik Fortress.

The town of Melnik is an architectural preservation in Bulgaria, with almost 100 of its buildings designated as cultural monuments. Interestingly, this is also the smallest official city in Bulgaria, home to no more than 400 people.

Additionally, Melnik is one of the best day trips from Sofia because of the nearby rock formations. The “Melnik pyramids,” as they’re sometimes referred to, are imposing sandstone rock formations in various shapes. To top it all off, there are great vineyards in the area as well.

One of the easiest day trips from Sofia is Vitosha Mountain. Located just outside the Bulgarian capital, this mountain massif forms the backdrop of the Sofia skyline. It is the city’s closest destination for outdoor recreation like hiking, skiing, and rock climbing.

Vitosha Nature Park, the oldest of its kind in the entire Balkans, encompasses the mountain, including the area’s most popular places. And there are many attractions to see and visit on Vitosha Mountain. Those include the iconic Boyana Waterfall, the beautiful Cherni Vrah summit, the Dragalevtski Monastery, the Golden Bridges stone river, and many more.

If you’re looking to escape Sofia for a while, Vitosha Mountain is one of the best places to go for a Sofia day trip. Although many visitors know of the locally famous mountain, few take the time to actually hike up it. It’s quite easy to reach the top, no need to take an expensive tour with a guide or anything. Simply make your way toward the foot of Mount Vitosha using public transport (Bus 93 and 122 will get you there from the city center) and find one of many trails to start climbing.

In case you’d like to do as little climbing as possible, but still want to take in the excellent city views and breathe the fresh mountain air, Bus 66 will take you near the Aleko area, which is the highest you can climb using public transport.

Sofia may well be the only European capital city with such a large mountain nearby. Don’t miss your chance to explore nature so conveniently. Make a day excursion out of it! 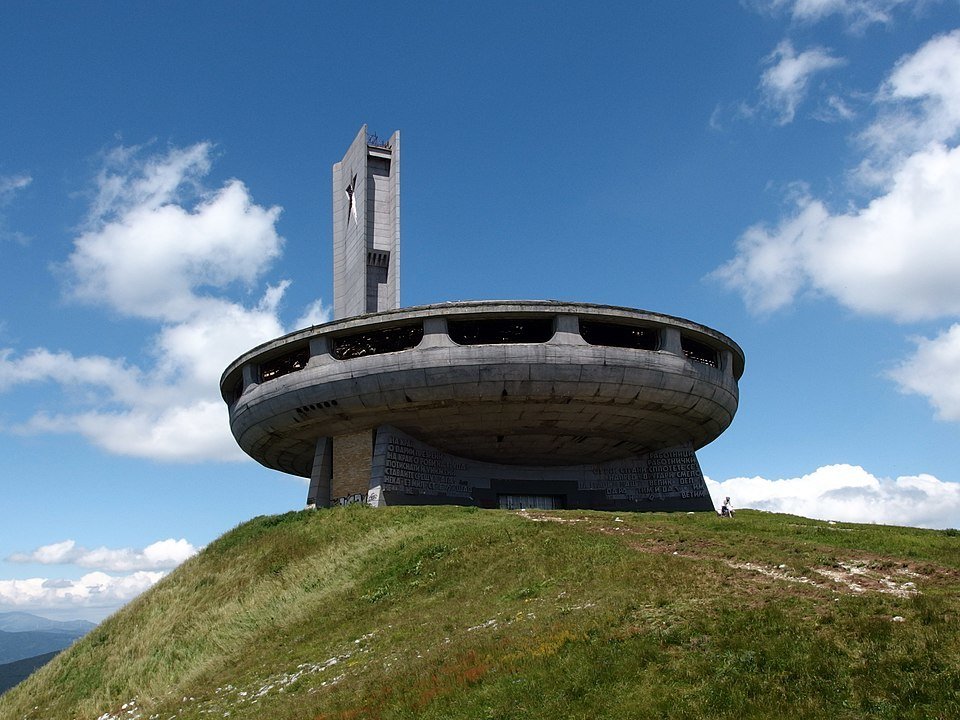 A historic mountain summit in Bulgaria’s Central Balkan Mountains, Buzludzha is near Shipka Pass and the town of Kazanlak. It is famous for its now-abandoned Monument House of the Bulgarian Communist Party, which stands atop the peak. The mountain itself was the location of an 1868 battle between Bulgarians and Turks, while a group of socialists gathered at the summit to discuss the country’s socialist future.

Because of this historical character, the communist government in Bulgaria, which was under the influence of the Soviets, chose Buzludzha Peak as the site for a communist monument. Work started in 1974, but this flying saucer-shaped monument became abandoned after the fall of communism in Bulgaria in 1989.

Nowadays, the building is closed off to the public to prevent vandalism and is currently listed as one of Europe’s most endangered heritage sites. However, you can still explore the mountain itself and walk around this striking and unusual landmark. You will need a car or some other private transportation form to visit Buzludzha Monument on a day trip from Sofia.

If you want to learn more about the Bulgarian culture and identity, make your way to Koprivshtitsa. Known for its significant role in the uprisings of April 1876, the town is also renowned for its typical Bulgarian architecture and folk music festivals.

With so many options for day trips from Sofia, how will you pick just one!?