14 Bulgarian Festivals You Need To Check Out

Home > 14 Bulgarian Festivals You Need To Check Out

Top 14 Bulgarian Festivals You Need To Check Out

Written by travel writer, Bilyana from Owl Over The World and Chasing the Donkey.

Bulgaria is a country with rich culture and unique traditions. Bulgarians are very proud of them, and they have been passed on from generation to generation for years, if not decades or centuries. From chasing evil spirits away to dancing barefoot on smoldering embers, Bulgarian traditions showcased at these festivals in Bulgaria will leave you feeling “WOW,” and it is a guarantee that they will put a smile on your face.

Bulgaria is famous for its roses. The country is one of the biggest producers of rose oil in the whole world. The Bulgarian “attar” of roses is a major component in the perfumery business across the globe. It is also used in the space industry, as a greasing component in space equipment, due to its resistance to temperature changes.

The Rose Festival is held in Kazanlak, part of the Rose Valley, and is held every year during the first weekend in June. The festival was first celebrated in 1903; since then, it has been kept going by generations of enterprising people from the valley. Nowadays, this is one of the Bulgaria festivals that has become an international event visited by thousands of locals and tourists.

Nowadays, the festival has become an international event visited by thousands of locals and tourists. During the festival, three events are a must-visit: the parade along the town’s streets, the election of Queen Rose, and the early morning ritual in the rose fields. You can also visit the Museum of Roses in Kazanlak.

Taking place annually for two days in the second half of June in Kyustendil, known as Bulgaria’s “Fruit Garden,” the Cherry Festival is one of the greatest Bulgarian festivals. The celebration of the area’s fruit orchards started with the first national fruit exhibition in the country in 1896, and its popularity has only grown since then.

The Cherry Festivals is focused on, well… cherries. These tasty fruits and their gorgeous blossoms are the stuff of myths and beauty in many countries worldwide. At the festival, you’ll find countless tables loaded with buckets of cherries, all part of a competitive exhibition.

Additionally, many products are made from cherries, from cherry cakes and jam to carved cherrywood. Even the tables are part of a competition—the most beautiful table wins!

Nestinarstvoto, which is fire dancing, is one of the oldest Bulgarian traditions. It was practiced in Thrace in the past, and today it is preserved only in three villages in the Strandzha Mountain – Bulgari, Brodilovo, and Kosti. According to some researchers, the ritual roots lay in Bulgaria’s pagan past and are derived from the cult of the Sun in the Thracians.

The day of the ritual starts with a dressing of fire-icons. Then with the procession, which includes the whole village, icons refer to the holy spring of St. Constantine, where the ritual washing of the stalk is conducted.

After sunset, the people would build up a massive fire and dance the traditional Bulgarian dance (Horo) until the fire dies and only embers remain. After that, the culmination of the tradition begins. Nestinari, in a state of trance, enters the circle with shouts, and the first one crosses the embers of the cross and then the others.

Nestinari, now in a trance state, enters the ring of fire with shouts, and the first one crosses the embers, and then the other Nestinari enters the circle. It is believed that they don’t feel the pain from the raging fire due to being in a state of trance.

The festival is included in the UNESCO list of Intangible Cultural Heritage. Today the ritual is best preserved in the village of Bulgari in Strandzha Mountain and is held every year on 3 June. 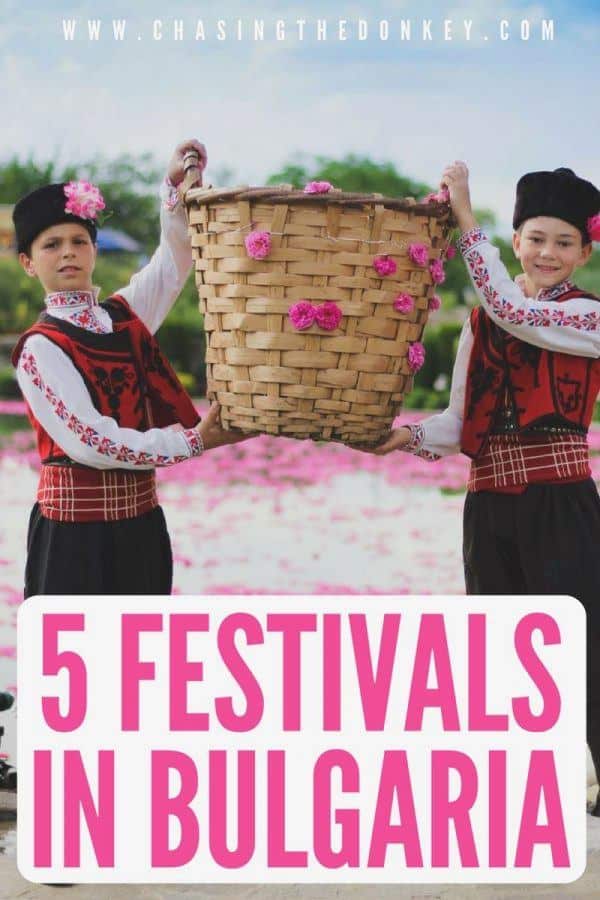 The International Festival of Masquerade Games “Surva” in Pernik is the biggest one in Bulgaria and the Balkans. It’s one of the most outstanding traditional folk games and customs performances with masks worldwide.

In the past, the ‘mummers’ were dressed in a mix of male and female clothes and scary masks. They hang from themselves bells and cowbells; they carry swords or sticks to scare away the barren winter and the evil spirits. Nowadays, the festival is a joyful celebration that aims to recreate the past and bring joy and fun. The festival is held annually on the last Friday, Saturday, and Sunday of January.

The festival is held annually on the last Friday, Saturday, and Sunday of January. Traditionally the festival involves about 6000 people from over 100 masquerade groups from all Bulgarian regions. People come to participate for the emotion and the fun.

Arguably the most unusual of all major Bulgarian festivals is the International Bagpipe Festival, which takes place in the village of Gela in August. This traditional festival, preserved by the Rhodope Mountains people and clans, aimed to promote their folklore and culture.

While many people associate bagpipes with Scotland, Bulgaria also has its version. Playing the Rhodope Mountains bagpipe (locally known as the Kaba Gaida), one of Bulgaria’s most powerful folk music instruments, is a prerequisite for Bulgarians.

The festival also attracts visitors from around the world, including places like the Netherlands, France, Hungary, Sweden, and even Japan. Over 100 bagpipers participated in the event, while visitor numbers exceeded 15,000.

Not a massive gathering in one particular spot but a tradition that takes place in villages and towns all over the country; Lazaruvane is celebrated on St. Lazarus Day, the Saturday eight days before Easter. This ancient Bulgarian tradition announces the beginning of spring.

What’s so remarkable about this event is that it’s performed only by girls. On St. Lazarus Day, groups of girls (usually about 16 years old and unmarried) walk across their town, dressed in traditional clothing, singing folk songs, and visiting every home in town. Symbolizing the girl’s growth, a girl is deemed ready to marry once this ritual has competed.

Date:  Eight days before Easter.
Location:  All over the country

Zheravna is a village in the southeast part of Bulgaria. Since 2008, the village has held the National Festival of Folk Costumes. Participation in the festival is voluntary, and those who want to join it must respect its rules.

The main rule is to be dressed in folk costumes. It is forbidden to use some objects from modern life. The use of a mobile phone is allowed only in the calling areas. These rules aim to strive to appreciate Bulgarians’ day-to-day life some 100-150 years ago.

Traditionally the festival is held for three days (Friday, Saturday, and Sunday) on the last weekend of August.

Bulgarian Festival #9: Carnival of Humour and Satire in Gabrovo

Known as Bulgaria’s capital of satire and humor, Gabrovo hosts the Carnival of Humour and Satire each year in mid-May. This is an incredibly fun festival, one of Bulgaria’s best festivals, especially if you like a good laugh.

Nothing is taken seriously during this carnival. Huge crowds fill the streets of Gabrovo, part of the procession that slowly runs through the city center. People are dressed up in all kinds of characters, from gypsies and musketeers to wizards and to toreadors. There are cartoons and sculptures of significant events, famous people, and local heroes. Additionally, traditional Balkan music and dances accompany this most fun of Bulgarian festivals. Make sure to check it out if you’re in the country in May.

One of Bulgaria’s most important cultural festivals is the Pirin Sings Folklore Festival. First organized in 1962, it is fascinating because it successfully tracked, revived, and protected Bulgaria’s cultural heritage. The festival attracts a lively bunch of performers, young and old, lovers of ancient traditions and ethnography, and tourists who want a glimpse of local Bulgarian culture.

The Pirin Sings festival occurs in the middle of summer at the Predel Pass in the Rila and Pirin Mountains. People from all fourteen villages in the region gather at the festival for a couple of days of songs, dances, tales and stories, music, and other folkloric fun.

In the middle of summer, the beautiful port area of Burgas transforms. It becomes the setting of a bustling festival of street food, culture, arts, music, and literature for five days. Mobile kitchens, street food trucks, and marquees will be set up, where chefs from Burgas and elsewhere in Bulgaria will cook the most delicious dishes.

This is one of the most exciting festivals in Bulgaria for foodies. Tasting and sampling events occur all over, while visitors looking for a hands-on experience can join workshops and watch culinary demonstrations. In addition to cold food and hot specialties, there’ll also be ice-cold beer and tasty cocktails.

The International Folklore Festival in Varna is a fantastic event for folkloric dancing and music. This festival doesn’t only focus on Bulgarian culture but features folk ensembles from all across the world.

Since its first edition in 1992, more than 150 different groups have participated, hailing from fewer than 50 other countries in Europe, Africa, Asia, and the Americas. Additionally, more than 60 folk ensembles from Bulgaria, both amateur and professional, have also performed at this vibrant festival.

The world comes together through video screenings, live performances, street processions, outdoor concerts, and creative meetings. The Varna International Folklore Festival occurs every year in the first week of August, attracting a massive crowd of 15,000 people.

This Bulgarian festival is not famous, but I wanted to include it because it’s my favorite one. The festival is held high in the mountain at the beautiful Stara Planina, specifically in the Ambaritsa hut. This festival is a three-day program with a lot of music, games, fun, and of course, as the name suggests, it involves blueberries. (and the mekitsi ever). I went to the festival last year as a volunteer for one week. I met a lot of awesome people and had a fabulous time.

A famous Bulgarian festival of dance and music, the Wake Up Open Air Festival is another favored festival of music in Bulgaria. Located near the Kuklen Monastery, less than 30 minutes from Plovdiv. Once there, you can partake in spiritual lectures, fire walking, and enjoy the music and dance performances.

These Bulgarian festivals are just one of the reasons to visit the country. Bulgaria is a fantastic place with so many places worth visiting. If you ask me when is the right time to visit Bulgaria, my answer would be NOW!

Are you going to consider joining one of these Bulgaria festivals? If so, which one will it be?