Arguably the most-visited city in Bosnia and Herzegovina, Mostar is filled to the brim with glorious attractions. The show’s undisputed star is the Stari Most, or Old Bridge in English, which indirectly gave the city its name. There are several beautiful old mosques, bustling Turkish bazaars, and a maze of cobbled alleyways. Mostar is basically as close to the Middle East as you can get in Europe.

However, that all being said, Mostar is also a superb base for excursions to the rest of the Herzegovina part of Bosnia and Herzegovina.

In fact, Mostar is the official capital and only major city in Herzegovina, the southern part of the country. So, to help you plan to complete the perfect Mostar experience, we’ve selected the very best day trips from Mostar below. 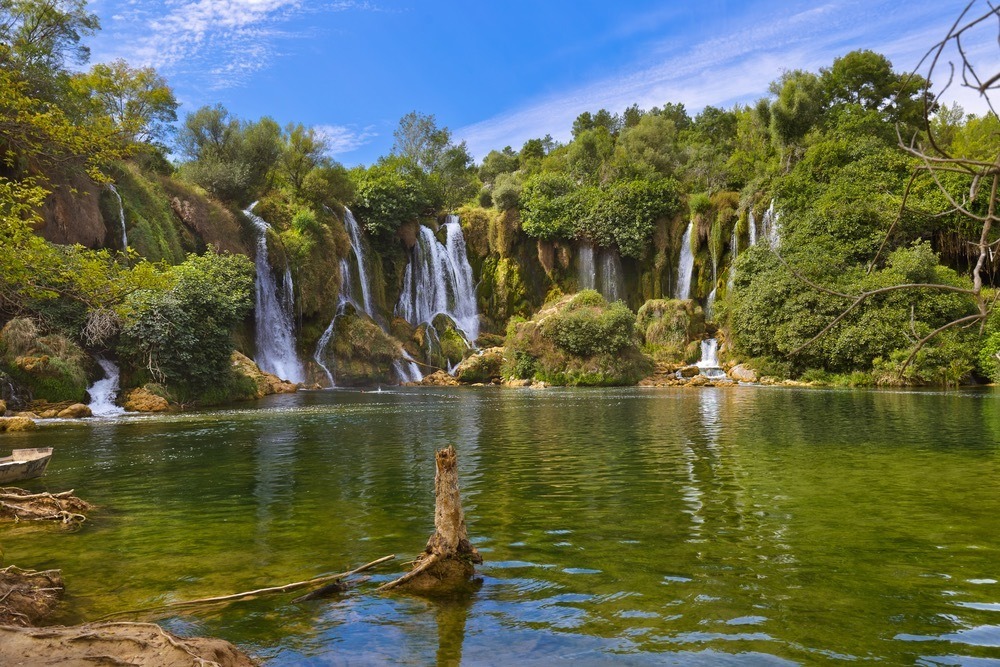 It is so magnificent that it could give Plitvice Lakes or the Krka waterfalls a run for their money. The Kravice Waterfall is a huge cascade on the Trebižat River in southern Bosnia-Herzegovina. The waterfall is about 25 meters high, an impressive series of adjacent cascades and falls.

This is a much-visited destination in summer because there’s impressive picnicking around and swimming in the large natural lake at the waterfall’s base.

It’s one of the most popular day trips from Mostar and Dubrovnik or even Split. There’s a small café and a campground, while the area is home to numerous restaurants that serve up some killer grilled fish dishes.

As a country home to barren karst mountains and other rocky scenery, as well as fast-flowing rivers, Bosnia and Herzegovina have their fair share of gorgeous waterfalls. The Kravice Waterfall might be the most famous, but there are more waterfalls near Mostar as well. While Kravice sits in a lush natural landscape, the Provalije Waterfall in Stolac is its urban counterpart.

In the heart of this small town 40 minutes southeast of Mostar, the Bregada River tumbles down a wide cliff, creating a series of photogenic waterfalls characteristic of this part of the Balkans. What makes this waterfall so picturesque is its setting against a backdrop of old orange-roofed and white-walled houses.

Sometimes called the “Pearl of Herzegovina,” the ancient village of Počitelj is a classic stopping point en route from Dubrovnik to Mostar. It lies just north of the border with Croatia, about a 30-minute drive south of Mostar.

Located on the left bank of the Neretva River—which, by the way, also flows through the heart of Mostar and right underneath the Stari Most—, Počitelj sits in a natural amphitheater and used to be a strategically important town. This is still evident because of the still-present fortified stone walls and a fortress. Other landmarks include an old mosque and a bell tower that offers astounding panoramic views.

This historic town thrived from the 16th to the 18th centuries. Its evolution happened over two distinct periods—the medieval and Ottoman periods. Currently, Počitelj is on the Tentative List of UNESCO, being considered for inclusion in the World Heritage Site list. 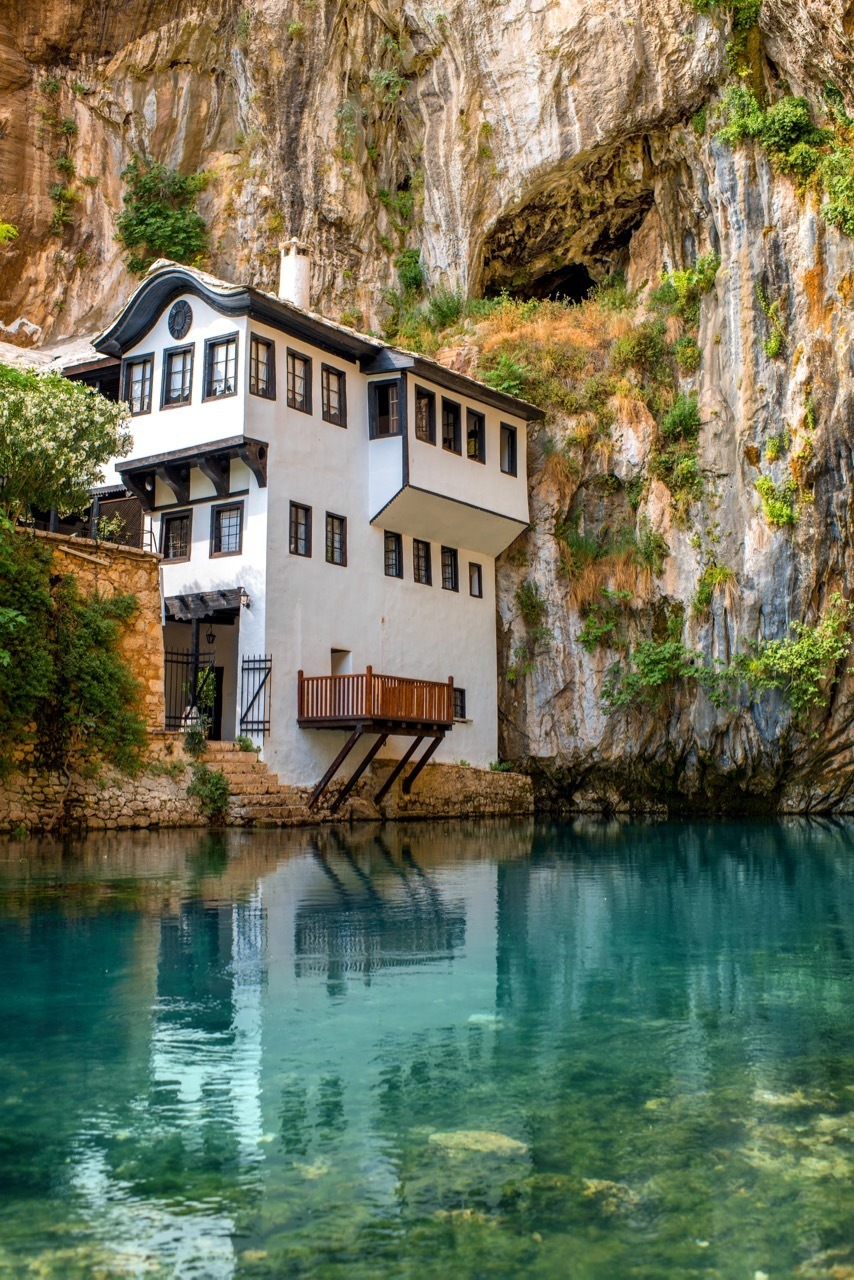 Only 15 minutes by car from Mostar lies the iconic Dervish monastery of Blagaj. This is another popular stop on bus trips from Dubrovnik to Mostar and makes for one of the best day trips from Mostar. Known locally as the Blagaj Tekija, it’s a striking collection of historic buildings and natural features at the Buna River spring. Not surprisingly, this is a national monument in Bosnia and Herzegovina.

People have built picturesque monasteries all over Europe, but this one is among the most beautiful. This 16th-century Ottoman-style Dervish monastery sits comfortably at the base of a huge rock wall while crystal-clear spring water calmly flows by. It’s as magical a place as you’ll find anywhere in the Balkans.

The UNESCO World Heritage Site, known as Stećci Medieval Tombstone Graveyards, encompasses 28 individual sites spread across the western Balkans. The vast majority of these sites are in Bosnia and Herzegovina.

If you’d like to visit this fascinating historic site on one of your Mostar day trips, your best option would be the stećak (plural: stećci) necropolis of Radimlja near Stolac. Most of these ancient tombstones date from the late-15th century through the 16th century. This ancient graveyard contains more than 130 stećci, laid out in rows and featuring wonderfully intricate carvings, inscriptions, and motifs.

While all of the above destinations for Mostar day trips are south of the city, there’s also one incredibly great destination to the north. About 1 hour and 20 minutes north of Mostar, you’ll find the superb Blidinje Nature Park, one of the top nature parks in Bosnia and Herzegovina.

Anyone looking to leave the city behind for a day should consider visiting this glorious mountainous region. Situated in the rugged Dinaric Alps’ very heart, Blidinje Nature Park is home to many beautiful natural attractions. You can visit Blidinje Lake, explore Grabovica Valley or hike the Vran and Čvrsnica mountains.

It’s an incredible place to go near Mostar all year round. Winter brings snow and great skiing and sledding, while summer is excellent for hiking. Additionally, you’ll also find the extensive necropolis of Dugo Polje in the valley. It’s one of many remains of historic human activity in the region. This is also part of the Stećci Medieval Tombstone Graveyards UNESCO World Heritage Site that we talked about above. 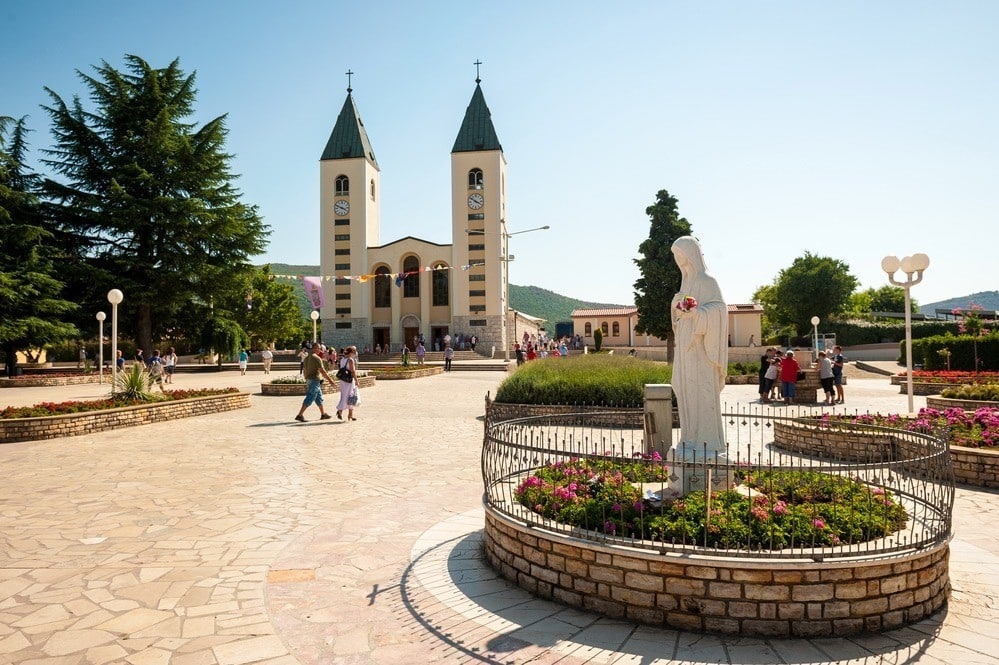 Also written as Međugorje, a name that means “between mountains,” Medjugorje is the number one Catholic pilgrimage destination in Bosnia and Herzegovina.

Previously a relatively poor wine-making town in the Herzegovina countryside, it has grown into a major religious destination since 1981. This was when the Virgin Mary allegedly appeared to six local kids. Some of those children, who still live there and are now adults, still claim to see Virgin Mary apparitions regularly.

Whether it’s a hoax or not—we wrote an entire blog post about this—the fact is that Medjugorje is now a major Catholic pilgrim’s destination. It’s one of the most popular in Europe. Even though the Roman Catholic Church has not acknowledged the apparitions (yet), over a million people travel to this small town each year.

If you’re staying in Mostar and would like to see what all the fuss is about, consider this as one of your day trips from Mostar options. It’s only about 35 minutes by car from the city.

Get Around With Ease

You can book buses, private transport, and ferries for your trip. Type in your two locations here: