Best Restaurants In Mostar (& Where To Have Coffee)

Home > Best Restaurants In Mostar (& Where To Have Coffee)

Best Restaurants In Mostar (& Where To Have Coffee)

Just like other Balkan countries like Croatia, Slovenia, Serbia and Macedonia, Bosnia and Herzegovina enjoys a rich and ancient culinary heritage. There are numerous typical dishes from Bosnia and Herzegovina, many of which you’ll find being served in the cozy cafés and charming restaurants in Mostar.

A variety of eateries, watering holes, coffee shops, and bakeries dot the city of Mostar, the largest city in the Herzegovina region and a major tourist destination. However, tourists—especially day trippers from places like Dubrovnik, Split or Sarajevo—will want to focus on the Mostar restaurants near the iconic Stari Most.

This is the heart of the Old Town of Mostar, a UNESCO World Heritage, where all the tourist action takes place. From beautiful architectural landmarks to busy bazaars, you’ll find plenty to see and do in this area. Additionally, this also has the largest concentration of restaurants in Mostar. Let’s check out some of the best ones!

After spending the entire day wandering through the Mostar Old Town streets, chances are your stomach will be growling. Here is a selection of the best places to eat in Mostar. Note that they’re all located just west of the Stari Most, in a part of the Old Town that’s absolutely filled with restaurants, hotels, and bars.

One of several great Mostar restaurants located on Onešćukova, a street directly west of the Stari Most mere steps from this famous bridge, Kaldrma is an excellent place for traditional Bosnian food.

A spacious terrace offers wonderful outdoor seating—people rave about the views of the Old Town. The menu features Bosnian dishes, but also other food from the Eastern and Central Europe. If you’ve always wanted to try cevapi, this would be a good place to do that.

You won’t find a restaurant in Mostar that’s closer to the Stari Most than Lagero Restaurant. It’s a stone’s throw away from the bridge—not even figuratively, but quite literally. You could throw a stone, and you’ll probably reach the bridge. Don’t do that, though!

The outdoor terrace is super-close to the Neretva River, and the view of the Stari Most is sensational. Other popular features of this restaurant are its great service and superb authentic Bosnian food.

Situated just across from the Crooked Bridge, the Stari Most’s less-famous little brother, Hindin Han is one of the most and best-rated restaurants in Mostar. It’s housed in a renovated family home, boasting a large outdoor seating area and traditional decorations.

Hindin Han is so popular because of its generous portions, low prices, amazing setting, and top-notch service. Just like most of the other restaurants in this area, it focuses on typical dishes from Bosnia and Herzegovina, ranging from fish and seafood to meat dishes, soups, and baklava.

When looking for the best Mostar restaurants online, Šadrvan never fails to show up on overviews. This is one of the best located restaurants in Mostar, mere minutes from the Stari Most. Previous guests praise the portion sizes as well as the affordability of the food and drinks.

Someone even said that it tastes like homemade Bosnian food, which is probably the greatest compliment a traditional restaurant can get. You’ll find all kinds of traditional dishes on the menu, including kebabs, mixed grill platters and an exceptionally wide range of vegetarian options. Also, they serve phenomenal Bosnian coffee.

Located on a small street off Onešćukova, Konoba Taurus is in a beautiful old stone building. It even has its very own stone bridge to hang out while enjoying a drink. It’s arguably one of the best restaurants in Mostar in terms of historic vibe and architectural beauty.

The Turkish-style interior features wooden benches and beams, a super-charming atmosphere to dine in. Its food, too, is great. On the menu, you’ll find many local dishes, from seafood platters to grilled meat.

Restaurant Harmonija lies just outside the dense cluster of Mostar restaurants west of the Old Bridge. It’s still well within the Old Town, though, and also a quick stroll from the bridge. Its two terraces provide awesome views of the Neretva River, a mosque, the old cobbled bazaar street known as Kujundžiluk and, of course, the bridge itself. In terms of food, you’ll find everything from pasta and salads to grilled meat, seafood and desserts on the menu.

There are plenty of typical dishes from Bosnia and Herzegovina, but also more international dishes. An extensive wine selection allows you to find to perfect pairing with your food.

This family-owned restaurant has been in business for more than 30 years, having helped shape the food scene in Mostar and still serving high-quality traditional dishes.

This “national restaurant” is all about the typical cuisine of Bosnia and Herzegovina. Its menu has all local classics, such as grilled food platters, for which it’s renowned around Mostar. Its décor is traditional, too, featuring rustic chairs, pillows, and wonderful patterns. It’s pretty cheap as well!

It might not always be easy for vegetarians to find a lot of options in the Balkans, but luckily in Mostar, there’s the Food House.

Quite possibly the best restaurant in Mostar for vegetarians, its menu adorned with delicious meat-free dishes like stuffed aubergine, japrak, grilled veggie platters, and dolma. 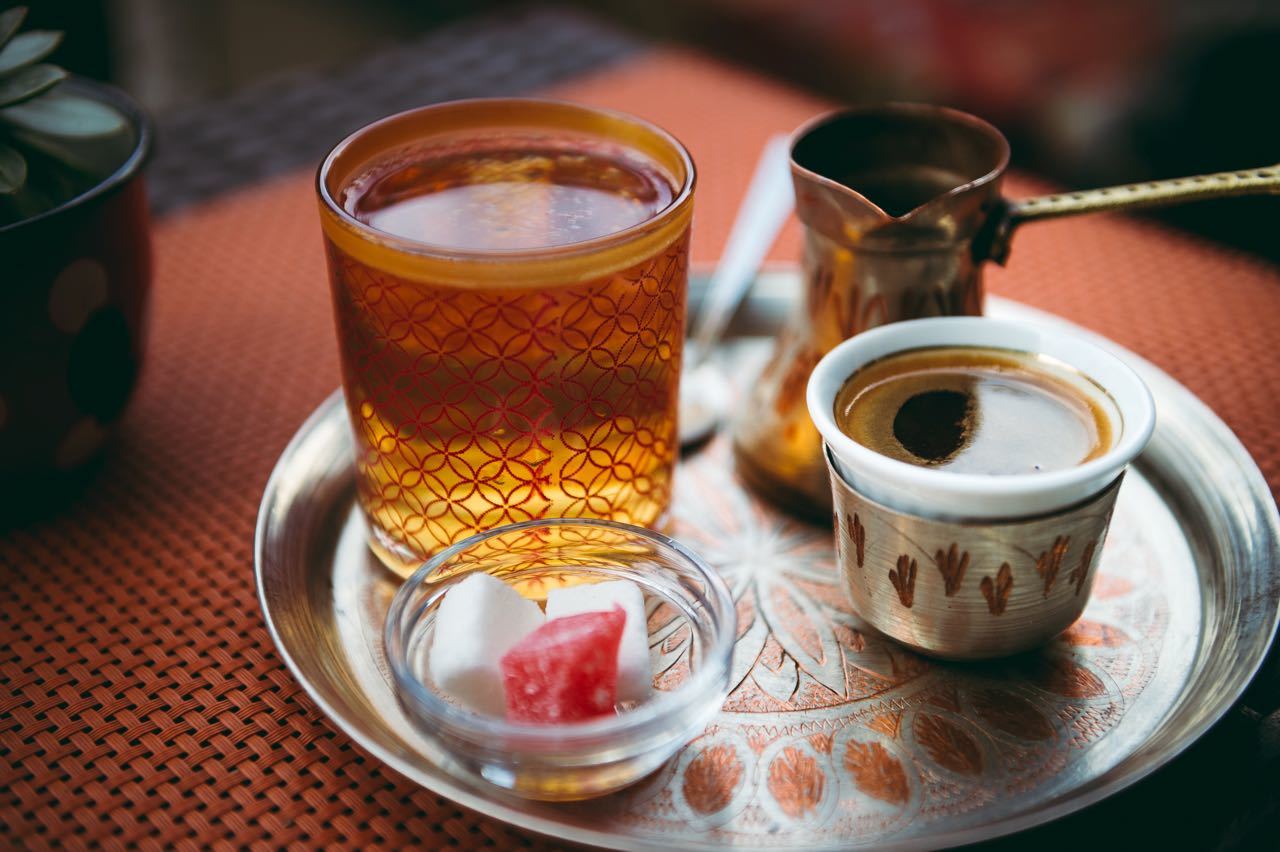 If you’re in dire need of a cup of coffee, looking for lunch spots in Mostar, or simply want a quick afternoon snack, these cafés in Mostar can satisfy your cravings.

According to online reviews, Café Roth is one of the best Mostar cafés. Not too crowded; it’s a fine spot for coffee or drinks. Previous visitors talk highly about the great and fast service, relaxed vibe and live music shows.

Located at the beginning of Onešćukova, an extension of the walkway across the Old Bridge, Café Marshall is housed in a striking stone building. Its terrace on the cobbled street makes for a great spot to take a break from playing tourist. Visitors appreciate the typically Yugoslavian charm of this place, as well as their coffee and cakes. It may be a bit old-fashioned, but that only adds to its authenticity. This is actually also a bar, one of the few spots in the Old Town that are open all-year and well into the night.

It’s easy to see why Café de Alma is considered one of the absolute best cafés in Mostar by visitors. Its location just off the Stari Most on the west bank of the Neretva River is unbeatable.

Café De Alma is also almost entirely focused on Bosnian coffee, making this one of the top places in Mostar to get your caffeine fix.

Located on Mostarskog bataljona, near the first bridge to the north of the Stari Most, Café Slasticarna Aldi 2 is part of a café chain in the city. This is the one with the best location.

It lies near the Old Town attractions and in an area dotted with other cafés. It’s a well-rated café in Mostar, famous for its huge selection of pastries, cakes, and other sweets. If you need to satisfy your sweet tooth, this is a fantastic option to have.

Café Vinyl lies across the street from the café mentioned above. Its fun outdoor seating area makes it a wonderful place just to chill out, relax before or after exploring the Mostar Old Town. They serve everything from coffee and iced tea to sangria.

Niđe Veze lies off of the Boulevard, a short walk from the Old Bridge, and is one of the best cafés in Mostar. Its large and colorful outdoor seating area makes for a fantastic spot to take a break from sightseeing in Mostar.

With its extensive all-day menu, it’s one of Mostar’s best breakfast places—their morning omelets are amazing. There’s also a wide range of pancakes, Belgian waffles, milkshakes, ice cream, smoothies and salads on offers. Beer and wine are available as well.

The little Stari Grad Café is so close to the Stari Most it’s almost on the bridge. It has to be one of the best places in Mostar to do some people-watching—everyone who walks across the Stari Most has to pass it. Their traditional Bosnian coffee is world-class, too, and the interior with its countless lamps and warm décor is extremely welcoming. 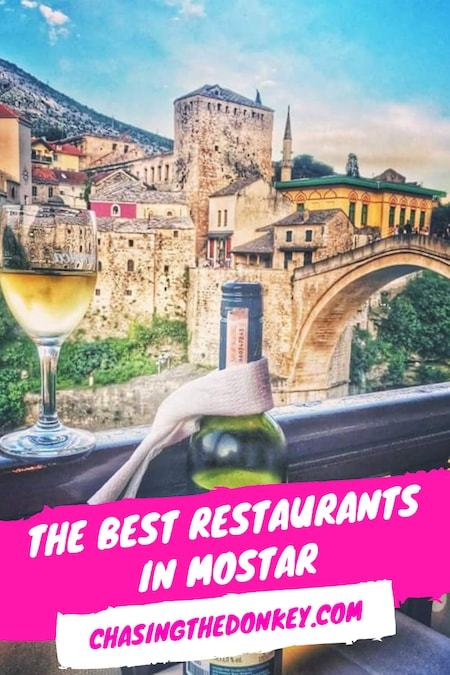