14 Must Try Bosnian Desserts To Eat

Bosnian desserts are an integral part of the country’s cuisine. You can find these tasty treats in bakeries, cafés, and in the homes of friendly Bosnians all over the country.

But beware, Bosnian desserts are not for the faint of heart; many are soaked in syrup and so sweet they’ll make your teeth hurt. Although, arguably, that’s part of their allure, as well!

Here’s an overview of some of the most popular desserts available for those looking to try some Bosnian desserts on their next visit. Dig in! Most of these are best enjoyed with a cup of coffee. 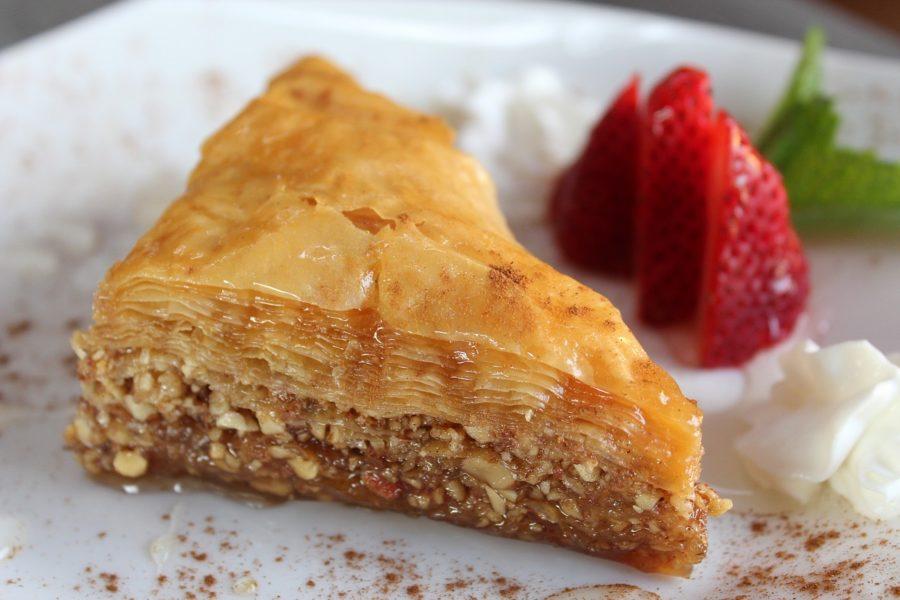 A highly popular Bosnian dessert, baklava, combines filo pastry layered with nuts and syrup, usually cut into a diamond shape. Baklava is dense and can be very sweet, so it is generally accompanied by a cup of black “khava” to balance things out.

Baklava can trace its origins to a similar dessert that the Romans had in the 2nd Century BC. There is debate as to whether it is originally a Greek or a Turkish dish, with both culinary histories building on the Byzantine – and, therefore, the Roman – Empires.

However, whatever its origin, there is a local Bosnian variation on baklava – Ružice (or “Rose Baklava”), made with a walnut and tirit filling. When finished, resemble the petals of a rosebud.

These delicious little date-shaped biscuits are named from the “hurma” shaped pan in which they are traditionally made. After baking the dough, the biscuits are doused in Agda, a lemon-flavored sugar syrup. They can be served either as coffee cakes or as a Bosnian dessert in their own right.

Bosanske hurmašice can often be seen during important religious holidays, such as Ramadan Bayram, where they are most welcome after a trying month of fasting. However, they are not strictly tied to such festivals and can be thankfully be made freely throughout the year.

Uštipci are fried dough balls that can be both sweet or savory and are popular throughout the Balkans. In Bosnia, they are predominantly a savory snack served alongside meat dishes or with a creamy spread. However, it is not uncommon to find sweet ones in Bosnia, either.

Sweet uštipci are sprinkled with powdered sugar and typically served with honey or jam. The sweet ones are particularly popular at Christmas time. They should be crispy and are therefore better served hot. If left out too long, they sometimes get rubbery.

Even more, debated than Tufahija is the correct way to make and serve an uštipci. You’re unlikely ever to have them the same way twice!

These super-sweet nests of elaborately woven sugar are traditionally made in wintertime. To make them, flour has to be baked dry and left to cool overnight, and then sugar is mixed with water and lemon juice and left in the snow to cool. After that, the two are painstakingly mixed by hand by 5-6 people or more! Ćetenija takes a lot of work, but the results speak for themselves.

Sadly, the tradition is rapidly disappearing. But if you manage to get your hands on some (or help bring it back by making some yourself), you can be sure that they’ll melt in your mouth!

There are different variations of Gurabija across the Balkans, with each country giving its recipe a distinct twist. These flat, round shortbread cookies in Bosnia are often flavored with lemon zest, vanilla, dried fruits, and nuts, then decorated using a fork or a knife. But the authentic Bosnian twist is that each cookie has a sugar cube pressed into its center before baking.

America may be famous for its apple pie, but the Bosnian dessert Jabukovača is even more sumptuous. These sweet, syrupy pastrBosnia’smade with filo dough, but they are stuffed with chopped apples, vanilla, and walnuts this time. Jabukovača originated in Bosnia’s capital city of Sarajevo and is relatively similar to baklava.

For an extra layer of decadence, Jabukovača is served in slices doused in sherbet made from sugar (naturally), honey, and lemon juice. Delicious! 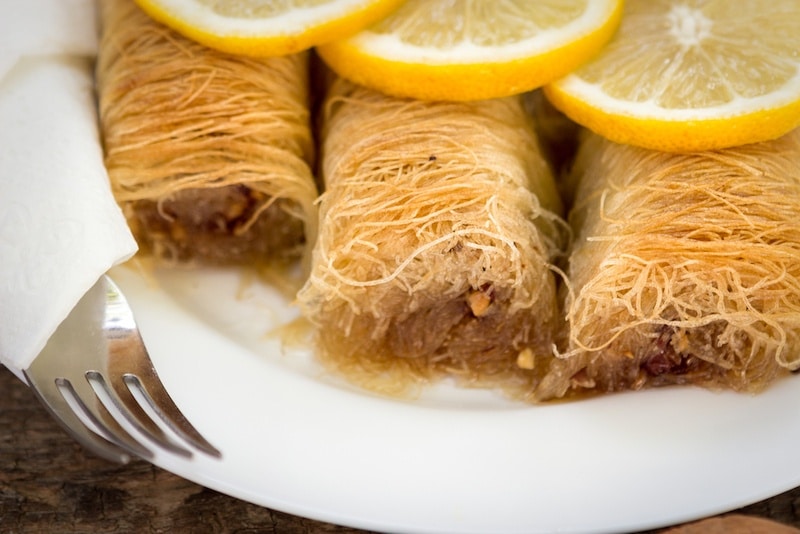 Kadaif is a delicious layered dessert somewhat similar to baklava. Both the top and bottom consist of buttery kadayıf dough that is sandwiched around a nutty filling.

Like many Bosnian desserts, kadaif has its origins in Turkish cuisine. However, variants of kadaif can be found all across the Mediterranean and the Middle East, each with its own twist on the dessert.

Some family recipes may opt for a different nut, but you’re unlikely to find it in stores or bakeries. In Bosnia, kadaif is made with shredded kadayıf dough (pre-shredded filo pastry dough) coated with butter and filled with walnuts. While walnuts are almost always used inside, your kadaif is also topped with pistachios, which is not common in Bosnia.

Once the dessert is baked, Kadaif is coated in lemon-flavored syrup, often infused with spices – typically cinnamon or clove.

However, two things that make the orašnica stand out from any other walnut cookie is its unique shape. First, it is always formed into a horseshoe or crescent shape.

Second, the dessert is made so that the walnuts are extra crunchy. This is done by using chopped walnuts rather than finely ground ones. Additionally, the walnuts are added after the rest of the batter is whisked together.

Light, fluffy, and devilishly sweet, šampita is a favorite throughout the Balkan region. This dessert was created to be easy to whip up quickly and with only easily accessible essentials.

Šampita is made with a simple puff pastry base in most bakeries, then topped with whipped meringue. However, if you’re lucky enough to be invited over for Bosnian dessert and someone’s house, the šampita will you’re be made with sugary lemon syrup.

Unlike many of the desserts listed, which have Greek or Turkish roots, or debatably come from any region in former Yugoslavia, smokvara is almost certainly from Bosnia and Hercegovina.

Smokvara celebrates the fig, a tree commonly found in Bosnia. Smokvara dough is made from fig pekmez (a thick syrup), wheat, sugar, oil, cornflour, and water. This dough is molded into a round, flat disk before being baked. Once baked, the smokvara is drowned in a thick syrup layer (made of pekmez, sugar, and water).

If you’re craving rice pudding, look no further. This tasty Bosnian dessert shares its past with sülac, which translates literally as ‘milky food.’ Sülac was popular amongst nobles throughout the Ottoman Empire and was brought to Bosnia-Herzegovina.

Sutlijaš is a creamy rice pudding made from rice, milk, and sugar. Sutlijaš varies from its predecessor because it is typically made with vanilla essence rather than rose water since this was impossible to obtain for the average person under Ottoman rule.

The dessert is typically sprinkled with cinnamon or grated chocolate to add the finishing touches. 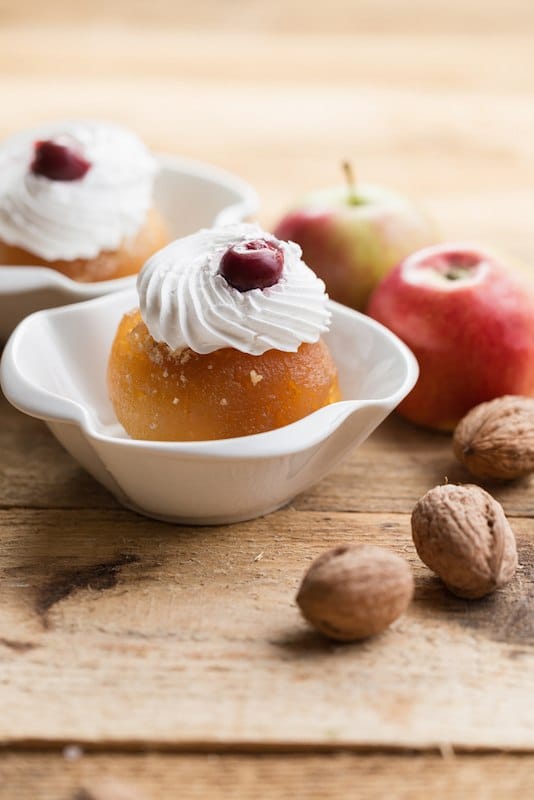 This is one of the most ubiquitous Bosnian desserts available and an absolute must-try!

Tufahija is made from hollowed-out apples stewed in sugar and water. The apples are then stuffed with walnuts (or sometimes almonds) and baked in sugar syrup. Before serving, the apple is topped with whipped cream and a cherry.

As is typical with any dish the world over, every family has its own treasured recipe. But the correct way to make Tufahija seems to make it one of the most contested desserts in Bosnia! Some people swear by sour apples, others overripe ones; some families prefer a more creamy filling, while others enjoy a bit of crunch. 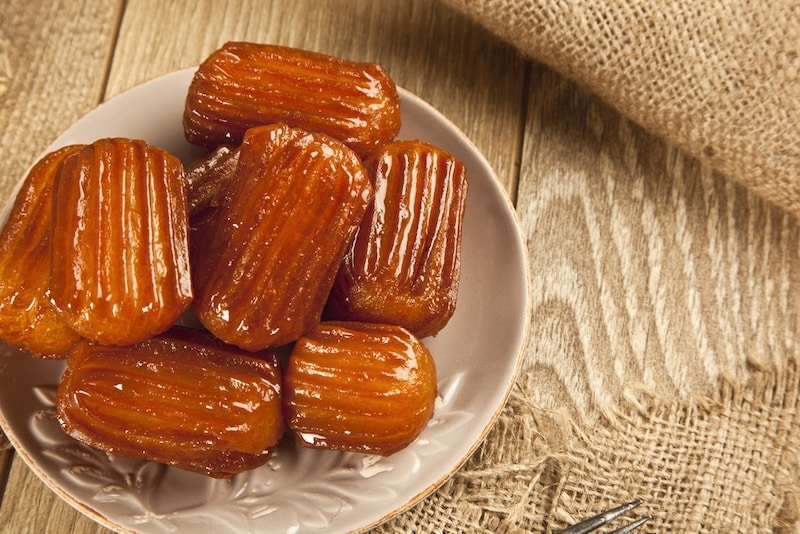 You wouldn’t be entirely wrong if you think tulumba looks like mini, syrupy churros. Like churros, tulumba is popular street food and is best enjoyed hot you’re more likely to find tulumbas at a café in Bosnia.

These crispy doughy treats are deep-fried and dipped in lemon syrup. They have a distinct shape formed with a star-shaped nozzle that the dough is fed through before being fried.

Traditionally tulumba were explicitly made for the Muslim holiday of Iftar, which follows the month-long fasting period of Ramadan. But nowadays, you can get tulumba year-round throughout Bosnia.

Coconut lovers will be in heaven after their first bite into a ruske kape. Best served chilled, the ruske kape is made with typical baking ingredients (flour, baking powder, sugar, and eggs), then filled with chocolate or vanilla custard (or both!)

The dessert is then smothered in chocolate, and the sides are rolled in shaved desiccated coconut.