Rent A Car Bosnia & Herzegovina (Plus Tip For Driving In Bosnia)

Want To Rent A Car in Bosnia & Herzegovina? Driving In Bosnia Guide

If you want to explore a country truly, there is no better way to do it on your way than hire a car. It’s always worthwhile researching the driving rules of that particular country before your trip, so you don’t run into trouble.

If you’re considering visiting Bosnia & Herzegovina, you have plenty of destination options. Because distances can be significant and many off-the-beaten-track destinations aren’t always well-served by public transport, hiring a car in Bosnia is a beautiful way to see the passing landscapes. This way, you can explore at your own pace and won’t be rushed or feel pressured to leave at a particular time.

Many people begin their country tour in the capital, Sarajevo, and there are ample historical places to check out here. In addition to that city, there are many other places of interest, including Jajce with its huge famous waterfall, Mostar and its symbolic bridge, Teslic and its huge spa resort, and Bihac, the border town known for its stunning natural landscapes, and Una National Park.

Put simply, hiring a car and heading off on a road trip around Bosnia & Herzegovina is a beautiful experience.

Let’s now move on to the essential tips for driving in Bosnia-Herzegovina and what to know when renting a car in Bosnia.

Suppose you hire a car outside of the country, for example, when driving a rental car from Slovenia to Bosnia-Herzegovina, or you’re using your own vehicle. In that case, your regular driving license is enough. If you have hired a car in Bosnia and Herzegovina, you will need an International Driving Permit to go alongside your regular license document and passport. This should be kept with you at all times.

If you are crossing borders, make sure you have the vehicle registration and rental papers with you and the insurance documents, as the customs guards will undoubtedly want to see them.

From 15 November to 15 April, you are legally required to use winter equipment, and that means all tires must be MS, M+S, or M&S mark with a 4 mm tread at least. Check this when you are hiring your car.

You should also have snow chains in the car because they are required in ice and snow if you see the sign on the road telling you to use them. Additionally, it is also mandatory for drivers to remove all ice and snow from their vehicles before entering the street.

Even during the daytime, you should have your headlights dipped.

Many roads don’t have the best lighting, so drive a little slower and take extra care, especially in a rural area. 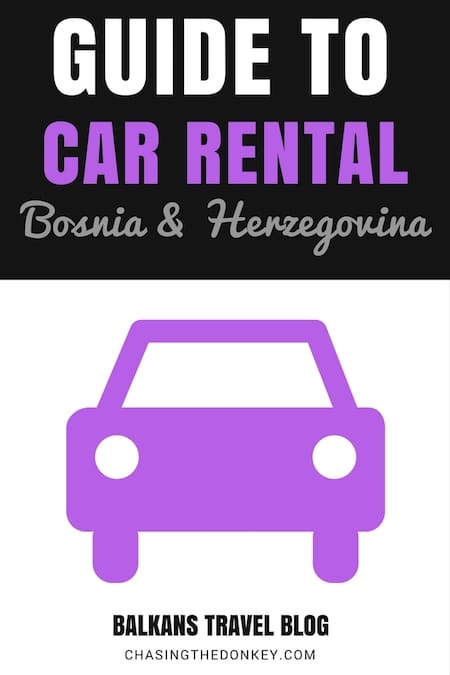 Car Hire Bosnia & Herzegovina Tip 8 – When Driving Uphill, You Have Right Of Way

The country has many large hills and mountains, and if you are venturing uphill, you have the right of way over any oncoming traffic.

The limit for drunk driving is much lower in this country than in some others, at 50 mg of alcohol per 100 ml of blood. For that reason, avoid drinking completely when you are planning on driving. If you have anyone in the car who has been drinking, they must sit in the back.

Be aware of this before you go!

If you are venturing off the beaten track with your Bosnia-Herzegovina car hire, the advice is to be careful of the potential for an unexploded landmine. The country has a rather turbulent past. While the clean-up operation has been successfully going on for a while now, there is the potential for the odd unexploded device, mainly at the sides of the roads in rural areas.

Check The Price For a Car Rental on Bosnia Here

There are no motorways in Bosnia and Herzegovina, so you’ll likely drive on standard single-track roads, i.e., one lane in each direction.

This may mean that you might run into traffic around certain areas, but try and put the temptation to overtake on double lines aside. Any road can lead to a winding road and oncoming traffic without warning. Remember, you’re driving a rental car in Bosnia-Herzegovina, and you don’t want to be responsible for an accident with one of those!

Instead, take your time and enjoy the scenery.

A motorway is being built just outside the capital, Sarajevo, but the rest of the country lacks faster roads.

Driving In Bosnia And Herzegovina – Be Terrain-Aware

Remember that Bosnia & Herzegovina may be less developed than you might expect, which means that some roads may be less in quality than you are used to.

This is expected to happen when you leave the big towns and cities and head into rural areas. It can sometimes feel like you’re off-roading, so be careful and take extra time.

Driving In Bosnia And Herzegovina – Drive Carefully Through Tunnels

You will find that many roads do not lead around or up and down mountains. Instead, they run straight through them in the form of a tunnel. While this is a much quicker option, be aware that many of these tunnels don’t have fantastic lighting and can be dusty.

Driving In Bosnia And Herzegovina – A Lack Of Fuel Stations

Outside the major towns and cities, you won’t find many fuel stations to fill your car, so whenever you see a station, fill up to be on the safe side.

There are great distances involved in traveling across this country, and being without fuel in the middle of a rural area is not a good situation.

We mentioned the possibility of unexploded landmines in rural areas, but you should also be very aware of wandering livestock, e.g., cows. They can come out of nowhere and block the road, causing a significant hazard.

If you’re driving around corners, go slowly for this very reason. There aren’t many fences to keep wildlife in fields, so you may find them wandering all over the place!

Driving In Bosnia And Herzegovina – Wear Your Seat Belt

Everyone in the vehicle must wear a seat belt, including children.

Is Driving In Bosnia And Herzegovina Safe?

It is just as safe to drive in Bosnia & Herzegovina as in any other country, provided you heed the advice and ensure that you follow the rules. This is a large and beautiful area, and countless people take road trips around the Balkans, passing through Bosnia & Herzegovina every year.

Although this shouldn’t put you off, the most significant danger is in the rural areas, as these are some beautiful, jaw-dropping regions to explore.

The danger comes from unexploded landmines, so be aware and stay on marked roads, avoiding off-roading and wandering away from your car. There is also the possibility that abandoned buildings may contain unexploded mines.

Road tripping through the Balkans is not difficult, thanks to easy border crossings, high-quality routes, and numerous locations where you can find cheap car rentals in Bosnia-Herzegovina. We have mentioned that the rural roads and the roads outside major towns and cities in Bosnia-Herzegovina could be better, but the scenery makes up for it!

Many people choose to venture from Dubrovnik and into Bosnia, possibly to Sarajevo or Mostar, but what about staying within the country’s borders and checking out what this culturally rich country has to offer alone?

Here are three suggestions to check out and possibly try during your visit.

This road trip will show you the best of the country and allow you to see some stunning sights along the way. You can book accommodation as you move through the country and find this relatively cheap.

You will begin your journey in Jajce. From there, you will move to Pliva Lakes, Travnik, stop off in Sarajevo for a short while, before continuing to Mostar, Pocitelj, Hutovo, and finally ending your journey in the coastal town of Neum.

Perhaps one of the best-traveled routes through Bosnia is from the capital, Sarajevo, to the historic town of Mostar and its landmark bridge.

The journey will take you just short of two hours; however, the actual time depends on traffic due to those single-lane roads for most of the way.

You will pass by Konjic and Jablanica if you want to stop off for a little extra sightseeing.

The border town of Trebinje is around two hours south of Mostar, and you can quickly drive that distance in just over two hours, depending upon traffic.

You will pass by the towns of Blagaj and Ljubinje for a stop off if you want to see some authentic life.