Home > 15 Macedonia Winter Destinations You Absolutely Have To Visit

Even though Macedonia gets the most tourists during summer and spring, this country has many underrated winter destinations. 85% of Macedonia’s territory is covered in mountains, making Macedonia the second most mountainous country in Europe, only falling behind Montenegro (89% of its territory).

Hence, it’s needless to say that Macedonia has a lot of potential when it comes to winter tourism, and even though most of these places have only modest tourist facilities (for now), there are a lot of beautiful places you should visit in Macedonia during winter, and in this article, we’ll show you the best of them.

Skopje is the first and last stop for most people visiting Macedonia. Even though most people will tell you Skopje is prettiest during spring or autumn, winters in the capital can also be quite picturesque.

The Vodno Mountain and the Matka Canyon are usually covered in snow and look even more majestic in the winter. Sure, the traffic in Skopje during winter is horrible, and the city has a huge air pollution problem during this time of the year, but no one can deny that Skopje looks beautiful in its winter clothes.

Spreading over almost 200,000 acres, Mavrovo is the largest national park in the country. Some of the park’s highlights include the most famous ski resort in Macedonia, the picturesque Mavrovo Lake, the Sunken Church, which is underwater throughout most of the year, and of course, the diverse wildlife, which is the main reason why Mavrovo has a status of protected National Park.

While in Mavrovo, you can also visit Galicnik, one of the most picturesque villages in Macedonia, connected to Mavrovo via arguably the most scenic road in Macedonia.

Shara, The Mountain Of Ice Lakes, And Popova Sapka

The tallest mountain top is Titov Vrv (Tito’s mountaintop, named after Josip Broz Tito) at 2,748 meters above sea level, but the most popular place is Popova’s ski resort Sapka (meaning the Priest’s Hat).

Recently, there have also been initiatives about turning Shar Mountain into a national park because you can find over 100 species, including the endangered Balkan Lynx.

This small town in Western Macedonia is famous for its thermal-mineral water sources in the villages of Kosovrasti and Banjishte. Several thermal baths were built around these sources in the 1940s, and during the golden ages of Yugoslavia, Debar was one of the most famous spa resorts in the whole country.

It was only open to politicians, army generals, and other essential people for some time. Research conducted in the 1970s also showed that the mineral water sources near Debar contain 4 grams of minerals per liter, which remains unmatched by any other thermo-mineral spring in Europe.

This, combined with the charming winter atmosphere in Debar (one of the most remote towns in Macedonia), will surely give you everything you might expect from a winter vacation.

Lazaropole is one of Macedonia’s best-kept secrets that most tourists don’t know about. The village lies off the beaten track, there aren’t any direct buses, and there aren’t many tourist facilities, but it’s the perfect getaway spot where one can reconnect with nature.

With its lush vegetation and stunning landscapes, Lazaropole is beautiful throughout the year, but the winters in this mountain village are nothing short of spectacular. If you’re one of those people who like walking on snow that nobody else has walked on and taking long walks in the forest during winter, you’ll love this place.

Ohrid And The Oldest Lake In Europe

Even though Ohrid gets most of its visitors during summers and many people think it’s a summer-only destination, there’s something special about winters in Ohrid.

It’s refreshing to see this city under a constant tourist siege during summers in a much more peaceful mood during the winter, and you can take your pick of authentic restaurants without needing to wait. More often than not, winters bring a decent amount of snow in Ohrid, giving the city an idyllic appearance.

When Ohrid gets covered in snow, climb to the top of Samuil’s Fortress and prepare for some of the most stunning views you’ve ever seen. While you’re in Ohrid, also visit…

Galicica, The Most Amazing Views In Macedonia

Galicica is the smallest national park in Macedonia and home to one of the country’s most spectacular hiking trails. Even though small, the park has the largest Balkan Lynx population in the region; according to estimates, around 40 lynxes (and a small population of bears and wolves) call Galicica home.

Most people’s favorite part of Galicica is the trail leading to Magaro Peak (2,255 m). On several spots on this trail, you can see a beautiful view of Ohrid Lake on your right and Prespa Lake on your left.

Many people who hike this trail claim this is the most beautiful view in Macedonia. This view is even more jaw-dropping during the winters because everything around the lakes is covered in snow. ManywoTalking about national parks…

We can’t talk about winters in Macedonia without at least mentioning Pelister- the oldest national park in the country. Located next to the second-largest city in the country, Bitola, Pelister is famous for its diverse flora and fauna, most notably the five-leafed Molika pine tree, eagles, deer, and wolves.

Pelister also has one of the best-equipped Macedonia ski centers and many hiking trails. However, the most beautiful part of the park is hidden at its most inaccessible point- the Peak Pelister (2,601 meters), which hides two spectacular glacial lakes known among locals as “the Eyes of Pelister.”

Many people visiting Macedonia visit Ohrid and the Ohrid Lake, but most don’t even know about Lake Prespa, only one hour away. Lake Prespa has some lovely beaches in Pretor, Krani, Otesevo, and Stenje, but it doesn’t get nearly as much attention as it should.

During the second part of the 20th century, Prespa was one of the most popular vacation camps for students from around Yugoslavia. Still, after the fall of socialism, most of its facilities remained underutilized, despite the region’s natural beauty, and Prespa is home to 62 protected species.

Even in the summer, you’ll find many empty hotels and other facilities, while most coastal towns look abandoned in the winter. The lake is 855 meters above sea level, and the area gets a lot of snow yearly, giving the site some spectacular landscapes.

If you’re looking for some pristine winter photo spots, the Prespa region is as good as it gets.

Solunska Glava is one of the highest mountain peaks in Macedonia (2,526 meters). It’s one of the most challenging peaks, so unless you’re an experienced hiker, I wouldn’t recommend climbing Solunska Glava, especially not during winter, because this is one of the wildest and most remote parts of the country.

Also, landslides, avalanches, and frequent patches of ice are expected during winters. However, if you still want to visit without trekking, you can rent a car but make sure you are (or you hire) an experienced driver because this is one of the most dangerous roads in Europe.

It’s a challenging ride, but the views are rewarding, to say the least.

Krusevo, The Highest-Elevated City On The Balkan Peninsula 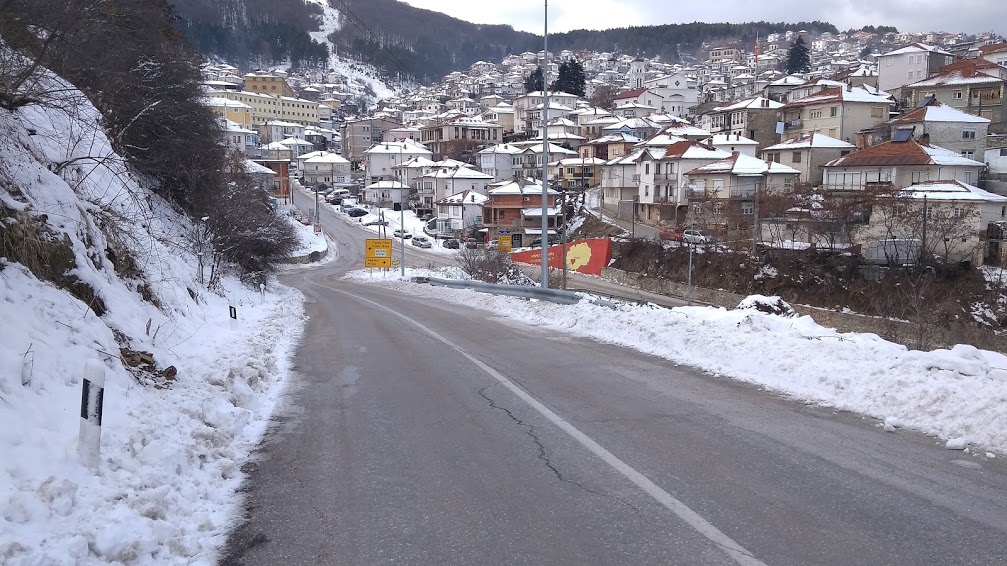 Rising above 1,350 meters, Krusevo is the highest-elevated city on the Balkan Peninsula and the second-highest city in Europe after Davos (Switzerland).

The city has a small, modest ski center and many great paragliding spots, but Krusevo is much more than just a winter tourism hub.

Krusevo is an important historic city that was the stronghold of the first Macedonian Republic (known as the Krusevo Republic). Macedonians first gained independence from the Ottoman Empire in 1903 (even though only for a short period). 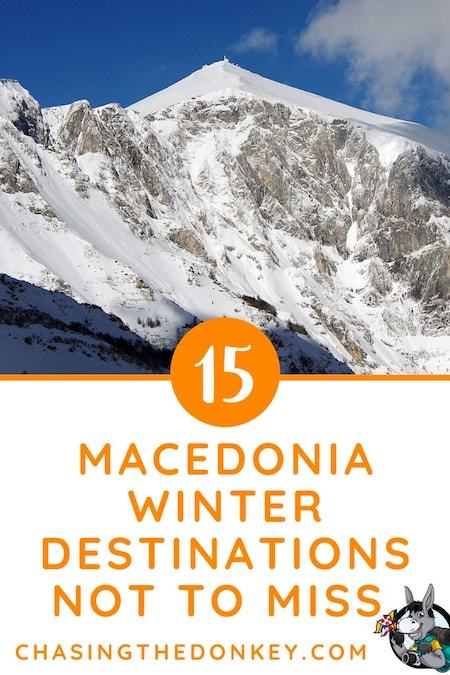 If you’re looking for an adventurous trek, it doesn’t get better than the scenic trail in Southeast Macedonia, leading to the highest falls in Macedonia- Smolari Falls (38 meters). The course takes hikers on a challenging walk through unpaved, rocky roads and more than 300 stone steps. Needless to say, this is a challenging trek, especially in the winter, because it gets pretty slippery.

However, suppose you don’t think you’re fit enough or don’t want to risk walking on such a slippery trail. In that case, you can always head to Kolesino Falls, another beautiful waterfall near Smolari.

Ruen (2,252 meters) is one of the highest peaks in the eastern part of Macedonia. The trail leading to the peak has no tourist facilities, and very few people trek to the top, making it a perfect off-the-beaten-track destination.

Seeing the beautiful, pristine snowy mountains, knowing that there isn’t another person near you, is a fantastic feeling, but that isn’t the best part. The peak is located at the border between Macedonia and Bulgaria, and once up there, you can technically have both of your feet in a different country.

Berovo, The Sunniest City On The Balkan

Tucked away in the Malesevo Mountains,  Berovo is a small mountain town with the “freshest air in Macedonia,” according to locals. Berovo is also the sunniest town in Macedonia, with an average of 6.4 sunny hours per day.

Over the last few years, Berovo has slowly become one of Macedonia’s best winter destinations for locals and tourists alike. Unlike some other places on this list, Berovo doesn’t have a ski center, but it has a beautiful small lake that gives the town a little charm and many forest walking routes for people who enjoy long winter walks.

Hidden in the thick forests of the Osogovo Mountains in the Eastern part of Macedonia, Ponikva is one of the fastest emerging winter resorts in the country.

Even though it can’t compare to Mavrovo, Pelister, or Popova Sapka, Ponikva is a great winter destination for people that want to get off the beaten track. The ski center isn’t as equipped as some of the ones mentioned above, but it also gets fewer visitors. Additionally, Ponikva is a great starting point for hiking…

Don’t forget to pick up a few Macedonian phrases with our language guide.

Have you ever visited Macedonia? What are some of your favorite winter destinations or places you want to see first? Let us know in the comments!

MORE WAYS TO ENJOY WINTER IN THE BALKANS
Share