Tipping In Serbia: How To Tip In Serbia

Home > Tipping In Serbia: How To Tip In Serbia

Tipping In Serbia: How To Tip In Serbia

One of the Balkans’ largest countries, Serbia, is the only European country that uses Latin and Cyrillic alphabets. Its capital city of Belgrade is one of southeastern Europe’s largest and oldest cities, home to striking Communist-era buildings and Belgrade Fortress, to name a couple of highlights. Belgrade’s Stari Grad is where you’ll find mansions dating from the 1800s and the iconic National Theater.

Outside the capital, numerous historic towns and archaeological sites dot the countryside made up of mountain ranges, plateaus, and rivers. While there’s a wealth of culture and history to be soaked up in Serbia, people who like being outdoors won’t be disappointed.

Absolute highlights include Fruška Gora National Park, the stunning Drina River, the Nikola Tesla Museum, the Stari Ras and Sopoćani complex, Derdap National Park, Belgrade Fortress, and the Studenica Monastery. Besides these, there are many other nature parks, ancient monasteries, fortresses, and old towns to visit and explore.

Other currencies accepted: It’s always a great idea to be aware of tensions between neighboring countries. If you’re traveling to Serbia, remember that bordering Kosovo is not on the same currency. If you attempt to use Euros in Serbia, you may offend, but you’ll undoubtedly get an abysmal exchange rate if nothing else. If you’re visiting the border area with Kosovo, you can change your Euros there. 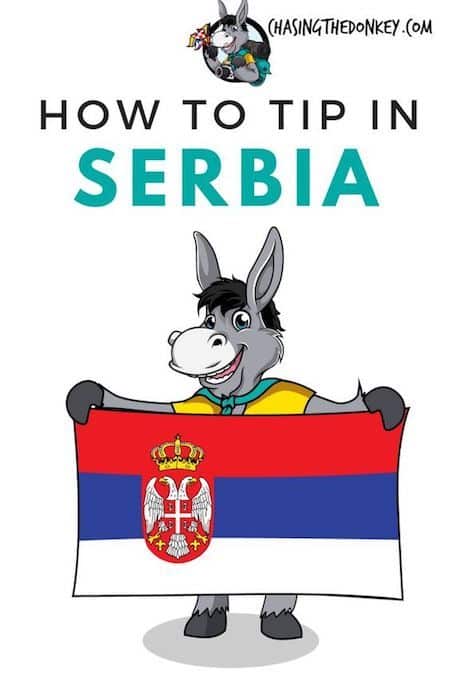 How To Tip In Serbia

Serbia’s tipping culture has only just arrived, and as a result, you’ll only really notice it in the major towns and Belgrade itself. You won’t usually see service charges on your final bill, so it’s up to you how much you want to tip in bars and restaurants, if you’re going to tip at all. If you felt the service was of a high standard, you’re free to tip anywhere between 10-20% of your final bill in cash, but feel free not to do so if you didn’t enjoy the time you spent there. You could also round up your account if you are in a smaller cafe or eatery. You won’t be able to add a tip to your credit card, so be sure to have small bills on hand to ensure you can tip accordingly. Tipping will help the next time you visit the restaurant, as the staff will remember it.

You should be aware that if a band of musicians visits your table and you show enjoyment of their performance, they will hang around a little and see if a tip is forthcoming. It can be awkward if you’re unaware of it, so in this case, give them a small tip, however much you want to offer, and they will be grateful. They will then leave you alone!

Tour guides aren’t typically subject to tips, but it’s personal discretion if you want to do so. The same goes for taxi drivers, but if you feel you want to give a tip, it’s enough to round up the fare to the nearest 100.

If you’re staying in a hotel and receive top service from porters and cleaning staff, you should consider around 100-500 RSD for every bag you have for porters and a tip for the cleaning team. However, don’t feel you necessarily need to do this if you didn’t think the service was up to much.