Where To Stay In Moscow – Best Hotels In Moscow Included!

Home > Where To Stay In Moscow – Best Hotels In Moscow Included!

Where To Stay In Moscow (Best Hotels In Moscow Included!)

Russia’s sprawling capital, one of the must-visit cities in the country, has long been known as an expensive city for hotel rates. While the situation has improved significantly over the past several years, the authorities are still adding accommodation in Moscow options to suit every taste and budget.

Moscow is rapidly becoming a city that caters to a well-heeled clientele and travelers on a tight budget. After several trips to Moscow, I’ve noticed that many people tend to stay near the Kremlin. It is definitely convenient but adds up quickly. In this post, I’ll try to answer the question ‘where is the best place to stay in Moscow?’ as best as I can!

This hotel is a short walk from Baumanskaya metro station, the Epiphany Cathedral at Yelokhovo, and the Yauza River. This quiet and small hotel has free WiFi, and it didn’t feel like staying in a branded hotel (Accorhotels).

The interior is done up in a modern style, while the rooms are equipped with plentiful amenities. The hotel restaurant offers a delicious variety of international cuisine. Additionally, there is a wide variety of dining establishments in the area nearby.

The staff is friendly and fluent in English (unlike many other hotels in Moscow). All public areas in the hotel were designed to provide effective wide-spectrum air cleaning, so lung disorder sufferers are sure to breathe easily here. Complimentary bottled water in rooms is likewise provided for those staying at this hotel, which is one of the best places to stay in Moscow, Russia’s capital for couples and families.

This small but lovely hotel occupies an attic in a building with oddly shaped rooms. Located some 12 minutes’ walk from the Red Square and just 7 minutes from the Kitai-Gorod metro station, Pokrovka 6 Hotel has its clean and up-to-date rooms decorated in light and bright colors. Chistoprudny Boulevard and the area around it are filled with several excellent restaurants, so make sure to visit some of them. 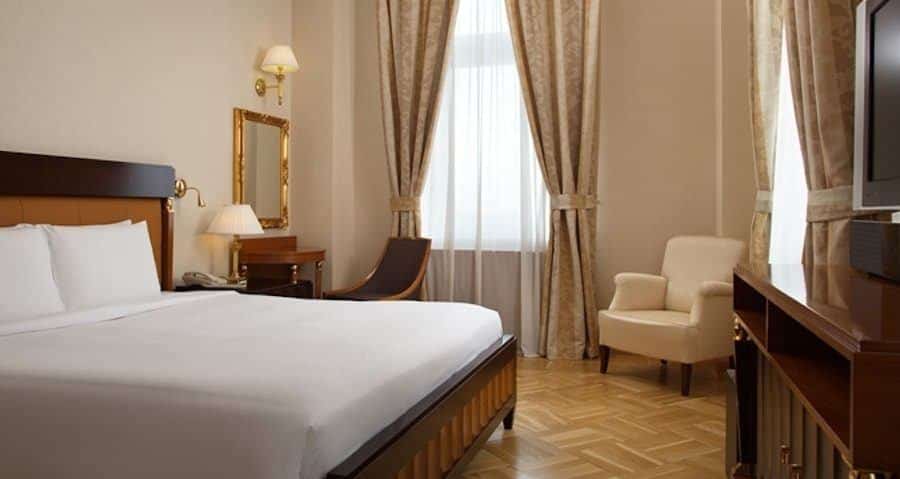 This typical Hilton hotel is situated in one of Stalin’s Seven Sister skyscrapers and has everything you need for a comfortable stay. Although it is close to the busy Leningradsky and Kazansky railway stations, the hotel’s Moscow city area is not grotty. Hilton Moscow Leningradskaya provides easy access to all major transportation hubs with several business centers and various governmental institutions around.

I have stayed here many times and always had excellent service from pleasant and helpful staff. As one of the top Moscow hotels, it also has very comfortable beds, a swimming pool, restaurants, and bars and is a short ride from the Red Square, one of the absolute top sites in Moscow.

While there are plenty of mid-range hotels in Moscow’s historical center, the Red Brick Hotel is my favorite one. Located within walking distance of Kitai-Gorod metro station and the Pryanik Museum, the hotel has some of its rooms decorated with brick walls and, in general, look very stylish. Some of the rooms may be smaller than in other hotels around, but they were recently renovated and are very cozy.

The staff was accommodating and knowledgeable, and they even offered me some valuable tips for exploring the area around. I enjoyed their food in a casual atmosphere, great value for money.

If you’re searching for where to stay in Moscow as a tourist, this district and hotel is always a good choice!

I will be honest; Four Seasons Hotel is one of the best hotels in Moscow. Overlooking the Manezhnaya Square is just three minutes walk from the Red Square and the State Historical Museum. Okay, this hotel near Red Square Moscow is not very far from the Kremlin walls. Still, with 180 elegant rooms, monumental Stalinist architecture, and over-the-top amenities, it offers a wide range of excellent facilities and the best service.

With 60 small no-frills rooms, this accommodation in Moscow is not just a hotel or a B&B, but the owners refer to it as an attractive hotel for business and savvy travelers alike! Located in the Tverskoy District (with exceptional city access and cool and trendy bars in the area), Arium Hotel features a restaurant that serves Caucasian cuisine and a 24-hour gym. The rooms come with complimentary free WiFi. They also provide a roundtrip airport shuttle for a surcharge.

Additionally, the Tverskoy District is also home to renowned Tverskaya Street, the main boulevard and one of Moscow’s best streets. It’s a magnificent road to walk on, flanked by impressive buildings and countless shops. The country’s most expensive street is Russia’s counterpart of other famous boulevards like Oxford Street or the Champs-Élysées.

With a cool and catchy business name, the Vagabond hostel was founded by two nomads who have a reputation for being avid travelers. Their hostel is yet another fantastic place to stay while backpacking Moscow, where you can relax, chat with fellow backpackers and find travel buddies to hang out with. If you’re looking for things to do at night in Moscow, your fellow guests will be able to give you some tips.

It is a really well-thought-out hostel that features a kitchenette, extra luggage storage for your backpacking gear, a shared lounge, and bathrooms. Situated just two metro stops away from Belorusskaya railway station (where Aeroexpress trains from Sheremetyevo arrive) near the monument of Pushkin, this hostel is definitely not to be missed while in Moscow.

Located just a stone’s throw away from Paveletskaya metro station and Paveletsky railway terminal, where trains from Domodedovo airport arrive, Swissotel Krasnye Holmy is a top-notch hotel with a mind-boggling 360-degree panoramic view of Moscow and the river. It takes a couple of seconds to get to the top of the 34-story tower to enjoy dinner and a view on the rooftop terrace.

This area of Moscow is tranquil despite the proximity of the railway station. The hotel has clean and contemporary rooms and suites, a fitness center, a sauna, and outstanding service. 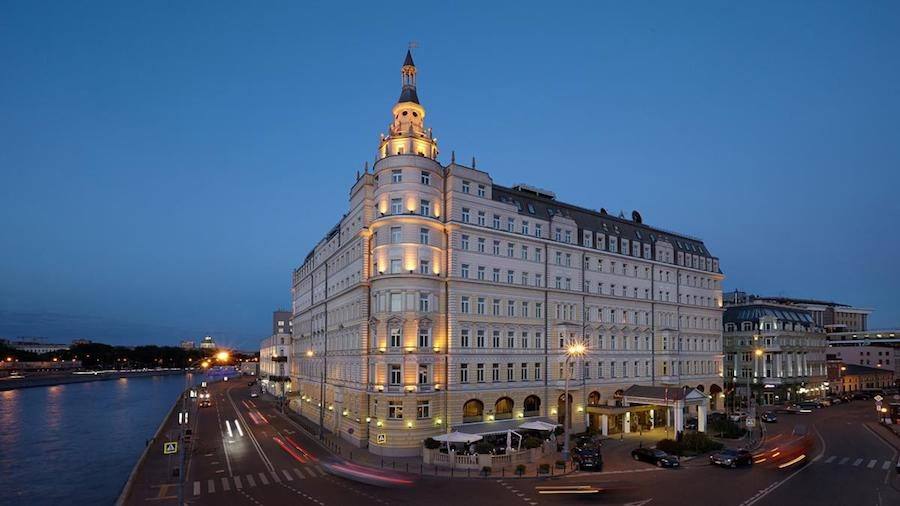 One of the most luxurious hotels in Moscow, the Hotel Baltschug Kempinski building dates back to 1898. Situated in the middle of Baltschug Island, the hotel is within walking distance of major tourist attractions in Moscow, including the Cathedral of Christ the Saviour and the Red Square. Just cross the bridge to find yourself near the best places to visit in Moscow, Russia.

From the moment you step into the lobby, you will be welcomed by the courteous omnipresent staff. Within seconds, you feel remarkably relaxed and comfortable, like a home away from home. The Kempinski hotel has 225 opulent rooms decorated with curtains and other soft furnishings made from sumptuous fabrics. If you’re figuring out where to stay in Moscow, who’s luxurious and high-end, this is a superb choice.

Perhaps one of Moscow’s best hostels for socializing is its central location, proximity to a wide range of tourist attractions, and accommodating English-speaking staff. Located on the third floor of a historical building in the Russian capital’s very heart, the Comrade Hostel is really clean.

While the lack of an elevator may cause some inconvenience, you shouldn’t worry. Ask the staff to help with your luggage, and they will gladly do just that. The hostel offers laundry and self-catering facilities. 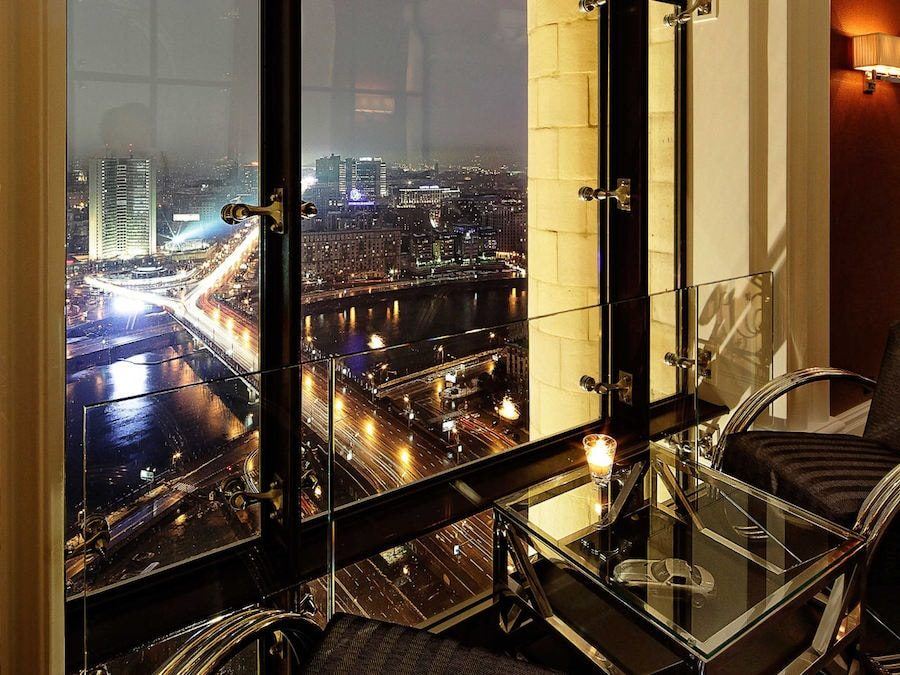 Set in one of the wealthiest Moscow neighborhoods, next to Kutuzovsky Avenue and the Russian Government’s main office, this high-rise is one of the two Joseph Stalin skyscrapers you can actually get into. And it is well worth the effort.

Like its sisters, the Radisson Royal Hotel Moscow, formerly known as the Hotel Ukraine, is unique in its grandeur. The interior underwent a comprehensive renovation in 2010. Now, the hotel is regarded as one of the best in Moscow.

Besides its spectacular collection of arches, stained glass windows, and a painted ceiling, the hotel also has a restaurant serving delicious mouth-watering food. A fleet of all-weather luxury tourist boats cruises the Moscow River even in the dead of winter, definitely one of those cool things to do in Moscow.

More reading: Travel Itinerary For One Week in Moscow

One of the most budget-friendly Moscow accommodation options, the Izmailovo complex comprises five interconnected blocks, which are very popular with big groups of travelers. Each of the five blocks has its own name, but service and prices are often quite similar.

Although not necessarily located in the central Moscow districts, the hotel is situated right beside Partizanskaya metro station. It takes about 20 minutes to reach Red Square by metro. The Izmailovo Kremlin and the area locals call the Vernissage (an otherwise large shopping area and the flea market) were just a bonus to staying at this hotel.

Other Good Hotels In Moscow

If you’re traveling with kids, the Loft Hotel in Basmanny is the best central Moscow hotel. This low-key hotel in the center of town is ideal. Basmanny is an area in Moscow known for its chilled vibe and clean, safe streets.

Just a five-minute walk to Moscow’s heart near the Kremlin and Red Square, this is where to stay in Moscow if you are short on time and don’t want to spend time commuting to the key sights.

This boutique hotel is where to stay in Moscow if you’re on a budget and want a simple room (breakfast included), but you are okay to take a subway ride to and from the city center.

When choosing where to stay in Russia’s capital Moscow, comparing prices at various hotel search engines and booking apps is always important. Also, consider what Moscow is known for and try to stay close to the main attractions.

Thus, if you plan a trip to Moscow, I recommend using price-comparison search engines such as Booking.com or Ostrovok.ru.

Don’t miss these top places to visit in Russia to make the most of your time there!

Other Accommodations In Europe And The Balkans