Written by Margarita Steinhardt from The Wildlife Diaries

Modern-day Moscow is a vibrant metropolis that is both rich in history and modern art and developments. There is plenty to explore in Moscow, from the historic streets to swanky cityscapes to the echoes of the Communist era, plus accommodation in the city is becoming more affordable.

One thing about Moscow is that the city is very fast-paced. And between its pace, the infamous traffic jams, and confusing street signs in Cyrillic script, it can seem quite overwhelming to a first-time visitor.

So here is a straightforward itinerary for a self-guided walk through historic Moscow. This easy to follow trail will take you along some of the city’s oldest streets and won’t involve many street sign interpretations.

What You Will See: 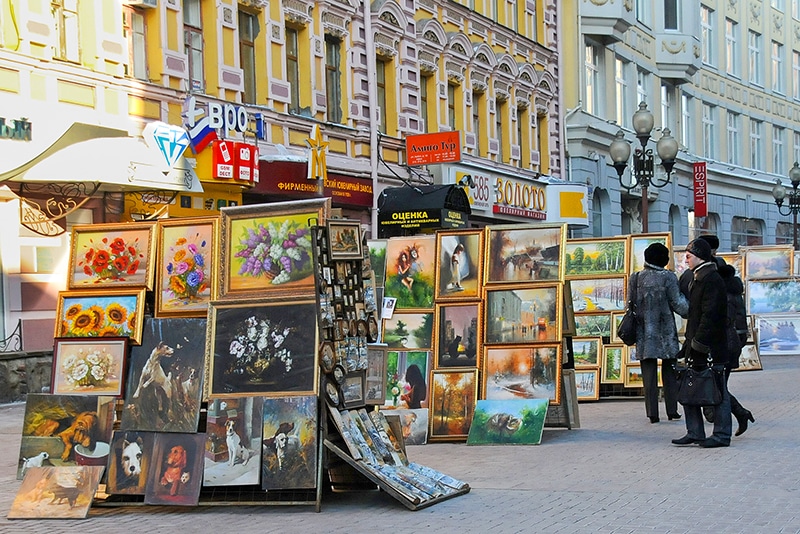 Start your exploration on Old Arbat Street. Located in Moscow’s historical center, Old Arbat is the city’s creative heart and soul. Moscow residents (including me) will tell you that you haven’t been to Moscow until you have seen Old Arbat.

Every city with a long history has such a street, where each building and each back street has a centuries-long story. But Arbat is not frozen in time; it is vibrant, alive, and ever-changing. 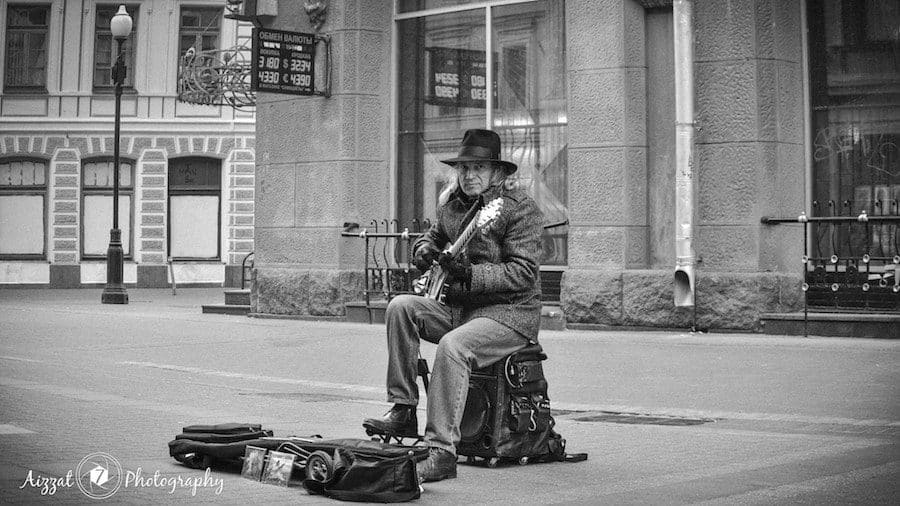 To get to the beginning of the street, you need to take the Metro (subway) to Smolenskaya station. The station itself looks like a museum exhibit and provides a perfect start to our “Historic Moscow” walk.

Once you emerge from the station, veer left, and you are on Arbat. At the beginning of the walk, don’t miss the lovely turquoise-colored mansion (Arbat, 53). Here Russia’s most famous poet – Alexander Pushkin, lived with his beautiful wife after getting married.

About halfway down the street, there is a more modern installation –  a building wall that has been transformed into a homage to the Soviet rock musician – Victor Tsoy, who died in a car accident in 1990. The wall started as a single inscription on 15 August 1990: “Victor Tsoy died today,” Later, many more inscriptions have been added.

At the end of the 1.2-kilometer walk, you arrive at a famous restaurant – Prague, where another Russia’s literally incredible – Lev Tolstoy used to give live readings of his work.

Cathedral Of Christ The Saviour

At the end of the Old Arbat Street, turn right onto Gogolevsky Boulevard and follow it towards the Moscow River and the Cathedral of Christ the Saviour.

Here is the one building that symbolizes all of Russia’s turbulent history of the past two centuries. Built to commemorate the war victims with Napoleon in 1812, it was demolished after the Bolshevik revolution in 1917, when religion was outlawed under the new regime.

In 1960 a swimming pool was constructed on the cathedral site and remained there throughout the Communist Era until the Perestroika and the consequent change of the regime.

In an effort to obliterate the scars left by the Communists and to return Russia to its former glory, the new government-commissioned re-building of the cathedral in the early 90s.

In recent years, the cathedral made a splash in the news when a feminist punk rock band – Pussy Riot, staged a guerrilla performance there in 2012. The controversial performance resulted in one of the most widely publicized court trials and the band’s three members’ consequent imprisonment.

The new building of the cathedral has neither the aesthetics nor the grandeur of the original structure. It is only interesting from the historical point of view and for the part of the city it occupies.

After exploring the Cathedral of Christ the Saviour, walk across the small bridge behind the cathedral and follow the Moscow River the river towards the Red Square (it is visible from the bridge).

Walk under the first large bridge (Bol’shoy Kamennyy Most) and continue until you reach the second bridge – Bol’shoy Moskvoretskiy Most. Climb the stairs up to the bridge, and here you are…. surrounded by some of the most iconic views of Moscow.

There are lots of things to do at Red Square. You can check out Saint Basil’s Cathedral commissioned by Ivan the Terrible, see Lenin’s body in the mausoleum, and absorb the spectacular views. 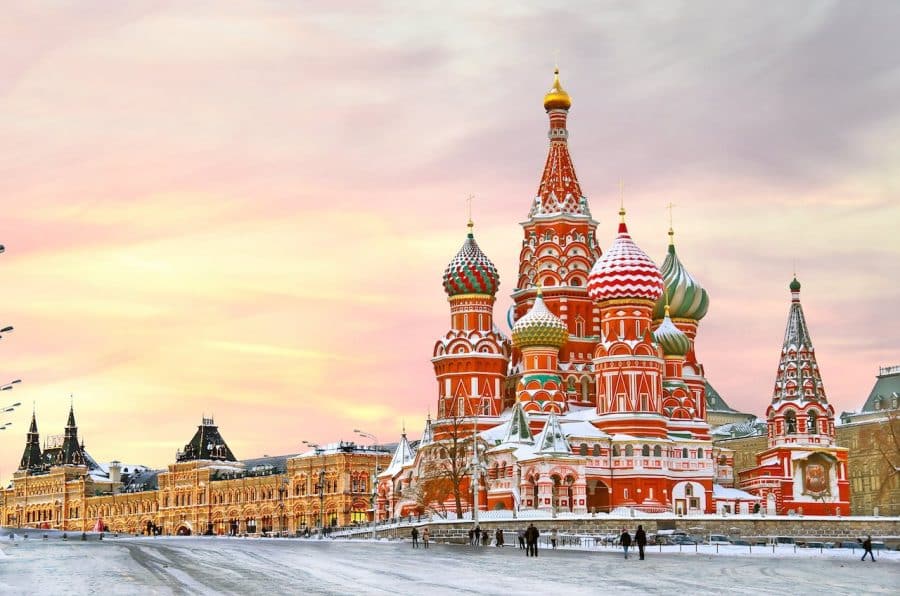 The State Department Store, GUM, located right here at the Red Square, is the perfect spot to see Moscow’s new, uber-wealthy side. Complete with arched ceilings and indoor fountains, the storehousessess some of the world’s most expensive brands.

Of course, to most of the Moscow population, GUM is more of a museum than an actual department store.

If you would like to rest your weary feet but don’t feel like paying for an exceptionally overpriced cup of coffee, head to the Alexandrovsky Garden behind the Historical Museum. It is not Moscow’s biggest city park, but it is green, shaded, and located right next to the Kremlin wall.

Head back towards Bol’shoy Moskvoretskiy Most, behind Saint Basil’s Cathedral, and turn left onto Varvarka Street – the oldest street in Moscow.

This quiet street is famous for housing more churches than any other street in the capital. But it is not all about the churches, of course.

At the beginning of the street (Varvarka, 4) is Moscow’s oldest secular buildings – the Old English Embassy. It was presented to English merchants in 1553 by Ivan the Terrible – one of Russia’s infamous despot rulers. 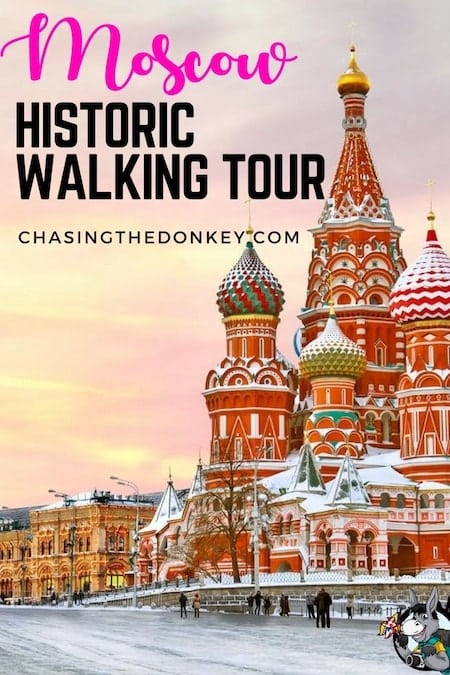 A few meters down the street is another interesting building – the Romanoff Boyars’ Palace, built in XVI-XVII Centuries.

Even before their rise to the throne in 1613, Romanoff has long been prominent Moscow aristocrats, and this area was their domain. The family fortunes first soared when the family founders’ daughter Anastasia married Ivan the Terrible in 1547.

Today, the building houses a museum dedicated to the lifestyle of Moscow’s medieval nobility.

Here the historic Moscow walk comes to an end, near the subway station of Kitay-Gorod.

During the Cold War, one of Moscow’s biggest secrets was hidden below a nondescript, neoclassical building on a quiet backstreet in the central Taganka neighborhood.

To the uninitiated, it was just another residential building. People came in and out, lights came on in the evenings, and the sound of TV drifted out of the open windows.

Only the select few high-level government officials knew that it was all a show. The building was just an empty shell that guarded the entrance to the top-secret underground bunker.

Located 65 meters underground, which is deeper than the Moscow Metro network, the bunker was constructed to withstand a nuclear blast. It acted as a Long-Range Airforce Command Post, equipped with the Red Button for launching long-range nuclear missiles.

Today Bunker 42,  is a Cold War Museum, and reaching it requires walking down 36 flights of stairs down to level -18.

It is an eerie feeling walking along the narrow tunnels underneath the thundering subway trains.

Even more frightening is the short documentary that ticks off the milestones of the Nuclear Race.

Standing in that bunker next to the control panel that could have started the Nuclear War and realizing how close the world came to blowing itself out of the water is a memorable experience, to say the least.