Home > Let’s Head Underground To The Best Caves In Croatia

Croatia is full of natural wonders. We’ve shared 16 of Croatia’s best beaches with you, and now we introduce you to some of the best caves in Croatia. We’ve already shared Modric Cave; now, here are eight more. If you’re interested in geology or archaeology or want to gaze at the stunning beauty of Croatia’s underground, read on to discover the best locations to take the plunge (in no particular order)!

The well-known Modra Špilja, also known as The Blue Grotto or The Blue Cave, can be visited in the Islet of Biševo. With the light rays from the sun penetrating the cave’s submerged entrance, it is brilliantly illuminated with blue light giving the waters a spectacular glow.

It is referred to by many as the most attractive natural phenomenon in the Adriatic sea. Book a tour with a reputable guide and see the stunning colors for yourself!

Baredine Cave is a real gem of Istria. While in the cave, stop to view the underground animal world – yes, animals have made this a habitat! Walk through the underground cave, admiring ancient stalagmites, stalactites, and many other “sculptures” created naturally by water moving through the passages.

Enjoy the decorated chambers, realistic sculpture of Our Lady, the replica-like of the Leaning Tower of Pisa, and more in a very pleasant all-year-round temperature of 14ºC. For extra fun, kids and adults alike can suit up with a rope and harness to do a little climbing.

The mesmerizing Veternica Cave, located in the heart of the Medvednica Nature Park, is famous for its historic archaeological sites. It is considered the fourth longest cave in Croatia and is an important natural site open for tourist exploration. The cave is protected to help preserve natural phenomena occurring within – sandy dunes and vortex pots.

Other items of interest are fossils, the jaw of an extinct bear, and a stone waterfall. Lucky for us, these unique wonders are made viewable to visitors! Plan to bring appropriate clothing during your tour, as it is 10ºC inside all year round.

The Zmajeva Cave, popularly known as the Dragon’s Cave, lies within the village of Murvica (7 kilometers from the charming town of Bol). The cave is an excellent attraction for visiting tourists, with breathtaking carvings such as the Chapel of our Lady Madonna and reliefs of the moon, angels, and dragons.

Scientists are still on a mission to interpret the meaning of these reliefs. Some insist they are portraits of Slavic mythology, while others claim they are iconographies of Christianity. Either way, they are stunning carvings to see in person!

The fascinating Samogradska Cave is one of Croatia’s most depicted show caves. It has been established as a tourist favorite due to its richness in calcium formations, icicles, stalagmites, and stalactites, all of which are highlighted with electric lightings, accentuating the fantastic inside appearance.

It is also the first cave in Croatia to have its own geodetic scheme. Samogradska Cave is the perfect venue for tourists seeking an exciting and picturesque underground cave experience. 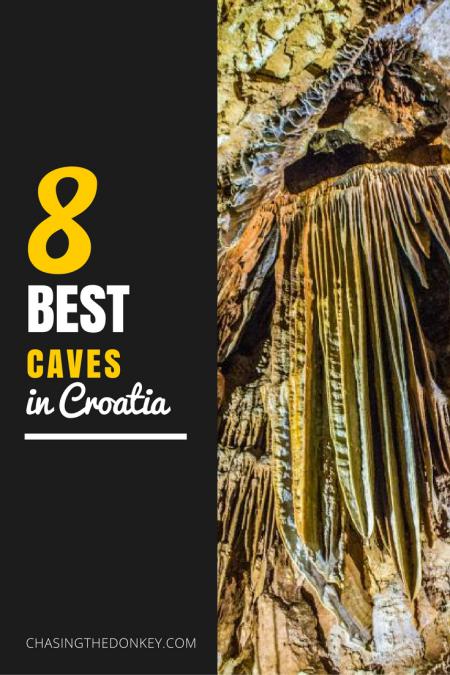 Vrlovka Cave comprises a small cave river and many dripstone structures. Ancient cave settlers, such as the famous Lasinje Culture, left their remains, which the cave’s excavations have brought about. Vrlovka has been adapted for tourist sightseeing with its spectacular yellow dripstone formations and rich archaeological features.

The magnificent Vrelo Cave, located in the small town of Fuzine, is one of the show caves in Croatia. With two spectacular halls that enthrall tourists and a 30-meter lake, it’s easy to see why people call it the show cave. Illuminated with artificial cave lighting, visitors can enjoy beautifully displayed speleothems along with many other beautiful features inside the chambers.

Vrelo means ‘spring’; thus, there is also a cave spring that is believed to have healing waters for various illnesses. With still, calm waters all year round, this cave has become a favorite for visitors seeking a quiet and untouched natural retreat.

The surprisingly hidden entrance of Biserujka Cave gives visitors an exciting feel. Located on the island of Krk, this cave is famous for its stunning collection of stalagmite and stalactite formations. This is also an underground abode for many musical performances due to its spacious and untouched natural cave hall.

With the cave’s perfectly illuminated sediment formations and calcine pillars, there has been a significant rise of interest for many artists to make this a gallery for their art shows.

Croatia caves can be found around the country, but it’s nice when they are located somewhere you might already be heading.

The Barać Caves are conveniently found next door to Plitvice Lakes National Park and make for a quick stop after you’re done checking out the gorgeous Plitvice waterfalls. These protected caves were opened to visitors back in 1892 and still welcome visitors for guided tours.

These caves are special as they are one of the few karst speleological sites that can be entered. Enjoy majestic dripstones, stone monuments, stalactites & accompanying stalagmites, and all kinds of cool information on previous inhabitants of the cave on your tour.

When making a list of famous caves in Croatia, we couldn’t leave this one out! Vindija Cave, located 12 km from Varaždin in northern Croatia, will excite any history buff. It is known for being home to some of the best-preserved Neanderthal fossils anywhere in the world. The Neanderthal genome project even used DNA from one of the fossils found here for sequencing.

It’s an excellent stop for people interested in learning about human history and Neanderthal importance!

Located in Rovanjska, which is 30km from Zadar, this makes for a great day trip from the city! Exploring this cave is a superb experience – be prepared to be awestruck by the grandeur of it all. Floor-to-ceiling stalactites, stalagmites, columns, and various speleothems can be observed in the nine chambers you pass through.

This cave is untouched by mass tourism and is in its natural state. In one part of the cave, they found a man’s fossil remains from the bronze age, around 4000 years old, and a cave bear from the ice age.

You need to be on tour to get into the cave, as the cave is not open to the public. We visited with Zara-Adventure in Rovanjska.

Read more about our experience of touring the cave here!

Situated in the southern part of Velebit Nature Park, the Cerovačke Caves are one of Croatia’s most significant speleological destinations. The cave complex comprises three lower, middle and upper caves and has 7 kilometers of explored passageways. Tourists can visit the first 700 meters of the Donje Gornje Cave.

In addition to numerous stalagmites and stalactites and karst chimneys and ravines, the Cerovačke Caves are also home to important archaeological sites. Ancient human remains, bronze tools, and fossils of animals, such as cave bears, have been found there.

Visiting the Cerovačke Caves is one of the most popular Lika-Senj attractions. This is one of the largest cave bear sites in the country. It makes a great day trip from Zadar.

Of all of the caves in Croatia, this one may have the most unique backstory. As is often the case with small Mediterranean islands, Mljet is shrouded in myths and fables.

Mljet National Park is a large protected area encompassing the western third of the island, which is one of the best islands near Dubrovnik. The park is home to several great natural attractions, including the nymph Calypso’s cave. According to Greek legend, Odysseus was held captive for seven years after being shipwrecked on the island. It’s certainly worth checking out the place where their love story is said to have started and the cave that has since been named after him!

So, which underground cavern will you explore this year?