Arguably Bosnia and Herzegovina’s most famous city, Medjugorje, is a world-famous Catholic Pilgrimage site where the Virgin Mary appeared to six local children in 1981 and continues to do so today. Therefore, Medjugorje has become very popular among Catholics, with millions visiting this holy site.

A day trip to Medjugorje from Split has become increasingly popular over the years, and the town is growing into a major tourist destination. 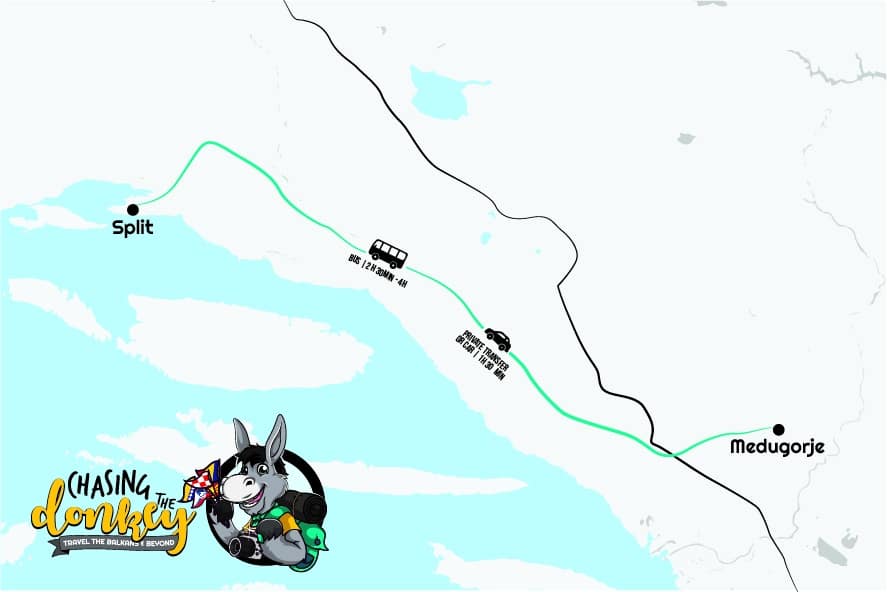 How To Get From Split To Medjugorje

Medjugorje is located 185 kilometers from Split. The journey takes anywhere from 1.5 to 4 hours, depending on your mode of transport.

The bonus is that Medjugorje is only 25 kilometers from Bosnia and Herzegovina’s other major attraction, Mostar. We recommend you visit both destinations while there!

As always, taking a bus is your cheapest mode of transport in Croatia, and several companies will take you from the Split bus station or airport to Medjugorje. Travel times vary from 2.5 to 4 hours depending on the bus you take and the number of stops along the way. Bus tickets cost 7- 18 euro.

The major drawback of a bus from Split to Medjugorje is that you are at the mercy of the Split bus timetable. So, this may not be your best option if you are time-poor or don’t like traveling on a bus.

You can check out the Split to Medjugorje timetable online or at the central bus station.

By far, the most time-efficient and comfortable mode of transport is to take a private transfer from Split to Medjugorje.

Your driver will pick you up from your accommodation or the Split Airport, and you will be on your way to Medjugorje. The best part of a Medjugorje to Split transfer is that you have ultimate freedom. You decide when you leave, where you stop, and how long you spend in Medjugorje. You can use the vehicle to get around Medjugorje while there.

The travel time is about 1.5 hours, giving you more time in Medjugorje or time to visit Medjugorje and Mostar should you wish.

A private transfer from Split to Medjugorje will cost you more than the bus. Prices start at 140 euro for a car that seats up to 3 passengers or 160 euro for a minivan seating up to 8 passengers.

With several people traveling together, a private transfer from Split to Medjugorje becomes very affordable. It allows you to travel in a 5-star style for a fraction of the price of traveling alone.

For any inquiries and bookings for private transfers from Split to Medjugorje, you can contact Octopus Transfers Croatia below.

A former poor wine-making town in rural Herzegovina, Medjugorje has become a major Catholic pilgrimage destination since, in 1981, the Virgin Mary allegedly appeared to six local children. Medjugorje hoax or truth? You decide.

Nowadays, the town, located just southwest of Mostar and near the border with Croatia, is a bustling tourist hotspot. And even though the Catholic Church hasn’t officially acknowledged the legitimacy of the apparition, it continues to be a popular pilgrim’s destination. Pope Francis announced in February 2017 that he plans to send a bishop to the Medjugorje shrine to gain “deeper knowledge” of the pastoral needs of millions of Catholics drawn there by reports of apparitions of the Virgin Mary.

Find your Medjugorje accommodation here for an overnight stay.

The first apparition of the Virgin Mary was reported on June 24, 1981, by two local children—Ivanka Ivanković and Mirjana Dragicevic. The next day, they and four other children—Ivan Dragicevic, Vicka Ivanković, Marija Pavlović, and Jakov Colo—reported another vision. Some of those six children, now adults, still claim to receive visits by the Virgin Mary almost daily.

The Virgin Mary is said to have first appeared to the children on a hill called Crnica in the village of Podbrdo. The vision was alleged of a white-shaped person holding a child in her arms.

As the apparition is called, Our Lady of Medjugorje is said to bring messages to the six people, who are called “visionaries,” to whom she appeared. These messages, including “nine secrets,” have found a following among many Catholics worldwide.

Since the first apparition became known, Medjugorje has quickly grown into one of Europe’s most popular Catholic pilgrim sites. Even though Rome hasn’t yet acknowledged the apparitions, more than a million people visit the town each year, making it the third most important apparition site in Europe.

There’s some real and honest faith involved, but, as with many of these locations, there’s also an undeniable commercial side to it. You can read more here.