How To Spend An Amazing Weekend In Sarajevo

Home > How To Spend An Amazing Weekend In Sarajevo

How To Spend An Amazing Weekend In Sarajevo, Bosnia & Herzegovina

Written by Mike from The Adventourist

Sarajevo is a charming city with a vibrant history. The capital of Bosnia and Herzegovina is known worldwide for many different events, including both positive, the 1984 Winter Olympics and negative, Franz Ferdinand’s assassination that started World War I.

But in the end, it doesn’t matter why you’ve heard of the city or why you’re visiting. The only thing that matters is how to have a good time, and that’s exactly what we’ll be talking about here.

From trying delicious local dishes to learning about the city’s rich history, here’s exactly how to spend an amazing weekend in Sarajevo!

And don’t forget to check out these top-notch accommodations in Sarajevo! 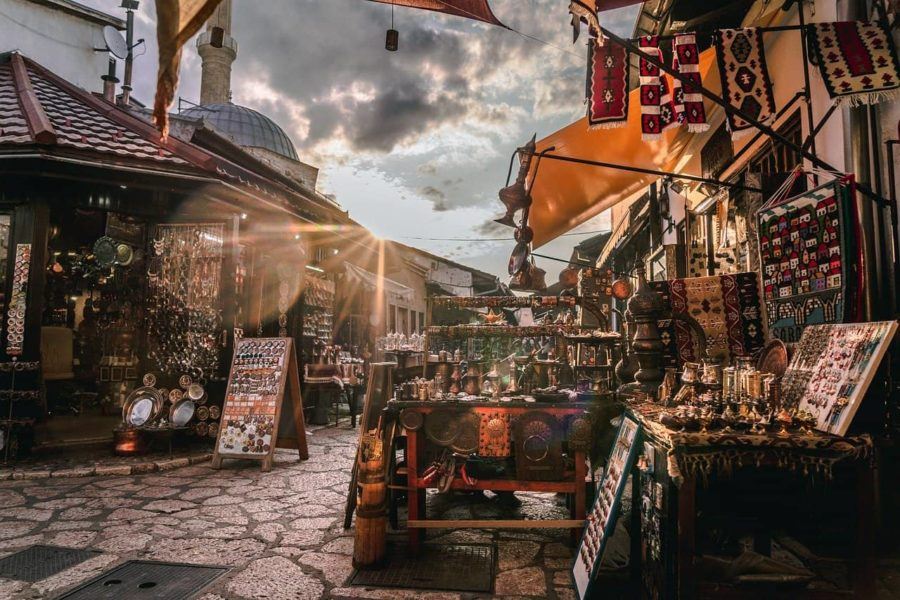 Spending even just a little time in Sarajevo is one of the best things you can do while in Bosnia and Herzegovina. And the historic old town is a highlight you absolutely have to see

It is also known as Baščaršija or simply Čaršija by the locals, and it is located right in the heart of the city. Čaršija is characterized by cobblestone streets, restaurants that serve traditional foods, hookah bars, and souvenir shops.

In order to get to the old town, you have to walk through the city center first. And there you will find one of the best-known monuments in the city, the Eternal Flame. The most iconic Sarajevo monument was built right after World War II, and it’s actually a monument to victims killed during that war. The Eternal Flame actually runs on gas, which is why it’s always burning, no matter how cold or wet it is outside.

From there, just head straight through Ferhadija street, and you will reach Čaršija in no time. When you notice that local souvenir shops replace the urban clothing stores, and traditional patisseries and cafes replace the fancy restaurants and pubs, you’ve officially entered the old town.

Čaršija is known for many things, but by far, the most famous thing about it is Sebilj. The iconic 18th-century landmark is actually a water fountain, and there are folk tales surrounding the destiny of those who drink from the fountain. But they’re not dramatic – folk tales say that if you drink from Sebilj, you will eventually return to Sarajevo. The water is entirely safe to drink, and it’s always pretty cold and free of charge – perfect for refreshing yourself during hot summer months. 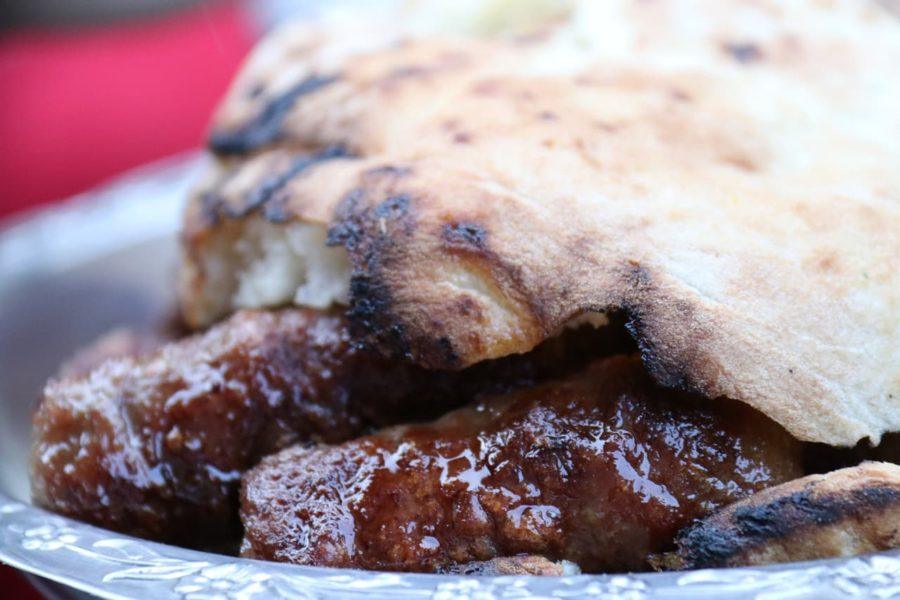 Food is an essential part of Bosnian culture. So much so that there is a word in the language that describes a person who loves to eat – ‘poguzija.’ But don’t say that to just anyone, as it could be interpreted as mildly offensive if you say it to someone you’ve just met.

Anyway, you have to try some local foods if you’re ever in this wonderful city. Forget about going to McDonald’s, and instead head straight to the heart of Sarajevo, Baščaršija. That’s where you will find some of the best restaurants that serve traditional foods.

Ask any Sarajevan what’s the first thing you should try in the city, and the answer will almost always be ćevapi. The dish consists of minced meat kebabs served with flatbread and chopped onion, and it’s one of the most iconic Sarajevo dishes. You can try it in any of the many ćevabdžinica’s in the city, but we recommend Željo. We’re not trying to anger any Sarajevans as there are always debates on who serves the best ćevapi in the city. Still, Željo has the highest ratings on Google Maps TripAdvisor.

When it’s time for dessert, head to Saraj Bosna. The patisserie is hidden in an alley in Ferhadija street, just opposite the Alija Izetbegović square. We highly recommend you try their baklavas, as they are the best in the city. Our favorites include the classic baklava, the chocolate baklava, and the baklava filled with sweet kajmak – that the last one is a personal favorite and something any sweet-tooth will love. 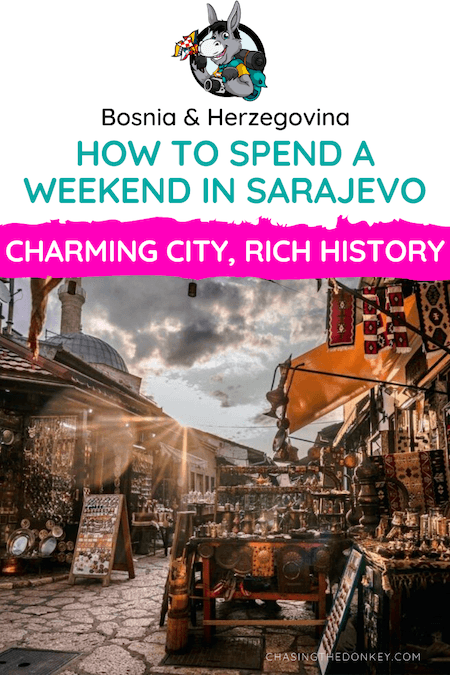 Many museums in Sarajevo are dedicated to the most recent war, as it had such devastating and long-lasting effects on the city. However, learning about the horrible things that the people of Sarajevo went through during the siege is a lot more depressing than thrilling so that we won’t dwell too much on these.

If you’re truly interested in learning about the most recent war and its consequences, go to the War Childhood Museum or the 11/07/95 Gallery. But be prepared for a depressing experience.

And if you’re just looking for light-hearted and fun museum visits, definitely go to the National Museum of Bosnia and Herzegovina. It is a huge museum with many different sections and exhibits, the most famous of which is probably the Sarajevo Haggadah.

Just across the street from this museum, you will find the Historical Museum of Bosnia and Herzegovina. Apart from the permanent exhibits on the country’s history, this museum is often home to various modern art exhibits, so there’s always something fun to see there.

And if you want to see works from Bosnian artists, head to the National Gallery of Bosnia and Herzegovina in the city center. There are temporary exhibits in the gallery quite often as well, which feature works of artists from all over the world.

Don’t miss this entire post dedicated to the museums of Sarajevo!

Shop ‘Til You Drop

And I’m not talking about hitting up the huge chain stores that you can find in virtually any other country. I have in mind the smaller shops scattered throughout the old town and sell all sorts of things, from slippers to hookahs.

You’ll notice this yourself the first time you walk around the narrow alleys of Baščaršija. With so many different shops, you can find virtually anything your heart desires in Sarajevo’s old town. And not just souvenirs – leather bags, shoes, hats, traditional outfits, scarves, fancy jewelry, watches, and the list just goes on and on. You can even get a belly dancer outfit in some stores, which could make a pretty cool present.

If you’re more interested in getting clothes you can actually wear, you should visit the bazaar in the city center. When you reach the Eternal Flame and stand in front of it, you’ll see a narrow passage to your right. If you go through the passage, you will enter the land of cheap clothes, jewelry, toys, accessories, shoes, bags, designer knockoffs, and pretty much anything you think of. The bazaar in Sarajevo city center is called Sirano, and it’s perfect for those of you who like shopping on a budget.

The geographical position of Sarajevo is a big part of its charm. It lies in a valley, surrounded by mountains and hills that offer wonderful views of the city. And, no matter where you are in Sarajevo, you can be on a mountain in about 30 minutes. Igman, Trebević, Jahorina, and Bjelašnica are all popular for fun outings, and many Sarajevans escape there during the weekends.

But that takes up a lot of your time and requires you to have a car. So, why not take on a hiking trail that actually begins in the city center and takes you to Barice? If you really want to challenge yourself, make the entire trail on foot – it takes about 2-3 hours to complete the uphill hike, depending on the weather conditions.

And those that are not looking for a challenge can take a minibus to the popular picnic area. The minibus runs only on the weekends, and it departs from the Park station in the city center.

If you opt for the minibus, you can do some more hiking when you reach Barice. The area is some 4 kilometers away from Čavljak, which is even more beautiful. There’s a restaurant on-site where you can enjoy traditional Bosnian food and drinks while admiring the breathtaking nature around you. 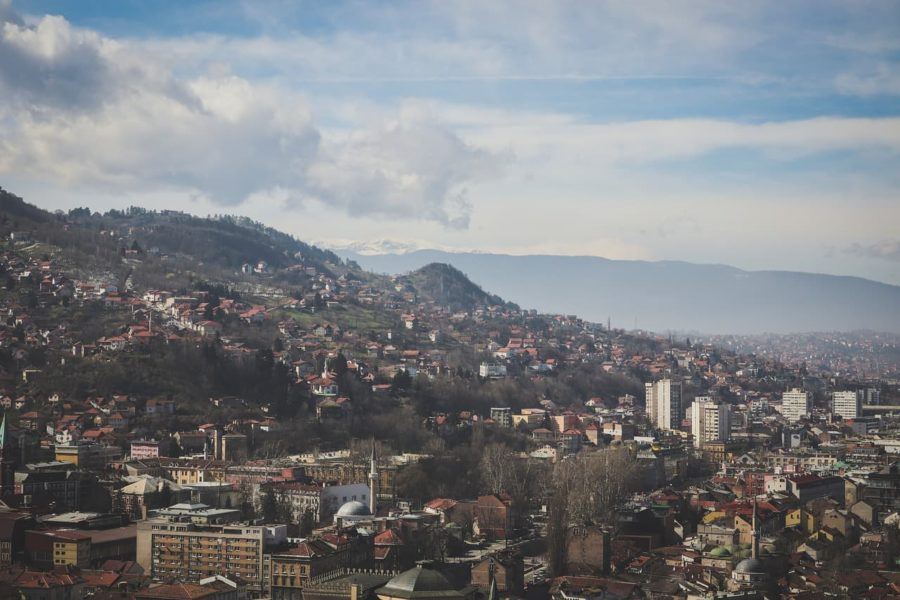 Your weekend in Sarajevo won’t be amazing if you haven’t experienced at least one picturesque view of the city. So, let’s talk about the best spots in the city that offer panoramic views.

The easiest one to visit as a tourist is the Avaz Twist Tower. You need to buy a ticket to get to the observation deck on the 36th floor, from where you can admire an astonishing view of the city and the hills that surrounded it.

Another popular spot is the White Fortress above the old town. It takes about 30 minutes to reach it from the Sebilj monument, but it’s an exhausting hike. Yes, I dare call it a hike since you’re only going uphill, and you really feel the burn in your calves. But the view from the top makes it all worth it.

And if that’s too much for you, head to the Yellow Bastion instead. This promontory point is only 10 minutes away from the Sebilj monument, and it’s super easy to reach. There’s also a cafe on-site, so you can sit down for a drink while you’re taking in the views.

If you’re willing to go a little outside the city center, you can experience even more beautiful views. Gönül Kahvesi cafe is the perfect spot for a cup of coffee and a delicious cupcake, with an exquisite view of Sarajevo. And very close to it is Park Prinčeva – a classy restaurant that offers the same astonishing views, making it the perfect place for a romantic dinner date. 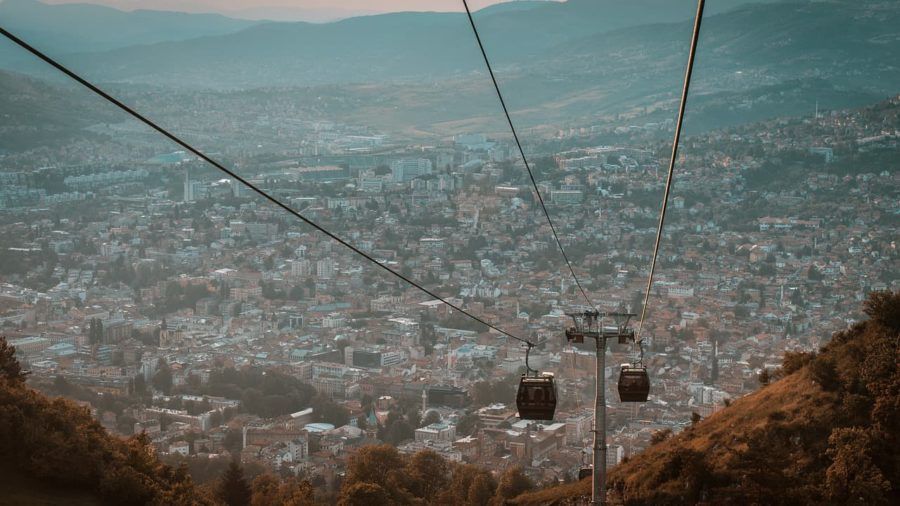 If you’re not afraid of heights, you should definitely ride the Trebević cable car. It’s fun, and you’ll get to experience incredible views of the city. Plus, if you ride the cable car, you can actually visit the Trebević mountain.

The cable car symbolizes the city; it was initially opened in 1959, but it was destroyed during the siege. It was reconstructed in the last few years, and it finally opened to the public in 2018.

The ride lasts about 7 minutes, and it’s quite fun. You can get out when you get to the top, or you can just stay in the cabin and make your way back to the city – it’s up to you. If you decide to get out and explore Trebević, definitely visit the abandoned bobsleigh track, as that’s one of the most iconic spots on the mountain.

And if you’re not in the mood to walk around the mountain, you can complete the entire ride in some 20 minutes.

Once you’re done exploring Sarajevo, check out these cool day trips from the city!