Top Things To Do In Chișinău, Moldova

Home > Top Things To Do In Chișinău, Moldova

Top Things To Do In Chișinău, Moldova

Written by Jill from Reading The Book Travel, a British blogger who has been traveling across 65 countries for more than 15 years.

The capital of the Republic of Moldova since independence from the Soviet Union in 1991, the city of Chișinău (often referred to by its Russian name of Kishinev) is an unusual destination even for regular visitors to Eastern Europe. But this compact city retains much of its historical charm, making it a great place to visit for anyone who likes to get off the beaten track.

Moldova is, in many ways, the last untouched frontier of Europe. Originally one half of the Principality of Moldavia along with the Romanian province still known as Moldavia today, it passed through Ottoman hands before becoming part of the Russian empire in 1812.

But when the Soviet Union was formed in the first half of the 20th century, the eastern half of Moldavia was swallowed into the USSR as the state of Moldova.

Moldova’s reputation as the breadbasket of the Soviet Union gave it recognition well in excess of its tiny size. But since the end of communism in the region in the 1990s, it has struggled to find its way.

Today the most impoverished country in Europe, Moldova, is edging towards real democracy and a truly European standard of living but still has an untouched charm that appeals to the few visitors who venture this far east.

Most visitors to Moldova arrive either by bus or train from Romania and Ukraine or into the international airport at Chișinău. An ever-increasing number of direct flights from major European cities such as Frankfurt, Warsaw, Moscow, and Bucharest means that there is a good chance of an easy connection from destinations farther afield.

To get to the city center, take trolleybus 30 for a cost of 2 lei. Taxis are affordable if you have a lot of luggage or prefer to have a private transfer.

Top Things To Do In Chișinău

Below are just some of the few things to see and do in Chișinău, Moldova. Enjoy!

In the heart of the city center, Ștefan cel Mare (Stephen the Great) Park is a popular hangout for local families, as well as lovers looking for a place to meet! In the summer months, the leafy paths lead to sparkling fountains, while the restaurants and cafés are the perfect places to while away a few hours.

Monument To Stephen The Great

This statue, on the edge of Ștefan cel Mare Park, commemorates Stephen III (Stephen the Great) of Moldavia, who ruled for 47 years in the 15th century and was reputed to be one of the most astute rulers of Europe at that time.

Cathedral Of The Nativity

Diagonally opposite Ștefan cel, Mare Park lies one of the most impressive buildings in Chișinău, the Cathedral of the Nativity.

This cathedral, the seat of the Moldovan Orthodox Church, was built in 1830 and was used as an exhibition center during the Communist period. Head inside to see the beautifully restored frescos and golden iconostasis (altar screen). 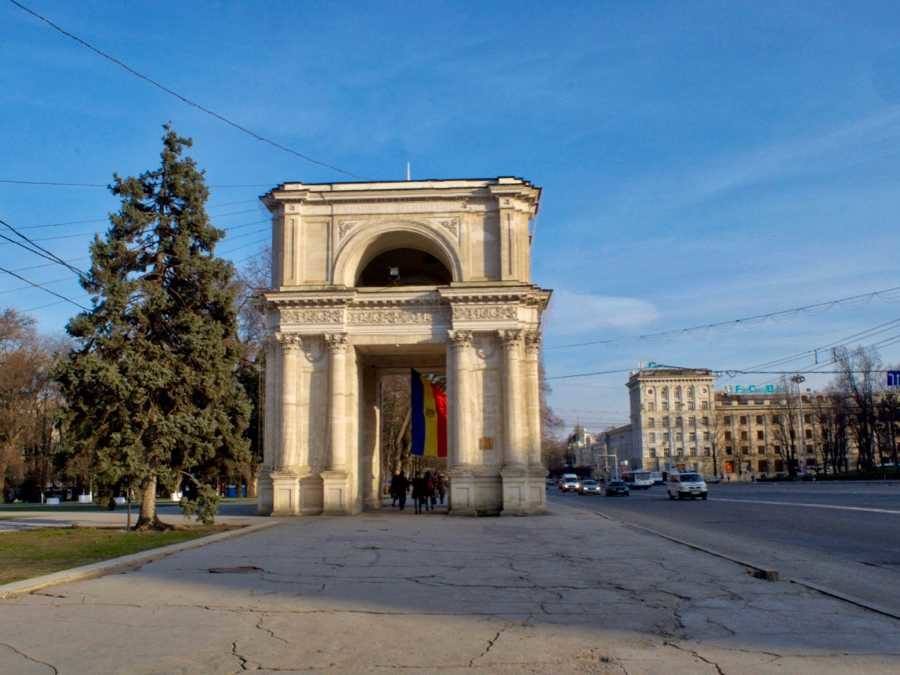 Chișinău’s very own Arc de Triomphe, the triumphal arch next to the Cathedral of the Nativity, was completed in 1831 to commemorate the Russian Empire’s victory over the Ottoman Empire in the Russo-Turkish war.

Chișinău’s very Soviet war memorial sits a little way out of town but is well worth the walk. Admire the polished stone markers and eternal flame, both of which commemorate the Soviet soldiers who died during the Great Patriotic War (World War II). Photography is not permitted unless you fancy being shouted at by the guards (as I was when I didn’t realize!).

National Museum of History of Moldova

If you want to discover Moldova’s history and heritage, there is no finer place to visit than this museum, located in a spectacular building in the heart of the city. Over half the exhibits belong to the nation, and exhibitions change regularly. Entry costs 10 lei (0.50 euro) for the permanent exhibition and a further 10 lei for the temporary exhibits. 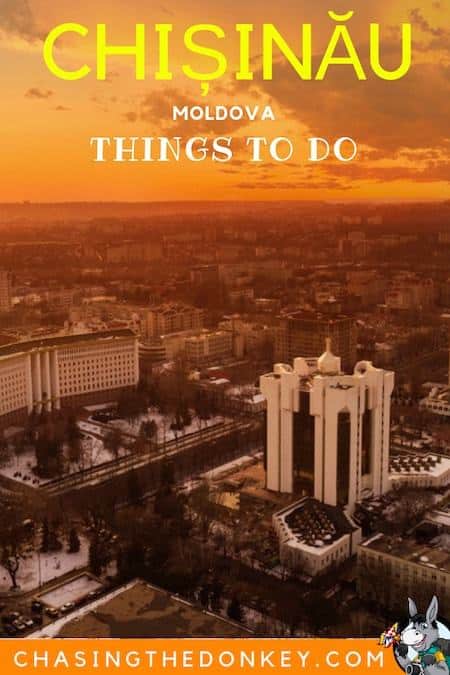 Located in a wonderfully exotic Islamic-style building, the National Museum of Ethnography and Natural History is worth a visit even if you don’t intend to go inside. If you do venture in, you will find exhibits on Moldova’s plants and animals, as well as its peoples and cultures. Entry costs 20 lei (1 euro).

Formerly the headquarters of the Central Committee of Moldova’s Communist Party, this imposing building close to Ștefan cel Mare Park and the Cathedral of the Nativity is today home to the country’s democratic parliament. When politics gets heated, the pavement in front of the parliament building is often home to protestors.

There are many markets worth visiting in the downtown area. Check out the flower market close to the cathedral or the souvenir market on Arts Square close to the National Drama Theatre. For fresh food and drink, visit the Central Market on Strada Ismail.

Take An Excursion From Chișinău

Moldova is extremely proud of its winemaking tradition; in Soviet times, Moldovan wine was famous throughout the USSR. The country’s two primary wineries, Cricova and Mileștii Mici, are just a short distance from the capital.

Both are vast. Cricova, the smaller of the two, has a mere 120km of wine shelving, whilst Mileștii Mici has a whole 200km of wine on offer and holds the Guinness World Record as the biggest wine collection in the world. 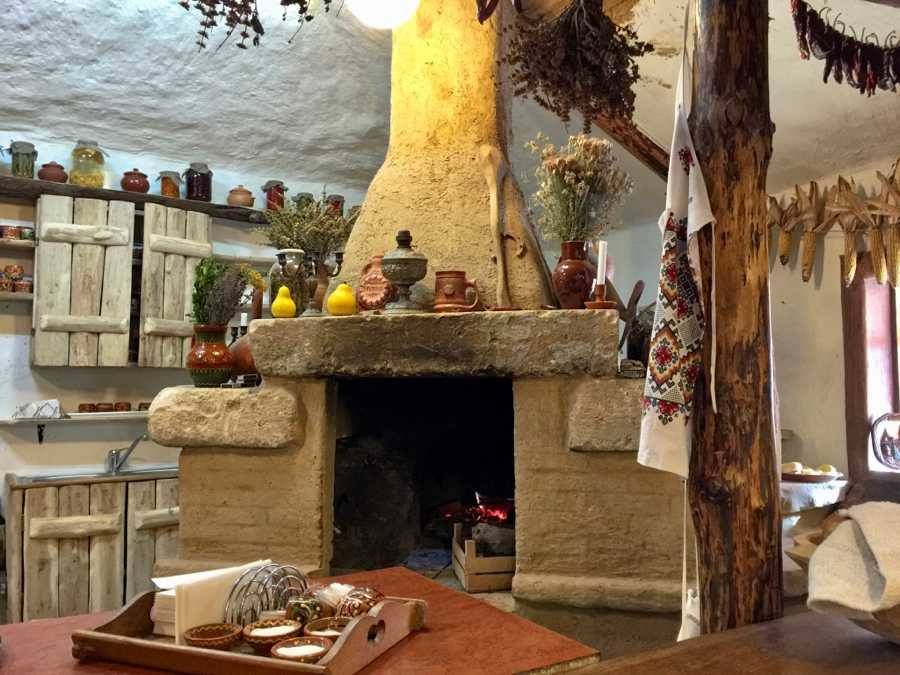 The clifftop monastery at Orheiul Vechi, around 1 hour’s drive north of Chișinău, is on UNESCO’s tentative list for World Heritage Status, with only Moldova’s political situation and poor infrastructure standing in its way. The modern Orthodox Church high on a hilltop is worth the visit on its own, but the real jewels are the ornately decorated cave chapels cut into the cliffside, where monks still live to this day.

A visit to Orheiul Vechi and a drive through the nearby village also offer an insight into rural life in the poorest country in Europe. While you are in the village, take the opportunity to try some Moldovan home cooking at restaurants such as the traditionally-styled Eco-Resort Butuceni.

A stay in Chișinău allows you to take a day trip to possibly the most eccentric corner of Europe. The tiny republic of Transnistria, a sliver of Moldovan territory sandwiched between the Dniester River and the Ukrainian border, is an anomaly.

This strip of land is not ethnically Moldavian and belonged to Ukraine before Soviet times. Incorporated into Moldova under the USSR, after independence, the Russian-speaking population found themselves on the wrong side of the divide. The solution? Declare their own republic, which they did in 1990.

Transnistria is not recognized as a nation by anyone other than Russia and itself, but that doesn’t stop it from having its own flag, currency, stamps, and identity. An hour’s drive east of Chișinău (and also accessible by train), the Transnistrian capital is not to be missed. Witness Russian slogans, Soviet-style war memorials complete with tanks, a beautiful Russian Orthodox cathedral, and one of the few statues of Lenin still standing, in pride of place in the city center.

Transnistria is also the best place to pick up some Kvint, the Moldovan brandy, which is one of the country’s biggest and best-loved exports.

For more information on the perfect day trip from Chișinău, check out Best tours in Moldova: Chișinău to Tiraspol & Orheiul Vechi.

Do I Need A Visa For Moldova?

If you have a passport from the USA, Canada, Australia, and most European countries, you will not need a visa to enter Moldova as a tourist for up to 90 days. See the Moldovan Ministry of Foreign Affairs website for more information.

Language And Currency Of Moldova

The primary language spoken in Moldova is Moldovan, which is very similar to Romanian. However, with a legacy from the Soviet period and a large Russian population, Russian is also commonly heard and used. Signage is likely to be in both languages.

Many young Moldovans speak good English, but this is not always the case, so be prepared with a phrasebook if necessary.

The currency in Moldova is the Moldovan leu (pl. lei). Other currencies such as euros and dollars are not commonly accepted, although tour companies may ask you to pay in euro.

Where To Stay In Chișinău

The city center has a wide range of hotels, although most major chains have not yet reached Moldova. I stayed at the Hotel Joly Alon in the city center;. However, not luxurious, the hotel is comfortable and wonderfully ex-Communist in style, and the location is hard to beat.

What To Eat In Chișinău

Moldovan food has a character all its own and shouldn’t be missed on a visit to the country. Try plăcintă, a light pastry with a choice of filling including cottage cheese and potato, or mămăligă, a cornmeal porridge similar to polenta. Beef, pork, and cabbage are also staples of Moldovan cuisine.

You can find both local and international foods downtown, although, at the time of my visit, there were no international chain restaurants. If you fancy a coffee, Starbucks is conspicuous by its absence, but check out Tucano Coffee, a local Moldovan chain offering the usual Americanos and lattes but with unusual flavors you won’t find anywhere else!

Now that you know about a few of the best things to do Chișinău, Moldova – what will  you start with first?