A month or so ago, I saw a local event pop up in my Facebook newsfeed and clicked ‘interested,’ as I do with many events in Croatia. I am always looking for events, activities, and exciting things to do in Zadar, my adopted hometown.  I mean, I may not be able to join in all the fun of most events, but I like to share them on my social media.

This time it was an event titled ‘Zadarska Koka,’ I had no idea what it meant, but the pretty sailing boats in the picture caught my eye, and my limited Croatian let me know it was some kind of sailing regatta.

Cool, I thought, the boys and I can go into town and watch this – an excellent October weekend idea. But nope, as things can happen here in Croatia, a very generous offer came my way. This time, it was from Iva, the Zadar Outdoor Festival organizer and the president of the Community of Adventure Tourism at the Croatian Chamber of Commerce. Iva invited me to join her crew, despite having no sailing experience or any freaking idea of what the heck happens in a regatta. 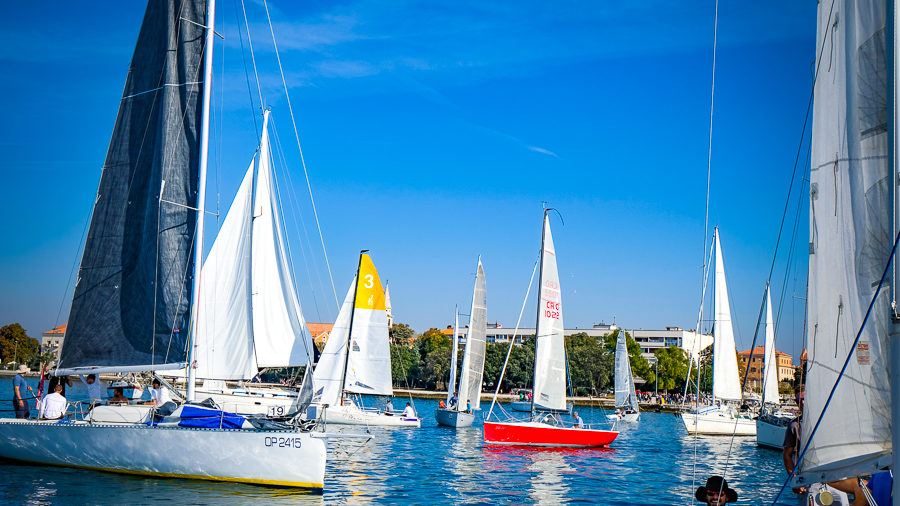 The Zadarska Koka, as it turns out, is an uber-popular sailing regatta and is an essential event in my northern Adriatic coastal city, drawing both locals and tourists to Zadar’s magnificent waterfront.

Honoring the centuries-long naval history and sailing traditions in Zadar, the Zadarska Koka takes place each October, and as I learned, let me say, it was one of the most fun things in Zadar that I have done! 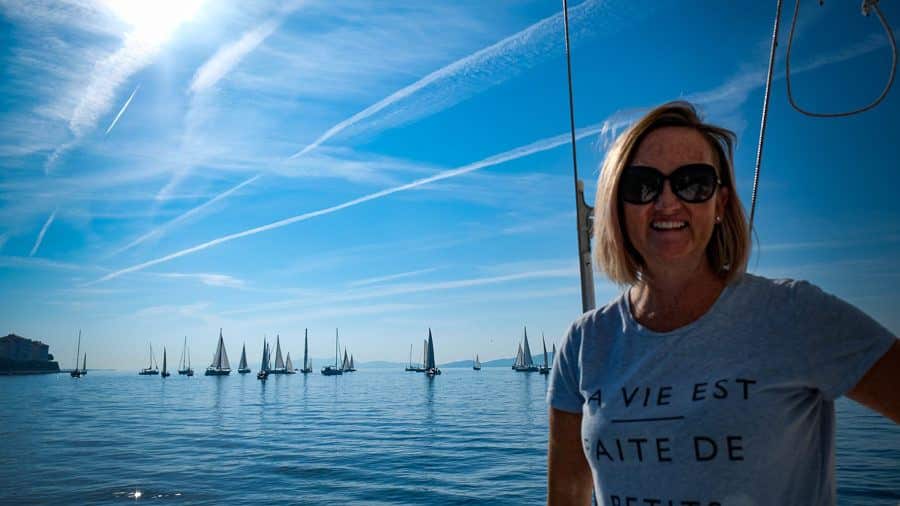 When the regatta day rolled around, I was nervous – I had no idea what to expect – and did not want to make a fool out of myself. But, I should not have been so bothered; Iva had the most chilled crew. Boat owner Zvonko was warm and welcoming, while captain Luka was happy to teach us all how things worked and teammate Martina, well she took to sailing like a fish to water (pun intended!) and last by not least, Iva’s son, Ivano.

This is the type of event kids can join in on, I mean so long as they are like Ivano and can watch out for the swinging mast and sit around for a few hours (Ivano had his book and sat with his mum like an angel). In 2019, I’d like to take Vladimir, or Little Donkey, with us – he would love it for sure – but I can’t imagine him being as patient as Ivano was for how long we took to cross the finishing line. 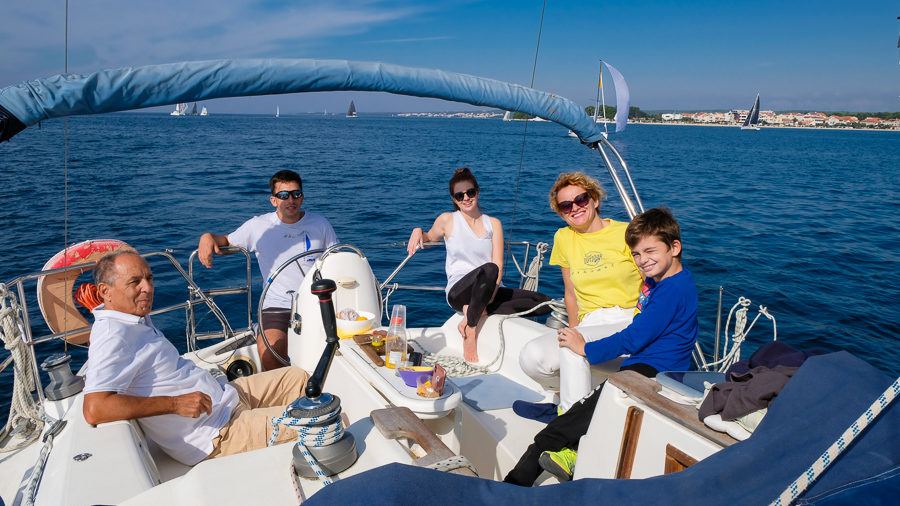 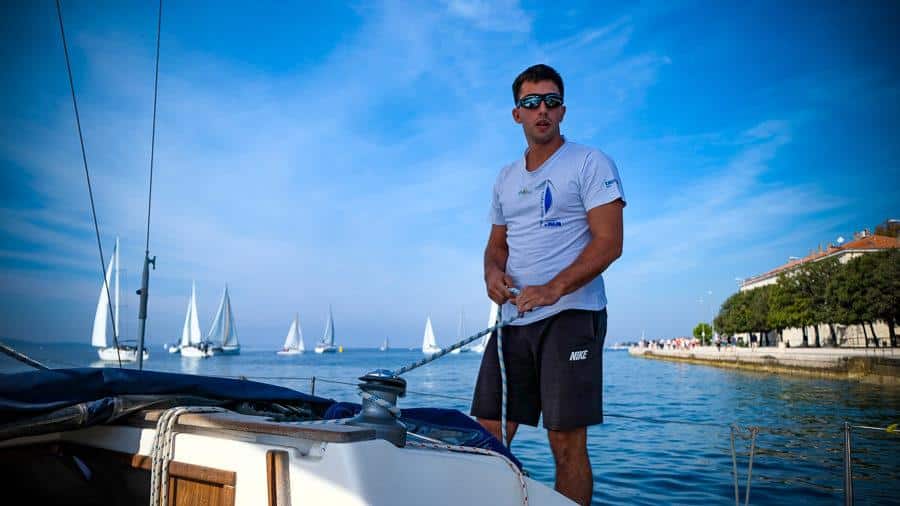 I will not lie; I think that I helped for less than 5 minutes of the whole regatta; I was far too busy taking photos and being mesmerized by the sails passing me by.  Whoopsie, sorry guys, I promise to do better next year. 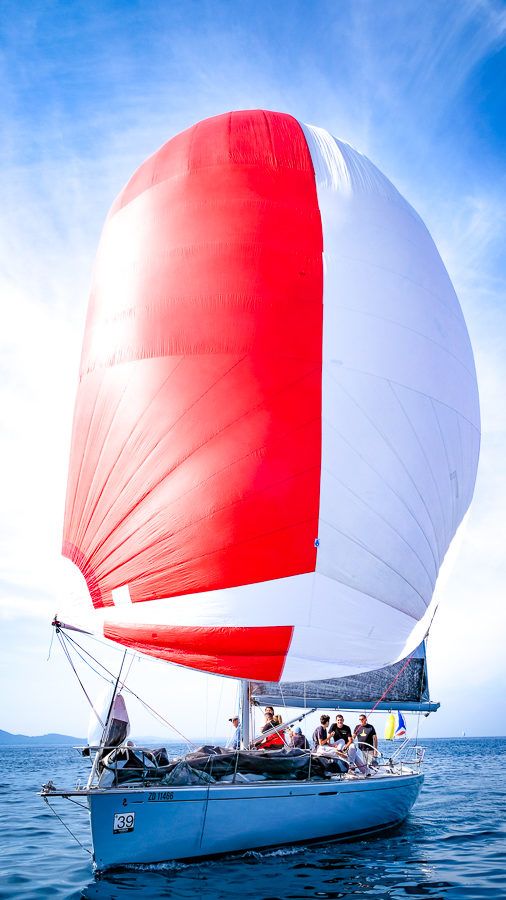 We came, almost last, but who cares – we had a blast, and no one was bothered about being on the water till 5 pm. We landed ashore hours after the winners had crossed the lines, yet we still had time to sit back at the dock and down a beer and a bite to eat and smile about the days’ events.

Short History Of The Zadarska Koka 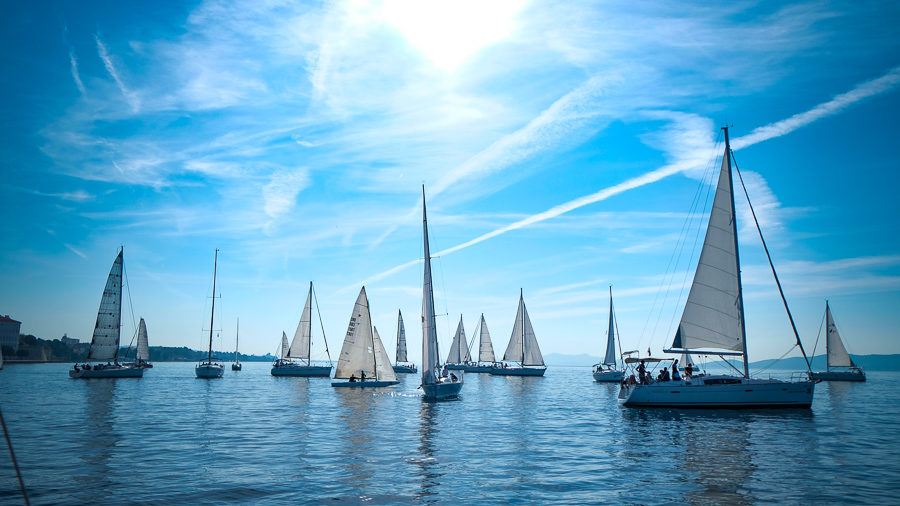 The Zadarska Koka gets its name from a 15th-century merchant ship, the “coca” or Spanish carrack ship. This type of masted ocean-going sailing ship was widely used to transport various goods at that time, its round hull boasting a huge cargo capacity.

The Zadar Koka regatta pays homage to that golden age of sailing, as well as Zadar’s and Dalmatia’s long sailing history. It has taken place for 14 consecutive years now, having grown into a thriving local tradition.

What To Expect From The Zadarska Koka Sailing Regatta? 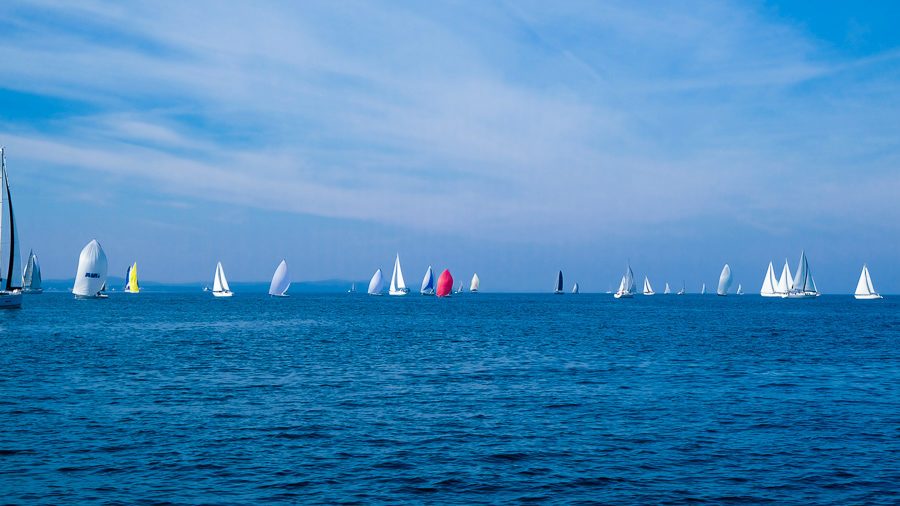 Nowadays, the Zadar sailing regatta welcomes all kinds of sailors, whether recreational or exceptionally competitive, to participate. In fact, the organizers, JK Uskok, invite everyone who owns a sailboat to join them in the Zadarska Koka. It is meant to be one big sailing party.

One thing that I found extra special was that this year, even if people did not have a boat (like me!), you could leave a message on their Facebook page, and they promised to try to find a vacant spot on one of the participating boats. 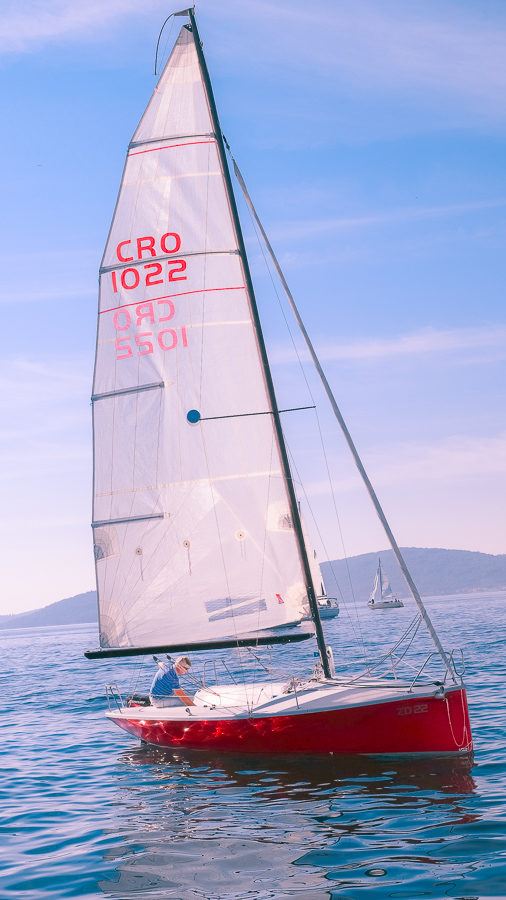 This year, event organizer Jakov and his team found places for 60 boatless parties across 82 of the participating sailboats. The time and effort that must have taken astounded me – more so, given the fact that the regatta is free to enter. Yes, no charge to register or sail.

If you’d rather stay on land, you can absolutely do that as well. Simply pick a spot anywhere on the Zadar waterfront, which extends all the way from the famous Sea Organ and Greeting to the Sun at the northwestern tip of the Old Town’s peninsula to popular Punta Baljo Beach in the southeast.

The entire route of the sailing regatta in Zadar is designed so that the ships are always visible from the waterfront. On the way, the ships must make two rounds passing by the waterfront at a distance of only ten meters. Therefore, you have a guaranteed close-up view of all ships, no matter where you are along the waterfront. 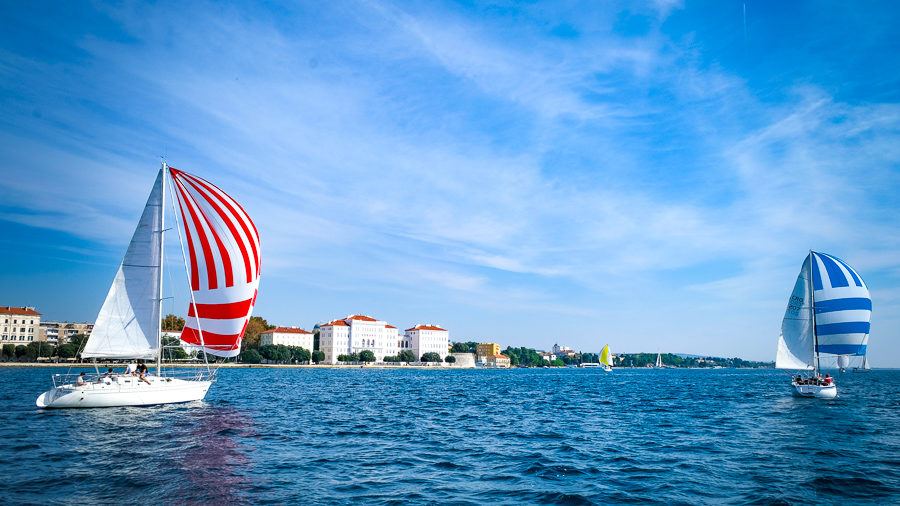 In 2018, the ship “Molo Longo” with Rajko Kujundžić at the helm won the race, while the teams of Furios and Fly 4 finished second and third. Winning captain Rajko Kujundžić, incidentally, also won the Viška and Mrduji regattas, two other major sailing races in Croatia, earlier this year.

Although it was not a record-breaking year like 2010, when 96 teams competed, there were 82 sailboats in the regatta – even though the Biograd Boat Show was on the same weekend.

This put 2018 into the top three of most-participated-in Zadarska Koka sailing regattas. When looking at the stats over the past fourteen years, that number of participants has increased dramatically since the first edition – so bring on 2019 – let that be a record-breaking number! 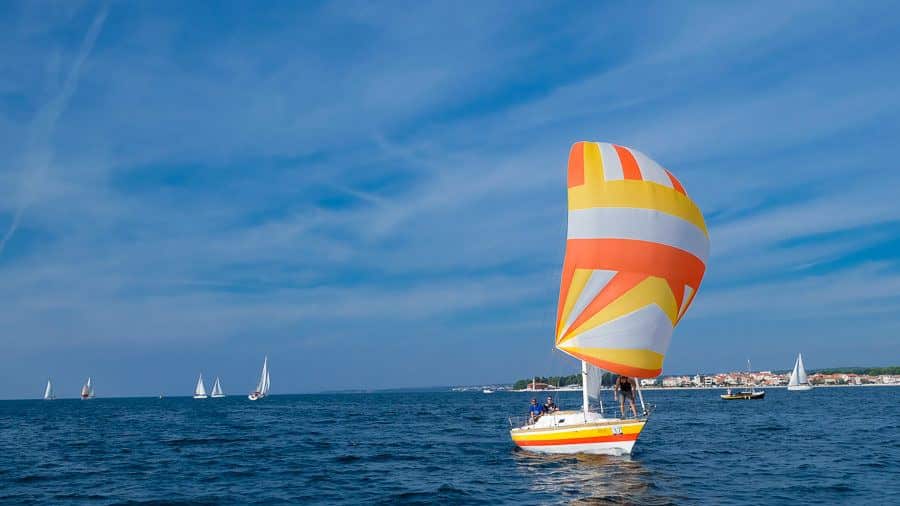 The Zadarska Koka takes place on an October weekend, usually toward the end of the month.

The event starts on Friday at 5 pm with the registration of participating teams and crews. Then, on Saturday at 11 am sharp, the race kicks off at the Zadar waterfront. You can expect the first boats to start crossing the finishing line around 1-2 pm.

Then, after all the boats have arrived and the sails are lowered, the party starts. The winners are announced, and a huge celebration takes place. Music, food, and drinks are the perfect finishing touches to the Zadarska Koka.  If you happen to be visiting Zadar during this weekend, make sure to go and check it out – best of all, it’s totally free.

This is a brilliantly organized event, and I hope to join the Zadar community in 2019 to watch it break the record. 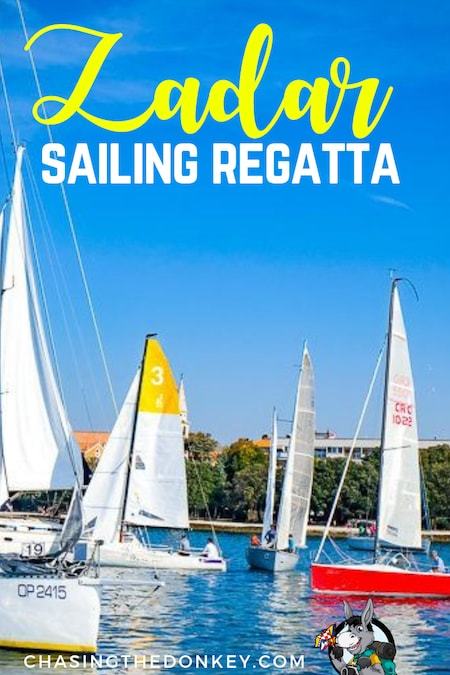