Written by Daniele & Elena from Cycloscope.

Azerbaijan is certainly not a popular tourist destination. This small Caucasian country, a former Soviet republic, is rarely mentioned by the media, and even when this happens, it is often about the harsh dictatorship. Most people will have trouble answering the question, what is Azerbaijan known for?
That being said. However, some amazing hidden gems in this country make visiting Azerbaijan absolutely worth it. Among those places to see in Azerbaijan, the one that shines the brightest is undoubtedly the ancestral village of Xinaliq, one of the top Azerbaijan destinations.

Xinaliq (also spelled Khinalug, Khinalugh, or Khinalig) is a remote and picturesque village situated in the northeast of the country, on a bare and rough mountaintop, surrounded by grassland and the high peaks of the Greater Caucasus. With an altitude of 2,350 m, Khinalug is the highest settlement in Europe and one of the oldest continuously inhabited places in the whole world; its origins indeed date back as far as 5,000 years ago.
The houses of Xinaliq are almost entirely made out of stone. The dry walls built with flint from the nearby stream are topped by flat roofs, which serve as terraces for the houses above. Needless to say, this is one of the most beautiful places in Azerbaijan.
For many years, until very recently, the people of Xinaliq had to survive only on what this bleak land provided them: stones for building, animals for food and clothing, and manure for heating.
Indeed many walls made out of compressed and dried dung-bricks are scattered around the village, often used as fences. This dung is used as fuel for the stoves to keep the dwellers warm during the harsh and long winters (but don’t worry, they don’t stink), and ecologic and economical way to light a fire in a place where even wood is very scarce.

The People Of Xinaliq

Fire. This primary element has indeed a high significance for the people here. Although all of them affirm to be Muslim nowadays, the roots of Kinalugh dig deep in the origins of the Zoroastrian cult, a monotheistic pre-Islamic religion of ancient Persia founded by Zoroaster in the 6th century BC, which consider fire as the purificatory element. This is indeed one of the most interesting things about Khinalug, more about this below.
The people of Xinaliq belong to one of the many ancestral Albanian tribes, ethnic groups of the ancient Caucasus, each of whom speaks its own unique language.

How To Get To Xinaliq Azerbaijan

The uniqueness of this village has been preserved by its location and by the fact that there was no road at all to get here until 2006. Nowadays, a winding and spectacular mountain road (one of Xinaliq attractions itself) have been paved from the nearby town of Quba. This road is one of the greatest Azerbaijan places of interest, providing a huge boost to Azerbaijan tourism.
Reaching Quba from Baku is easy; just take one of the many buses (about 1 per hour) from Baku’s main bus station; the trip takes around 2 hours.
Once in Quba, there is no public transportation to Xinaliq, and the only option is to join a tour or agree on a price with one of the many private drivers that will basically assault you once out of the Quba bus station.
The distance from Quba to Xinaliq is about 50 km, but the road is very steep and demanding, and it takes about 2 more hours to get there (even more if the driver decides to stop for lunch, which he most certainly will do unless you complain hard). Arrange also a pickup time to get back down to Quba, or you’ll be likely forced to hitchhike.

What To See In Khinalig Azerbaijan

Despite being a tiny town inhabited only by about 2,000 souls, there are quite a few things to do in Xinaliq. First of all, and pretty obvious, is exploring all the village roads, walk around the meanders of this small village which nevertheless looks like a maze.
There are very few tourists in Xinaliq, which ironically makes it one of the best tourist places in Azerbaijan, so you’ll be able to see the local dwellers busy with their everyday chores, making wool, cooking, bringing water up from the river, and all the traditional activities that are basically unchanged since millennia, making you feel like you traveled in time and not just in space.
If you are lucky, you might stumble upon one of the frequent celebrations featuring music and shashlik.

A few hundred meters from the village, there is a cluster of graves whose origin is still enveloped in mystery. Some of these graves are thousands of years old, very primitive slabs of stone, while some have inscriptions in the ancient local alphabet.
No archaeologist studied these tombs yet, and there seems to be no maintenance at all, besides what the locals themselves occasionally do.

Being set in the middle of gorgeous mountains, Xinaliq is a perfect hiking base to explore the Greater Caucasus. Several hiking trails depart from the village, short ones and long ones. For the longer ones, a guide is required, but your guesthouse should be able to arrange that for you.
Among hikers and outdoor enthusiasts, Xinaliq is one of the top places to visit in Azerbaijan. While Azerbaijan as a tourist destination isn’t prominently present on many people’s radar, it’s already becoming increasingly popular in the outdoor culture.

As already mentioned above, even though the villagers are allegedly Muslim, many still practice the ancestral Zoroastrian cult. In Khinalig, there’s indeed a fire-worship tower called “Atashgah” among the local mosques.
Like its counterpart near Baku, one of the best cities in Azerbaijan to visit, this tower indicates a place where natural gas emissions seep out of the ground, burning eternally without producing any smoke. Visiting this extraordinary place is one of the must things to do in Xinaliq, even on any adventurous Azerbaijan vacation. 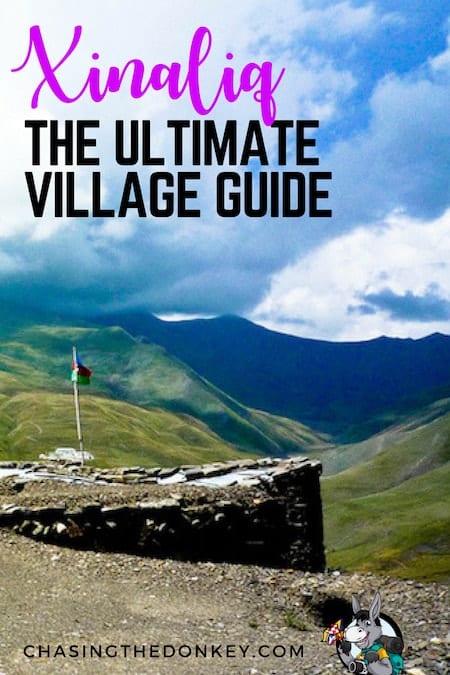 The Mosques Of Xinaliq

Mosques in Xinaliq may go unnoticed to an inattentive visitor. They look like large houses without any minarets or domes. The Joma mosque is the largest, and it was renovated in 1968. The mosque in the Gamk quarter has a curious feature, a narrow room called “zulmatkhana,” where a sinner would spend time there in order to be relieved of his wrongdoings.

Where To Stay In Xinaliq

Luckily, there are no hotels in Khinalug to ruin the atmosphere of the village, just a few guesthouses. Those will be pretty basic accommodations, but they will give you the chance to cast a glimpse over the local household lifestyle.

There are no restaurants in the village, only a small shop that is often closed and doesn’t sell much anyway. The guesthouse will arrange your meals; if you are vegetarian, you’d better bring your own food since there’s not much in terms of veggies up there.
So tell us, are you planning to visit Azerbaijan?
Share