Things To Do In Oradea, Romania For The Weekend

Home > Things To Do In Oradea, Romania For The Weekend

Things To Do In Oradea, Romania For The Weekend

According to legend, the city was founded in 1092 by Ladislaus I, King of Hungary, who was buried in the city’s cathedral after his death.

The first historical attested documentation dates from 1113, when the city was mentioned in a chronicle of the benedictine monks from the monastery of Zobor. The city flourished and became an important center of pilgrimage in 1192 when the founder of the city, Kind Ladislaus I, was Sanctified by the Pope.

Since those times, the city already had a multicultural background with several ethnicities living side by side: Hungarians, Slavs, Vlachs, Italians, Germans, and others.

By the Mongol invasion of 1241, Oradea was one of the most important cities in the Kingdom of Hungary. The city was destroyed during the attack but was steadily rebuilt and peaked during the XV when it becomes the favorite city of Sigismund of Luxembourg, Holy Roman Emperor, who was eventually buried in the city’s cathedral.

The city was an essential center of Protestantism during the Reformation of XVI. century and Counter-Reformation that followed.

Oradea was eventually occupied by the Ottoman Turks after a long siege in 1660 when less than 800 heroic defenders managed to keep a vast Ottoman army at bay for 40 days.

The city was liberated in 1692 by a Hapsburg led German, Hungarian and Croatian army.

After the 1867 creation of Austria-Hungary, the city flourished again and became the second most important city in the Hungarian part of the Empire after the capital Budapest.

In this period, the city went through a fantastic transformation, most of its current central area being developed during the last three decades leading up to the First World War.

After the end of the war, the Treaty of Trianon awarded the city to Romania, its forces entering the city in 1919.

Between 1940 – 1944 Oradea was again awarded to Hungary by the Second Vienna Award.

Finally, in 1944 the city became yet again part of Romania as it is today.

After the 1989 fall of Communism, the city went through a rapid development process; today is one of Romania’s most prosperous cities.

Given its rich and multicultural history, there are many exceptional sites to visit and a whole lot of attractions and activities for one weekend getaway in Oradea.

If you’re wondering if Romania is safe to visit? Don’t worry, Oradea might be one of the safest cities in the country.

Thus, here’s my perfect 2-days itinerary for a weekend in Oradea. 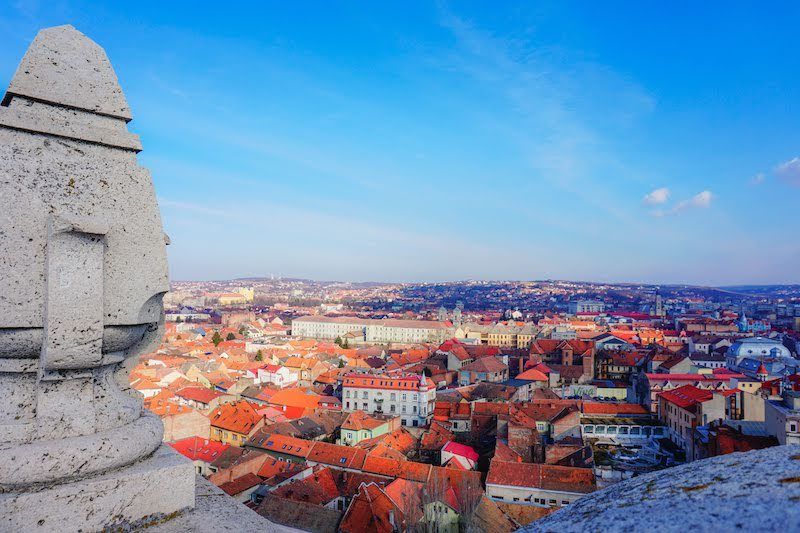 Book a stay in the heart of the city at one of the two hotels on the river (Continental Forum, DoubleTree by Hilton), or at the Ramada hotel, where you’ll have the chance to experience their famous wine spa.

Start your day with a walk at the Roman-Catholic Basilica, one of the largest and most impressive Baroque-style buildings in Romania and the wider region. Next to it, the Episcopal Palace of the Roman-Catholic Bishopric is a beautiful palace built in the Viennese Baroque in the late 18th century. It has 365 windows representing the days of the year;

Cross the street and admire the Corridor of Canons (Sirul Canonicilor) – an architectural gem comprising ten buildings in a line. This place can quickly go on a list of the most Instagrammable places in Oradea. 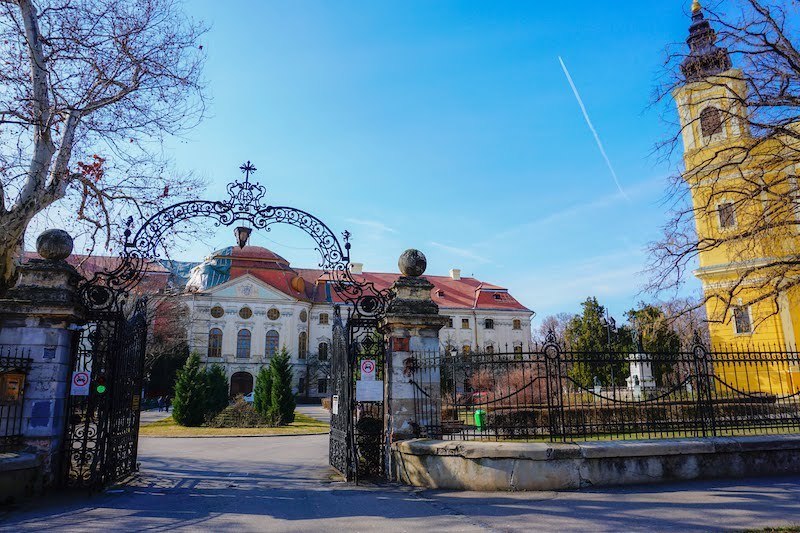 When you’ve had enough of architecture, take a walk and a breath of fresh air in the Petofi Park – an arboretum park hosting tens of types of trees and vegetation from different parts of the world.

If you choose to visit during spring, both the Episcopal Park and Petofi Park will be filled with magnolias in bloom.

Drink a delicious coffee at The Dripped and maybe have a late brunch to get ready for some more walking. 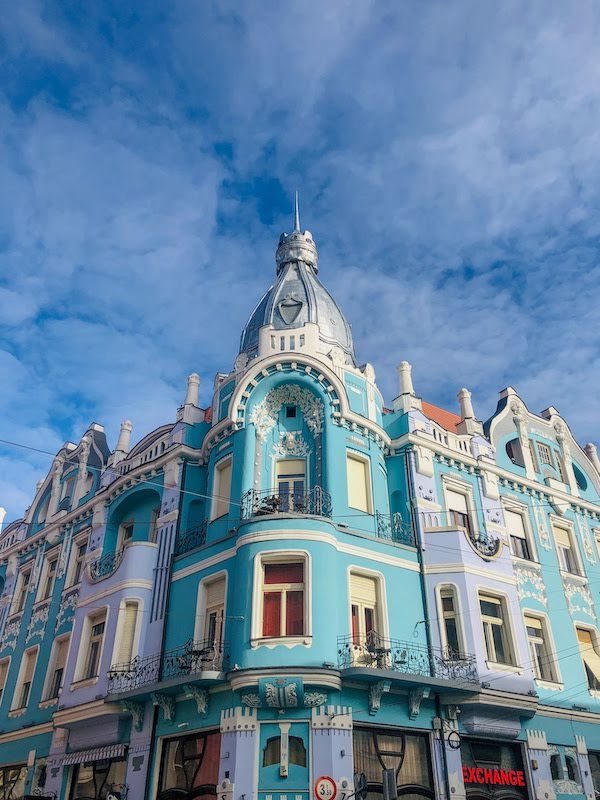 That’s because next to the Unirii Square, you can find the Neolog Synagogue, one of the largest Synagogues in the Central European region. After visiting it and learning about its history, you’ll want to head towards the City Hall Palace.

Across the square from the Black Eagle Palace, the City Hall Palace with its clock tower is not only another architectural gem, but it offers the possibility to climb its tower from where you can see Oradea from above, in all its beauty.

Cross the Crisul Repede River, admire the beautiful buildings on the left-hand side, Oradea’s National Theatre, and head towards the so-called Corso, or Republicii street.

This street will amaze even the most exigent visitors with its kilometers long line of Art Nouveau buildings and its excellent restaurants, terraces, and bars. Walking up the street, you’ll stumble upon the Moskovits Miksa Palace, one of the most beautiful buildings in Oradea, with its blue walls.
Finish your day off with a delicious dinner, and don’t forget to try the iconic gulas soup at Cyrano restaurant.

Today will be a mix of history and relaxation because nobody wants to spend all the time walking around, right?

Start your day with a stroll on the kilometers long riverfront, wherein the central section can admire dozens of types of blooming tulips and many other flowers and trees. Stop for coffee at Snooz Caffe, or wander around towards the Oradea Citadel.

The Medieval Citadel with its Cathedral, Princely Palace, and Museum will take a bit of your time to explore. But it will all be worth it, judging by its impressive history.

Once you’ve had enough of history for one day, cross the river back and go to the Nymphea Aquapark and Spa.

This place can offer visitors a fun day on the many waterslides and a relaxing day in its Thermal Turkish Baths and the Sauna area with different saunas (Russian, Finnish, Saline room, Aromatherapy, and so on). There’s not one time we visit Oradea that we don’t spend at least a few hours here.

What Else To Do In Oradea 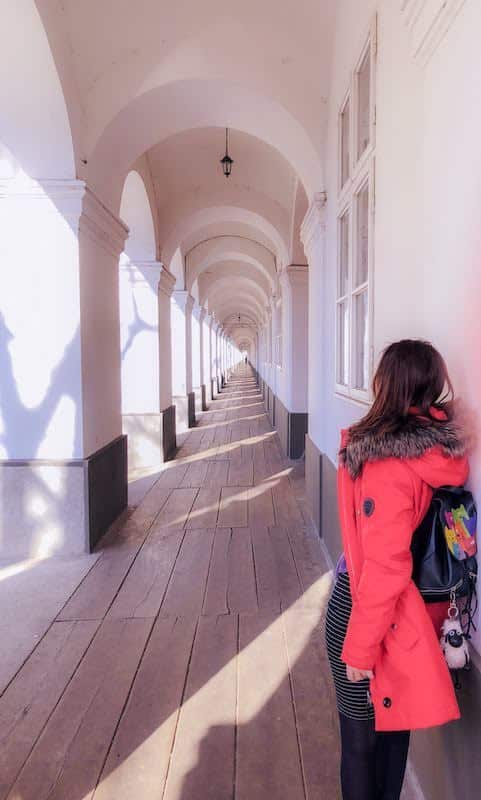 For those looking to spend more time in Oradea, here are some other activities to put on the list: