Ričet is a dish made of beans and barley, traditionally prepared with some kind of smoked meat, such as ribs, or sausages and bacon. However, this name has become familiar in Croatian cuisine, so barley itself is often called ričet. 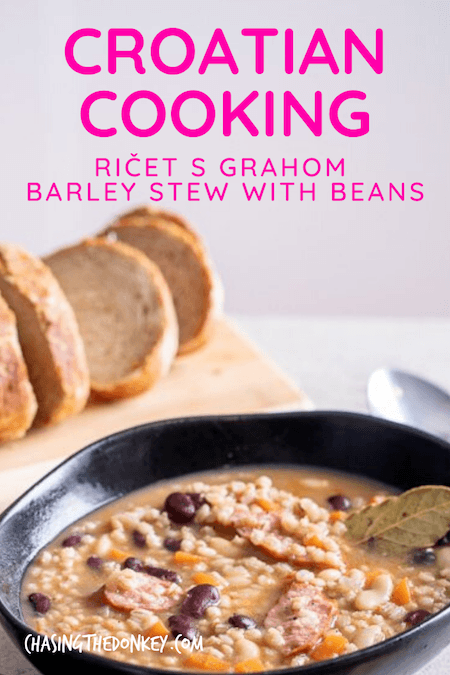 This generous and really comforting meal is most often prepared in winter and would not exist without barley. It is a purpose that has nourished many large and small cultures – from Ethiopians, Egyptians, and used by the ancient Chinese for ten thousand years. The Egyptians were the first to use barley to make beer and barley malt, and in China, it was a symbol of manhood and strength.

Even Greek athletes and soldiers ate porridge and barley bread, which made them so powerful. The most interesting historical fact comes from the martial arts arena – the ancient Greeks often called hordeers – ‘those who eat barley’!

In Croatia, it’s considered a “poor food” as it used to be made in the villages and by families with lots of members. Nowadays, it gets its deserved attention, so you can even find it in the restaurants in the inner parts of Croatia.

This Croatian barley stew with beans recipe (Ričet s Graham) is a really comforting meal is most often prepared in winter. It used to be considered to be a “poor persons food” as it used to be made in the villages and by families with lots of members. Now-days it gets it’s deserved attention so you can even find it in the restaurants in the inner parts of Croatia.

Add a large tablespoon of ajvar at the end for more flavor!