Best Things To Do In Baku, Azerbaijan

Home > Best Things To Do In Baku, Azerbaijan

Best Things To Do In Baku, Azerbaijan

Baku lies on the shores of the Caspian Sea, and the capital of Azerbaijan is a city that has been made rich from the oil that seeps from the ground around it. It’s a city unlike anywhere else in the former Soviet Union, a place where Persian and Turkish cultures mix with Russian, European and Soviet influences before merging with the distinct eccentricities of modern Azerbaijan.

Baku is a city where the culture and history of Azerbaijan can be seen preserved on the narrow, winding streets of the old city, but a city where it’s clear that new money is being thrown into lavish, elaborate projects that leave visitors surprised and bewildered by their scale and grandeur. Flaming skyscrapers light up the skyline while extravagant carpet museums and architecturally surreal cultural centers are designed to impress. Just like the ancient town of Xinaliq, it’s one of Azerbaijan’s many eye-opening surprises. 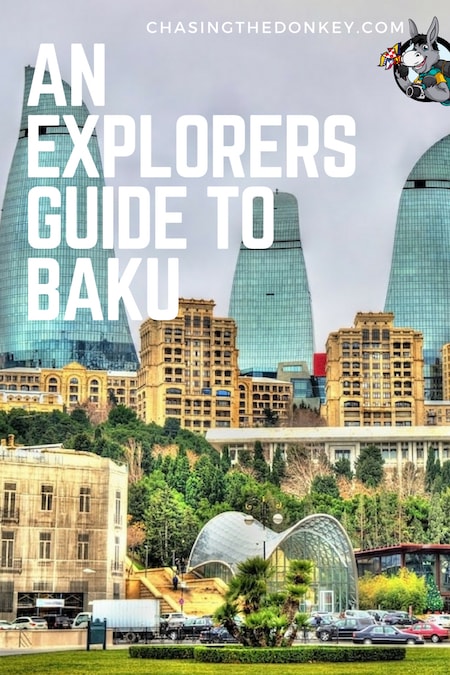 It’s an unreal city, a city that’s both strangely new and archaically historic. Its center is dazzlingly clean, the buildings are polished to glint in the sun, yet there is always something more left under the sparkling exterior of the city just waiting to be discovered.

It’s a city that never fails to intrigue, and here are the best things to do in Baku.

Stroll The Streets Of The Old City 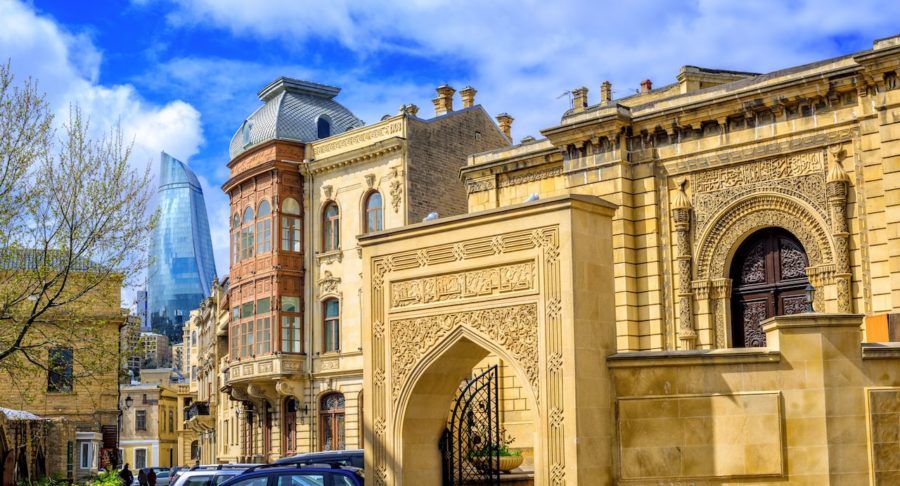 The narrow, winding, sun-bleached stone streets of the Old City are the place to start any trip to Baku. Known locally as the Icheri Sheher – the inner city – this is the historic heart of Baku, where defensive walls stand high on the shores of the Caspian Sea, and royal palaces are hidden amongst the cobbled roads.

The Old City is just a few square kilometers meters in area and is home to only a few thousand inhabitants, but people have lived here for centuries, and it is from this inner-city that the rest of Baku grew into the metropolis it is today.

To learn more about the Old City, book this guided private tour.

Visit The Legacy Of A President At The Heydar Aliyev Center

Heydar Aliyev is, to some, a dictator, to others a national hero. In Azerbaijan, it’s impossible to escape his likeness. He was the first President of independent Azerbaijan – he also held the title of First Secretary of Azerbaijan under the Soviets for a while, too – and his son became the current President after he passed away in 2003.

The Heydar Aliyev Center is his lasting legacy and tribute, a distinctly curved and elaborately designed building that pays tribute to the Aliyev dynasty while hosting art exhibitions, performances, and forums. 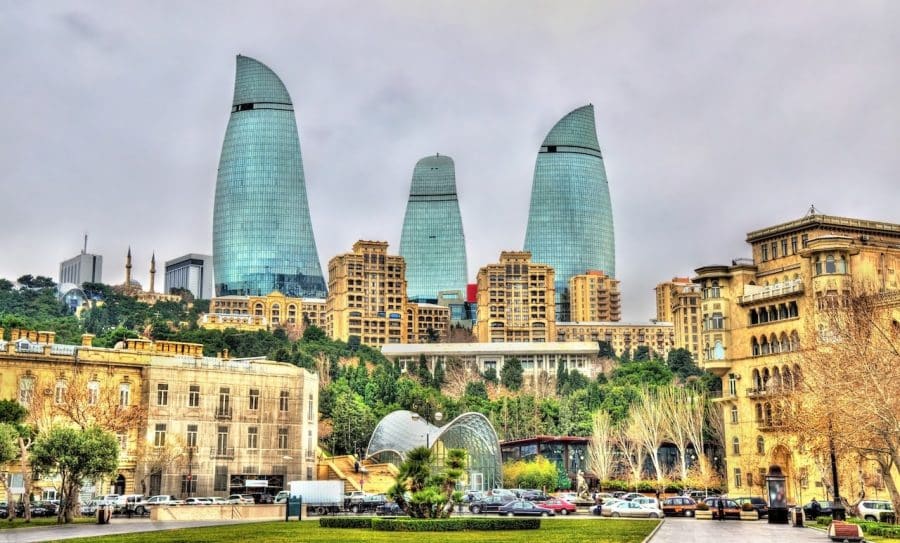 From the Old City and anywhere else in Baku, the three Flame Towers dominate the skyline. In stark contrast to the ancient walls of Icheri Sheher, the Flame Towers are the modern symbol of Baku’s wealth and eccentric spending.

These three towers are the tallest buildings in the country and are literally shaped like flames. They are the vibrant scene of light displays at nighttime, which turn these towers into blazing, luminous flames of LED lights.

Book this tour to find the best panoramic view of Baku at night.

The Baku Boulevard is a sweeping seafront walkway that stretches uninterrupted for miles along the Caspian Sea. It’s a windswept but cooling walk in the otherwise arid Baku climate, and its polished floors are sparklingly clean, and its multitude of small parks and green areas are always perfectly trimmed.

There are a few bizarre sights to stop at along the way, including the elaborate Little Venice, a small-scale replica of the canals of Venice with operating gondolas that’s open for short rides, and the vast, oversized Azerbaijan Carpet Museum – a museum actually shaped like a carpet and housing the largest number of Azerbaijani carpets found anywhere in the world.

In the deserts that surround Baku is an exciting and unusual National Park. Gobustan is where Azerbaijan’s Mud Volcanoes can be seen.

A place where mud seeps and bursts from the ground in spectacular fashion, it’s a strange phenomenon that can be seen in very few locations worldwide. Gobustan National Park is also the site of an interesting archaeological museum and some finely preserved Petroglyphs, which are found engraved on the side of rocks and now preserved in the boundaries of this protected area.

You can reach the National Park from Baku by booking this private guided tour.

The Baku Fire Temple is an old Zoroastrian temple that was used for religious ceremonies and fire worship for centuries. Baku is built on oil and natural gas, and at many points around the city, uncontrollable fires rage when those gases are lit.

At the Baku Fire Temple, one such flame was lit for hundreds of years until local gas extraction companies used all the local reserves up. Now the temple is a museum, and although the flame is fed by gas piping, it’s an interesting look at the traditions of an old Baku culture.

I recommend exploring the site with this private tour to fully dive into the history of this Fire Temple.

Although now dwarfed by the three flame Towers and countless other skyscrapers, the Maiden Tower – found overlooking the old city – was once the tallest tower in Baku. It dates back centuries and was built to stand guard over the Caspian Sea.

Over the years, it has collected legends and stories and become famous in the annals of Azerbaijan’s history. Today its circular, stone staircase can still be climbed to the top for views over the surrounding old city and out to sea.

See The Second Tallest Flagpole In The World

At the far end of the Baku Boulevard is the National Flag Square, home to the world’s second-largest flag pole. The flagpole reaches 162 meters in height, and at certain times a huge Azerbaijani flag is flown from it – although not always.

When it was first constructed, this was, in fact, the tallest flagpole in the world. Then, rival post-Soviet nation Tajikistan decided to build a flagpole reaching 165 meters in height just to claim the title. They even used the same giant flagpole construction company to build it.

Visit The Palace Of The Shirvanshahs

Another historical sight also found within the walls of the Old City is the Palace of the Shirvanshahs. This extensive palace is a maze of chambers, walls, guardhouses, and vaults that once formed the home and fortress of the Shirvanshahs, Baku’s leading rulers. It’s now part of a UNESCO World Heritage area and an important cultural and historical museum.

The Museum Of Miniature Books

Hidden away in the maze of the Old City is the intriguing Museum of Miniature Books. This small, old building is the world’s only museum dedicated in its entirety to miniature books, and somehow it ended up in Baku, Azerbaijan. The museum holds small books from all over the world, including books that are so tiny that a magnifying glass is required to read them.

Where To Stay In Baku

Once you’re done exploring Baku, check out another nearby, off-the-beaten-path destination – Nakhchivan.