Expat Adventures In Charcuterie In Croatia With A 175Kg Pig

Home > Expat Adventures In Charcuterie In Croatia With A 175Kg Pig

Expat Adventures In Charcuterie In Croatia With A 175Kg Pig

I’ve long had a fascination with charcuterie. It’s because it’s always been part of my life. I grew up eating prosciutto, mortadella, coppa, and other various salami and sausage.

It also stems from watching my father back in Australia make sausages with his best friend for hours. They would hang them in the garage over chairs and set up the pedestal fan to dry them out. Why a fan? Well, the warm climate in Sydney is not exactly suited to air-drying sausages, like it is here in Croatia.

In any case,  the sausages would always turn out great, and we would fry them up with eggs as soon as we could. Back in those days, I would go to school with my sandwich overloaded with coppa, and the other school kids would look at my sandwich and wonder what the hell I was eating. Some of the kids would ask “, what is that on your sandwich?” and I would tell them, “coppa.” They’d look back at me strangely. I would then have to explain that it’s not the reddish-orange metal they were thinking of, but a type of cold meat.

Now it’s the complete opposite; those same perplexed kids are now debating why Iberico Jamon is far Superior to Parma ham. Ahhh, how the world has changed.

I figured that because I loved eating something so much, the natural progression for me was to try and make it myself – just like my father had done for the many years before he passed away. When we moved to Croatia, one of my (many) goals was to start making my own charcuterie. A couple of months ago, I asked my cousin to help me procure a pig to realize this goal. 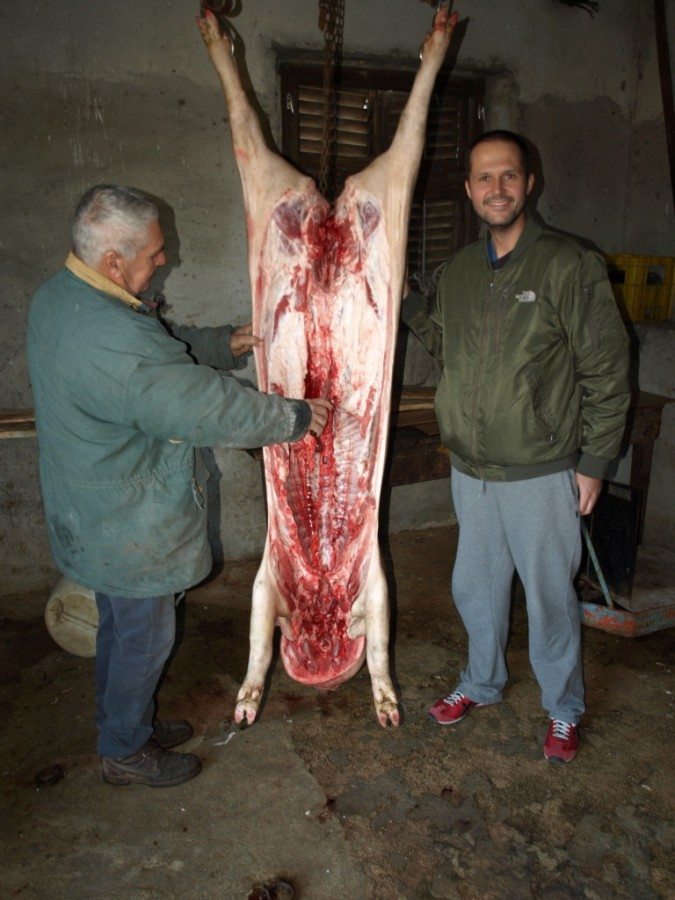 Here in my village, you can’t just order any old pig; you need to know who to trust. So my cousin organized a locally raised pig for me. He lectured me on the importance of buying a domaci (domestic) pig because the quality of the meat is much better, and quite frankly m,y family will never buy any food from an untrusted source. They take food very seriously!

Having found the perfect pig,  raised by a local farmer that only produces a handful of pigs per year, I was excited. These pigs live on a diet of food that is grown by the farmer and not pellets produced in a factory in China.

On my most recent trip home, we decided it was time to make the Prsut. Well, It wasn’t really time; however, the anticipation was killing us. A call was made, and the pig was slaughtered, ready for us to pick up the following day. Early in the morning w,e went to the nearby farm to pick up the pig, and as we arrive, I can see the pig hanging in the makeshift slaughterhouse.

The beast was huge!

We soon realize that we need to reduce the pig’s size as he’s too big to handle and fit in the back of the little Citroen. We chop off the pig’s head, split it in half, and head home. I was buzzing with excitement, and it was only 8 am.

Once home, we set up the table where we will butcher the pig and get underway. Thankfully for me, my Uncle & Cousin knew what to do. I was clueless.  Mrs. CtD comes rushing on out, bringing with her the Baby Donkey for him to help with the butchering. He was none too pleased.

Little by little, the pig is broken down into various cuts—the loin, neck, pancetta, legs for prsut, and so on. What I loved was that nothing went to waste. We placed all of the meat offcuts to one side, ready to be used in the sausages. The fat was diced into small pieces, and we made lard for cooking.  Each of the bones we placed in the freezer to be used for soups and stews throughout winter. We even broke the enormous head into smaller parts.

What about the organs? Well, while the butchering was happening m,y Aunt had collected the pig’s lungs, liver, and heart and made a stew for lunch. This type of stew needs to cook for some time, and it was ready just as we finished with the big chop. The stew is served with polenta and is delicious. All that butchering requires a hearty lunch to give you energy. Because after lunch, we move onto stage 2.

Once the butchering is complete, lunch is eaten, we now begin the preservation process. Salt, smoke, and cool, dry air are all that’s required. This is how it has been done for generations. Primarily out of necessity as it wasn’t that long ago when there was no refrigeration.

How Is It Done?

First of all, you get rock salt, kilos and kilos of it,  and massage it into the meat and bones. Then you place the various cuts to lay in the salt for different lengths of time-based upon their size and what they will be used for.

Once out of the salt, they are smoked in the little outdoor kitchen known as the crna kuhinja{black kitchen}. After that, it’s up to Mother Nature. She needs to provide us with a wind known as the bura. The bura is a cool and dry north-easterly wind & without it, the prsut will spoil. That cold, dry wind dries the meat out to perfection.

The items will be drying for various time frames, from a couple of months for the sausages to a year for the Prsut. A few months ago, we did a sausage experiment & fortunately for us, it was successful, and we were able to start eating these to tie us over.

I’ll keep you posted as you how the prosciutto turns out, but it’s not looking good at this stage. There has been lots of rain, no bura, and the warmest December / January on record. Unfortunately, it’s looking very much like the Prsut will spoil.