There seems to be a national holiday for everything these days, whether it’s smile day, friendship day, chocolate day, or anything else which crops up. Most of these holidays don’t have any bonds to the past; however, a handful of celebrations still exist to commemorate important pieces of history and culture.

On October 18th, get ready to celebrate Croatia’s biggest contribution to fashion culture – the necktie – on World Cravat Day!

History Of The Cravat Or Necktie As You May Know It

You might be thinking the necktie is purely a fashion accessory that doesn’t hold major importance in the world….but stop right there, the necktie is more than a decorative piece of fabric. It actually holds quite a bit of history in Croatian culture.

There are a few variations on the actual story, like most things in life, but all of them link back to Croatian mercenaries. Cravats were a part of the uniforms of Croatian soldiers. During the 17th century Prussian Wars, soldiers tied them into their collars to keep them closed. This original necktie was adopted and adapted into modern culture, becoming the fashion accessory it is today.

Of course, the alternative explanation is a little more romantic. It is thought that when a Croatian man was called away on business or readied for a dangerous journey, his wife/girlfriend/significant other would tie her scarf around his neck and collar, and he would leave it there to remind him of her love while away. 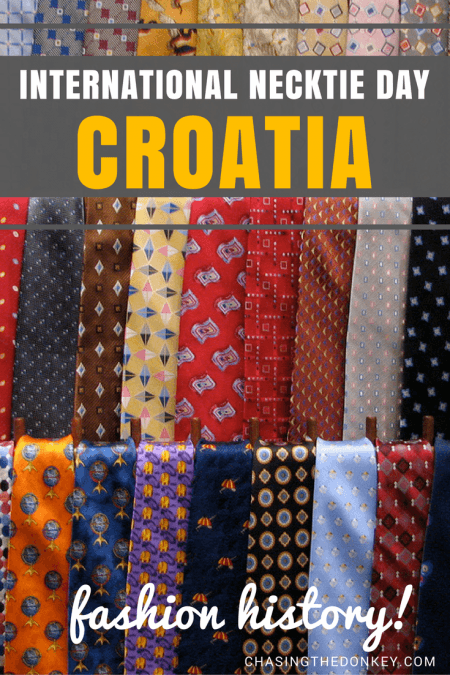 It’s also referred to as International Necktie Day or International Day of the Cravat. Now, while celebrating this piece of fabric is a relatively new trend (beginning in 2003), some pretty cool things have been done, like wrapping the Pula Arena in an 808-meter Cravat. The tie entered the Guinness Book of Records as the ‘biggest tie in the world.’ It weighed over 450 kg and used 120 km of rope to secure it!

There are celebrations worldwide, but most happen in the home of the cravat – Croatia. The day is important in Croatia’s cravat history, and perhaps in overall fashion history too.

FUN FACT: How to tie a tie